A State of Matter: Modern and Contemporary Glass Sculpture

A State of Matter: Modern and Contemporary Glass Sculpture

A diverting group exhibition makes the case for glass as an artistic medium, showcasing some bedazzling craft in the process 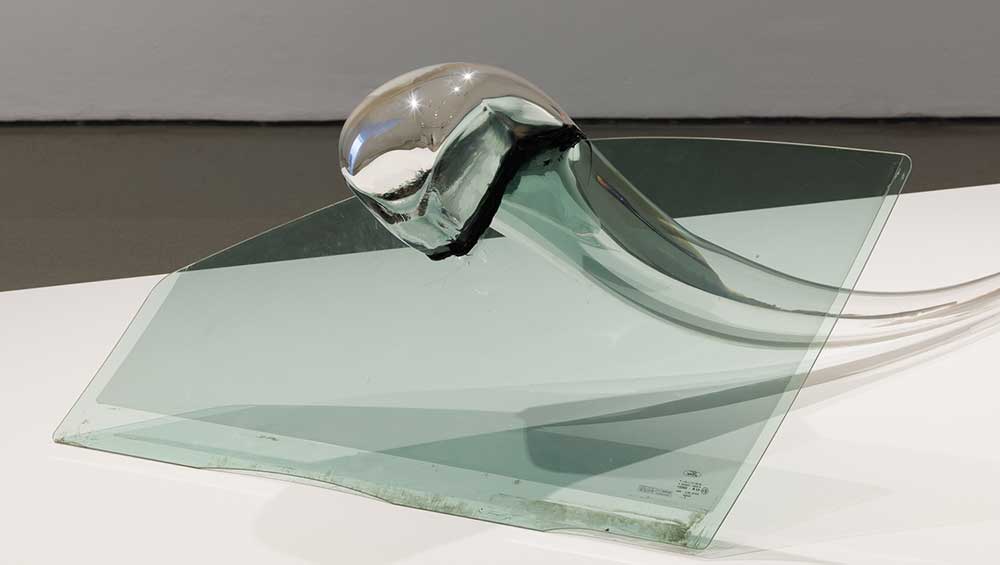 Glass has a long history in decoration: ancient Roman vessels, medieval stained-glass windows, the fantastical art nouveau perfume bottles of Lalique and the vases of Gallé. Its role as a material in fine art is more uncertain. The curators of A State of Matter, an exhibition of glass sculpture at the Henry Moore Institute in Leeds, do not beat around the bush. “Glass”, opens the exhibition guide, “is not a material readily associated with sculpture. Tainted for generations by an association with the decorative, the alluring properties of glass have to some extent been a curse; regarded as too aesthetically pleasing, too frivolous and beautiful to create anything of substance.” 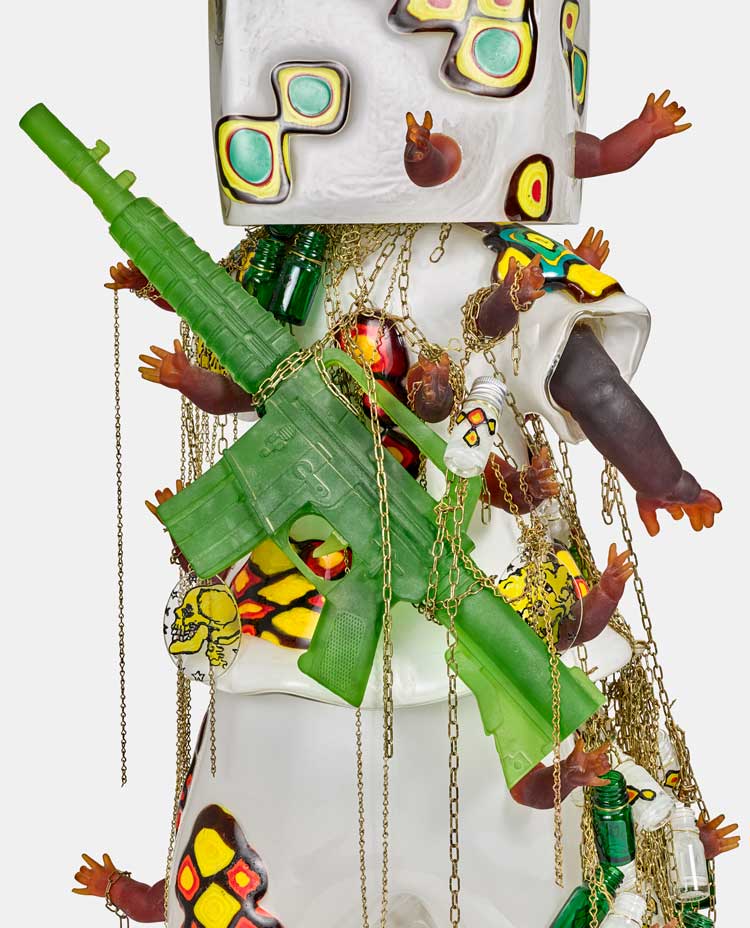 More unkindly, it could also be said that glass art often veers into kitsch. Modern glass art emerged in the 1950s, with foundries across Europe. Venice, and especially its island colony Murano, leveraged its glassmaking history to become a centre of the new glass art. The master glassmaker Egidio Costantini collaborated with Pablo Picasso, Lucio Fontana, Jean Arp and others. The sculptor Claire Falkenstein, represented at Leeds by three 1960s works, developed a new technique that fused glass and metal without causing the latter to melt. But for all glass’s legacy of modernism and experimentation – and, more recently, noble efforts by brands such as WonderGlass to reconcile cutting edge design to Murano glass – Venetian glass retains a pungent stench of bad taste. 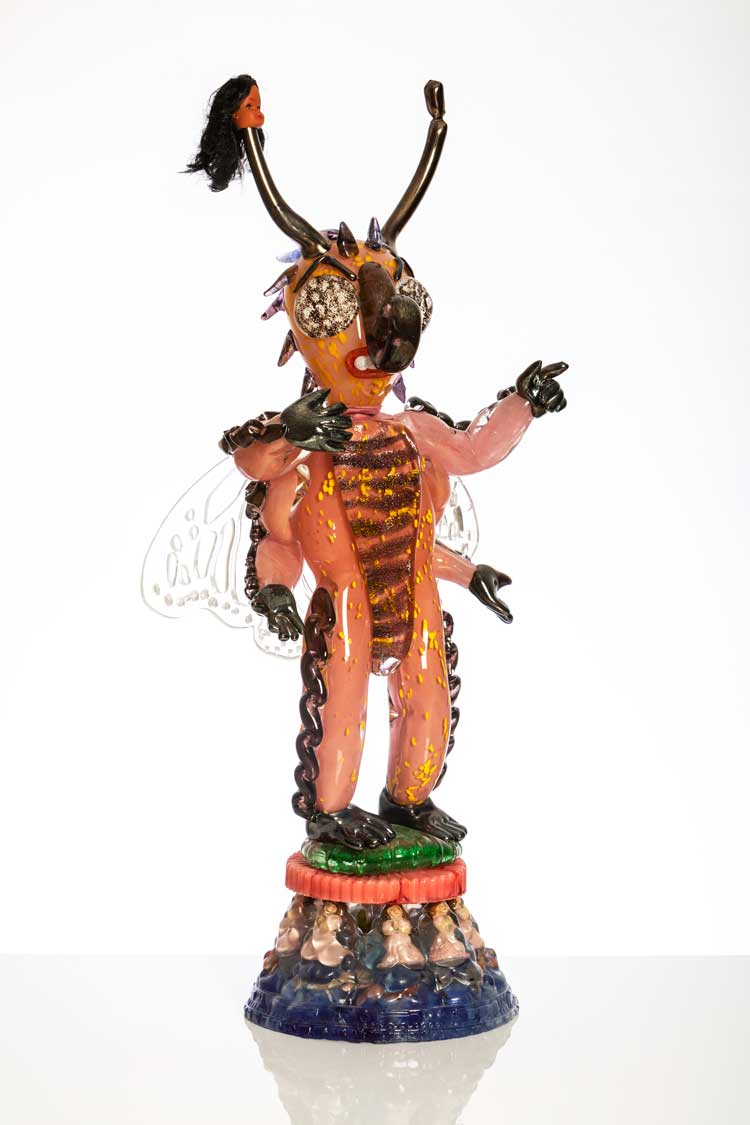 A State of Matter corrects this story. Organised to coincide with the United Nations International Year of Glass, it marshals works by 16 artists to shatter some common misconceptions about glass sculpture and art itself. Prime among the latter category is the notion that glass is a substance like any other. Glass exists in a variety of states. It begins with silica (silicon dioxide), the main chemical component of sand. Silica is mixed with other chemicals, then heated until it turns into a molten lava, which is one state of glass. It is then cooled down to become the firm, hard glass we see every day. But although glass behaves like a solid, it has a looser, disorganised structure.

Several pieces here deal with the ability of glass to straddle states of matter. Petr Stanicky’s terrifying Mirror-Mondeo Bite (2014) shows a car window being assaulted by a monstrous, sperm-like being of mirrored glass. One part is flat and functional, the other liquid and alive, a reminder that glass can be as mundane as it is a marvel. 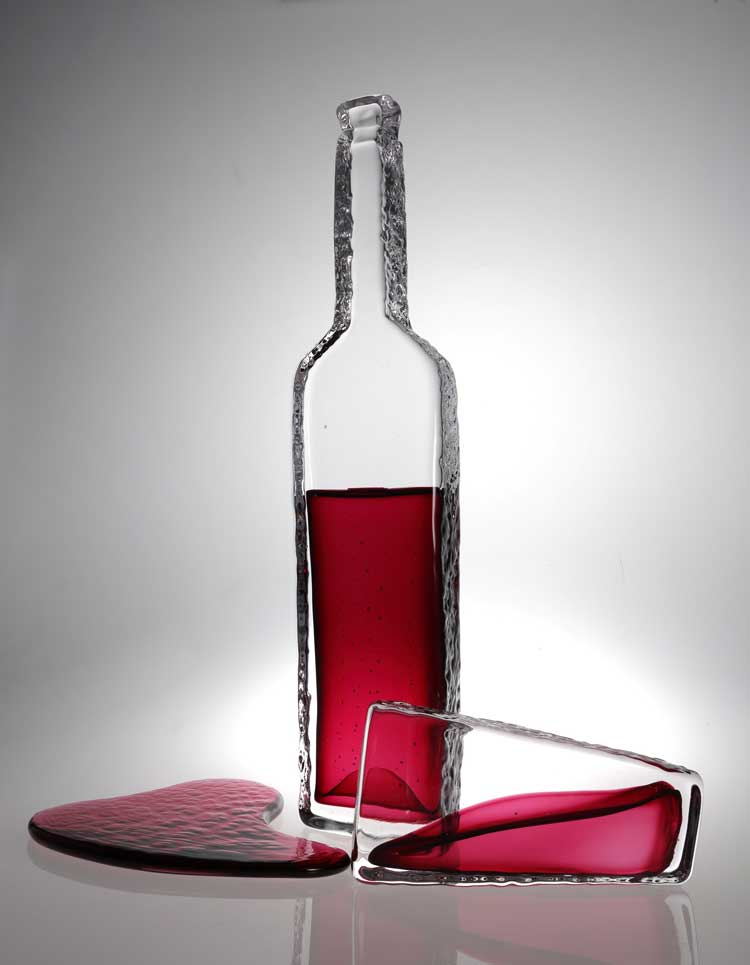 Another myth to be busted is that glass is fragile, weightless, barely there. Luke Jerram’s Glass Microbiology series (2004-) replicates pathogenic microbes – including HIV, malaria and the enterovirus EV71, which causes hand, foot and mouth disease – into elaborate sculptures. Sinisterly spiky, they also feel heavy and substantial, underscoring the real risks of the viruses and parasites they represent. They might also riff on the history of glass depictions of natural phenomena, most memorably represented by the Bohemian Blaschka family and their glass flowers and marine invertebrates. 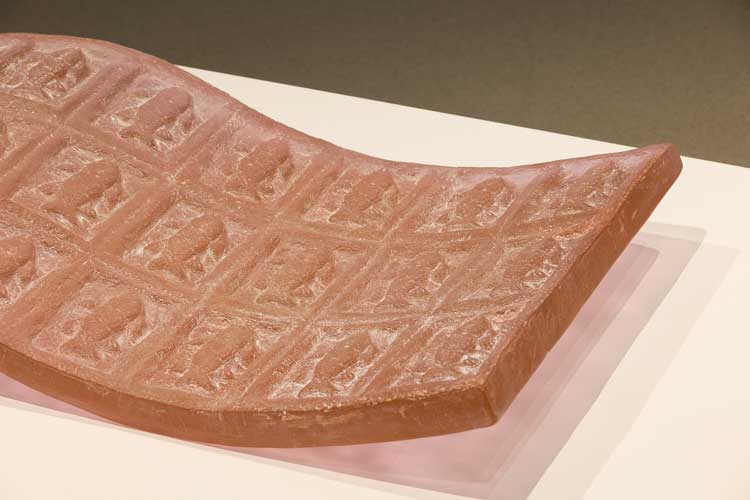 Alena Matějka’s Magic Carpets (2004), one with an abstract grid pattern and another decorated with fish, look as heavy as metal sheets. It is difficult to imagine them taking flight. Matějka bases her patterns on the stone architecture of Scotland and northern England, structures remarkable for their stolidity and perseverance. The largest of her carpets is the heaviest piece of kiln-formed glass ever made. Matějka maintains an interesting balance, embracing the luminous qualities of glass while working it so that it resembles a more conventional, opaque sculptural material. 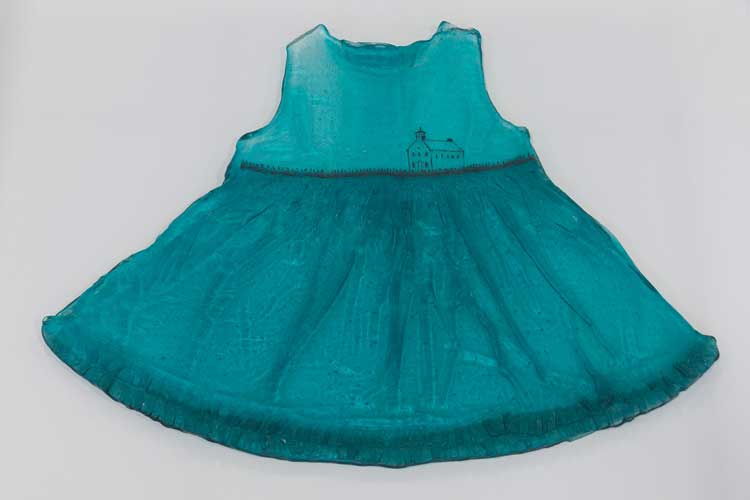 Matějka’s work is striking, with its alchemical transformation of glass into something else. The same could be said of Silvia Levenson’s Untitled (2007), a glass sculpture in the shape of a young child’s dress. Levenson’s likely point – that childhood is fragile, especially in places like her own native Argentina during the military junta – is not a particularly subtle one, but the meticulousness with which the silica garment has been created is astonishing, the very thread of the dress visible in aquamarine glass. 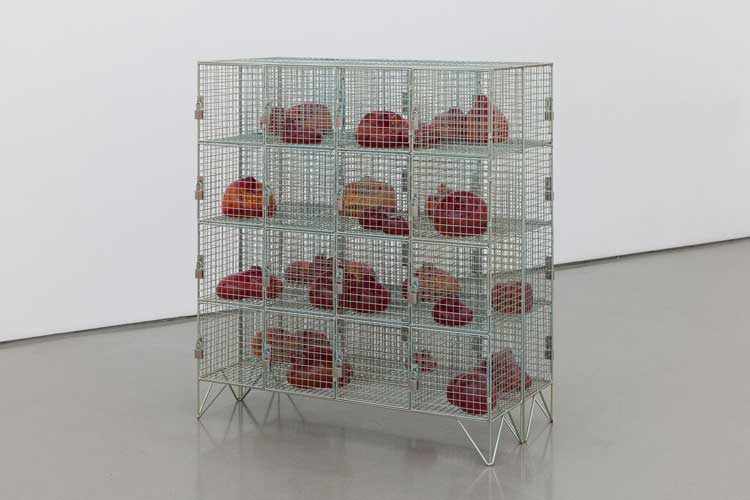 Mona Hatoum’s Cells (2014) also uses glass to evoke suffering. It consists of a steel grid construction of padlocked cages, many occupied by distinctly biomorphic red vases. Each is slightly different, crushed to varying degrees of abjection. One particular sad pair presses up against each other through the cell walls, craving whatever contact they can get. They could be spectres of people, bloody flesh sacks trapped in a real or imagined prison. Or perhaps the grid represents the callous, seriously minded conceptual art of the 1960s and 70s, locking away the more expressive and emotional side of art. Either way, they take full advantage of glass’s arresting visual qualities.

The only artist here not to do so is the arch-conceptualist Joseph Kosuth, whose early work Any Two Metre Square Sheet of Glass to Lean Against Any Wall (1965) is an anomaly in coming from a practitioner seldom associated with the medium. The piece – which consists of a metal plaque bearing the text in its title and the plain sheet of glass Kosuth mentions – is also distinct in not being the product of craft. “The materials of my work,” he writes in a statement for the exhibition, “have only value as part of the production of its meaning.” Kosuth’s aim was to reveal how artworks produce meaning, regardless of material and content. But A State of Matter shows that material concerns in art are very much alive.