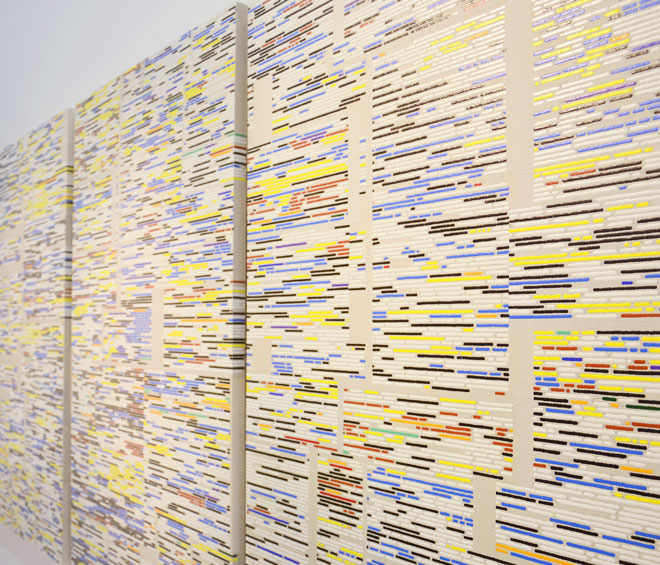 It is a bit of feat to present a 25-year survey in 13 works (even if limited to only one of the artist’s mediums, in this case painting.) But that is what Shanghai-based multidisciplinary artist Shen Fan’s show at Eli Klein in New York manages to do. Two untitled, delicately dense paintings from 1992 and 1993, the earliest in the exhibition, are the openers. Made with oil paint on paper, the time-honoured support of Chinese painting is paired with the signature medium of western painting, the materials immediately establishing the terms of inquiry as one between the practices and aesthetics of east and west. 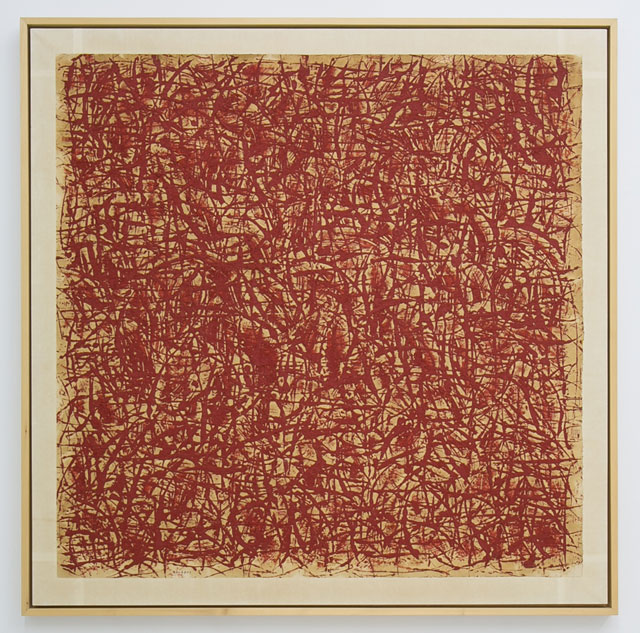 After seeing Jackson Pollock’s work for the first time, Shen wanted to make a painting that responded to the improvisatory nature of the American’s drip paintings without being a copy of it. What he determined to do was to explore ways to open up a discourse and reconciliation across cultures and chronologies, ways that would construct a contemporary idiom based on an enriched, composite language. In the two paintings here – an early venture into abstract painting for Shen – he started with a monochromatic ground, then bore into it, his deft incisions revealing the support to arrive at a complex, finely spun, all-over composition. The mode is subtractive, resulting in a kind of relief-like image that is very different from the premises that spurred Pollock’s “action” painting, the process far less spontaneous, the intensity of labour of a different order. 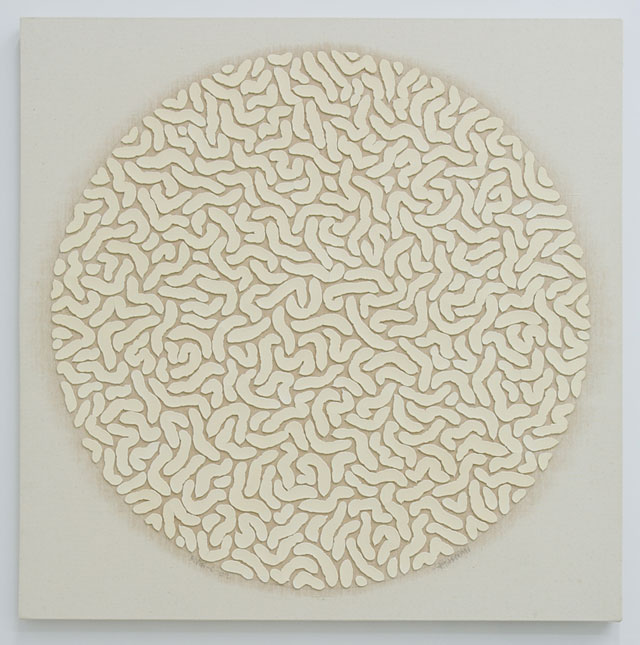 They were joined by four paintings from his ShanShui series (2004, 2007, 2008, 2009) – Shen frequently works in series – his reinterpretation of the classic literati motif of mountains and sea, but this time, while the subject is Chinese, the materials are oil on canvas, and wholly western. (He also imports the vocabulary of Chinese paintings into other media that are integral to his practice, such as ceramics, neon, and sculptural materials.) 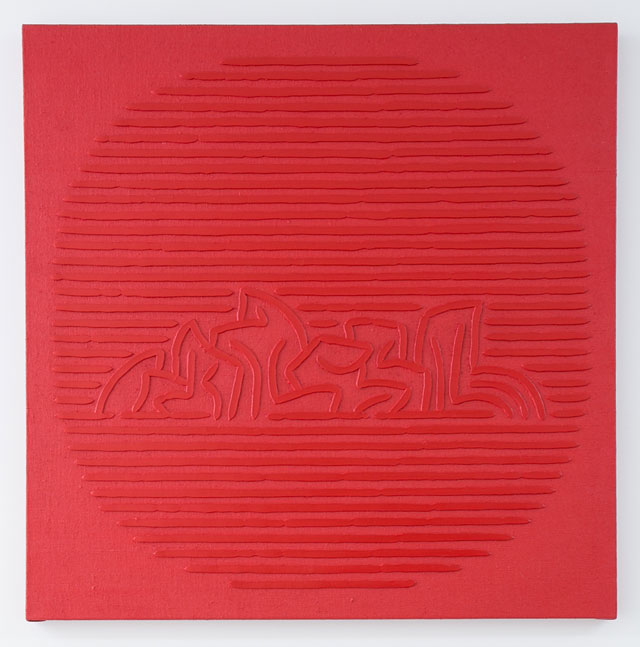 The two earliest ones shown are both vertical and deceptively non-objective at first glance, laddered by rungs of horizontal lines from top to bottom, one painting in black, the other white, while the other two are monochromes, in a striking red and blue. In these, the raised imagery in them is more apparent, the canvas again revealed, and you soon realise that the lines are more idiosyncratic than minimalist, subtly expressive and a few squiggled markings erupt from them like mountains or land from the water, islanded, situating them somewhere between representation and abstraction, east and west. It might be remembered that China did not have a tradition of abstraction until its artists were introduced to European and American modernism after the 1970s, except, perhaps, for calligraphy, its most revered form of expression. 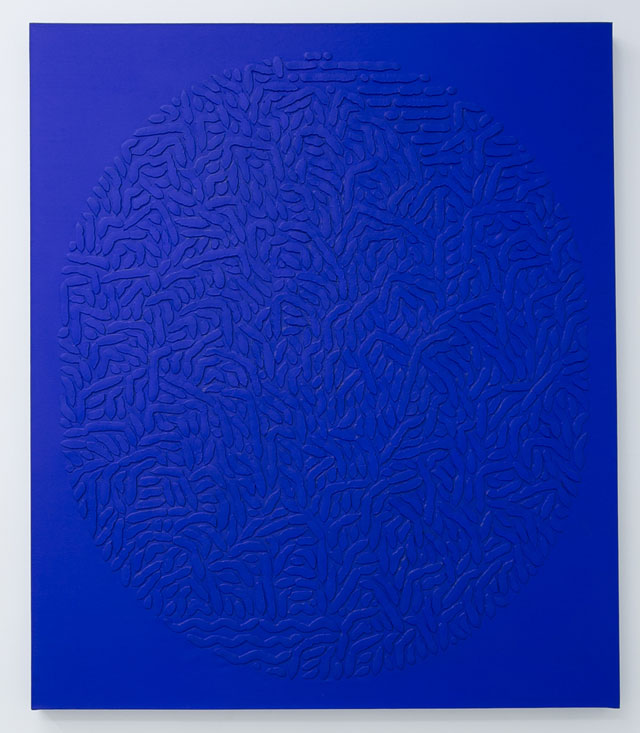 The show then jumps to another series, Punctuation, with works from 2014-17. They present another kind of landscape or topography – which they resemble – noting how we have transformed the context of our existence from nature to more artificial and constructed environments and systems that parallel the natural, the effects as impactful, reminiscent of the diagrammatic analyses of power systems and their interconnections by a number of American artists in the 90s, such as Mark Lombardi. 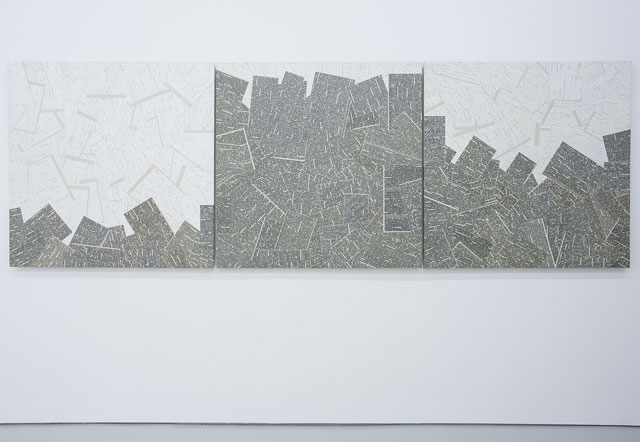 This series is made with acrylic on newspaper, mounted on wood panel, the materials again selected carefully as another purposeful departure from the conventional Chinese repertoire. The newspapers initiate further thoughts about the transmission of information in the 21st century, as print gives way to the digital. By blocking out the Chinese characters to focus on the composition, Shen shows us how meaning can be encoded within visualisation as well as in denotation, directing us to think about the manipulations of meaning, deliberately and inadvertently. The redaction has other implications as well since it is difficult not to think about censorship and how that stops the flow of information.

In another vein, we might read Punctuation-Inverted Image-001 (2017), cut across by a staticky red and green line, the top the inverse of the bottom, as the tremulous patterning of systems in flux, like the stock market, its fluctuations and systems the subject of works by the artist that are not shown here. But it also might evoke an EEG (electroencephalogram) – perhaps of brain signals frustrated by the lack of access to information. 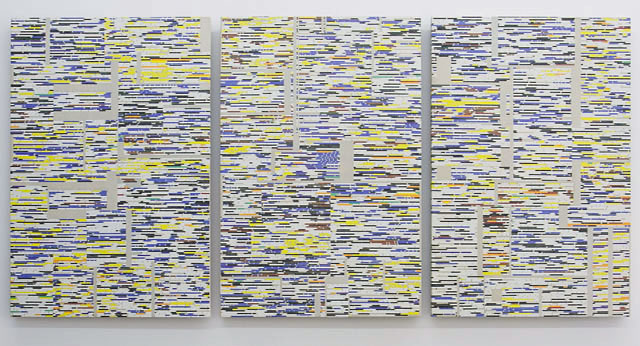 The showstopper, however, is Punctuation-17-001 (2017), an encompassing, visually engrossing three-part creation that is the most formally complex, its abstract and representational impulses tautly balanced. Shen has devised a colour code of punctuation marks for this mostly primary-coloured painting, green corresponding to a comma, black to a full stop and so forth, glossing the painting with another syntactical layer of concealment and revelation.

These elegant paintings are slow works, slow to make and slow to take in, challenging viewers to decode them, and rewarding those who do. 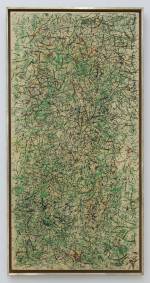