On a bright cold day in a London study, a little face flickers on a screen and then disappears. The wall is lined with stories, the desk is dotted with statues and an oriental couch sits nearby. A small voice can be heard in a room filled with ghosts. This is the study of a leafy Hampstead residence that once belonged to the legendary psychoanalyst Sigmund Freud. The place is filled with antiquities from the house in Vienna that he fled with his family in 1938 to avoid the Nazi seizure of Austria. His daughter Anna lived here too, and worked for many years as a child psychologist. On her death in 1982, the house was bequeathed to a charitable trust.

Today the place is a museum and the installation is part of Saying It, an exhibition that presents a mise-en-scène of the practice of psychoanalysis through the audio-visual storytelling of Mieke Bal and Michelle Williams Gamaker, and Renate Ferro. The show is the latest instalment of a contemporary art programme in existence for almost 25 years. More than 50 international artists have participated, including Susan Hiller, William Cobbing and Alice Anderson who, alongside those behind Saying It, shared their experiences of exhibiting at the museum with curators James Putnam, Griselda Pollock and Predrag Pajdic at a fascinating conference last September, Contemporary Art: Inside the Freud Museum.

Curator of Saying It, Joanne Morra, set the scene with her talk on the museum as a palimpsest with multiple layers of existence, in contrast to the modern gallery type of the “white cube”. It is what Michel de Certeau calls a “practised place”: a home for everyday life, a consulting room for psychoanalysis; a museum for its preservation; and a gallery where art interventions are practised today. The space is framed by Freud’s collection of art objects, which he began in 1896 as a means of bringing order to the chaos of mental life. Drawing on the words of one of his famous analysands, modernist poet H.D., Morra spoke of Freud as “a curator in a museum, surrounded by his priceless collection of Greek, Egyptian and Chinese treasures”.

In such a space, she posed the question: “How are works of art to intervene within it sympathetically, while at the same time, introducing new ways of understanding the museum?” Morra proposed the “site-responsive” approach of Saying It, which makes a critical interjection that activates the meaning of the site through a dialogue between exhibition and context, artists and visitors. As Bal and Williams Gamaker explained, Saying It presents a polite riposte to Freud’s theory of schizophrenia and asks for the issue to be addressed with clear-sightedness. The activation of the site is facilitated by the act of listening, witnessed by Patricio Forrester’s hmmm… (2000), which explored the tension between speech and silence essential for the psychoanalytic encounter.

Psychoanalyst and critic Darian Leader spoke of Freud’s enduring conversation with art, seen in his Leonardo da Vinci monograph and essay on Wilhelm Jensen’s Gothic novel Gradiva. The story of a young archaeologist captivated by the dream of a bas-relief coming to life inspired William Cobbing’s Gradiva Project (2007–08), in which he installed an embossed manhole cover on the pathway of the museum’s garden. He talked about how archaeological processes entered into his sculptural dialogue and shared the experience of making a concrete life-cast, on which he chipped away in a video installation. He conceded that this process was for him like psychoanalysis: “There’s never any breakthrough with the concrete; it carries on and on forever.”

Dreams permeated an eloquent talk by Susan Hiller, who joined Cobbing in an “artists’ roundtable” with Alice Anderson, who spoke about her unique response to pioneering work of Anna Freud. Hiller explored the layered creative process behind the installation From the Freud Museum (1994), now held in the Tate Collection. “Each of the units that I made were put together through a dream-like process – I started with an object and I would find a word or a text that would amplify ideas referring to this object,” said Hiller. In a PR-driven art world where the artist’s statement is often held up as the work’s meaning, Hiller spoke of the need for viewers to make their own interpretation.

James Putnam, Griselda Pollock and Predrag Pajdic gathered for a “curators’ roundtable”, which proved to be humorous and thought provoking by turns. Putnam spoke of the museum’s supportive environment and hands-on curation. He recalled his collaboration with Sophie Calle in Appointment (1999) as a narrative of wit and delight: “I remember a moment in which Calle put her wedding dress on the couch – it was like the ghost of a patient.” On a serious note, Pollock reflected on the colourline paintings of psychoanalyst and activist Bracha L Ettinger’s Resonance/Overlay/Interweave: In the Freudian Space of Memory and Migration (2009) by exploring the intriguing concept of fascinance: “an aesthetic event that operates in the prolongation and delaying of the time of encounter-event and allows the working-through of differentiating-in-jointness and matrixial copoiesis.” Pajdic considered the psychology of world events such as 9/11 and the Iraq war in the popular exhibition Paranoia (2007) through stories of terrorism, dissent, fear and spying by international artists who had participated in serious art exhibitions such as Documenta and the Venice Biennale. The curator said: “We wanted people to experience art and to think.”

In concluding the conference, the artists behind Saying It spoke about planning an exhibition at the Freud Museum and the importance of securing Arts Council funding at a time of public cuts to arts spending. In conversation with Morra, they looked at the idea of site-specificity and the dialogic theory of the philosopher of language Mikhail Bakhtin, who contended that to achieve true understanding, a person must be situated in relation to others. The artists addressed the question of whether psychoanalysis could help psychotic patients in their representation of the true case of the allegedly successful treatment of a schizophrenic woman in her thirties, “Sissi” (institutionalised since she was seventeen), derived from French psychoanalyst Françoise Davoine’s 1998 “theoretical fiction” Mère Folle. As Morra explained, Davoine conceptualises psychoanalysis as a social experience, and trauma as rooted in violent history.1

Back in the Freud Museum, Bal and Williams Gamaker’s ten-channel work Sissi in Analysis, portraying the woman and her analyst in short looped “sessions”, uncovers this history through costumed acts. Their screens are dispersed throughout the museum; one is set in a dark corner of the dining room, another brings light into the study. This curatorial approach facilitates the visitor’s understanding of the tensions and resolutions of this complex story. As the artists said: “What made the Freud Museum such a terrific site to exhibit Sissi’s story is that it is already so replete with stories. Every story that the Museum exhibits or implies becomes more dense, with theatrical and dialogic detail, by our interventionist display. We consider the exhibition site a terrain where new stories can unfold through the dialogue between old and new stories.”

This can be seen in the moment of breakthrough in Sissi’s story that is perfectly staged through the symbolic placement of the screen depicting this scene next to Freud’s iconic couch – the French word couch literally means to put an idea into words. Bal and Gamaker explained: “You see the woman and her analyst sitting side by side, the analyst with deep compassion and understanding in her eyes, you see Sissi get up from the sofa to address the historic painting on the wall (Bruegel’s Mad Meg), and you see the importance of Sissi’s body language, at the very spot that embodies the method of psychoanalysis that banned precisely all those things.”

In this statement piece, Bal and Williams Gamaker make a polite riposte to Freud’s ideas about schizophrenia, illustrating the relevance of this art exhibition for the professional field of psychoanalysis. The artists said: “Our exhibition engages in a real dialogue with Freud. The question if ‘madness’ can be analytically treated was left hanging; he answered in the negative but remained intrigued by it (as evidenced in The Schreber Case).2 So, by presenting a more or less successful treatment of a ‘mad’ (‘schizophrenic’) woman and the conditions under which her treatment is possible, we continue Freud’s exploration of this issue.”

Saying It not only raises visitors’ awareness of the importance of mental health but also their understanding of the relationship between contemporary and historical material culture. The show asks how fashion and technology shape one’s identity in a media-saturated age through the display of the lead actor’s costumes in the Exhibition Room. Bal and Williams Gamaker explained: “It makes a statement about exhibiting, its value as a cultural process, as much as about psychoanalysis. In this respect, the dialogue between past and present from the perspective of the latter implies that the present needs the past (we need Freud’s legacy, we need material culture from the past) not simply to (passively) learn from it but to thicken our sense of aliveness in the present.”

The cultural value of exhibiting contemporary material culture in a historical setting is rendered tangible in Renate Ferro’s art intervention in the Anna Freud Room – which presents the analyst’s diplomas and photographs, and considers her work with homeless and refugee children during the War – The Suitcase Has No Bottom. This one-channel video and audio installation is projected into a suitcase next to Anna’s own valise. The container opens to reveal an assemblage of belongings, layer upon layer. Each object slowly disappears in front of the viewer’s eyes, but simultaneously a story relates the narrator’s association with it, exploring memories of displacement. By drawing the visitor into a collective event, Ferro enhances their consciousness of the present.

Meanwhile, the single-channel video with sound Fort-Da: From the Pleasure Principle to the Technological Drive considers another kind of attachment, this time to the necessary accessories of the digital age: mobile phones and computers. Here, Ferro draws upon Freud’s “Beyond the Pleasure Principle”, contending that a child’s game is a mise-en-scène of a vital psychological event, and presents a video of a family engaging with technology in an everyday setting and an art museum. While referencing the space as a practised place, the scenes display the continued relevance of Freud’s writings in looking at why people are so attached to technological objects in an economy that reifies the existence of consumer gratification.

As Ferro explained in the illuminating exhibition catalogue: “Borrowing from Freud’s writing, this piece suggests that the use of contemporary technological gadgetry screens Freud’s hypothesis of childhood objectification. Can it be that our identification and obsession with technological gadgetry and the repetition of its daily use is a manifestation of our own deeply repressed anxiety about the presence and absence of our networked group of loved ones and friends? While we consistently try to rid ourselves of the ubiquity of technology we also cannot live without it.”3

Saying It is an exhibition that holds resonance for the art world and the wider profession of psychoanalysis at a time when digital technology is shaping our lives at pace, as seen in the high levels of audience engagement at the conference Contemporary Art: Inside the Freud Museum. In the multiple video installations of Saying It, the artists peel away the layers of what constitutes one’s identity through the display of contemporary material culture in relation to the palimpsest of the Freud Museum and its legacy of psychoanalysis. In conversation with Renate Ferro, Mieke Bal and Michele Williams Gamaker question prevalent representations of culture, in particular schizophrenia –which is so often inaccurately portrayed by the media. The artists highlight the important role of the cultural institution in raising awareness of mental health at a time of significant governmental cuts to spending on the issue. To tackle the present situation at events like this one, it is vital to seize the moment before it fades. 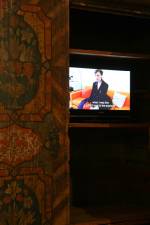