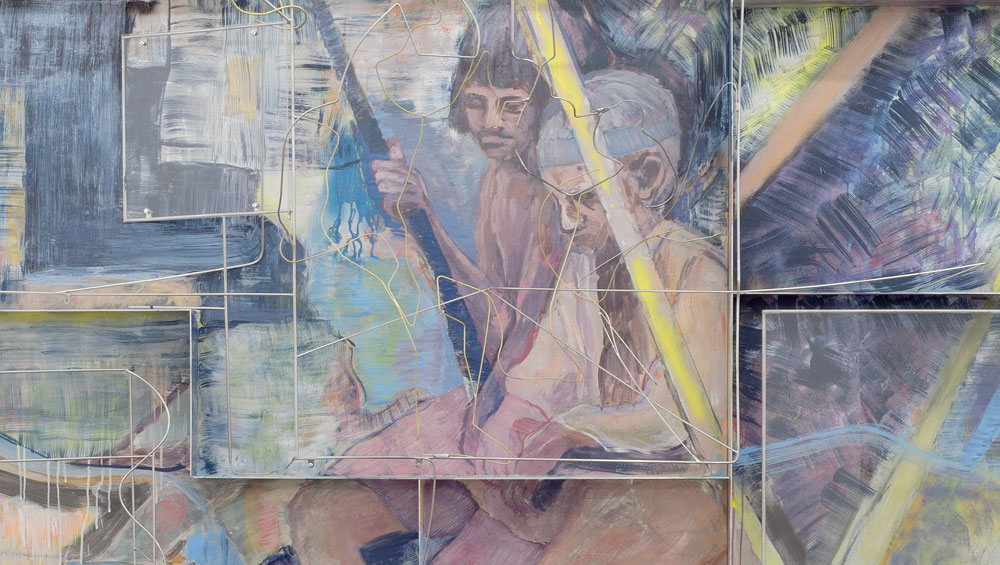 At Glasgow’s Mary Mary Gallery a moon is curled from steel wire. It seems plucked from a poem by the late American writer John Ashbery: “A crescent moon / hung in the sky like a parrot on its perch”, he writes in A Worldly Country. Below the moon is a crowd of barely formed figures, painted in wistful hues and deep in conversation. To the right, they tumble into vague washes of cream and cornflower. Once more, Ashbery fits the scene: “As I gazed at the quiet rubble, one thing / puzzled me: What had happened, and why?” 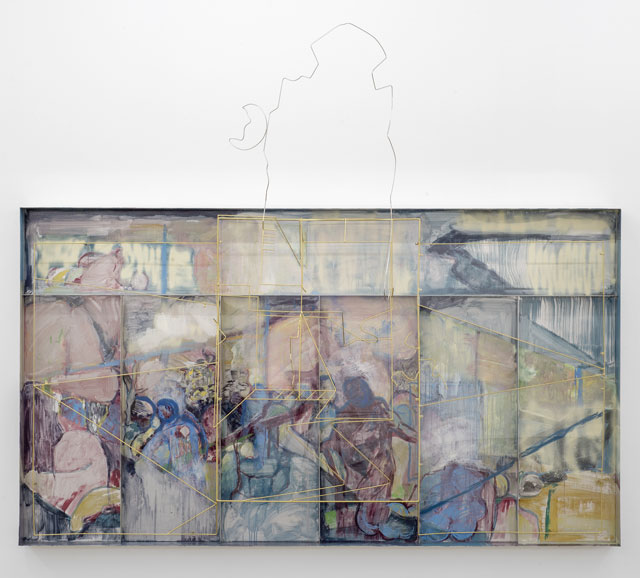 The piece is Forecasts a handful of blots and clouds and shapes (2017), one of five works in The faces of older images, an exhibition of wall-based relief sculptures by Sara Barker. The show opens Mary Mary’s new street-level space in Glasgow city centre, which is bright, contemporary and an upgrade from the previous site at the top of two flights of tenement stairs. Mary Mary started 11 years ago as a series of exhibitions in a student flat, and with this new opening has matured into a cool and influential presence on the Scottish gallery scene.

Barker (b1980, Manchester) is returning to Mary Mary for her first solo show in Scotland since Change-The-Setting (2016) at Edinburgh’s Fruitmarket Gallery. The faces of older images continues Barker’s trademark fusion of sculpture and painting, abstraction and figuration, history and the present. 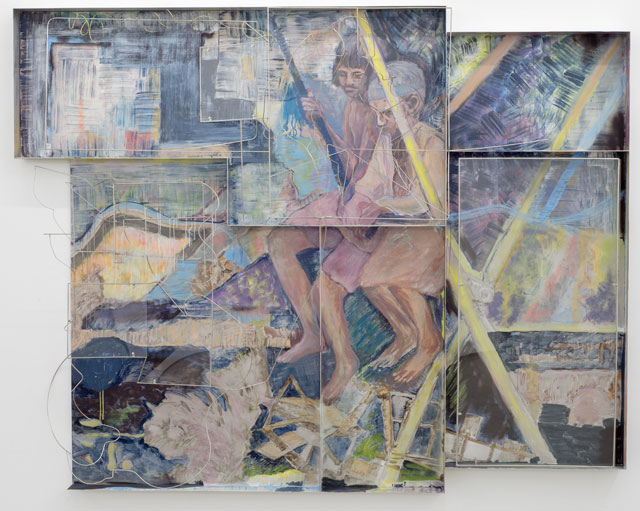 Steep-sided aluminium trays, similar to those used for Hayley Tompkins’ Digital Light Pools at the 2013 Venice Biennale, comprise the canvas for four of the five works. These are painted with occasionally narrative, sometimes abstract scenes in foggy hues. In each piece, set in front of the painterly basins is a stainless steel apparatus, which winds its way across the work, mirroring shapes, or cutting across the forms beneath. Affixed to the steel contraption are Perspex panels, which subtly alter the tones of the painting and reflect the room.

The similarities between Barker and Tompkins are numerous: both work in Glasgow, were trained at the Glasgow School of Art and are making claims for the relevance of painting in the contemporary art world. In Barker’s case, this is not a mounted defence of the medium, but rather a quiet demonstration of the possibilities of ambiguity in painting. In Double son out of rubble (2017), the most abstract work in the exhibition, Barker’s forms describe a crumbling wall – or perhaps an overfilled bookshelf, a pair – or perhaps a trio – of figures, an interior – or exterior – scene. It is a piece in which a narrative is never revealed. 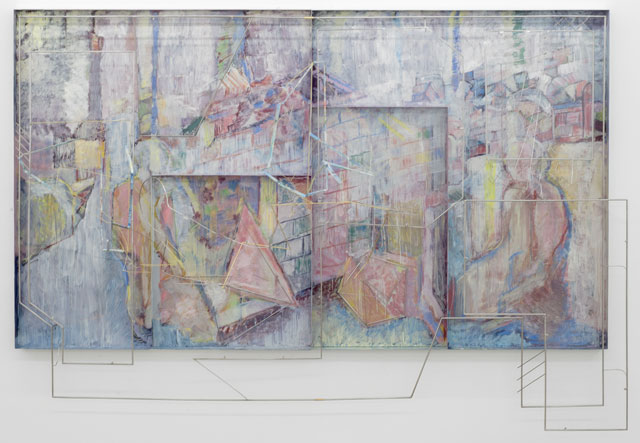 Painter Helen Johnson has previously described a similar function of the medium: “I am not interested in using painting to defend itself, make statements or draw conclusions, but to open spaces for reflective thought, where a multiplicity of positions can be recognised, particularly as a means of resisting the imposition of a fixed narrative.”1

Barker’s work is likewise far from showy. The Faces of older images offers a restrained examination of the relevance of painting to our contemporary moment. It demonstrates that painting can describe the present without resorting to irony or realism. 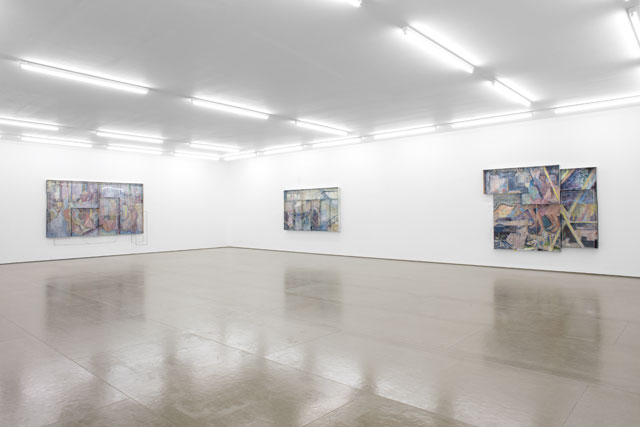 Critics are keen to draw attention to the “in-betweenness” of Barker’s practice. At the 2016 Fruitmarket show, the artist presented a series of human-sized sculptures made from fragile strips of painted aluminium. The pieces were between sculpture and painting, between 2D and 3D, between portraits and blueprints. However, this latest show is Barker’s most figurative work to date. Down their carved names the rain drop ploughs (2017), the most representational exhibit in the show, draws two seated figures, while 3 fabric figures on the heath changes the sky (2017) is a recognisably Scottish landscape. The accompanying text similarly draws comparisons to prominent figurative work, including Japanese ink drawings and William Blake’s visionary woodcuts.

But Barker’s work is not simply figurative painting. Each piece’s sculptural element denies a superficial reading of the work. For instance, the exhibition text describes the aluminium crate canvas as a “find tray” as found in an archaeological dig.

In each instance, what has Barker found? For Forecasts a handful of blots and clouds and shapes (2017), the archaeological find might be 19th-century impressionism, liberally applied to the aluminium; in Their carved names the rain drop ploughs (2017) the figures recall Gaugin’s Tahitians; and in 3 fabric figures on the heath changes the sky (2017), the discovery is a patchwork loch-side landscape. The painted surfaces of Barker’s sculptures are historic objects up for investigation.

Mary Mary Gallery describes Barker’s pieces as “monumental”, a fitting adjective for a protracted study of in-betweenness, history and painting as a medium. What is most impressive about the artist’s measured approach is that she avoids tropes; her works are sincere. The faces of older images forms slowly to a poetic vision. Returning to Ashbery, in his poem Bungalows: “For it all builds up into something, meaningless or meaningful / As architecture, because planned and then abandoned when completed, / To live afterwards, in sunlight and shadow, a certain amount of years”. 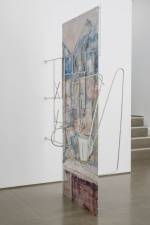 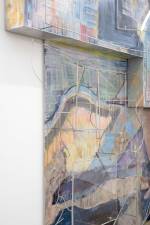