With Snøhetta’s new building now open, SFMOMA has more exhibition space than Manhattan’s MoMA, and more dedicated walls for photography than the Getty, and with its vast collection, it is an essential destination for any art lover 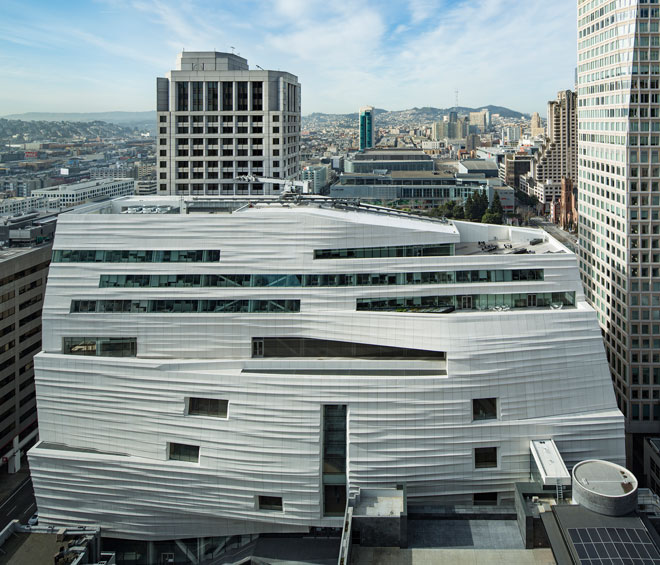 The cultural equivalent of clamping a major artery to the heart, San Francisco’s Museum of Modern Art has been shuttered for three years to enable a staggering 170,000 sq ft (15,800 sq metre) expansion by way of a second structure that links to the first through the original lobby and bridgeway. Opened in May to local huzzahs, if low global coverage, the $305m (£236m) addition gives a city of fewer than a million people the nation’s largest collection of contemporary art, more exhibition space than Manhattan’s current MoMA, and more dedicated walls for photography than the Getty. Together with the stunning collection of 1,100 blue-chip works assembled by Doris and Donald Fisher (founders of the retailer Gap) and a trove of new art that a successful donor campaign expanded to 33,000 artworks, the new SFMOMA justly challenges the title of top California museum so long held by Los Angeles.

If this sounds like the little engine that could, time out for some history. Opened in 1935, the San Francisco Museum of Art was virtually the first to exhibit photographs as fine art, and to promote the creative process of architecture, with the landmark 1940 exhibition,Telesis: Space for Living, which prompted the city of San Francisco to establish a planning commission. In 1975, 30 years after giving Jackson Pollock his first solo show, the museum added Modern to its name. and in 1995, for its 60th birthday, gave itself a website and commissioned a new home. Swiss architect Mario Botta delivered a classically proportioned red ziggurat whose boldly striped oculus was telescoped to the future and would have taken it there, but for the gift by the Fishers of an art collection that mandated twice the space. The board’s dilemma must have shaken the celestial rooftops – to add on or start over? An admirable penchant for risk, combined with financial constrictions and loyalty to Botta’s design-become-logo, opted for an additional structure, and one by a firm lauded for the not-obvious relevance of an opera roof sloped to the sea.

The resulting 10-storey expansion is a jarring success. Heavily criticised for mixing architectural metaphors by marrying a severe oxblood brick temple to a crinkle-faced, slit-eyed fog-grey polymer organism – think Mixcoatl weds Yoda – the Norwegian firm Snøhetta has, to the contrary, proposed a new visual vocabulary. Opening to six terraces, laddered upward by luminous stairways, Snøhetta’s block-long expansion reformulates “modern” by bisecting the comfort and logic of rectilinear galleries with bold interventions – Technicolor restrooms, a massive living wall, a mural composed of florals and felt, and galleries angled to the work of one artist – which propose that what stirs the post-millennial imagination is harmony thoughtfully disrupted.

If you allot yourself only one visit, block out three hours to take everything in. Enter through the new Howard Street entrance; spiral through Richard Serra’s torqued, 213-ton Corten steel sculpture Sequence, across the swath of free public space given over to hanging out under the vast Alexander Calder mobile, and up the maplewood stairway to the second-floor atrium. Metaphor for the window newly opened on black artists, blank walls await two vast murals by Julie Mehretu and a third holds an outsized painting by Mark Bradford. Check out the Frida Kahlo material and the storied Mark Rothko No 14, then head past the elevators painted red, which open on to the Botta building’s several hundred modern masterworks – Henri Matisse, Jackson Pollock, Pablo Picasso – from the Albert M Bender collection, to the silver elevators that access all floors of the new viewing spaces. Each has its own logic, one which, in keeping with the current push against linear installation, is geared more to impact than chronology, so you can navigate them at will.

Being a best-first person, I started on the fourth floor for the highlights of the 260 works on view from the Fisher Collection. Donald Fisher may have committed rather too pragmatically to “never buy an artist I cannot sell at auction”, but he bought at top dollar and was blessed with good advice and a rare eye; faulted as predominantly white, male and blue-chip, the collection is all that, but shines through for its timelessness and marks by its exceptions. Abstraction, for example, speaking here to gestural thought through paintings by Willem de Kooning and Brice Marden, holds its own with work by Joan Mitchell, Lee Krasner, Agnes Martin and Barbara Hepworth – all women last time I checked. More importantly, the Fishers collected in depth. Full series of screenprints command individual walls (Frank Stella, Mike Kelley, Sol LeWitt), and entire rooms have been assigned to Calder, Andy Warhol, Agnes Martin and – catapulted to the pantheon by his recent passing – the pristine geometrics of Ellsworth Kelly. A predilection for German art spotlights Sigmar Polke and dedicates individual galleries to defining works by Gerhard Richter and Anselm Kiefer. Hindsight and foresight pairs celebrity with fading talent, to give the early work of such 60s giants as Sam Francis, Larry Clark and Georg Baselitz a new relevance. Some artists are cross-referenced – John Chamberlain and LeWitt are among those shown on two floors – all are given deep wall labels to weave them into the overarching narrative (pop, minimalist) or themed exhibition (Film as Place). Excepting a numbing 11 portraits by Chuck Close, even familiar works challenge and refresh. Warhol, for one, wrung dry by the relentless spate of pull-in-the-crowd solo shows and flooding the market since the Andy Warhol Foundation sold off its holdings, here looks ground-breaking again.

The timelessness of the Fisher Collection is fortunate since, by contract, it can be shuffled around to accommodate loans and acquisitions but must preserve for a century what the family holds its coat-of-arms by reverting every 10 years through to 2116 to the current installation. Not all are on board with the dictum, and pushback has been vocal; the lack of problematic work is not the problem – enough of “piss Christs” and “cock drawings” – but how does male and Caucasian speak to a changing demographic that is tilting to Hispanic, Asian and transgender? Answering these concerns are Snøhetta’s floodlit galleries and wide spaces that are as open to tough art and creative interpretation as to the views through their windows.

True, several of the recent donor acquisitions playing out on the seventh floor advance little beyond civic pride: Gee, three Jeff Koons icons! A signature Richard Prince! Those Ai Weiwei pots! A standout Jeff Wall – total trophy since his move to Gagosian! And, if not his best, the requisite Christopher Wool. Things pick up, though, with the local boys; Charles Ray, represented by his burnished steel Sleeping Woman, Doug Aitken by Start Swimming, flashed on an aluminium lightbox, Vincent Fecteau by a sculpture wrested from pink papier-mache, and Mark Grotjahn by one of his radiating oils on cardboard. Heavyweight David Hammons weighs in with the slam of his brick and basketball smudge piece, and the irrepressible Matthew Barney with his Repressia video / petroleum jelly / socks / yellow wrestling mattress mashup. Counterbalancing the perceived male-inclined heterodoxy is the strong addition of women artists at the top of their game: Sherrie Levine’s Fountain (nicely complementing the museum’s long-held Marcel Duchamp urinal), and commanding video pieces by Rachel Harrison and Ann Hamilton. The moving image takes over two galleries, most successfully with Julia Scher’s Predictive Engineering, a work reconfigured for its new space that focuses on visitors wandering unknowingly past its cameras, flipping yesterday’s fear of surveillance to the contemporary longing for five minutes of fame.

You may not get to the two shows on until December in the generous spaces allotted to photography, but don’t miss the handsomely installed Alexander Calder Motion Lab, so called because several of the sculptures have been, literally, reactivated. Viewed through the glass walls or from the cafe above, they symbolise SFMOMA’s most marking achievement; an idea of the future, cued by a luminous expansion and astute collecting, as a mindful and transparent coherence. Here, for this youth-oriented era is a grownup institution, a museum that fulfils its mission by the nobility of its bones and the depth of the art that fleshes them out, so bravely foregoing the cascades, mounds and interventions of found and made stuff that titillate fairgoers into styling as art what is largely froth.

Arguably, like an art fair and a name gallery, a major museum is a brand. Still, a brand is a promise. Let the art fair stay a mood board, a sales tent of swiped images that have merged for the moment. Let the art gallery remain a curated dealership, capable of touching the sublime but serving the art first as a move-it-in, move-it-out, feed-the-meter, parking place. A museum, before all, is art’s home. Focus is its strength, context its teaching, and quality its standard. A great museum is a pledge; here you will experience stirring encounters of a close kind. And a contract; we are not going anywhere, the art is not going anywhere, and you can trust us, through how we reimagine it, to move you through it in new ways. SFMOMA delivers on all counts. The quality of the Fisher Collection, the level of art since acquired, and the lilt of an addition that marries tradition to a new take on the future join it to the list of essential destination viewing.

• SFMOMA is at 151 Third Street, San Francisco, California. The galleries are open daily from 10am to 5pm; Thursdays until 9pm. From September, SFMOMA will be closed on Wednesdays. Offsetting the steep $25 (£19) entry fee, the ground floor is opened without charge to the public and under-18s are admitted free. Advanced reservations at sfmomo.org/tickets; 00-1-415-357-4000.
Located on the ground floor, In Situ is a 150-capacity restaurant, whose owner/chef Corey Lee – recipient of three Michelin stars – aims to integrate people with art at the fundamental level of a freshly cooked meal. 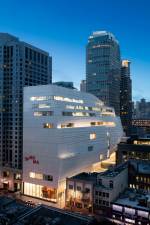 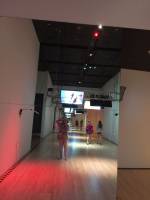 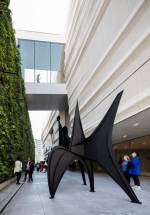 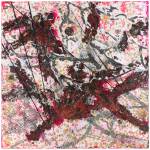 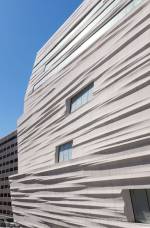 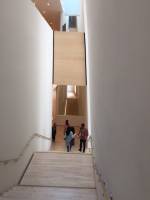