This small but enchanting exhibition of paintings, drawings and photographs of the pre-Raphaelite beauty Jane Morris explores the role she played as the muse of Dante Gabriel Rossetti

“All the world knows the masses of dark hair, the ivory complexion and exquisite features, the beautiful hands and the great grey eyes which were so unique and overwhelming in their beauty.”1

On the centenary of her death, this small but enchanting exhibition brings together more than 30 paintings, drawings and photographs of Jane Morris née Burden (1839-1914), chief muse for the later works of Dante Gabriel Rossetti (1828-82), and the recognisable embodiment of Pre-Raphaelite beauty. “The Lady Lever Art Gallery has one of the best Pre-Raphaelite collections in the world, so we're delighted to tell the story of the relationship between two of the movement's chief protagonists,” says Sandra Penketh, director of art galleries. It was a love story, but unfulfilled and heartbreaking, since Jane, who became embroiled in the Pre-Raphaelite circle after meeting Rossetti in 1857 at an Oxford street theatre, went on to marry his friend and colleague William Morris (1834-96), with whom she had two daughters. After she began an affair with Rossetti, however, Morris and Rossetti agreed to share the tenancy of Kelmscott Manor in Oxfordshire, so that Jane and Rossetti could spend time together without attracting scandal. During the years that followed, Jane sat for many of Rossetti’s greatest works. He was truly obsessed by the unconventional beauty – or handsomeness – of his model, and she, in turn, loved and cared for him after his breakdown in 1872.

Rossetti, who cofounded the Pre-Raphaelite Brotherhood with William Holman Hunt (1827-1910) and John Everett Millais (1829-96) in 1848, was the main inspiration for the second generation of artists influenced by the movement, most notably Edward Burne-Jones (1833-98) and Morris himself. A poet, illustrator, painter and translator, Rossetti imagined himself as a latter-day Dante (1265-1321) – he was his namesake after all. He repeatedly cast Jane as his heroine. The pictures are not “portraits” as such – she is playing the roles of Proserpine, Pandora and other characters from Greek mythology. Jill Iredale, the exhibition’s curator from Cartwright Hall Art Gallery in Bradford, describes it as being like a director casting his favourite actress in all the best roles.

What began as Jane posing for some murals that Rossetti was painting for the Oxford Union, when they first met, soon turned into regular sittings for him at their homes. In 1865, Rossetti organised a photography session with John R Parsons at Tudor House in London, where he directed Jane in a number of poses that he would use as studies for future works. The photographs, which show Jane seated, leaning forwards, standing under a marquee and reclining on a divan, are experiments in pose, and, at a glance, could easily be mistaken for sketches by Rossetti himself. In 1868, Jane began modelling for him in formal sessions, but, around 1870, Rossetti made about 15 drawings of her on a sofa, using pencil or pen and ink, rather than the elaborate coloured chalks he used for his more formally posed drawings. The pen and ink enabled him to focus on her distinctive mane of dark hair, while the pencil is gentle and suggestive, with smooth outlines and shading. Everything about the works is soft and flowing: her hair, her silk gowns, the line of her hands – long and delicate, much admired by Rossetti, and thus often central to the composition – her nose, her chin and her soft, full lips. She is idealised and portrayed as flawless in each instance, but, drawn and painted from all angles, her every feature must have been intimately known to the artist.

The two earliest chalk drawings in the exhibition are La Donna della Finestra (1870), in which “Jane” looks down compassionately on the poet Dante, who is mourning the death of his love Beatrice, and La Donne della Fiamma (1870), inspired by the dream described at the beginning of Dante’s Vita Nuova, in which Love commands Beatrice to eat Dante’s burning heart. This metaphor for his passion almost certainly mirrored Rossetti’s own feelings towards Jane.

Jane spent the summer of 1871 together with Rossetti at Kelmscott Manor where he worked on Water Willow (1871), the title of which referred to the trees along the riverbank, as well as to a sonnet sequence, Willowwood, which he had written three years previously, when his love for Jane was still secret: “Then the dark ripples spread to waving hair, And as I stooped, her own lips rising there, Bubbled with brimming kisses at my mouth.”The drawing shows Jane set against the water, holding a pansy, her eyes bright, her hair shining, her lips full – in the painting, which would follow, her lips would gleam a bright orange and the pansy would be replaced by willow branches. This softer version is less striking, perhaps, but all the more endearing and alluring for its subtlety.

The stories behind the drawings follow the story of Rossetti and Jane to a tee. In 1878, he drew (and later painted) Pandora, a mortal woman, who, in ancient Greek mythology, had been given a casket by Jupiter and forbidden from opening it. Her disobedience let out evil into the world, but, on shutting the box again, she kept hope, alone, inside.

Proserpine (1882) is said, however, to be the work that held the deepest meaning for the couple, who spent their summers together but winters often apart. After Proserpine was captured by Pluto, god of the Underworld, her mother Ceres pleaded with Jupiter for her return to Earth. He agreed on condition that she had not eaten any fruit from the Underworld. She had, however, eaten a single pomegranate seed, and, accordingly, had to remain in the Underworld for six months of every year, during winter, the season when the world turned cold and dark. On her return, the weather would improve and the land would become fertile again. The original version of this pregnant work is now in the Tate collection, and the one on show here is a smaller copy made for the collector LR Valphy, in which Jane is shown with fiery auburn rather than dark hair.

The final work for which Jane posed directly, before realising that her relationship with Rossetti was over, was Astarte Syriaca, sketched and painted during the winter of 1875-6 in Bognor Regis. Ironically, this is the one painting that Jane disliked, but also the one by which her features are most widely recognised today. A predecessor of the classical goddess known as Aphrodite or Venus, for Rossetti, Astarte symbolised the power of Love aroused by female beauty.

Although Jane no longer sat for Rossetti, her features continued to appear in his works until the end. Jane outlived Rossetti by 32 years, fully reconciled with Morris, who outlived him by 14. 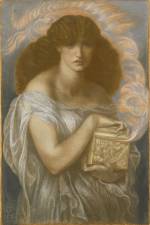 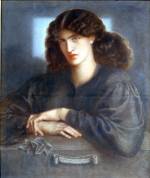 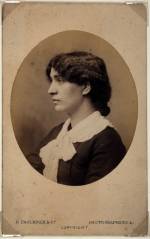