An American in London: Whistler and the Thames

An American in London: Whistler and the Thames

“Oh Fantin, I know so little – things do not go quickly!”, wrote James Abbott McNeill Whistler to Henri Fantin-Latour in 1864, with uncharacteristic modesty. The illuminating exhibition of Whistler’s depictions of London between 1859 and 1903 at the Dulwich Picture Gallery suggests that he knew a great deal, despite this intimation of self-doubt.

As well as tracing the remarkable transformations of his work in an impressive range of media, the display also serves as a chronicle of a changing London and its liquid heart, the River Thames, from its industrial traffic and civic engineering to its otherworldly fogs. The river was a feature of Whistler’s daily life for around 40 years and, through its portrayal, he presented a complex story of art that saw him mediate realism, formalism and subjectivity. He began his explorations in the east of London, at Wapping, Limehouse and Greenwich, before moving upriver, his cosmopolitan background and outsider status perhaps easing his access to the mean streets of the docklands (among “a beastly set of cads”, according to his friend George du Maurier), just as his mastery of French as a boy in St Petersburg had offered him an entrée into Paris’s artistic and literary circles.

It is through his acutely observed etchings of the river that the exhibition opens, with the lucid scenes known as “The Thames Set”.1 Despite his cultivation of a bohemian insouciance, these images are a reminder that Whistler was a skilled topographer, having been employed in the cartographic section of the US Office of Coast Survey. It was here that he mastered the art of etching, although he was eventually dismissed for his unconventional work habits. These are alluring images of dockside life, with unpatronising views of Thames warehousemen, sailors, naval pensioners, prostitutes, coal heavers and longshore men rendered with preternatural clarity. Of equal importance is the portrayal of the river vessels whose nomenclature, as revealed in the richly descriptive catalogue, is fascinating in itself: wherries and ferries, oyster smacks, schooners and clippers, tug-boats, lighters, skiffs and paddle steamers. In marked contrast to Whistler’s later, and better known, dissolution of detail, etchings such as The Pool (1859) show a meticulous depiction of space, even in the distance, something one critic unfavourably ascribed to the influence of photography.

The Thames etchings are marked by intricate textures of etched lines, coarse and fine, cross-hatching, shading and the accidental effects of foul biting. For all his studied dandyism and entertaining petulance, Whistler was an industrious and painstaking worker who persistently modified the etchings in pursuit of the desired effects. The Lime-Burner (1859) is particular arresting, with its impressive spatial recession possibly influenced by de Hooch’s Delft courtyards; the Pre-Raphaelite FG Stephens called it “thoroughly Rembrandtish”.

This was, however, also a Dickensian London and the catalogue reproduction of George Cattermole’s illustration of Quilp’s Wharf from The Old Curiosity Shop suggests another visual source for Whistler. Limehouse (1859) portrays a pub that also featured in the novel, the Bunch of Grapes, now the Grapes, on Narrow Street, where wharfs and warehouses of the kind portrayed by Whistler still stand. Black Lion Wharf, depicted in Whistler’s 1859 etching of that name,was of particular importance to the artist and is easily visible, though perhaps not always noticed, in his celebrated Arrangement in Grey and Black, No 1: Portrait of the Painter’s Mother (1871). For Baudelaire, etchings represented the emblematic medium of modernity and revealed most clearly the artist’s true character. He responded enthusiastically to The Thames Set, his textual description of the artist’s “subtle” etchings as acutely evocative as Whistler’s images: “… a marvellous tangle of rigging, yardarms and rope; a chaos of fog, furnaces and gushing smoke; the profound and complicated poetry of a vast capital,”2 though Whistler was unimpressed by his comments.3 Nonetheless, The Thames Setetchings were immediately well received and entered a national collection at the South Kensington Museum, later the Victoria and Albert, as early as 1861.

Around 1860, Whistler’s work in oil also revealed a distinctly realist imprint and a sometimes quasi-anxious awareness of Courbet. “Hush!” he wrote to Fantin-Latour. “Not a word to Courbet!” This was apropos of Wapping (1860-64), a view of three figures on a balcony overlooking the Thames in Bermondsey, which had caused him considerable difficulties though he deemed it a “masterpiece”. The image maintains the graphic acuity of the etchings with the addition of unusually intense colours – Whistler told Fantin-Latour that the background, with its confusion of river traffic, was “like an etching”. He repeatedly modified the three figures, transforming the original old man into the artist Alphonse Legros and giving the “supremely whore-like” Joanna Hiffernan a more modest, uncontroversial cast. These pentimenti were unsuccessful, the three figures stiff and unconvincingly connected to one another, the figure of Hiffernan especially incorporeal in what, for Whistler, was an unusually thick, unwieldy impasto.

Still bearing a spectral trace of an underlying self-portrait, Brown and Silver: Old Battersea Bridge of 1859 is also a relatively objective, if dour, view of the bridge at Battersea in a tonally restricted palette of greys and browns. It was precisely this sombre veracity that elicited considerable admiration when it was exhibited at the Royal Academy, the picture “all English grey and damp”, “an inlet into nature”, to the extent that “one seems to be looking back right into last November”.4 The last wooden bridge on the river, Battersea bridge was something of a remnant of an old Thames that was being transformed by steam navigation. Increasingly perilous, with its rickety wooden supports (a contemporary viewer described it as a “deformed, dangerous and hideous-looking structure”), the catalogue essay suggests that this air of dereliction may have been even more appealing to Whistler than a sense of wistful nostalgia. The exceptional lithotint The Tall Bridge (1878), shown at low tide, exposes the dramatic precariousness of the structure.

Later installed upriver at Lindsey Row, now Cheyne Row, with neighbours who included Algernon Swinburne and Dante Gabriel Rossetti, Whistler’s visual language shifted as he responded to an increasingly accessible Japanese art. His elegant, airless interiors, which introduce Japanese elements, reveal a fuller picture of his artistic development. In Symphony in White No. 2: The Little White Girl (1864), Hiffernan holds a fan decorated with a design from Hiroshige’s 1857 The Banks of the Sumida River, shown in the gallery next to the portrait in an uncut print from the Victoria and Albert Museum. Caprice in Purple and Gold: The Golden Screen (1864) went further, Hiffernan now bedecked in opulently embroidered robes and kimono and surrounded by numerous Hiroshige prints and a golden screen. Whistler did not, however, limit himself to introducing these elements in his interiors and soon Japanese elements permeated his river views. Variations in Flesh Colour and Green – The Balcony (1864-70) presented a group of models in kimono on a balcony, with the unlikely backdrop of the industrial Thames, which has become less descriptive and more atmospheric, even slightly exoticised, in the liquid, iridescent paint. In the pallid, aqueous Battersea Reach from Lindsey Houses (1864-71), Whistler dissolved forms even more and there are traces of the mast and rigging of the sailing boat having been painted out. The methodical description of the Thames traffic as seen in the etchings has vanished as Whistler becomes increasingly absorbed by the formal effects of tone and texture.

The presence in the gallery of contemporary photographs of the Thames by James Hedderly (c1815-85) and other, mostly unknown, photographers is useful in emphasising Whistler’s increasing and quite literal change of focus in his Thames views. These photographic images and the catalogue chronicle the river’s growing industrial landscape of saw mills, chemical works and iron foundries as well as the redevelopment of the Embankment and the changing economic relations of the Thames, most notably in the abolition of the bridge tolls, which heavily increased river traffic. Among this commotion of industrial advance, Whistler seemingly retreated from reality towards an aestheticising, self-enclosed world of painterly concerns.

Initially, Whistler introduced the trappings of Japonisme into his pictures in the form of textiles, fans, prints and so forth, but in works such as Nocturne: Blue and Gold – Old Battersea Bridge of 1872-73 his absorption of Japanese art informed the actual structure of the image. The selective focus on a single pile of the bridge in these T-shaped compositions has been compared with several Hiroshige woodcuts and renders these images less a topographical document and more an exploration of form, colour and mood. The last part of the exhibition is devoted to the Nocturnes, and also on display are Japanese works that Whistler might have responded to: woodblock prints by Hiroshige and Katsushika Hokusai, as well as etchings by Okada Shuntosai. While usually considered abstractions of a subjective and aestheticising type, Whistler’s fogs could justifiably also be seen as naturalistic representations of atmospheric conditions particular to the Thames of his time, conditions that at times admittedly concealed the industrial squalor. The poet-critic Arthur Symons identified these “exceptional difficult moments of nature”5 in which shapes, so-called reality, were rendered indecipherable by sunlight, mist, twilight or night, and stressed that these obfuscations were what Whistler most cared about. The painter Albert Moore, testifying in the Ruskin-Whistler trial, claimed the extraordinary thing about Whistler was that he “painted the air”, particularly in the Battersea bridge images. In his 1888 essay London, Henry James wrote about the “low, magnificent medium of the sky” in “the murky Babylon” that was London: “The atmosphere, with its magnificent mystifications, which flatters and superfuses, makes everything brown, rich, dim, vague, magnifies distances and minimises details, confirms the inference of vastness by suggesting that, as the great city makes everything, it makes its own system of weather and its own optical laws.”

While certainly one of the subjects of Whistler’s Nocturnes could be said to be paint itself, they can also be seen as closely observed studies of these particular physiological conditions, as elusive and ephemeral as they were. (Oscar Wilde, on the other hand, suggested that, while there may have been fogs for centuries in London: “They did not exist till Art invented them.”) Nonetheless, the Nocturne in Black and Gold: The Falling Rocket (1875), not present in the Dulwich exhibition, elicited Ruskin’s vitriolic attack in which he accused Whistler of “flinging a pot of paint in the public’s face”. While Ruskin had admired Turner’s earlier abstractions (causing Kenneth Clark to call this attack “a sad irony”), Whistler’s studies lacked the associative ideas and moral purpose that Ruskin deemed essential in serious art.

Whistler’s last Nocturne, a translucent lithotint of the Thames made from the Savoy where he was staying with his dying wife, was indelibly associated with this tragedy and he refused to have it printed. Ultimately, the Thames could be said to represent Whistler’s life and art and constitutes a highly effective lens through which to assess his elegant images and complex ideas about the relationship between realism and abstraction, often pitted as opposites. While he responded to elements of French, British, Japanese, Dutch, Spanish and American art in his synthesis of a genuinely novel visual language, what emerges in this engrossing exhibition is that Whistler’s images simply look like no one else’s. 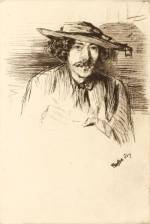 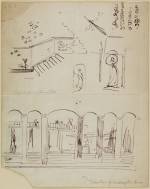 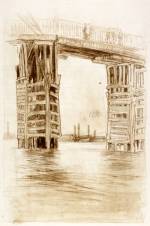