Robert Adams: The Place We Live

Robert Adams: The Place We Live

“Ah, what an age it is / When to speak of trees is almost a crime / For it is a kind of silence about injustice!” Bertolt Brecht wrote in To Posterity. The poet was no doubt aware that nature and maltreatment were by no means exclusive. We have daily reminders, via the escalation of climate change, of humanity’s unwillingness to put its own survival above the desire for profits.

Robert Adams’s enigmatic, graceful exhibition at Jeu de Paume suggests there are untold subtleties and nuances involved when examining this changing world. He reaches beyond the extremes of polluted dystopias and mythic Gaia-worshipping utopias in the past. Instead, we have transformations in slow increments, sometimes glacially, sometimes retrogressively. Along with the results we might suspect, Adams shows the unexpected desolation of Eden and the eerie splendour of suburbia.

The placid exteriors of the photographs in The Place We Live gradually give way to reveal many other layers to Adams’s depictions of the recent American west. They disclose a sense of heartache for what was lost in the taming of the plains, as well as awe towards the enduring grandiosity of horizon and sky (Northeast of Keota, Colorado, 1969). Indeed, they chart places that were never quite tamed. The highways may cut defiantly through the striking wilderness (as in Larimer County, Colorado, 1977), but they remain empty. The communities who have staked claims in the scattered settlements appear mundane at times, destructive at others, yet not without a quiet solemn dignity. The ghost haunting the exhibition, for all its humanist and ecological inferences, is time. The fluctuations of the fleeting moment and the idea of permanence are revealed as equally compelling and spectral. One day, we will not be here, but the environment will. The ancient nature of Adams’s backdrops reminds us that our non-existence on this planet has already happened before.

In framing the creeping colonisation of nature by civilisation, Adams conveys a sense that there is little majestic that we cannot degrade. The gigantic tree in Sitka Spruce, Cape Blanco State Park, Curry County, Oregon (1999–2000) seems both imposingly regal and tortured, as if its network of branches were a thicket of spears. Though the human is absent, aside from behind the lens, it is there as a shadow presence. The elephantine Kerstin, Next to an Old-Growth Stump, Coos County, Oregon (1999–2003) dwarfs the figure standing next to it. The sheer size, the ancient contortions of wood and the new saplings emerging from it all indicate the power of nature, if not indestructible then doggedly tenacious. The desecration involved in felling the tree is obvious, but there is also a note of hubris. Might there be a hint of those lines from Shelley’s Ozymandias to the scene, a reminder of those “vast and trunkless legs of stone” in the wastes that spell out humanity’s vanity and eventual obliteration? What lays waste is itself laid waste to in time.

Amid the flat-packed conformity of Adams’s Colorado Springs, Colorado (1968-69) photographs, there are flashes of both hope and fragility. In one shot, two apparent neighbours stand talking between houses, providing a sense of community despite the anonymity of the surroundings. The immersive shadows over one of the characters suggest perhaps darker undercurrents, though the tone is a warm, optimistic one. Adams’s mastery of light and shade is clear all through the exhibition, not least in the more troubling poetic shot of a figure silhouetted through the window, standing inside one of the homes. Who is the character and what are they doing in such a pose? Are they engaged in some domestic or existential crisis, we might ask, with a hint of the smile that Adams has suggested he is searching for. Yet, to consider resemblances, the scene and its attendant ones call to mind the Midwest replica towns with their mannequin populations built to test the effects of nuclear detonations. Such is the liminality of suburbia that it is unclear which one was the replica and which the real.

Adams is much too empathetic a photographer to delve fully into these analogies and the misanthropy therein. His portraits of diners in Eden, Colorado (1968) may be faceless, but they show an undoubted skill and an eye for unique human characteristics; hair, fashion, posture and the much deeper little touches that make us individuals. Even when he captures the apparently soulless, his photographs invest the occupants and settings with soul, or rather locate it where it is hidden. His Pikes Peak, Colorado Springs, Colorado (1969) shot of a petrol station at dusk has the feel of a luminescent secular shrine. There is real, palpable joy frozen in the fairground of Longmont, Colorado (1979). In Denver, Colorado (c1981), we even have the ludicrous heart-warming everyday Pietà; this time, comedy compared with the tragedy of old. We have erected drive-in cafes where the buffalo once roamed, to say nothing of the dinosaurs. In a confession, to ourselves primarily, but perhaps to another (Methodist Church, Bowen, Colorado, 1965), we might say: “Well, we’re human, what else could we do?”

That is not to say we are to be absolved of our sins. With Burning oil sludge, north of Denver, Colorado (1973-74), Adams is unequivocal about our tendency to ruin, in a landscape that seems both biblical and intrinsically modern. With Quarried Mesa Top, Pueblo County, Colorado (1978), we discern patterns made by tyremarks in the dust near a precipice. The message goes without saying, though echoes of the Nazca lines can be faintly distinguished. Here, the purpose was not art or communication with some celestial being, but straightforward brute commerce. Adams cannot help but capture the beauty of the scenes of destruction because, worryingly for us, they are beautiful.

In Neahkahnie Mountain, Oregon (2004), we gaze at the timeless simplicity of leaves, resonant through their placing in time and space in the title, but also because of their condition. They are half-eaten by unseen pests but they still survive, connected to the plant; an appropriately humble symbol for our tenuous existence with the Earth. In Interstate 25, Eden, Colorado (1968), there are a few wisps of cloud, a semi-arid plain and a sign marking out Eden. It is only by examining the side of the road the camera is on that it becomes apparent that this prospect is one we are glancing at while exiting not arriving. We have left Eden, if we ever were there and there is no turning back.

“Are there affirmable days or places in our deteriorating world?” Adams has asked in text. In his marvellous photography, he has answered in the affirmative, to the extent of casting doubt on whether the world is deteriorating at all. Instead, there seem to be cycles of growth and ruin, with beauty always there to be found amid the wreckage. While balance may seem elusive, it has been this way since time immemorial and will remain so, as his pictures imply. For a species miraculously clinging to an exquisite rock in space, there seems little other choice than to enjoy the view while it lasts. 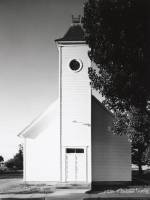 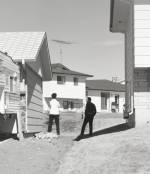 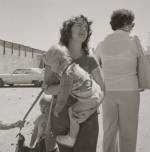 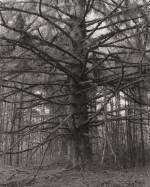