Rhythm and Geometry: Constructivist Art in Britain since 1951

Rhythm and Geometry: Constructivist Art in Britain since 1951

There is some compelling work here, but this could have been a chance to see a century of revolution in art, science and technology from the 1920s to the present, so neglecting the pre-1950 period seems a shame

An exhibition at the Sainsbury Centre captures something of the mood of the present, in its reflection on a balancing of constraint and liberation. Conceived by Tania Moore, the Joyce and Michael Morris chief curator, the exhibition draws closely on a “substantial bequest” in 2019 from husband and wife Joyce and Michael Morris, who developed a unique collection of British constructivist art from the 1950s on. As the couple were acquainted with many of the artists included, their collection was informed by their personal taste and sensibility. Its acquisition by the Sainsbury Centre opens up opportunities for new research from a historical perspective into a significantly under-studied domain of postwar practice.

Sidestepping the option to explore this solely through the lens of this collection, Moore has connected it to a broader collection of abstract and constructivist art held by the centre, much of which is related to Britain only by having been shown in this country. The consequence of joining aspects of these collections together is a large-scale exhibition of at least 120 items traversing geographical and historical contexts, decades, generations, styles and genres. What results is not an exhibition of constructivism in Britain in the sense of British constructivist works, but an exhibition of international artists, including British-born artists (some living elsewhere) whose works fit in some way into the overarching theme of Geometry and Rhythm.

As a consequence, in walking through the exhibition, one recalls the perspicacious observation of the art historian Stephen Bann, in his introduction to the 1974 publication The Documents of 20th-century Art: The Tradition of Constructivism,1 that “a confusion of terms” prevailing for decades with respect to understanding of constructivism “certainly had not disappeared with the passage of time. Certainly it has intensified.”2 He pointed to “an initial flowering in Russia” and its emergence from “a dialectical conflict between order and chaos, between the static and dynamic”.3 In highlighting developments in the decades after the war ended that worked with “space, movement and light” and “the integration of time” as a “new raw material to be moulded” among other constructive elements, Bann was pointing to neo-constructive domains that became known by various terms in the postwar period, including kinetic art and optical art, both of which are highlighted in this new exhibition yet without giving much credit to the Russian revolutionary pioneers. Bann referred, too, to constructivism as a delayed response to, or turn away from, romanticism, led by individuals such as El Lissitzky in Russia, who, in 1929, argued for “repudiation of art as a mere emotion, individual, romantically isolated matter”.4  Despite the abstract and constructive art collection holding a chair designed by El Lissitzky, it is not included among a group of chairs shown in this exhibition. 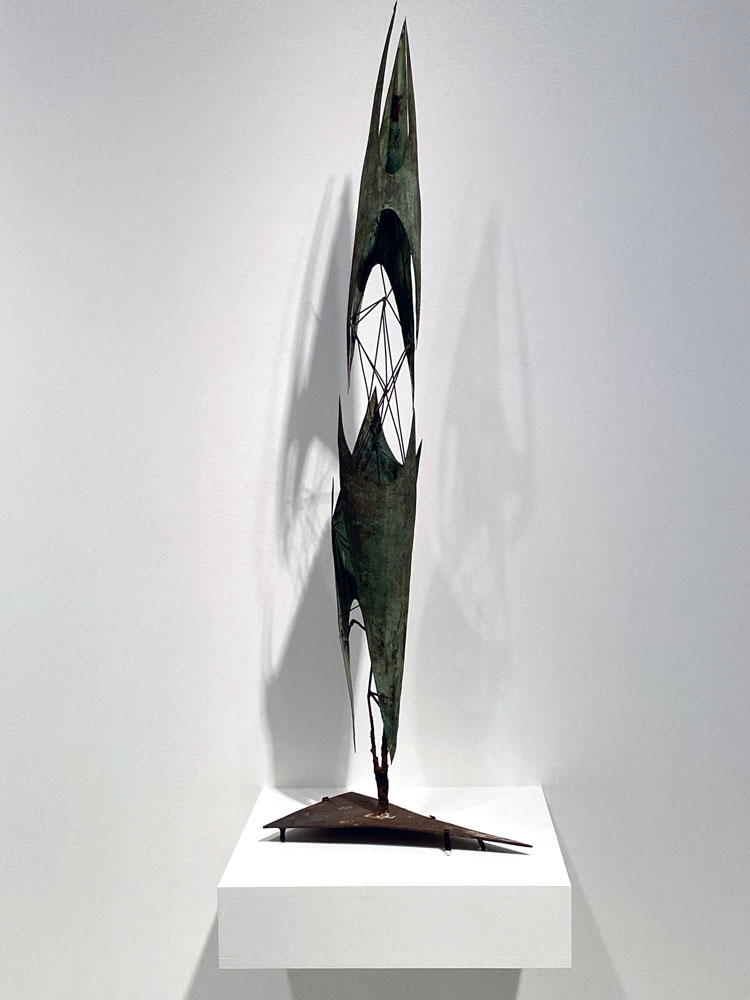 Moreover, writing in Studio International in 1966, Edward Lucie-Smith referred to the English painter Adrian Heath as a “romanticist” rather than a “constructionist.” Yet, in the opening sections of this exhibition, which attempts to root postwar British constructivism within a broader cultural backdrop of the 50s, Heath is granted rather a prominent position. Indeed, a softening of postwar constructivism into something closer to geometrical abstract expressionism is also to be found in the graphic identity for the exhibition and the cover of the associated catalogue, which veers away from the austerity of modernist typography (exemplified in the 60s with signage designed by Herbert Spencer around the University of East Anglia campus) towards something more colourful and rhythmical in its stylistic effect. 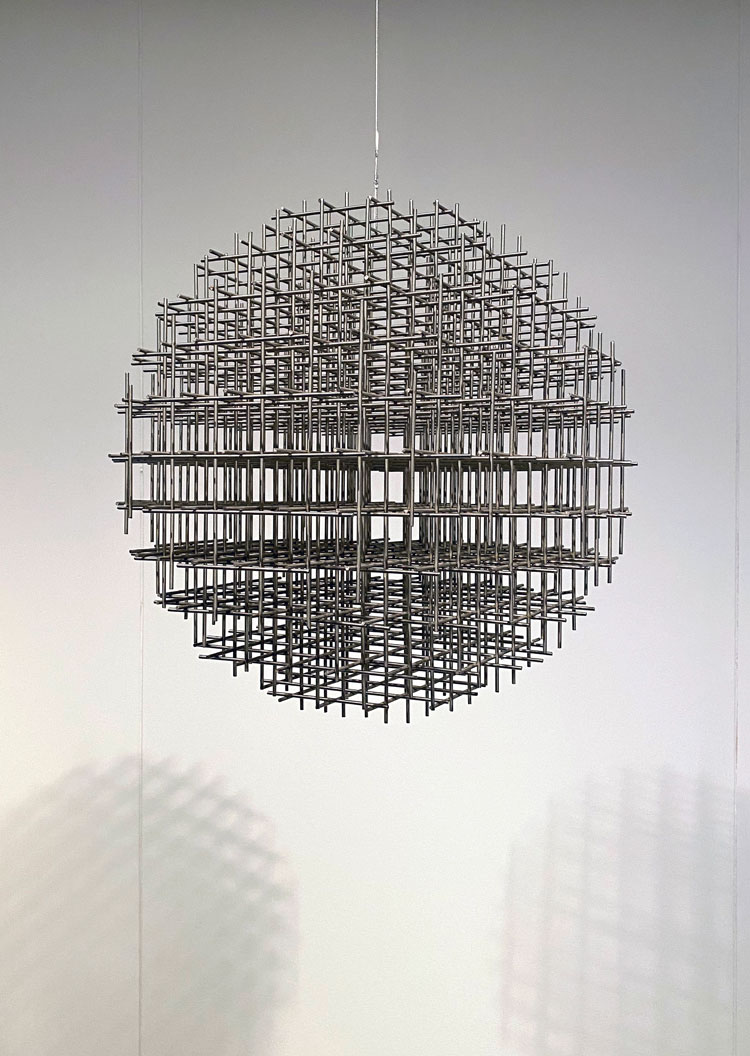 Bann’s reference to how neo-constructivist developments in the 50s extended the earlier roots of constructivism by the addition of elements such as light, time and movement was a developmental trajectory towards kinetic and optical art and the beginnings of computer art and systems art practices in the 60s and early 70s. We see some fine examples in this exhibition of works in these domains by non-British artists such as Victor Vasarely, François Morellet, Jesús Rafael Soto, Yaacov Agam and Vera Molnár. 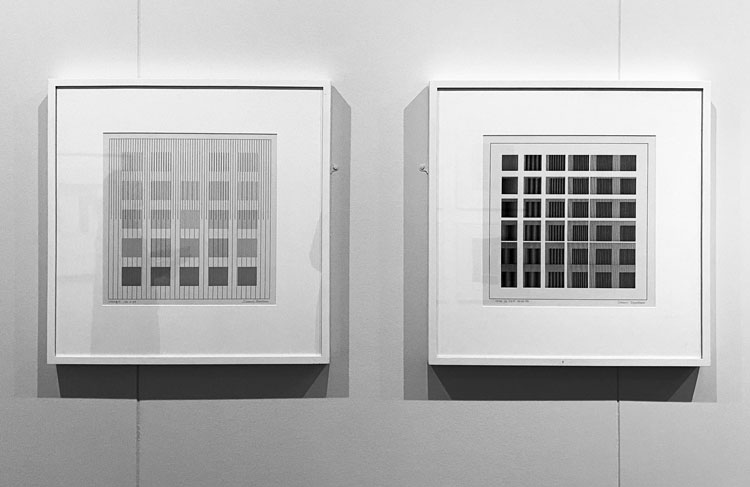 We also see some fine British-born kinetic works by Matthew Frere-Smith and computer-generated drawings from the 70s by Dominic Boreham and, side by side, constructive and system art works by Jean Spencer and Peter Lowe. We gain access, too, to the visual display of movement in viewing three extraordinary mobiles from the 50s and 60s by Kenneth Martin, the first of which becomes visible on descending the spiral staircase into the first section of the exhibition. A glance to the right while still on the stairs brings into view a composition made from aluminium, duralumin and steel, entitled Mobile Reflector, Elliptic Motif (1955). 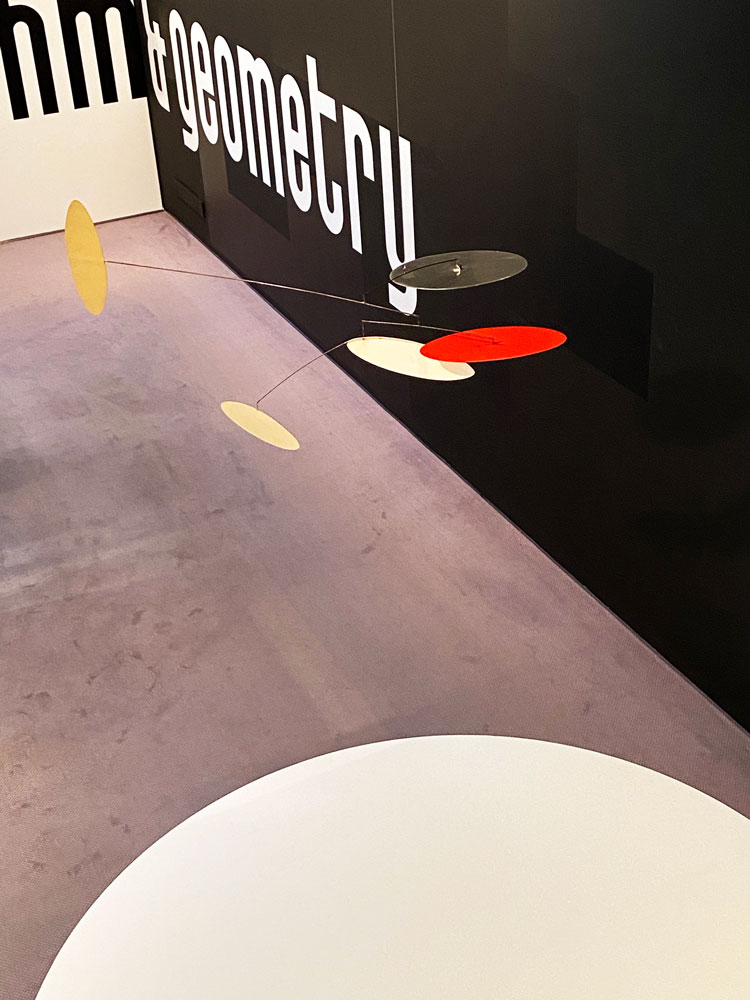 A closer look reveals a red surface to one of the moving elements, a feature easily missed in perceiving it from underneath. The shadows cast by the mobile on the neighbouring walls add to the heightened sense of drama, recalling the significant interconnection established in the 30s between Naum Gabo (a Russian emigré to England between 1935 and 1946) and leading British modernist figures including Ben Nicholson and Barbara Hepworth.

That a play with light and shade and transparency and depth was formatively worked through by these artists (none of whom is present in the exhibition) in a way that informed developments in the 50s goes unstated in the interpretative materials for this exhibition. In turn, what is then overlooked is recognition of a trajectory articulated in Gabo’s 1937 editorial essay for Circle, entitled Towards a Constructive Idea in Art, in which he observed that art and science are “two different streams which rise from the same creative source”.5 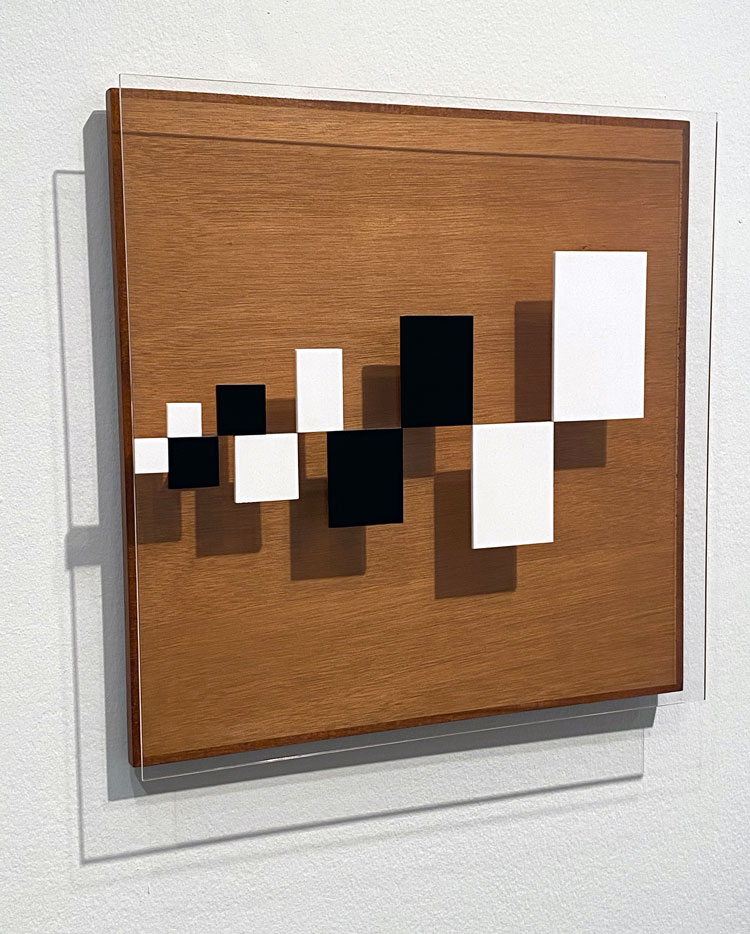 We see the evolution of this idea in the works of leading British constructivists in the 50s, including Martin, Anthony Hill, Mary Martin and Gillian Wise, all of whom explored an approach to form-finding that might today be described as generative, drawing on mathematical processes and novel application of industrial materials to mirror dimensions of programmatic, random and systematic thinking in the visual language of art. In turn, such developments related closely to emergent domains of kinetic and early computer art, where a shared concern for “chance, order and change” (to cite the title of a series of works by Martin) was apparent. 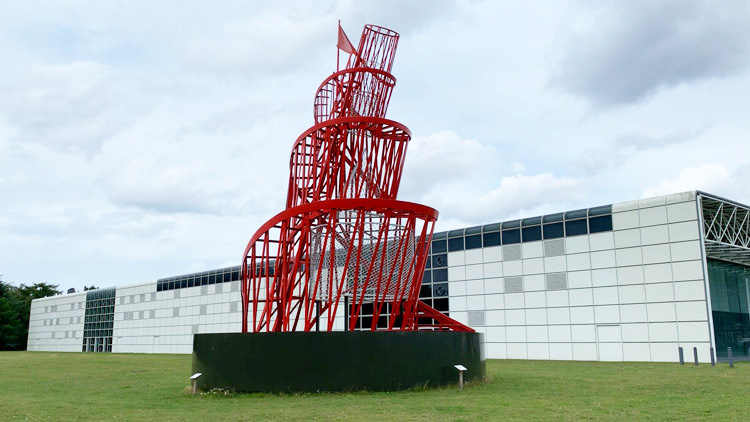 Vladimir Tatlin. Tatlinʼs Tower, or the project for the Model of the Monument to the Third International, 1919-20 (design). Reconstruction (2011) by Jeremy Dixon and Chris Milan of Dixon Jones. 1:40 scale. Photo: Martin Kennedy.

What this exhibition offers, nonetheless, is an opportunity to follow the course of development over decades of individual artists. So, for example, one can trace how 12 works by Hill, nine by Martin, seven by Wise and four by Mary Martin, distributed in different sections throughout the exhibition, both resemble and differ from each other as well as from the works of other artists who are also substantially represented, such as Robert Adams. We might also gain insight from viewing so many works by this group together (a rare opportunity in this country) to consider their contribution to a longer-term trajectory of a century of revolution in art, science and technology from the 1920s to the present. Yet, lack of attention to the pre-1950 period leaves a gap in understanding of this trajectory that, in my view, weakens its curatorial message for the non-specialist visitor. The fact that there is but the briefest of mentions given to Vladimir Tatlin at the opening of the exhibition also seems an odd curatorial omission, not least given his status as originator of the term “construct”, added to which a scaled model of Tatlin’s Tower (with its diagonal, twisted double helix) is located just a few steps away from the building. 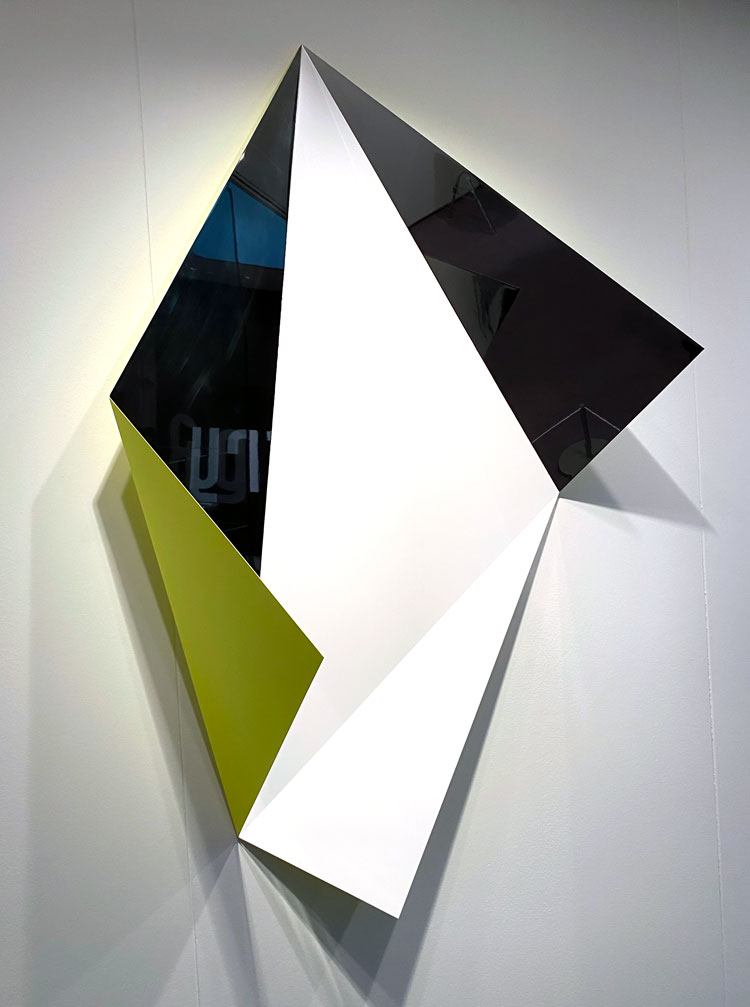 Nonetheless, an otherwise positive dimension of Moore’s curatorial strategy is an active foregrounding of works by female artists. I counted 34 related titles, including relatively contemporary works by Rana Begum and Lubna Chowdhary, as well as a work from the 70s by Tess Jaray (hidden beside a roped-off part of the main gallery) and five by Mary Webb, dating from the early 70s to 2012. Also included is a series of four works on paper by Molnár, dated 1989 and a series of lesser-known systems artworks by Natalie Dower. In a vitrine in the main gallery, meanwhile, are two primary examples of the Brazilian neo-concretist Lygia Clark’s extraordinary folded constructs in aluminium, from 1969. 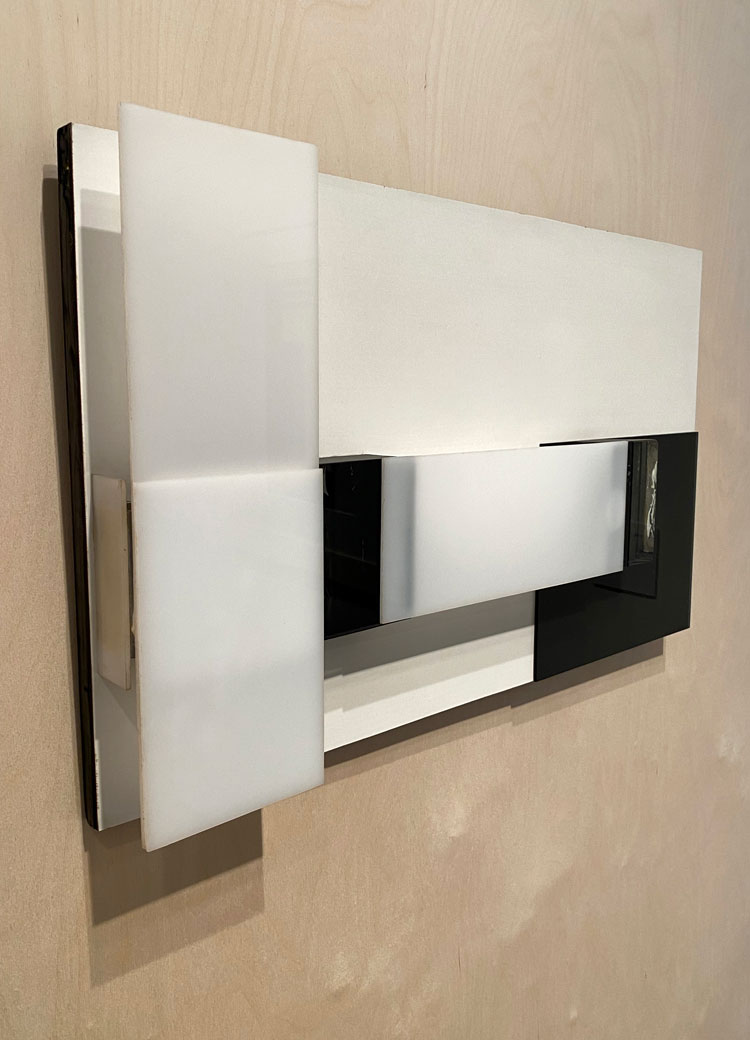 In the corridor leading to the main gallery is a work by Wise from 1961 entitled Black and White Relief with Prisms (1961). Made from Perspex, glass and Formica this has been inexplicably mounted by the exhibition designers on a backdrop of plywood, a material that they have drawn on for several works. While it has some pertinence to works of the 50s, it distracts from consideration of the use of opaqueness and transparency in a work such as Wise’s relief, that embodies the new materials of the 60s. On a similar note, leaving vertical lines between temporary screens in the main gallery unconcealed and applying a duo-tone shade of paint from floor to knee height on the left wall of the main gallery space makes little sense in terms of the nature of the works on display, which, given their own intensive lines and angles, are shown best without peripheral visual distractions. What results is a sense of lack of resolution of relation between material and interpretation. 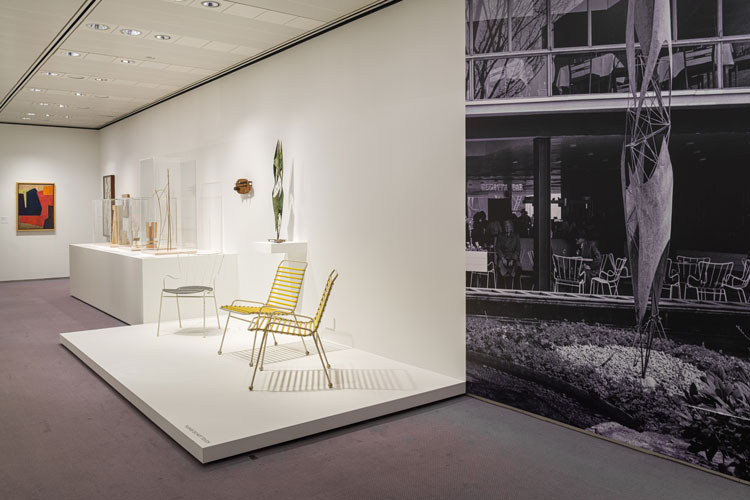 Despite this critique, there are some nicely distilled moments in the curatorial tableau; this includes the second section of the entrance corridor (to the right), where a marvellous photographic blow-up of a scene from the Regatta Restaurant during the Festival of Britain, showing chairs by Ernest Race and a sculpture in copper by Lynn Chadwick, is accompanied by a maquette of Chadwick’s Hollow Men sculpture made in copper, brass and iron. What is conveyed here is a sense of postwar structural fragility when a sense of negation and destruction is balanced by a reconstructive moment. This recalls the point at which constructivism initially developed with works from the 20s conveying the same sense of tensile dynamic forces; so, too, such a dialectic dynamic was recuperated in dualities within kinetic art in the 50s, articulated by Vasarely in his Yellow Manifesto distributed at the opening night of Le Mouvement exhibition in 1955. Such non-oppositional dualities were also present in explorations in art and science that came together in postwar constructivist and early systems art.

Among the most compelling works on display is Tlinco (1956), a screenprint on paper by Vasarely. It is situated between an array of works by Kenneth Martin, whose stature as an important international artist grows with this exhibition. 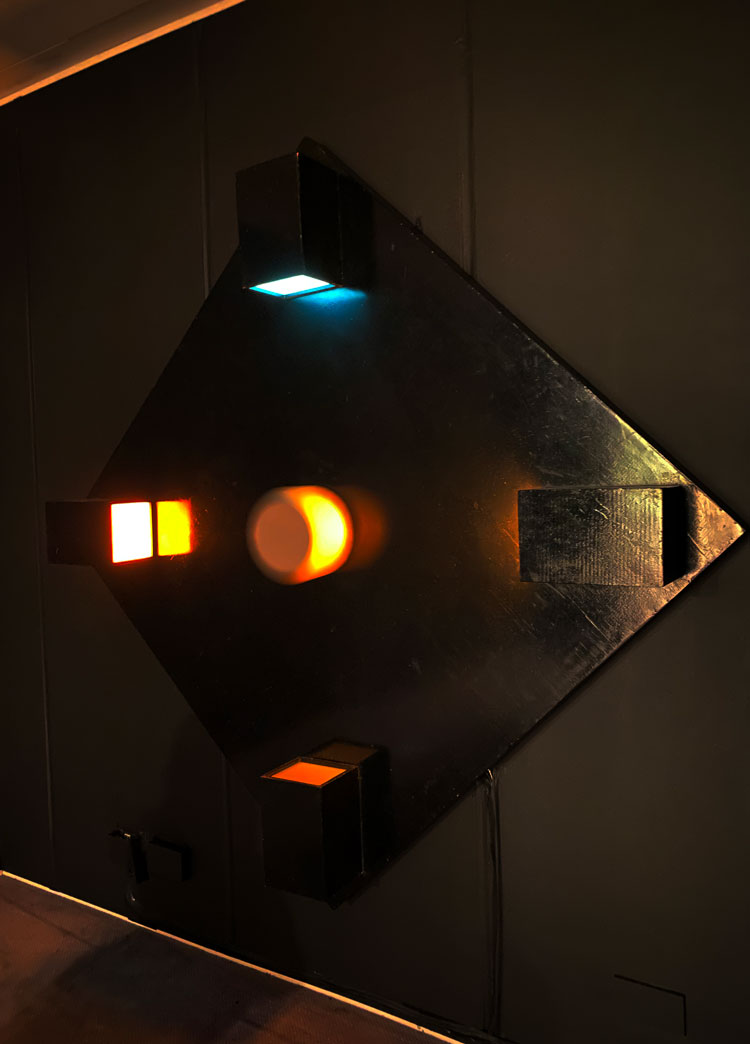 Also worth seeing is Stephen Willats’s Visual Automatic 1 (1964-65), first shown at the Oxford Museum of Modern Art in 1968 and restored especially for this Norwich installation. The connection between Willats and a constructivist lineage is important not least in his use of electronic systems, differently coloured lights, repetition and randomness impacting to a visitor-observer-participant a sense that the patterns that we see are, in fact, constructed by our minds. In other words, everything is constructed. 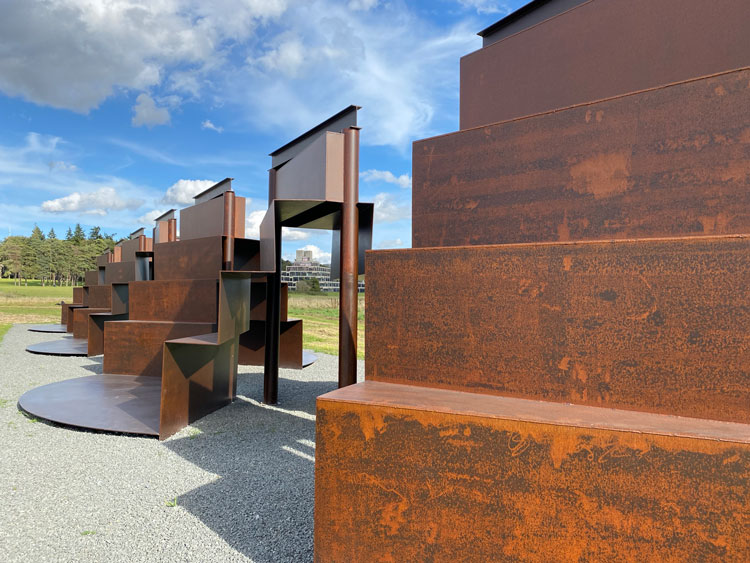 A brief walk outside the Sainsbury building leads to Anthony Caro’s Goodwood Steps (1996), recently installed in a direct line of sight from Denys Lasdun’s famously brutalist ziggurat student residences. Caro has used seven ziggurat forms, each of steel oxidised to the colour of burnt earth. Moving between Caro’s ziggurats one not only has a sense of being hidden away from the view of others, but in the depth of the work’s interiority one senses a movement in oneself away from contemplation towards externality. After earlier sightings in in Goodwood, Chicago and Derbyshire, Caro’s free-standing sculpture blends into the university’s landscape, like an act of constructed nature. 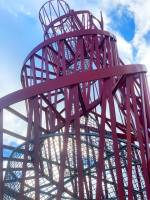