Rezi van Lankveld: ‘I pour paint to make a “happening” in the painting’

Rezi van Lankveld: ‘I pour paint to make a “happening” in the painting’

The Dutch painter explains how her attitude to painting has changed and talks about her recent paintings, now on show at New York’s Petzel Gallery, which reveal a new focus on colour 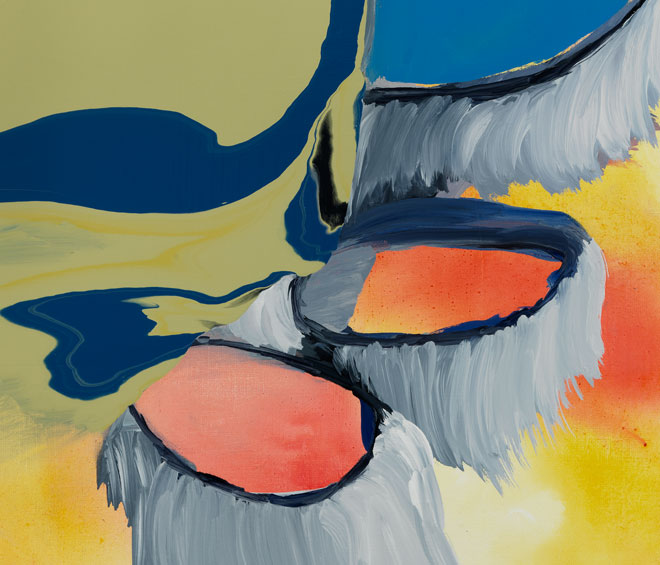 Rezi van Lankveld (b1973, Almelo, The Netherlands) is known for exploring the tensions between figuration and abstraction in her fluid, painterly paintings. Her works are often created through the manipulation of the canvas: she pours paint directly on to the board, and, through movement, intuitively makes images. For her current exhibition at the Petzel Gallery, the artist has moved away from the monochrome and duel-toned works that have occupied her practice so far. Instead, colour plays an important role in these new paintings, creating sensual and lively pictures that suggest organic and anthropomorphic shapes.

Van Lankveld graduated from Jan van Eyck Academie, Maastricht, in 1999.  She lives and works in Amsterdam.

Allie Biswas: Which artists did you look to when you were growing up and studying at art school?

Rezi van Lankveld: When I was growing up the only artist I knew and had seen was Vincent van Gogh. I had posters of his work on my wall, next to Michael Jackson.

AB: Do you remember when you first saw van Gogh’s work?

RvL: I saw it for the first time in a poster book that my parents had. There were two works I took out of there and hung on my wall: Cafe Terrace at Night and the drawing Sorrow. Then, in art school, I was looking a lot at Robert Ryman. To me, that was the ultimate art.

AB: What was it about Ryman’s art that you liked?

RvL: A canvas painted consciously like that with white paint – the aesthetic feeling of that is ultimate. It is like something that is healing.

AB: You were born in the Netherlands, studied there, and have lived there all your life. Has that tradition been influential at all?

RvL: René Daniëls was a very influential painter when I was in art school, and for, I think, everybody of my generation. His paintings are very drawing-like, totally free. At the time, if I had not lived in the Netherlands, I don’t know if I would have known his work, or seen it in person. And Van Gogh, being the only art I knew for a long time – that must have been influential. But I would rather look at El Greco than Rembrandt – I don’t identify my work with that long lineage of Dutch painting. In my studio, I don’t have anything on the wall, except for one newspaper article on El Greco with black and white images. The freedom and expressiveness of El Greco, and, at the same time, his control of every corner of the painting, is the most prominent to me.

AB: Your approach to making a painting often involves pouring and dripping paint, or moving the canvas to manipulate the paint. When and why did you start to think about methods of working that didn’t involve using a brush?

RvL: I pour paint to make a “happening” in the painting, to make a line or block without touching it, so it can be pure, like a natural thing. Most important for me is that, in this way, I can create movement in the painting. I want to put the attention on this moment.

AB: Even though your paintings are founded on spontaneity – in that they are not planned in advance and use a technique that is unpredictable – the work often suggests an image that is narrative in nature, mainly through the indication of human figures. How would you describe the content of your work: do you subconsciously have a source in mind that you are trying to recreate when you are in the middle of painting?

RvL: The way I paint is the most direct I can be with myself. In art school, I started off painting from photographs, but I soon felt this was dissatisfying. The photograph was too much in the way of me and the canvas. If there was a preconceived image that I was using, it would just be in the way of me feeling free to make the image that comes out of the process of painting.

AB: Your early paintings were noted for their sparse palette and sombre nature – these qualities have changed over your past few shows. The new works in this exhibition are vibrant and joyous. What has the trajectory been for this evolution?

RvL: The colours became more present when I started to look at the work more as collages.

AB: What is your idea of collage?

RvL: That there are different parts of the painting. Before, I was seeing it more as one – one surface, one layer. Now, I feel freer to treat parts differently. I still want the painting to be one, but I can handle different ways of painting in one painting. I used to work from one movement in one direction, like liquid drawing – one colour as a base, and black paint as drawing ink.

AB: Do you mean that you are not interested in perspective?

RvL: I think that I was not interested in perspective. I want the images to push back from the surface.

AB: And is each colour equal to you?

RvL: Colours are not equal at all, but there is no way I can explain how I choose my colours.

Rezi van Lankveld: Schelper is at the Petzel Gallery, New York, until 25 February 2017. 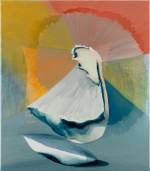 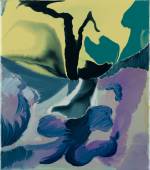 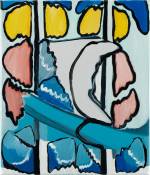 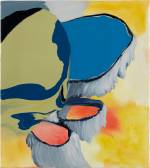 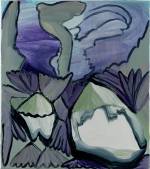 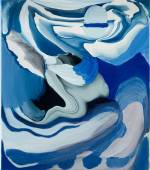 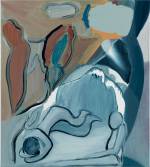