The Tudors and their tumultuous rule have an enduring hold on the public imagination. Most people who have grown up in Britain will be familiar with Henry VIII and his unfortunate wives, a story immortalised in countless films, books and plays. Nothing, after all, captures the imagination of the English like murder, intrigue and a good royal wedding or six. The faces on display in The Real Tudors are, therefore, almost as familiar as those of the current royal family, their fame undiminished by the passing of the centuries. For the curators of this exhibition, the challenge has been to shine new light on these most well known of England’s ruling families.

Increasingly, science is infiltrating the world of art history with new technologies that reveal ever more unlikely secrets. Naturally, curators want to share their discoveries, bringing interactive technology into the exhibition space. The portraits on display here have undergone forensic examinations using x-radiography, dendrochronology (tree-ring dating) and infrared reflectography. The findings can be explored by visitors using a specially commissioned app, whereby layers of paint can be stripped away virtually on a small touchscreen device.

This, then, is the fresh angle, and science has brought some interesting discoveries to the fore. For example x-rays have revealed that a portrait of Edward VI, who was only nine years old when he became king, was altered on his accession to the throne by the addition of the king’s coat of arms. Also, the boy’s stance was changed. Edward stands in a confident pose in a painting designed to imitate the masculine attitude of his father’s portraits. But at some point it was decided that his feet were just too far apart to be a convincing representation of a young boy, so they were repainted closer together.

Dendrochronology reveals whether a portrait was painted in a monarch’s lifetime, and chemical analysis of paint and the removal of layers of varnish can reveal the original colours. But none of these, admittedly interesting discoveries, really brings us any closer to the “real Tudors,” which may be why the curators have decided to include a personal item that each monarch would have held, and indeed treasured, in their lifetime. The most remarkable of these is surely a stunning jewel-encrusted ring worn by Elizabeth I. The front opens up to reveal two tiny portraits, one of the queen, and one of the queen’s mother – the ill-fated Anne Boleyn who met a grisly end on the scaffold. This touching trinket reveals much more about the virgin queen than a battery of scientific equipment.

The exhibition runs, as one might expect, in chronological order beginning with Henry VII, the first Tudor king and the man who famously defeated Richard III at the Battle of Bosworth, ending the Plantagenet reign. In what is the National Portrait Gallery’s oldest painting, he peers out of the picture, his hands resting on a ledge as if he has just popped up at a window, a red rose in his hand and a disquieting half-smile on his face. This image, painted by an unknown Flemish artist, was sent to an Austrian duchess when the king was considering remarrying, but seemingly failed to impress as no wedding took place.

Nearby sits a sallow bust of Henry made from a plaster death mask. It once formed part of a life-size effigy made for the king’s funerary procession and depicts the dead monarch with an uncanny realism, the likes of which had not been seen before in English portraiture. His cheeks are sunken, his neck sinewy and creased, his heavily hooded eyes painted as if open, but he is still eerily recognisable from his nearby painted portrait.

Henry VII’s more robust and bombastic son and heir, Henry VIII, shares a room with his father in this exhibition. His personal item, in this historical show and tell, is an impressively chunky wooden rosary. Although initially critical of Martin Luther’s protestant teachings across the Channel, Henry eventually severed England’s relationship with Rome so that he could divorce his Spanish bride, Catherine of Aragon, and marry the charismatic Boleyn. This rosary then, intricately carved with the heraldic badges of Catherine and Henry, is an unlikely survival that bears witness to the fickle whims of a volatile king whose reign changed the face of England for ever.

The last room of this exhibition addresses the legacy of the Tudor image and the search for a portrait of Lady Jane Grey who ruled for just nine days. The most enduring image, however, is that of Elizabeth I. Heralded as protector of the protestant faith, her image was copied and reworked for centuries. One such portrait, painted shortly after her death, was reworked in the 18th century to conform to the changing notion of beauty and lends the queen a plumper, rosier visage.

An expanded version of the exhibition, Les Vrais Tudors, is set to travel to the Musée du Luxembourg in March 2015 and will explore not only the lives of each monarch, but also the cultural impact they had on 19th-century Paris. At this time, la légende romantique of England and her monarchies was at its height in France, especially among artists such as Paul Delaroche, whose famous portrait of the execution of the teenage Lady Jane Grey hangs in the National Gallery in London.

This exhibition illustrates the thought processes and decision-making behind the royal image and the drive of each monarch to assert their right to rule by referencing the persona of their forebears. While the display might not constitute a “rediscovery”, it is still worth seeing, as these key portraits are rarely hung together, let alone paired with items owned by each monarch. And it is this pairing that provides the insight and the emotional punch to The Real Tudors, more than grainy x-rays charting the minutiae of shifting preparatory drawings. 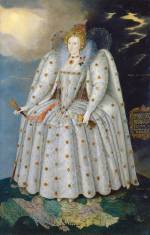 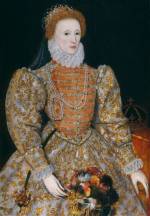 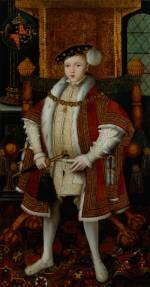 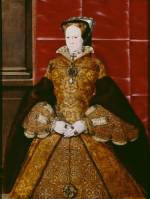