At Christmastime, every street in Paris sparkles and glimmers. Shop windows are lit up with extravagant displays, selections of antique rings and costume jewellery shine from boutiques next to patisseries and cafes displaying equally sumptuous macaroons, cakes and eclairs.

Bon-bons are wrapped around gateaux like beads on haute couture, fairy lights sprinkle over trees, and the Eiffel Tower, as always, twinkles on the horizon. The churches are lit with more candles than usual, and the evening twilight filters through stories in stained glass. The water of the Canal Saint-Martin reflects the crimson, green, blue and white lights from the restaurants along its edge, and the Seine reflects the stars.

This brilliant Parisian spectacle makes the wintertime exhibition of Cartier’s history well timed, yet unexceptional. In the City of Lights, a collection of diamonds in a dark room – however rare the rocks and however magnificent the surroundings – is only one more corner in an array of glamour and style such that the richest details are not necessarily the most fascinating. The most extravagant tiaras in the world cannot compare to the stars or the moon reflected in the Seine. Diamonds may be for ever, but there is something rarer, somehow, in catching the transient beauty of a Parisian night.

And yet the many reviewers of this high-profile show have almost consistently sung its praises, especially in the British media, as if swapping words for diamonds themselves, or as if they had not experienced the rest of Paris at that time. Or, perhaps diamonds really are fascinating to many people. Certainly there were crowds in awe of the various show-stealers: Elizabeth Taylor’s earrings from her third husband, and the necklace given to her by her fifth (and sixth) husband Richard Burton; the tiara Catherine Middleton wore for her wedding to Prince William; jewels made for Princess Grace of Monaco, and a 23.6ct Williamson pink diamond set in a flower brooch for Queen Elizabeth II. Wallis Simpson, too, had a number of pieces commissioned when she was exiled in Paris, and rejected by the British Royal family: an exquisite scattering of amethysts, diamonds and sapphires; a brooch the shape of a flamingo, a panther made of diamonds.

It is all quite extravagant, and yet writing about jewellery – or jewellery written about – is far more attractive and exciting than the jewels themselves. The stories behind the gems – the romances, the inferiority complexes, the charisma of Taylor playing to the camera in a gift from Burton – are entertaining and interesting. The jewels, when displayed on black velvet, behind glass, with security guards, are less so. They have become rocks again, devoid of glamour, which has never really been wealth, but rather, spectacle. These are the tools of glamour, the currency of elitism. It is hard to wander around such an exhibition without feeling a slight bemusement at the crowds of ordinary people bustling in front of these windows for a chance to glimpse a princess’s brooch, an oligarch’s ornament, or a movie star’s status symbol. For as much as Cartier says, and believes, that this exhibition is interesting because of the exquisite craft and design involved, or the natural dazzle of rare diamonds, it seems far more obvious that it is an attraction because of the people who have bought them. It is less an art exhibition and more a symptom of celebrity obsession, one with a clear historical precedent. Here we have a history of colonialism, slave labour and oligarchy. Here we have monarchs spending money on pink diamonds during wartime, and a rejected socialite making herself feel better by buying from the jeweller to those royals. Wandering around, it is as if the ghost of the Great Gatsby haunts the exhibition: all these jewels, all this wealth, all this materialist desire, and for what? The designers of these pieces were no doubt brilliantly talented, but those designs (more beautiful on paper than realised in rocks, it must be said) have ended up mere mergers and investments (and a huge PR stunt for Cartier) explained as art. The Grand Palais is magnificent, with its Salon d’Honneur decorated with projections like a kaleidoscopic Rorschach test, though in a way that upstages the jewels themselves.

The most interesting part of the exhibition were those displays ignored by the crowds: the art deco drawings and paintings, the costumes designed for the stage, and dresses studded with jewels for the ballet, including Ida Rubinstein’s headdress in Scheherazade – made of blue feathers, crimson and green stones, and pearls, and inspired by the designs of the Ballets Russes. Most fascinating of all was the bird made of jewels the colours of the French tricolour, in a golden cage, which was Cartier’s protest against the Nazi occupation of Paris during the second world war. A caged bird, of course, where the jewels do not matter so much as the principle, which in this case is a noble and brave one, with a story that runs deeper than the many marriages and romantic gestures that Cartier has cast in diamonds through the ages. This single piece saves the exhibition, reminding us that some things are worth saving, some things are precious and rare. Freedom and spirit, whether expressed through diamonds or not, seem all the more desirable having spent time in Cartier: Le Style et l’Histoire. Walking outside into the Parisian night, the city aglow with its many natural (and not so natural) lights and all that glitters, we can be in awe once again. 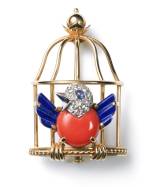 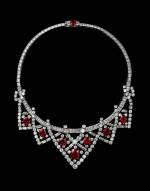 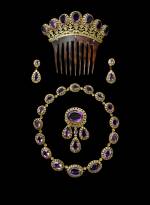