Re-Found: Sara Beazley, Charlotte Hodes, María Noël presents work that uses a wide range of source material from literature, art, history, landscapes and textiles and in doing so focuses on the creative processes of three women artists. Primarily interested in Hodes’ work since she won the Jerwood Prize and seeing her presentation of new work at Drawing Now in Melbourne in April 2013, it was a bonus to see the work too of Beazley and Noel.

Sara Beazley has worked in London, Hong Kong, New York and Paris and uses printmaking techniques and textiles in layering methods to explore the ongoing changes to the urban environment, creating unique prints. Postcards, stamps and found images combine with the sense of place, particularly in Kowloon, where she recently had a studio.

María Noël’s imagery traverses physical and intellectual travel using references to literature. The daughter and granddaughter of Argentinian writers, Maria was hanging work for the Pinta Art Fair in London, when I visited the exhibition. Andrea Harari, originally from Argentina, is one of the Founding Members of ARTE BA, the contemporary art fair of Buenos Aires, which she organised since its inception until 1995. In 2010 she was appointed as the London Manager for PINTA UK, the Modern and Contemporary Latin American Art Show (4-7 June 2013).

María Noël’s new work is a series entitled “What do we talk about when we talk about art”, collaging ideas, quotes and references. She describes collage as relating to the spirit that defines her as an artist, “Taking a bit of everything everywhere, of giving new meaning to the discarded, of generating chance meetings”. María invokes memories with great subtlety using personal letters and handwriting: “Through writing her art becomes interwoven, a code that, because unrepeatable, shows that each being is unique. This is the inner logic that has brought her to the [artist’s] book as a mode of art, a means of expansion and synthesis. Her work is also a register of a process of poetic transformation. Yet, in its aperture, the manifestation of her subjectivity is not closed in on itself; instead, it opens up to relate to the viewer.” (Mercedes Casanegra, ‘In the Weave if Writing,’ María Noël: on books, labyrinths and poets, Buenos Aires, Argentina, 2009, no pagination)

Charlotte Hodes work is based in perceptual drawing, particularly life drawing: the female form is beautifully applied, draped, contained and dancing on large collaged works and fine ceramic pots as silhouetted images: two of her works are in this year’s Royal Academy Summer Exhibition. Dressed in Grecian robes, corsets, hooped skirts or flapper dresses, the images are placed within and alongside textiles, which characterise her work: [the figures] “coexist with elements that have over decades been represented and re-represented in the fine and decorative arts: drapery, cloth, ornament and pattern. They acknowledge their origins but exist, I hope in the present as past incarnations. They are a celebrations of the art histories from which they have come, whilst existing in a painterly space with my rules.”  The hours of detailed work with tiny fragments of paper, fabric and decorative motifs explore the diverse manner in which the women have been presented in art history; the decorative links to the domestic, and the manner in which so much of female activity unnoticed. Charlotte explains her process, “Drawing is the way in which I begin. I make pencil drawings and take photos from observation, which enable me to construct images in my mind. I do not invent. The drawing becomes modulated and changed through subsequent drawings, tracings, digital manipulation or as hand cut paper stencils according to how I intend to use them.” (Charlotte Hodes: Silhouettes and Filigree, Marlborough Fine Art, 2 December 2009 – 8 January 2010, p.1). 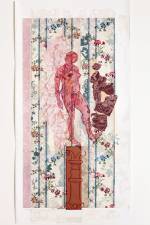 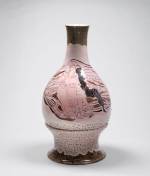 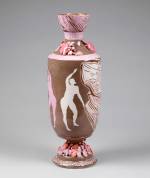 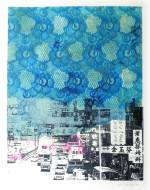