Good Figures: An exhibition of the female form depicted by 30 contemporary female artists

Good Figures: An exhibition of the female form depicted by 30 contemporary female artists

Thirty contemporary female artists, ranging in age from 24 to 82, celebrate the enduring appeal of the female form in everything from photography to drawing, ceramics, film and sculpture

The curator of Good Figures, Candida Stevens, founder of Tint-Art, sought to address the diverse activity among contemporary female artists. The ages of the 30 artists in the exhibition range from 24 to 82, and their work includes painting, photography, drawing, ceramics, film and sculpture. All were asked why they portrayed the female form, and their responses are published in the catalogue that accompanies the show. In her foreword to the catalogue, Anna McNay highlights the sad state of affairs in the contemporary art world, where women artists continue to struggle, “to bring women artists, past and present, on to an equal footing with their male counterparts, in terms of recognition, exposure, and even just pay”.1

Joyce Cairns has one large painting on show, The Magic Gate and Other Stories, a richly evocative work, in which her debt to a range of influences is evident, from pre-renaissance painting, the flatness of Byzantine art through 19th-century symbolism to German expressionism and the work of Max Beckmann. Drawing, too, on her life in the fishing village of Footdee, at the mouth of Aberdeen harbour in the north-east of Scotland, Cairns’s work is a microcosm of the wider world, a stage on which universal dramas are played out. Indeed, the power of her work to speak volumes was revealed when her War Tourist series was exhibited in 2006 at the Aberdeen Art Gallery, attracting almost 30,000 visitors. In her work, we can identify the strong female urge to create narratives and to explain identity through inherited experiences. She explained that her first war painting followed her mother’s death. She illustrated the family experience of her father’s war by using aspects of his wartime kit, such as uniform, thus emphasising the universality those pictorial elements would evoke. She subsequently carried out further research at the Imperial War Museum and the National Army Museum in Chelsea. Of her wide-ranging use of the female form, she explains that she is artist-as-narrator, and at times subject. Her females are victims, and also employed to epitomise lust, betrayal, hope or fear, compassion, loneliness or loss.

The Magic Gate and Other Stories is set in the 1950s and was inspired by Cairns’s childhood during the postwar years. The stories were read to her and her brother by their mother, and it is the memory of this that the artist has evoked, using pop-up style theatre imagery and characters. Cairns was mindful of the deprivations and heartbreak the war had inflicted: the personal trauma that was manifested in individuals lasted long after the war had ended – her own mother spent four years, from 1956, in a psychiatric hospital. During that time, Cairns’s sister Evelyn became her surrogate mother, and she painted The Magic Gate as a tribute to Evelyn following her death in 2010.

The immediately recognisable forms of Eileen Cooper, Keeper of the Royal Academy, indicate her success and recognition since the 1980s, when her work was selected for the cover of The New British Painting, the book that accompanied an exhibition of the same title organised by the Contemporary Art Centre, Cincinnati in 1988 that subsequently toured the US.2 Perhaps the American curators were more receptive to Cooper’s strong female forms than their British counterparts at the same period, and they were keen to identify a new generation of artists to follow the well-acknowledged giants: RB Kitaj, Lucian Freud, Frank Auerbach and Francis Bacon. Feminist authors and artists were a more overt cultural force in America than Britain at this time. Drawing underpins Cooper’s strong imagery, which seeks to elevate female rituals; motherhood is demystified by the inclusion of babies co-existing in a natural manner, within the emphatically enclosed picture plane with their artist/mother. In Good Figures, Cooper is matter-of-fact about the female form: “The female form is always my starting point. It just is.”3

Irene Lees lists as her influences: Emily Dickinson’s poem I’m Nobody! Who are you?; the demonstration in London against the war in Iraq in 2003; and the autobiography of Edward Said, who was a Palestinian exile. Long interested in ideas of entrapment (literal and metaphysical) and of constriction (chastity belts for erotic purposes), Lees addresses the female obsession with body image, and the pressure women are under to conform to male expectations. Visual invisibility, using ink on blackboard, explores what Lees describes as “a way of giving meaning to these notions by using a continuous line to construct a burqa which appears both vacuous and inhabited, and at the same time creates an ‘uncluttered’ and anonymous image to make my point”.4

Charlotte Hodes’s work occupies the interface between feminist thought and the history of the decorative arts. Last year, she exhibited a large body of work using paper cut and ceramic techniques to interrogate the seminal 19th-century publication The Grammar of Ornament (1856) by architect and designer Owen Jones5 and investigate the relationship between the female form in painting and the decorative arts. Three paper cuts and three ceramic vases from that series are included in the Good Figure exhibition.

Hodes’s female form here asserts her refusal to be simply a decorative presence; in the process, she escapes the rigid rules of traditional roles and disrupts the visual order. She recalls: “I was a student from the late 1970s when political feminism was prominent among artists at the Slade. This was quite tough for me as these artists moved into film, installation and performance. I knew by then that I was at heart a painter and committed to the material of paint as a powerful means of communication. I struggled with how to find my own path.”6

Based on perceptual drawing, particularly life drawing, Hodes’s females are portrayed in silhouette form, draped over, or dancing on, large collaged works and ceramic pots. She explains: “The vase is a surrogate for the female figure and the form of the vase carries its own art history that informs one’s understanding of what is represented on it. I feel that my female silhouette, depicted on the vase, makes a claim to this, the status of an ‘archetypal’ form. I am not concerned with sculptural form per se, or with the material of clay, but with the surface that is an alternative substrate to the canvas. The vase shape is therefore part of the image.”7

The female figure within a decorative context enables the concealment of her nudity and thus establishes a screen by which to protect the artist’s vulnerability: “I hope that the figures engage with the long tradition of the decorative arts and, although they might appear compliant, my work does not support the traditional notion of the male ‘gaze’. Rather it concerns the figure that has chosen to be represented: pleasure can thus be experienced through the membrane of the silhouette. In formal terms, the choice of silhouette enables a light-hearted quality to be presented; as they are not fully executed forms, humour can be evoked without undermining the seriousness of the work. This also is a challenge to the ‘hard-won image’, which was also a dominant force while I was a student at the Slade. And that is not to say that making images is easy, as they never are. They are always a struggle.”8

• The Jerwood Gridshell Space, located at the Weald & Download Open Air Museum (wealddown.co.uk), was runner-up for the RIBA Stirling Prize in 2003, and its innovative design has won national and international acclaim. Within the superb building made of curved oak beams, curator Candida Stevens is having a shell of a woman’s body constructed to hang all the work, a structure that promises to be a fine installation in itself.

• Good Figures showed at the Mall Galleries, The Mall, London from 9 to 14 February 2015 before travelling to the Jerwood Gridshell. 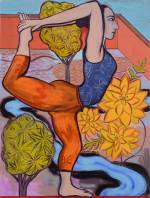 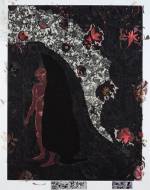 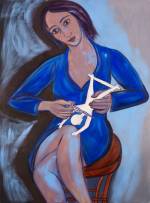 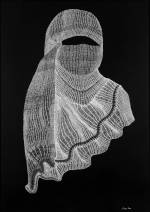