Art First in London have been showing the work of one of South Africa's most significant and interesting artists, Karel Nel. The exhibition was first shown at Art First in New York. Based in Johannesburg, Nel is Associate Professor of Fine Art at the University of Witwatersrand. From there he travels for six months of each year in the Pacific region, to Polynesia, Micronesia, Australia, Easter Island, Réunion Island and to New York city. His colleague at the University of Witwatersrand, David Bunn describes the way of life and the impact on Nel's work:

Nel's obsessive travel is a direct source for that material that constitutes his art. Through his journeys he attempts to research those remaining places where precapitalist forms of value persist, where objects used in transaction have a charged ritual significance and weave distinct communities into the same web of obligation. In such places fashioned objects are not inert. Objects moving in the symbolic order as gifts or icons have a role in constituting locality … island communities especially tend to live at a human pace and scale, in harmony with a natural order. Images of island chains and volcanic cones are recurrent in the artist's work … volcanic activity signifies the provisional nature of all matter, and welling up over the crater rim, magma tells a story of creative processes at the fiery core of the earth.1

Karel Nel's knowledge and expertise of African art underpins his approach to art; the implied political standpoint is also central to his work. Jessica Dubow whose essay in the small catalogue accompanies the exhibition, Status of Dust: A Profane Spirituality, A Radical Materiality, describes Nel's work as a 'redemptive aesthetic'. 'Status of Dust' addresses notions of time and information that relate to birth and death. The work displays the artist's interest in site-specific pigments and initiatory practices, and art within sacred contexts and remote cultures. The works refer to journeys in time, historically and spiritually. The use of particular ochre, for example, links a work to a specific place. At the same time the works also represent a universality of experience.

Unorthodox materials give the works a particular resonance giving several layers of meaning. His work shows the absorption of culture and practice such as that of the Australian Aborigines, in particular links between birth and place. Works on tapa cloth, a rare fabric made from the pounded bark from ficus trees in Polynesia and Micronesia allude to ghostly presences and ancient rituals. Nel's works emphasise the process of creation which in turn links to the shared experience of ancient but still living cultures that are often forgotten in the modern world. The use of certain materials reinforces this message: volcanic sand and black Carboniferous materials refer to prehistoric times, to the geological history of a place. Referring to the work 'Cultural Ground', Dubow explains:

[It] not only relates to contemporary scientific advances that illuminate the site specificity of the geological record. It also speaks of a 'topological' aesthetic, the creative understanding that where something is situated has everything to do with how its substance is structured. Thus the work does more than represent a particular spatial encounter. It uncovers the layers that come between us and the granular earth. It pays attention to the sensational textures that form the perceptual base of place. Indeed, it is an art that is topological precisely because it avoids the easy reduction of nature to an image, and rather allows forms to surface like fossils from their natural matrix.2

From his preoccupation with materials and materiality, Nel inhabits an area informed by science, art and spirituality. The earth is seen through geology and genius loci, memory and myth. He uses a variety of ingenious methods such as floating heavyweight handmade paper in a liquid medium to create island shapes, archipelagos and delta shapes that are the subject matter for the work. Such a process involves a degree of immersion, quite literally in the very substance of the work. Green volcanic sand is then swept across the picture plane. Nel goes so far as to pulp and recycle 18th century French manuscript paper, 'the very stuff of the Enlightenment'.3 The finished works are highly disciplined abstract works which precipitate a journey that navigates different realms of being.

In 2001, Karel Nel was Artist in Residence at the Ampersand Foundation studio in New York, a few blocks away from the Twin Towers until just four days before September 11. Early in January 2002 he returned to New York and collected material from the site of the World Trade Centre, which he incorporated in a number of works including 'Monument' and 'Eleven'. The artist explains, 'the matter itself contains the molecular memory of those events encoded in it; events which shook New York, the world, and that will shape the beginning of the 21st century'.4 David Bunn describes the significance of Nel's September 11 works:

His interest in these works is not in recording details of the catastrophe. It is for him instead a significant marker of a shift in global subjectivity towards an irrevocably transformed understanding of collective trust. The violet background in the works captures his first view of the eerie acetylene cast of the site when hundreds of rescue crew labored beneath desperate arc lights. Similarly, the brown hues result from the use of soil collected at Ground Zero that has a specifically forensic and affective relationship to the disaster.5

Nel's images acknowledge loss but they have also been created to dignify the void created by such a shocking act.

But to look at these works is also to see how their abstracted slabs of earth begin to cue a perception of the Twin Towers. Ruins, dust, aura: the absent presence, the molecular memory, of that which is not physically there. 'Monument' and 'Eleven' … are also about how we may take recourse to the inhibiting spirits of the past and of place. In this sense, the very materials of these works begin to intimate the dust of memory from which new flights of imagination might depart.6 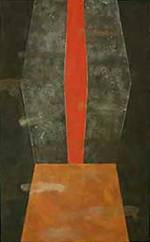