We all have private mythologies extracted from our experiences and interests. The extent to which these crossover into common mythologies depends on where we place ourselves, or are placed within society. If we were to assemble the characters in our minds the way Peter Blake did on the Beatles’ Sgt Pepper album cover, we would likely find a cast of the mighty, magnificent and mundane.

It is worth bearing that in mind when walking around the brilliant, eclectic and occasionally overwhelming Raw Vision exhibition of Art Brut at Halle Saint Pierre. The peculiar characters, portrayed in a far-reaching array of works, are judged and interpreted in the same minds, our minds, that are casually filled with entities such as Santa Claus, Ronald McDonald, Tintin and Mickey Mouse. The mythologies on display here have, at the very least, the benefit of originality.

To exhibit a diverse international range of singular artists under a category such as Art Brut or Outsider Art is to invite criticism. It would be easy, and perhaps facile, to claim the terms fetishise mental illness, make a virtue out of obscurity and a mascot out of, often unpleasant, personal circumstances. Such a “defence” of the artists in question risks patronising them to the point of powerlessness. In truth, all artists are essentially outsider artists until they are brought inside, whether through commercial success, academic approval or critical acclaim. Raw Vision avoids any tiresome, paralysing arguments over voyeurism. Instead, as with the influential magazine it was born from, the curators of the exhibition rightly assume we are all voyeurs and simply let the art and the artists speak. The results are frequently astonishing.

Given the number of works and artists on display in Raw Vision, it is helpful and perhaps inevitable that common threads are identified. Rather than being constricted by imposed themes, the artworks suggest at least two recurring subjects, which chime with Freud’s twin drives in life – Eros and Thanatos – sex and death. The shadowy settings and the furtive ink lines in Malcolm McKesson’s remarkable sketches give the sense of the characters becoming almost animated in the half-light. Hailing from his once-secret sado-masochistic transgender book Matriarchy: Freedom in Bondage, they are fascinating glimpses into an underworld of submission and ecstasy. In Johann Korec’s ink and aquarelle life studies, the need for intimate contact is no less of a compulsion, even if the eroticism is tinged with a curious innocence by comparison. Josef Hofer’s uninhibited portrayals of naked figures, meanwhile, demonstrate the human form as alien as it really is.

Barely an exhibition goes by without the Grim Reaper in attendance. His presence here is more explicit than most. The magnificently intricate art of Nick Blinko finds its most basic expression in mortality-fixated scrawls (Numbskull, 1996 and Your Lot, 1998). His are worlds of sacrosanct profanity, where desolation is interrupted only by sudden outbursts of the grotesque. His scenes are utterly unfamiliar and yet somehow too close. They are also very funny; a grim joke to which human existence is perhaps the punchline. It is similarly tempting to see the paintings of Viljo Gustafsson as a series of memento mori, but they are more interesting than that. The skeletal recurring Death figure is not simply a villain, rather it appears, in works such as Death Keeping House for the Poor Man (1984) and Girl and Snake (1982), that he has his own wants and needs.

All endeavours, however successful, are records of limitation. Questions of power and impotence are raised again and again throughout Raw Vision. There is a distinct element of pathos in the work of Johann Garber, sketching places he will likely never visit, at night in a psychiatric hospital. Yet his maps of imaginary places are fine examples of the artist in the role of world-building deity. At times, it is a case of reinvention rather than creation. The barflies, prisoners, rabbis and soldiers of Renaldo Kuhler’s paintings seem to belong to a recognisable early 20th-century past that never was. If we can stretch the term “in fact”, they are inhabitants of Rocaterrania, an invented country Kuhler placed between New York and Canada.

Other artists have aspired if not quite to a god’s eye view, then certainly to a mystical one. In the work of Augustin Lesage, a coal miner who began to hear voices underground telling him to paint, we have what resembles a new religion, with traces of Egyptian hieroglyphs, stained-glass psychedelia and Buddhist temple engravings. Alexander Lobanov’s gun-toting portraits may be more earth-bound, but they still portray a messianic spirit, posing as a decorated imaginary hero of the now-evaporated Soviet Union.

The often simplified connection of Art Brut to childhood is evident in different ways in Raw Vision. The inclusion of sexual imagery within the half-menacing, half-humorous cartoon symbolism of Friedrich Schröder-Sonnenstern, for example, makes the work seem highly charged. Whether this is more due to the artist’s neurosis or the viewer’s is debatable. Separated from the wider The Story of the Vivian Girls … (as explored in Jessica Yu’s documentary In the Realms of the Unreal), Henry Darger’s juxtaposing of drawings of naked prepubescent girls with arcane male soldiers is powerful, in not entirely comfortable ways. Are we seeing perversion where there is innocence, or vice versa? Is the problem the content or intent of the work, or the way we have grown to see it? In a different sense, Miroslav Tichý’s blurred clandestine snapshots of female strangers are just as troubling. The question “Is this invasive perversion or art?” may be a false dichotomy. Might it not conceivably be both? Some of the most impressive artwork on display at Raw Vision is by Adolf Wölfli, an artist with extraordinary visionary abilities, who was also a periodically deranged and violent child abuser. Though we would like it otherwise, the two are not mutually exclusive. It forces us to ask ourselves, are we viewers or jurors? The reassurance of separating the art from the artist is a false one: we know, deep down, that whatever art is, it goes way beyond mere aesthetics.

For many years, it has been fashionable to claim that the life of the artist should have no bearing on our appreciation of the art, as if experience is somehow soap opera and too frivolous and unseemly for our higher concerns. This is as unconvincing subconsciously as it is dishonest consciously. The imagination is wholly intertwined with memory, context is inescapable, and art, and the appreciation of it, is endlessly reflexive. We may well take interest in an isolated work of art, but the mind, and our interpretations, works through associations. Whether our view is expanded or narrowed is debatable, but it is certainly deepened by knowledge that, to use only cursory examples, Schröder-Sonnenstern had been a quack doctor and horse thief, George Widener is a former cold war spy, Willem van Genk was haunted by the Gestapo figures who once interrogated him, or that the melting, hallucinatory baroque art of Vonn Ströpp is made by an artist who has changed his name 123 times. We may like to assert that painful childhoods, nervous breakdowns and reputed celestial encounters do not matter and the art is everything, but experience is integral to inspiration. Though they have an intriguing style (the American civil war if it took place in a nursery), standing on their own, Darger’s panoramic battle-scenes are not necessarily impressive in terms of colour and composition. When you are aware of where they come from, how and why, they attain an aura of greatness.

Though it is referred to soberly and in passing, mental illness may be Raw Vision’s elephant in the room. It is evident in the biographies of many of the artists and also in the artwork. Certain stylistic traits recur throughout; infinitesimal attention to detail, the metamorphosis of forms, transcendental encounters (both devotional and tormented), the obsessive repetition of patterns and a supposedly “pure” disdain for the practicalities of selling art (paintings on both sides of canvas for example). These may arouse prejudices we bring, through either fear or romanticism, which nevertheless fall apart when we see beyond the surface. Indeed, the contrasts make the exhibition a success as much as the comparisons; how the minimalist bold icons of the Gullah folk artist Sam Doyle react with the teeming and looming monochrome of Madge Gill or how the savant modernisms of Widener, Van Genk and Pavel Leonov share similar themes but seem to ricochet off one another. There is levity, too, that speaks of defiance, escape and joy, even in August Walla’s paintings designed to ward off harmful presences. The much-cited horror vacui trait, in which all empty space on the canvas is covered with texture or colour, may seem the product of obsession in some creators of Art Brut. Equally, it may be the case, like all art, that it is simply made in defiance of oblivion.

Raw Vision achieves, marvellously so, what all collective exhibitions hope to achieve; it engages, entertains, subtly alters the perception of art and, above all, it introduces a wealth of artists to pursue further in a multitude of directions. It feels as much as a beginning as a retrospective. It is eclectic also in form, featuring Michel Nedjar’s dolls, Shinichi Sawada’s totemic creatures, Eugene von Bruenchenhein’s pin-up photographs of his wife, François Monchâtre’s contraptions and stills from Ferdinand Cheval’s Palais idéal and Nek Chand’s Rock Garden of Chandigarh. With some work skirting dangerously and unintentionally close to kitsch, the exhibition is by no means perfect, but perfection is overrated. In terms of painting, the thought-provoking nature of Raw Vision means it is not difficult to imagine slipping the work of Max Ernst, Marc Chagall, Leonora Carrington, Paul Klee, William Blake or Jean-Michel Basquiat into proceedings without it necessarily jarring. Perhaps there is a hope then that, one day, we will be able to abandon the idea of insider art along with the unnecessary outsider prefix. 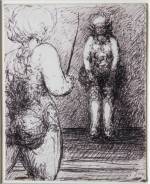 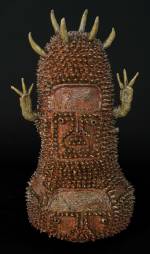 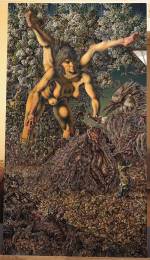 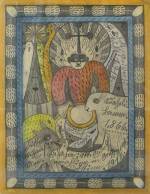