Rapture: Art's seduction by fashion since 1970

Rapture: Art's seduction by fashion since 1970

Until visiting this exhibition I had, naively and unconsciously, assumed that contemporary art and fashion were much the same thing. Damien Hirst, Stella McCartney, Tracey Emin, Kate Moss, Alexander McQueen — all seemed perfectly interchangeable in the pages of Hello and OK! and equally at home on either the art or fashion pages of the broadsheet newspapers. 'Artist', or 'designer' were just sub-categories of the defining idea of the late 20th century — 'celebrity.'

'Rapture' reminds us that the merging of art and fashion is, in fact, a fairly recent phenomenon. 'Pre-contemporary' artists were superior to mere clothes designers; 'fashion' had an unpleasant whiff — of manufacturing, mass-production and money — and of pandering to the tastes of the credit card wielding public. Fashions were transient, disposable. Last year’s clothes were not just obsolete, they were laughable. Hysteria greeted holiday snaps from the mid-1970s — very flared flares, orange shirts, ties that made a kipper look skinny, boots that could have served the Wermacht — they may have been designed by Yves St. Laurent but, in retrospect, they were truly, madly, bad.

But designers had fashion on their sides. What’s fashionable is what’s hot and desirable now. Designers had publicity, glamour, money and (temporary) adulation — but they craved respect.

Artists were distinctly unfashionable. It was quite honourable to sell nothing, to starve in your garret and wait for your prices to rise posthumously. Artists had respect and posterity — but they craved prosperity.

All this began to change with the turmoil of the late 1960s, when preconceptions — along with bras and Draft Cards — were thrown onto the cultural bonfire. Andy Warhol made one of the first great leaps from fashion to art. He made his fortune as the King of Madison Avenue women’s shoe advertising and launched himself into 'Art' with the all the marketing and self-promotion skills learned in fashion.

The 'collision of these two glamorous and fascinating worlds' — as described in the press release — probably began with Warhol, although his work doesn’t feature in the exhibition, he would, no doubt, be delighted with what it contains: a playful melange of forms, textures, installations and cross-over ideas in just about every media.

Some of the collaborations are more successful than others — but they all have a sense of fun and a genuine attempt to engage at a more accessible level than the usual esoteric and po-faced fashion galas or the banality of much contemporary art.

Working in new disciplines and producing work for different audiences seems to have re-lit the internal spark for many of the artists, designers, models and photographers. Instead of producing more of the same they have actually taken up the challenge, and remind us why some of the YBAs were such a breath of fresh air — before over-exposure and over-payment staled their infinite variety.

In the entrance stands an ice-sculpture of Kate Moss (wearing an Alexander McQueen cape) moulded from life by Marc Quinn. Luckily, the refrigeration seems more reliable than that in Charles Saatchi’s larder, because Kate’s features and those of her icy clothes are remarkably crisp.

'Rapture' tries, not entirely successfully, to provide a chronological interpretation of the collision between art and fashion. From the early 1970s is a black & white photo-text piece by Victor Burgin, said to 'criticise the ideology of consumption and fantasy which fashion conceals'. Perhaps this is intended as an ironic opening since the rest of the exhibition is a wholehearted, tub-thumping, all-singing, all-dancing celebration and glorification of conspicuous consumption — and one small side room is full of shopping bags from Chanel, DKNY, Agent Provocateur, Versace and other up-market retailers.

In the 1970s, the revolution in fashion photography brought about by Helmut Newton, Guy Bourdin and Arthur Elgort also spilled over into the art photography of Nan Goldin, Cindy Sherman and others. In New York, in the 1980s, street styles were spotted, adopted and re-branded in the works of Jenny Holzer, Keith Haring and the graffiti artists Kano. T-shirts with slogans and individualised jackets became art objects. Fabric began to be used as a sculptural medium, here illustrated by Beverly Semmes’ dresses — vastly oversized, filling whole rooms. Another fabric artist, Karen Kimmel, will be 'performing' clothing production each Saturday from 2-4pm.

In the 1990s, artists were commissioned to design fashion retail spaces, the more exclusive of which have come to resemble gallery spaces — pioneered by the Commes des Garcons shop in New York’s SoHo.

'Rapture' goes on to highlight recent and real collaborations between artists and designers, including the 'Vogue' that brought together Kate Moss, Tracey Emin, Marc Quinn, Jake and Dinos Chapman and Sarah Morris.

The closing section of the exhibition underscores Chris Townsend’s imaginative curatorial direction of 'Rapture' (unlike the nearby 'LaChapelle' exhibition, which treats bland, celebrity-flattering portrait photography as though it is a major breakthrough in style). The theme is 'violence against the fashion object' — E.V. Day’s 'exploding' dress sculpture; Graham Dolphin’s cleverly 'vandalised' fashion magazine covers; and Izima Kaoru’s staged photographs of 'murdered models'.

Two fields whose practitioners often take themselves far too seriously — art and fashion — are well served by this funny, insightful and iconoclastic exhibition. 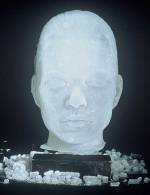