Sonia Boyce, Helen Cammock, Rory Pilgrim and Ilona Sagar spent three years working with creative community organisations and providers and users of social care users in the London borough of Barking and Dagenham to come up with four brave and powerful films 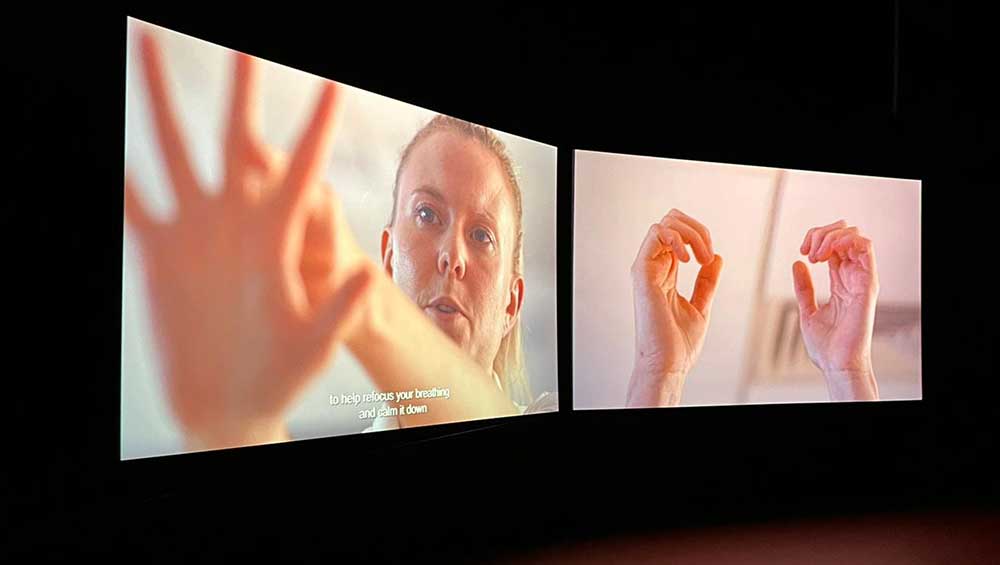 These are strange days, when caring for, and listening to, each other are seen as acts so radical that they are fit to be turned into an art exhibition. That is essentially what Radio Ballads, a curatorial co-production between the Serpentine Gallery’s civic programme and the east London borough of Barking and Dagenham’s (LBBD) culture and social care departments, is offering. The show asks us to bear witness to the experience of the marginalised, overlooked, ignored or abused, and those who care for them, within this borough, in which, according to David Harley, local head of regeneration, 48% of children live in “absolute poverty”.

The selected artists interpreting and implementing the art of caring and listening for the show are Rory Pilgrim, Sonia Boyce, Helen Cammock and Ilona Sagar, all of whom have close familial or personal histories with this part of the city. 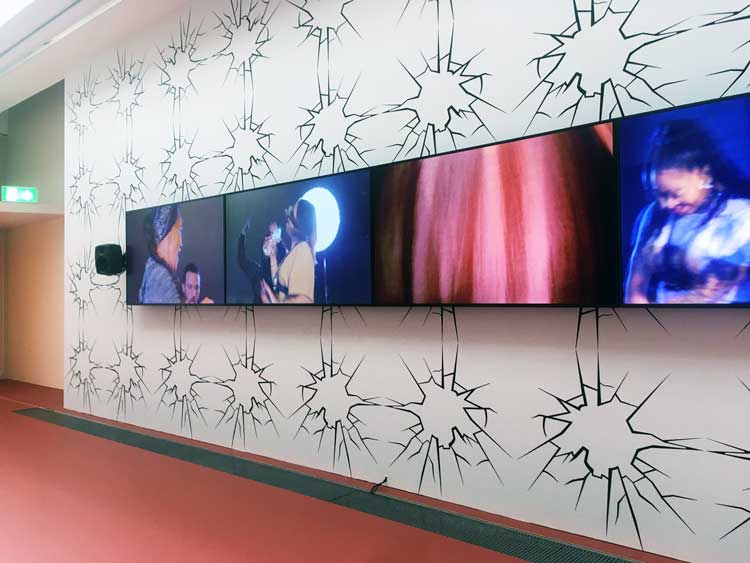 Boyce, soon to be occupying the ultimate artist spotlight as UK representative at the Venice Art Biennale, has recorded the candid, tender, brutal, disturbing, but also occasionally uplifting, accounts of women who have experienced (and escaped from) domestic violence, for Yes, I Hear You (2021). Incidents of this crime are shockingly high in LBBD, with further spikes over the last two years. For her short film, Boyce has layered these intimate sound recordings over a four-screen presentation of four actors, drawn from the wider support community, who perform what appears to be a strange but moving spontaneous dance, solo and together. 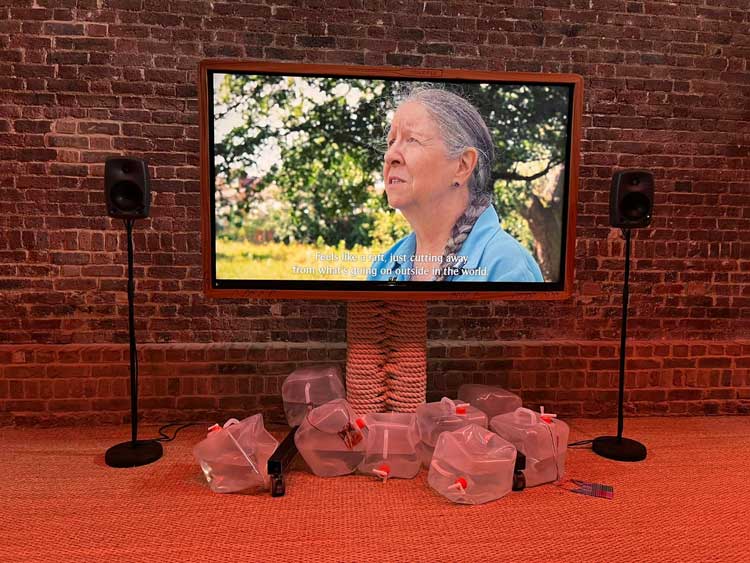 For the film Rafts (2021), Pilgrim went for a deep immersion into the community of mental health service users whose talents and resilience have flourished thanks to the local organisation Green Shoes Arts. Drawing on the “rafts” analogy, Pilgrim’s interviewees explore their own mental states, challenges and comforts, revealing what keeps them afloat in times of crisis. These musings make up eight chapters in the film, interspersed with the individuals’ own creative responses, including gardening, photography, illustration, animations, poetry, dance (contributed by Barking and Dagenham Youth Dance), and musical interludes composed by Pilgrim. The ebb and flow of confessions and creations, art forms and atmospheres are bound into a captivating hour-long work that Pilgrim aptly calls an oratorio. The creative work is good, closely observed, lovingly executed and highly personal. As for the music, it creates a warm and deeply affecting soundscape, sometimes rippling beneath the prose, keeping the mood afloat, and occasionally soaring into heart-stopping anthems, the rhythms of which pulse through mind and heart for hours after. 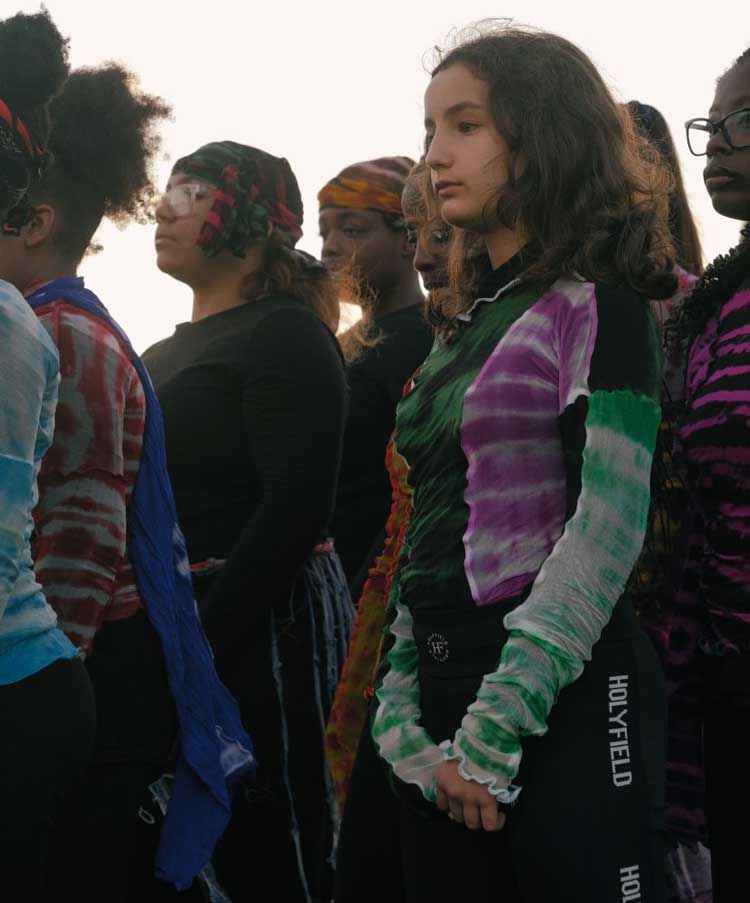 Sagar’s work The Body Blow (2022) homes in on a health crisis for which Barking and Dagenham has the dubious honour of being a UK leader – mesothelioma and other asbestos-related cancers. The borough’s pole position is thanks to the role that 20th-century industry has played in its past; much of its newly developed and developing neighbourhoods are using land reclaimed from power stations and factories – one of which was the Cape asbestos factory, whose workers recall playing badminton after hours in a room filled with asbestos dust. But asbestos was everywhere: the period in which most of the borough’s worker housing and factory construction happened, from the 1920s to the 70s, was peak asbestos-era.

Sagar’s film has a hypnotic calm, which makes the forensic detail into which she dives all the more impactful, examining individuals’ escalating diseases and worsening prognoses over time as shown on X-rays and scans. The shameful time-wasting and denials of the insurance companies that should be paying out compensation is related over a slot-machine-style scrolling of numbers that hurtle up and down. The two-screen presentation plays out these dramas along with vintage photography of smoke-filled factories, followed by contemporary shots of decaying goods yards, rusting factory doors, spaces filled with floating dust motes, each visual finely tuned to the specific interviews with calm, long-suffering patients, carers, volunteers, lawyers and health workers. 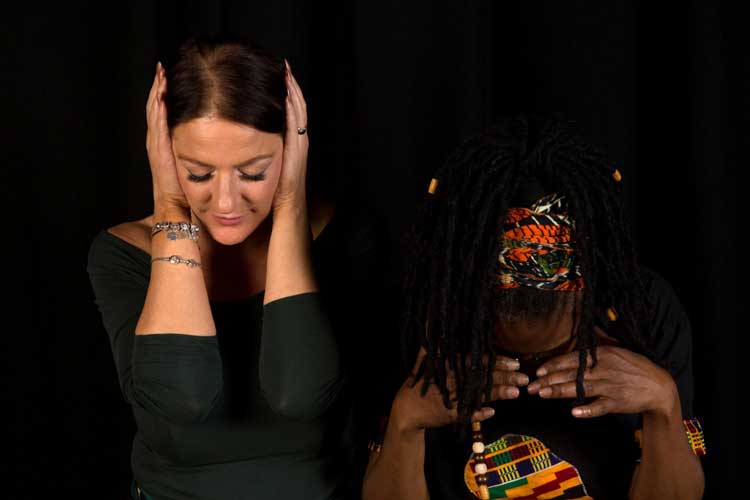 For the film Bass Notes and Flat Lines: The Voice as a Site of Resistance and The Body as a Site of Resilience (2022), the 2019 Turner prize-winner Helen Cammock – a former social worker – takes a group of the borough’s social workers in hand and gently coaxes them through a programme of music and movement, exploring their vocal talents (literally, giving them “a voice”). After years of this encouragement, they have formed a choir, which was scheduled to deliver its first major public performance at Radio Ballads’ opening night.

All this delving into the real lives of carers and those they care for has been made possible thanks to LBBD placing culture within its social care programme – a most unusual move – as part of its New Town Culture programme. So committed is it to having culture at its core, and to its partnership with the Serpentine, that it has given Serpentine civic curator Amal Khalaf her own desk in the department.

Radio Ballads was conceived by Khalaf in response to a BBC radio series she came across that was broadcast from 1957-64. A groundbreaking documentary series of eight hour-long programmes by the musicians Ewan MacColl and Peggy Seeger, directed by Charles Parker, each one featured verbatim accounts of a (then) little-seen community, including coal miners and remote herring fishermen, whose stories were transformed into song by MacColl.

Khalaf says: “Revisiting Radio Ballads in a visual art context is so interesting. When I started to work with LBBD, they were doing a bid for London borough of Culture. They approached me to consult on their bid. I pitched to do a Radio Ballad. And we did a proto Radio Ballad in 2017. And then, with that test, I just decided this could be a really good framework to take to a bigger scale and with more investment and think about what’s possible with this format … They didn’t get Borough of Culture funding but got a Culture Impact Award. We got embedded within this culture department that’s embedded within social care. We chose our four artists - we were already working with some of them - and began the process in 2018, launching officially in 2019. We are asking: how do we tell stories of people who are caring for this country after a decade of austerity?”

All of this work is to be applauded, in its rigour and commitment to long-term, frontline social practice, despite the pandemic making participation so much more complicated. Listening to the artists, curators and LBBD staff talk at the exhibition launch, it seems that the team spirit was almost enhanced by multiple lockdowns – with phone calls, online meetings and WhatsApp groups in many cases forming a welcome outlet and even antidote to the isolation and weirdness of the times; a feeling of being part of something bigger. 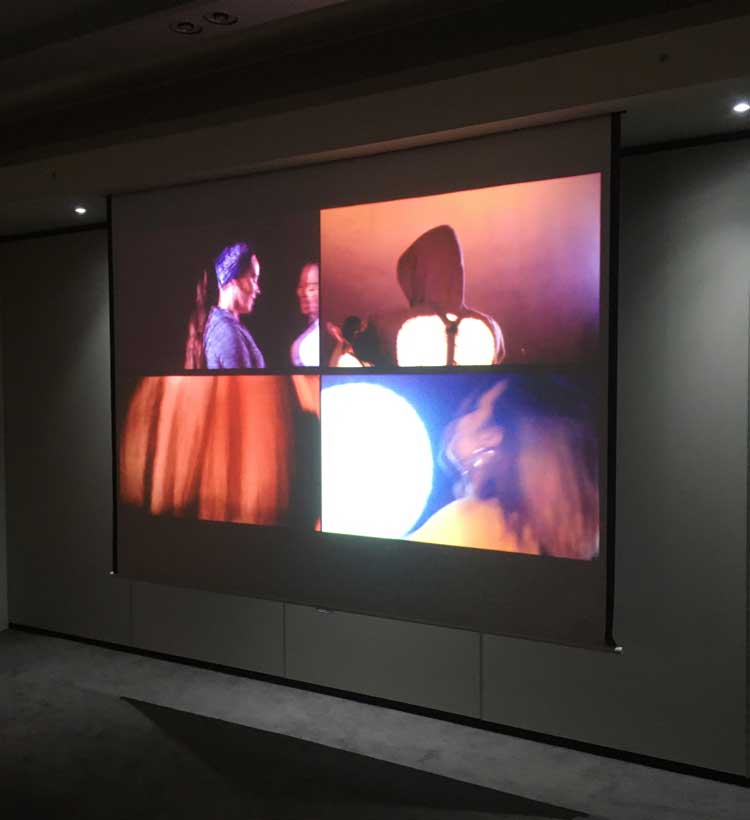 The four films are currently being screened in separate rooms at Serpentine North, along with objects, drawings and even bespoke wallpaper (from Boyce) and a book (from Cammock). For a shorter, two-week, period, the films will also be on show at Barking town hall, in the same meeting rooms that are reopening for face-to-face public engagement as the show starts. Sagar’s film will screen beyond Barking’s allotted two weeks, to coincide with the unveiling of a memorial, in the new town square, to those whose lives have been lost to asbestosis.

Sagar’s father worked in Barking for a decade or more, says Khalaf. “She is an artist who understands what it means to be from a super-industrial borough that has such a strong history, until now, of industry imprinted on people’s bodies. She was really inspired by the Radio Ballad called the Body Blow, about people living with polio … We met a group from the London Asbestos Support Awareness Group, who are terminally ill, affected by asbestosis. And they’re trying to raise awareness on the ongoing effects of asbestos on people’s lives. Like many of us, I thought it was something of the 80s, and it was gone now. But asbestos stays in your body for decades. There were people who used to hug their dad after his factory shift and now they have mesothelioma. They are trying to campaign [for] more awareness. Her film is talking about whose bodies are allowed to be at risk. Who sees this, who feels this, what’s the human cost?” 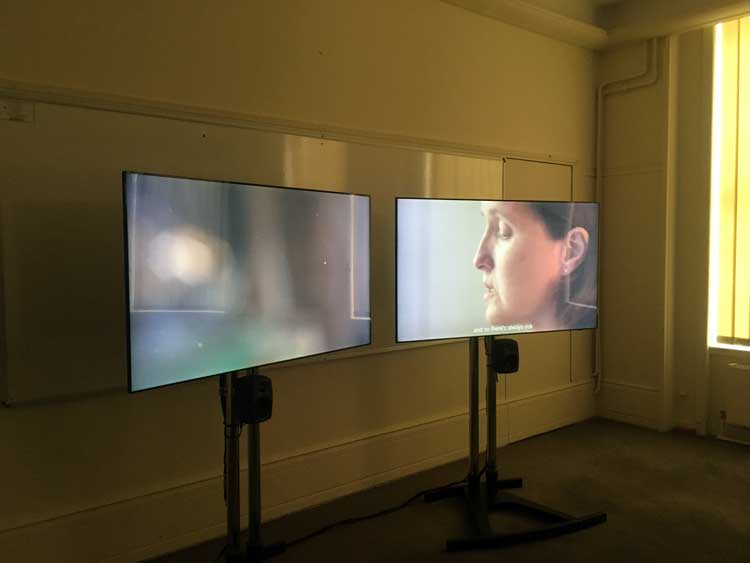 Sagar’s and Pilgrim’s films are the strongest synthesis, to my mind, of testimony, narrative, mood and aesthetics. But Khalaf sees the show as being far more than just four individual artworks. “The exhibition is a coming together, a crystallising moment of many years of work and many processes that can’t be presented. The exhibition is less a group exhibition but more a presentation of four worlds, and five worlds really because the meta world that we’re presenting is our collaboration at the Serpentine with a local council, and a council that, in its way, is quite radical and experimental and really quite open to thinking about how creativity can be part of the delivery of local authority services.”

After seeing the films once at the Serpentine and again in Barking, I find myself wondering what it is that is so affecting and profound that these works share. And I realise it’s because they speak of connection, of a slow and sincere investment in time and energy that is at odds with the usual fragmented, distracted, driven quality of modern lives and even more so of modern visual entertainments. They speak of patiently accessing other people’s inner landscapes, coaxing out the treasures held within, and creating a space for them out of a spirit of honesty, clarity and complete trust. Khalaf talks of the projects and process “moving at the speed of trust”. And they all vibrate with the expansive frequency of sharing in a safe space where people are met with compassion and also a shared ambition: it’s not just the sharing that stands out, it’s the quality of the work that is conjured individually and collectively. Each film’s topic may be challenging, but the spirit in which these messages or narratives are delivered feels rich with human possibility, it feels like nourishment. (One can only hope that the local elections in May keep the current teams in power to continue to implement these radical and creative approaches to caring.)

Serendipitously, while writing this, I came across a quote that nails the essence of what makes all four works sing, from the Irish philosopher and poet John O’Donohue, who has written so eloquently on the meaning and essence of beauty.1 Interviewed for the podcast On Being, he was asked by his host, Krista Tippett: “What comes to mind when you think of beauty?” He answered: “I think of those unknown people who hold out on … frontiers of awful want in awful situations and manage somehow to go beyond the given impoverishment, and offer gifts of possibility and imagination and seeing.” 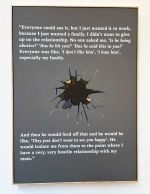 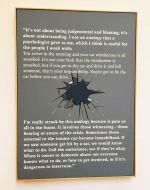