Rachel Kneebone – interview: ‘My work is concerned with our visceral life, with movement and the experience of inhabiting the body’

Rachel Kneebone – interview: ‘My work is concerned with our visceral life, with movement and the experience of inhabiting the body’ 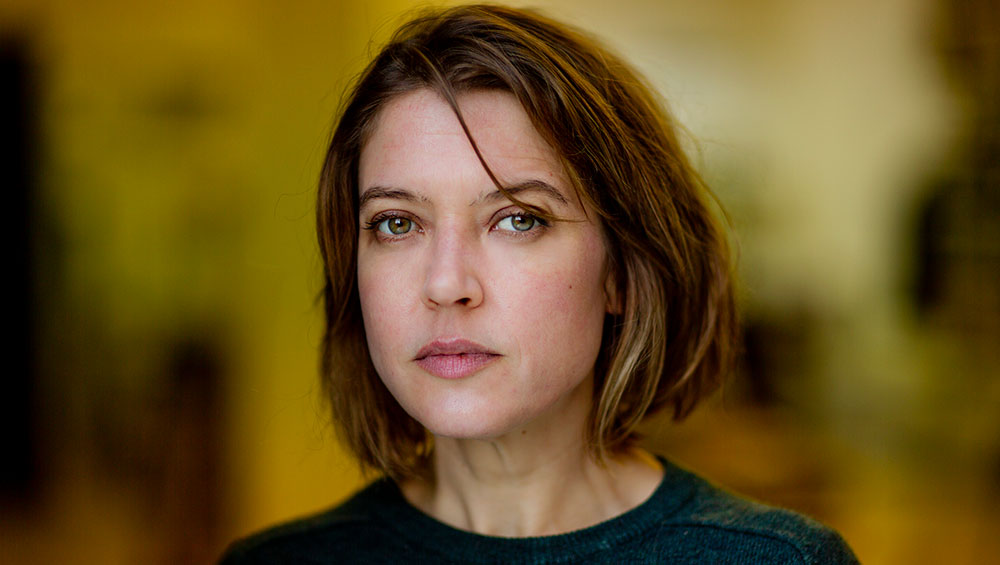 Take almost any sculpture by the aptly named Rachel Kneebone (b1973) and you might see groups of bone-white figures writhing in a chaotic tangle. But on closer inspection you will find that you are only partly right. The bodies in Kneebone’s works are half-formed. Legs are joined to truncated torsos that taper to third limbs, or exist on their own without bodily support.

There must be thousands of disembodied legs in Kneebone’s five-metre-tall sculpture 399 Days, which was named for the time it took to make. Its cylindrical form was inspired by Trajan’s Column in Rome and from April 2017 to December 2019 stood near a plaster cast of its Roman antecessor in the V&A. The piece balances on a stepped base and is compiled of 63 panels arranged around a central support. Its top is crowned by 13 squat pedestals that sport more amorphous forms. 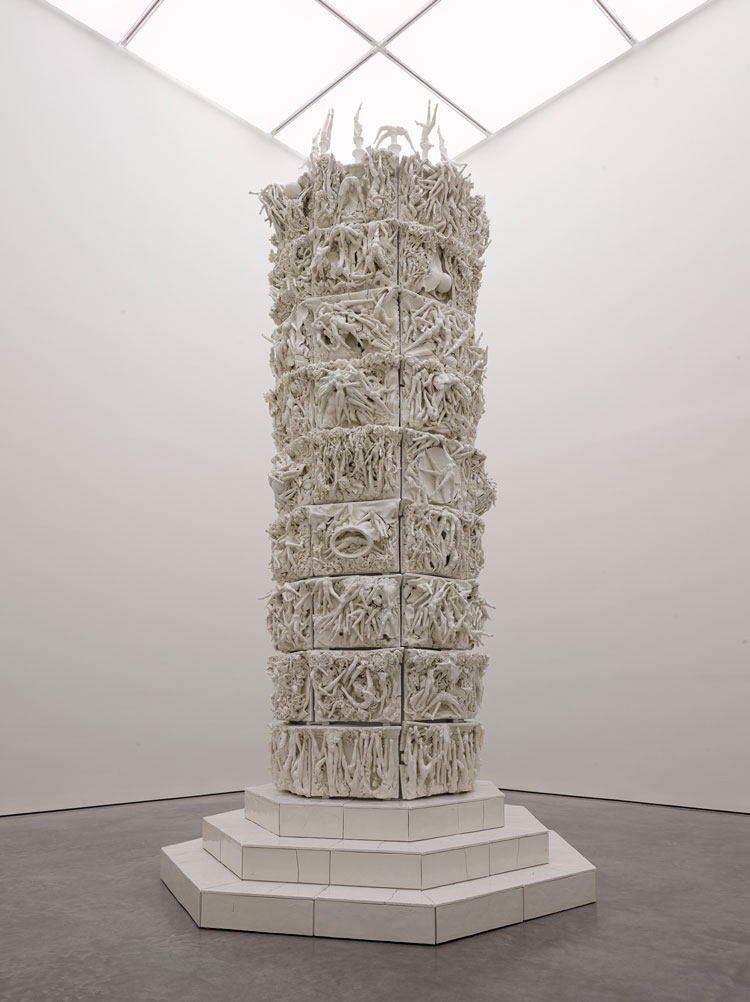 There are plenty of classical allusions in Kneebone’s works. The uncoloured porcelain resembles the time-polished statues of ancient Greece, echoing the drama of works such as the Laocoön, that Hellenistic monument to struggle and pathos. But Kneebone’s sculptures resist narrative. They are truly contemporary creations, and although we might see in them any number of Renaissance and baroque masterpieces (Michelangelo’s The Last Judgement and Théodore Géricault’s The Raft of Medusa come to mind), Kneebone leaves it to the viewer to interpret her work.

Aside from the ossified limbs, Kneebone’s sculptures also contain twisted vines, flowers, ribbons and allusions to genitalia. There is a plasticine delicacy to everything she makes, a subtleness that belies the brittleness of her chosen material. All her sculptures can, in fact, been seen as contradictions. They seem to encapsulate life and death, pain and ecstasy, motion and rigidity all at once. They are, in a way, perfect metaphors for life’s many paradoxes. 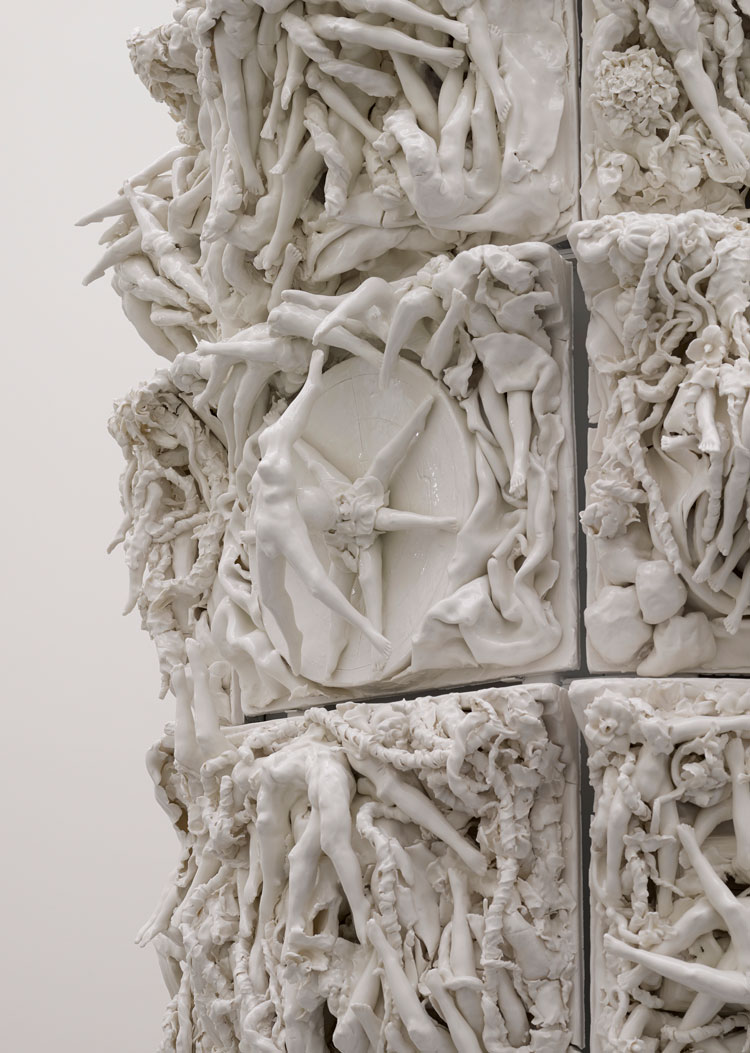 On 10 July, 399 Days will go on display at the chapel in Yorkshire Sculpture Park, alongside new sculptures specifically designed for that space. Studio International spoke to Kneebone about her work and the inspiration behind her latest pieces.

Emily Spicer: How and why did legs become the primary focus of your sculpture?

Rachel Kneebone: My work is concerned with our visceral life, with movement and the experience of inhabiting the body. Although legs feature a lot, they are not really the primary focus. The leg indexes the classical body, and especially its movement. It is a recognisable signifier and, as an identifiable form, acts as a way in, or a starting point, when looking at a sculpture before creating meaning.

My recent work does not contain many legs. It feels to me more as though I am working inside the leg. It is less an external objectification of the body via movement than an effort to get inside movement itself. It is more subjective, how it feels to move rather than the act of movement. 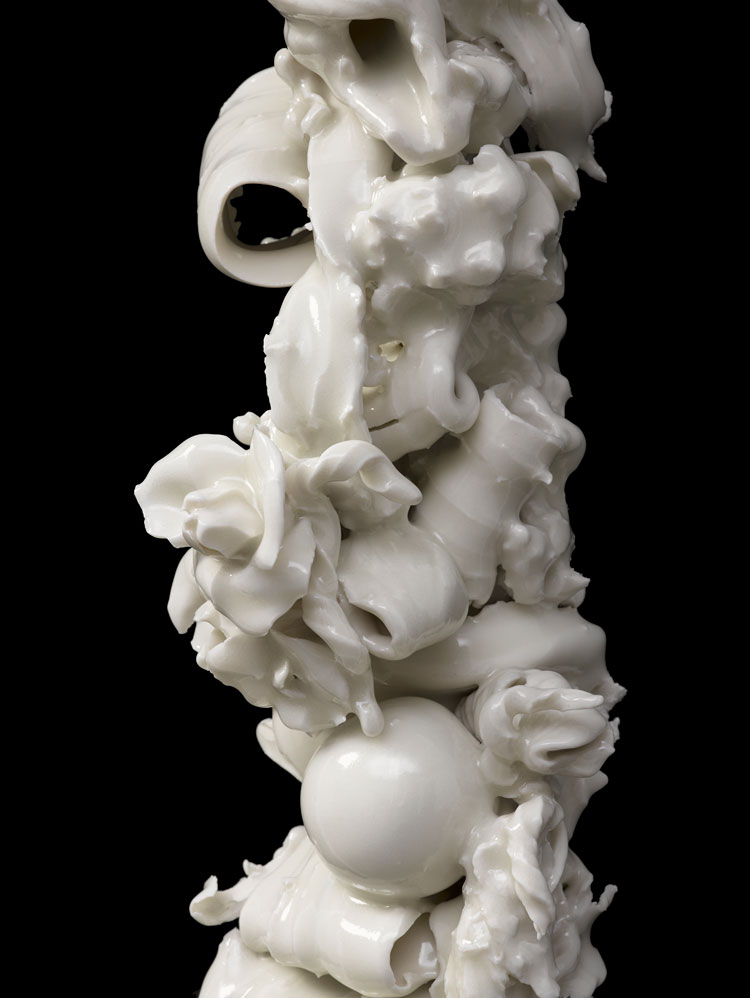 ES: There is often a ball in your compositions. What is its significance?

RK: In general, the smooth spherical form of the ball operates as a counterpoint to the chaotic pace and asymmetries of other areas within the work. It embodies classical geometric form against the abstract, splintered and fragmented forms within the works, and its meanings are many and varied: the world, the egg, movement, the eye, the moon, a bubble, even the fragility of life. But it is always relational, working to offset other elements in the sculpture.

ES: You leave your sculptures uncoloured. Does the white of the porcelain have a particular meaning in your work?

RK: I chose to work with porcelain due to its whiteness. The whiteness of the work, the blankness of it, creates a surface for meaning to be projected on to. It is ambiguous, allowing whoever is looking at the work to find their own meaning. But I don’t see whiteness as an absence, rather as a kind of fullness, inviting many different interpretations because whiteness does not fix meaning in the same way colour does. 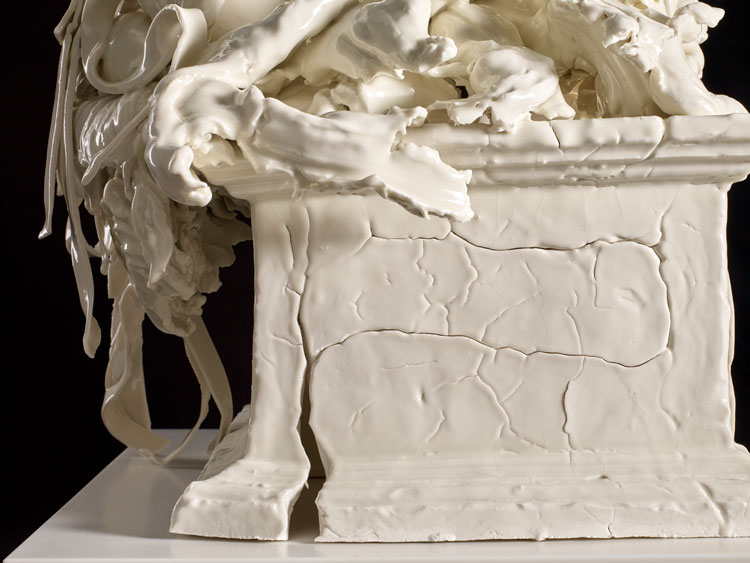 ES: Your sculptures often reference the feminine, with females figures and folds of porcelain that resemble labia. Does your work comment on the female experience?

RK: My work is concerned with being human, being alive in the world and inhabiting the body. It would be impossible not to comment on female experience. But everyone, whatever their gender, struggles to inhabit their body, and I hope that my work speaks to that part of our experience.

ES: Your monumental piece, 399 Days, will be accompanied by a selection of your drawings in Yorkshire Sculpture Park’s chapel. Could you tell me about your drawing practice and how it relates to your sculpture?

RK: My drawing and sculptures are distinct and separate to me, although there is an overlap in intent – to capture movement and make permanent and still that which is fleeting and in a constant state of flux. There is also a relationship between how I make a drawing and a sculpture, rotating the paper and porcelain, continually appraising and making decisions as part of the process of making. Neither my sculptures or drawings are executions of pre-existing ideas, they come from the act of making. I never work from drawings or follow pre-existing designs. 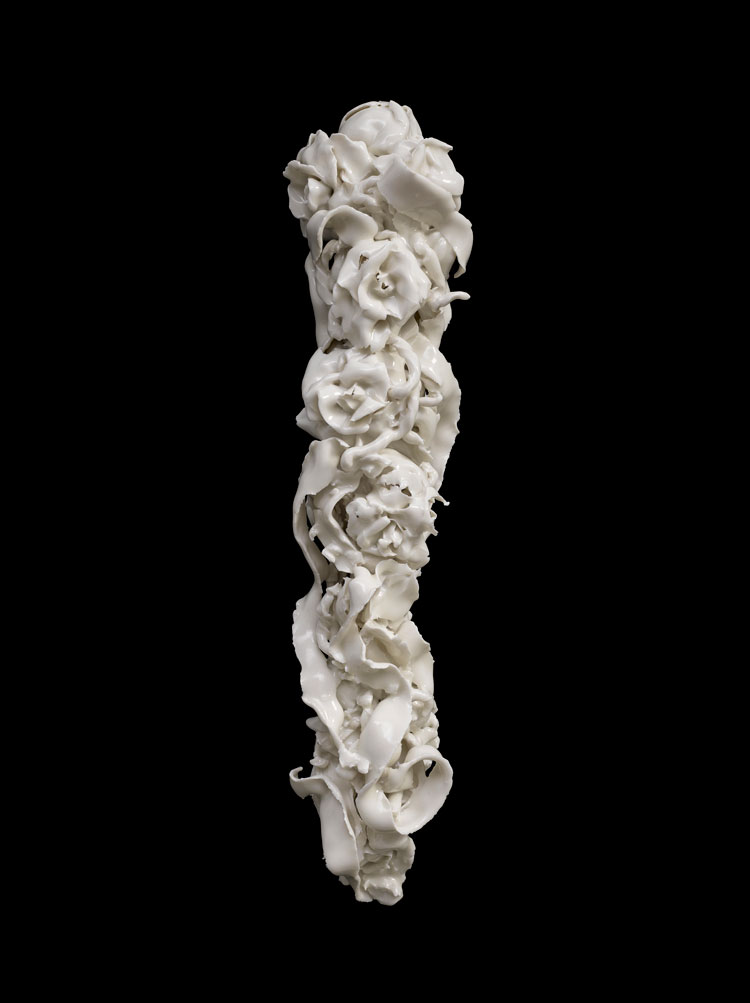 To me, making is a response to the material within the time it is being made. It is not about things being right or wrong in terms of adhering to decisions made at another time, as time is constantly changing during the making.

ES: Your drawings are titled Ovid in Exile and you have made porcelain works on this theme. What is it about the poet’s expulsion from Rome that inspired you and how have you interpreted this story?

RK: The Ovid in Exile drawings were first shown in Hong Kong in 2017, alongside a series of sculptures: Salmacis, Daphne, Narcissus, Pool. They were inspired by Ovid’s themes of metamorphosis and transformation, which resonate directly with my work in its focus on regeneration, renewal, growth and the cycle of life. He was writing about exile, but also about many other forms of change and dislocation, including social change and much more intimate and bodily changes. 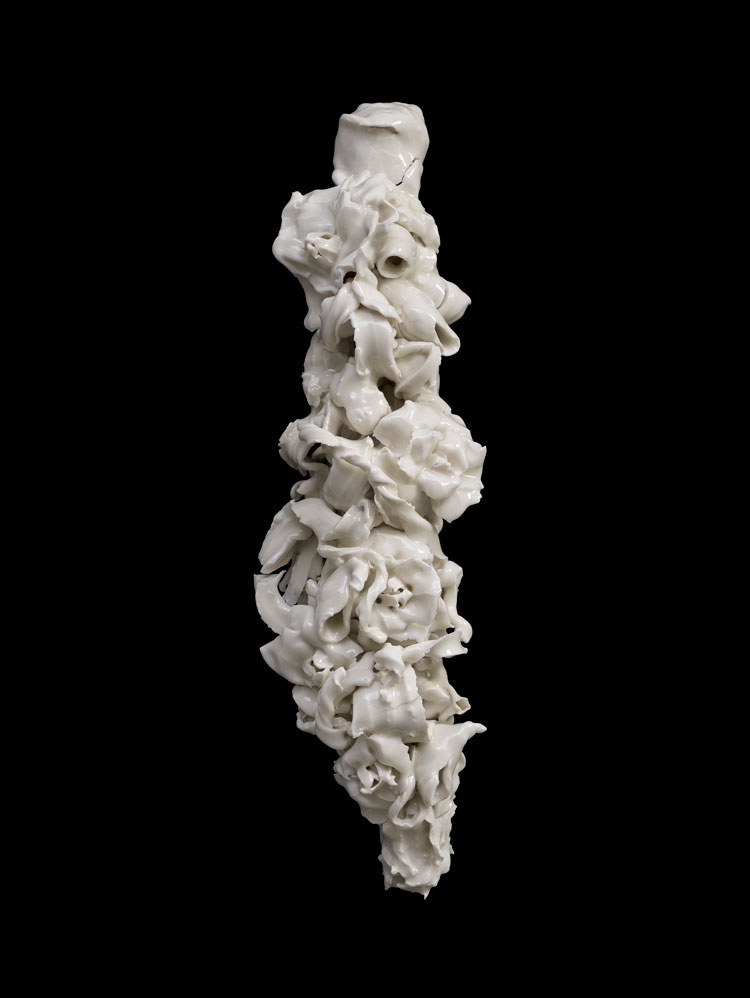 ES: Could you tell me about the new sculptures you have made for Yorkshire Sculpture Park?

RK: I have made a series of wall pieces, three of which will be exhibited in the Chapel: Pulse II, Eddy I and Whorl I. The movement in these works is less organic and plant-like than in previous works and more watery, closer to the movement of and within liquid. I was drawn to these forms by the architecture of the Chapel, and I hope they will create a kind of vital counterpoint. It has been very inspiring for me to think about the different forms of movement in solids and liquids and to explore this.

ES: Do you have any future projects lined up?

RK: I have an exhibition, Raft, at White Cube Mason’s Yard in July and then Punoutua at the Serlachius Museum Gösta, in Mänttä, Finland, in 2022.

Punoutua is at the Serlachius Museum Gösta, in Mänttä, Finland, from 14 May to 9 October 2022. 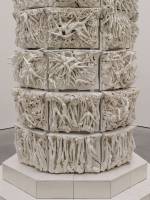