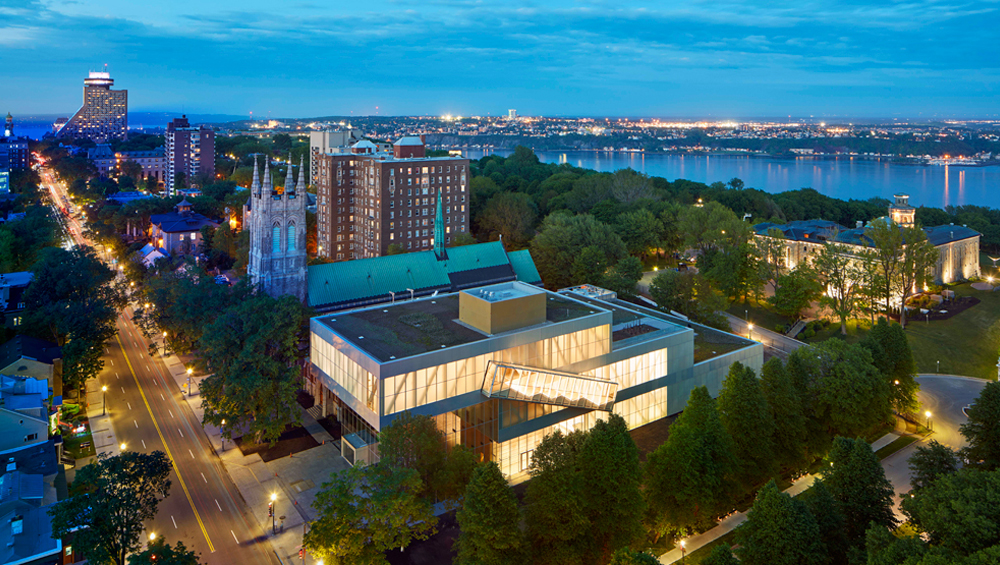 A glorious new building, the Pierre Lassonde Pavilion, has been added to the campus of the Musée National des Beaux-Arts du Québec (MNBAQ), situated in the 265-acre Parc des Champs-de-Bataille (National Battlefields Park) on the historic Plains of Abraham in Québec City, where the British defeated the French in 1759. Named after the chairman of the museum’s board, the building opened to the public on 24 June. Shohei Shigematsu, partner at Office for Metropolitan Architecture – who has headed OMA’s New York office since 2006 – oversaw the project, its first in Canada, working with Montréal-based architecture and design firm Provencher Roy. Charged with expanding MNBAQ’s existing space, the new 14,900-sq-metre structure nearly doubles the complex’s exhibition capabilities, adding six galleries to display its post-1960 collections, three permanent galleries for Inuit art, contemporary art, and decorative arts and design, and two galleries for temporary shows. Pride in the regional and local has been on the rise of late, but it has always been MNBAQ’s mission – while also engaging with global art.

The integration of the complex was vital to the plan, connecting the new pavilion with the existing Beaux-arts edifice, the converted 19th-century prison and the presbytery and church adjacent to it. Designated to serve as the principal entrance, it weaves “together the museum, the city and the park, physically, aesthetically and psychologically,” says Shigematsu. Its inviting, light-filled volumes differ greatly from the earlier structures and consist of three stacked glass boxes, each successively larger than the one below. The top one slides forward to extend over the facade; stepped in the rear, there they form a series of outdoor terraces. The pavilion is braced by an elegant steel truss system that frees the interior spaces from the disruption of additional supports, providing the openness and ambitious scale required by contemporary art. The OMA team, to its credit, kept in mind (something it has not always done) that the purpose of museums is to showcase art, tilting the design towards the refined and usable rather than the radical but dysfunctional. Shigematsu says the pavilion might look somewhat bland from the outside (it doesn’t, but neither does it look rebellious), but OMA wanted to steer away from iconic constructions toward something “more modest, more neutral, perhaps more democratic with the public in mind.”

Connection is a theme that characterises the project, including the interpenetration of the exterior / interior. For instance, the unusually generous overhang of the upper glass box cantilevered over the doorway welcomes the street as part of the museum, creating a public foyer before entering the soaring, clear-glassed Grand Hall. The cloister of the church, another outdoor space, is situated along the left side of the pavilion from the entrance, and similarly sheltered by an overheard projection, again making interior and outdoor space equivalent. The huge upright concrete slab in the shape of a simplified facade in the Grand Hall is a witty nod to the church’s presbytery, into which the audacious kelly-green cloakroom of the pavilion intrudes, further joining the two buildings. The accessible terraces on the upper levels that face the park are another reference to the proximity of inside and outside, the glass wall separating them nearly invisible. Uniting the new pavilion to the neoclassical beaux-arts structure is a lengthy, immaculately white, subterranean passageway. Dedicated to Jean-Paul Riopelle, one of Canada’s most prominent artists, it took a potentially pedestrian – in both senses of the word – thoroughfare and transformed it into an exhilarating experience. At Paris’s Musée du Louvre, you must see da Vinci’s Mona Lisa; here you must see Riopelle’s 40-metre triptych and masterpiece, Tribute to Rosa Luxemburg (1992), on permanent display.

Open, buoyant, interacting with the urban/pastoral environment, the tinge of environmental green in the glass is particularly apt, conjuring a kind of minimalist emerald palace during the day, and a radiantly crystal one at night when illuminated. Opposing the overall spareness, the star of the Grand Hall is a glamorous white staircase. It starts on the subterranean level and spirals gracefully upward in a slow curve to the second floor, an embodiment of flow that takes the edge off all the building’s right angles. Its luminous aluminium treads seem to beckon visitors forward, beaming them up. Shifting strategy, the staircase to the top level is enclosed in a rectilinear channel of clear glass. Attached at a jaunty angle to the exterior of the side expanse, protruding out of it like a sublimely sophisticated version of a fire escape, it rewards the climber with terrific panoramic views of the park and city.

Some notable details are the three layers of glass used in the exterior walls that are not transparent and include two layers of frit to control heat and cold. Additionally, the deflected light and the pattern etched on to them subtly echoes the X-configuration of the trusses. For warmth, the honeyed glow of wood that panels the restrooms in their entirety is a nice change from the generally cool materials, although the landscaping of the terraces also contributes colour and warmth, depending on the seasonal plantings. And, of course, so do the artworks. One indication of the pavilion’s success may be that it helped OMA land another substantial (and similar) project: the Albright-Knox Art Gallery in Buffalo, New York, its first museum commission in the United States. 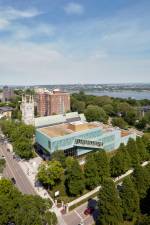 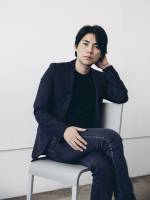