From the Forest to the Sea: Emily Carr in British Columbia

From the Forest to the Sea: Emily Carr in British Columbia

Canadian artist Emily Carr, born near the end of the 19th century, recorded the relics and landscapes of the indigenous people of British Columbia. Through her work, this exhibition at Dulwich Picture Gallery provides a vividly illustrated history lesson

Emily Carr is one of the best-loved artists in Canada. But she is little known beyond the shores of that great country. The first major solo exhibition in Europe, now at the Dulwich Picture Gallery, will give visitors surprising insights into the painter’s journey from obscurity into the light of day. The exhibition is a natural step for the gallery after the resounding success of its Tom Thomson and Group of Seven exhibition in 2011-12. Yet it marks a departure from the 1920s school’s modernist paintings of the Canadian Shield wilderness, and charts the indigenous presence in British Columbia.

The exhibition is co-organised by the Art Gallery of Ontario and curated by the director of the Dulwich Picture Gallery, Ian Dejardin, and Canadian art critic and writer Sarah Milroy. Vistas of the Northwest Coast and its seasonal cycles frame this show, as the galleries range in colour from green to blue. Winter falls as shady rainforest canopies appear in the first room and summer appears to dawn in the light blue seas of the last. Ritual objects from ethnographic collections of the British Museum and the University of Oxford’s Pitt Rivers Museum are focal points of interest, symbols of the indigenous people’s ability to live off the land.

Milroy said: “We agreed on this idea of rooting the exhibition in the sense of the experienced landscape, so that it would start in the dark forest, with the ritual and feasting objects, and end with these rapturous blue skies and sweeping oceanscapes at the end of her career with these objects that are associated with fishing. We wanted it to feel as if you had come to British Columbia through her eyes and also through these objects.”

Carr was born in 1871, the youngest of five daughters, to British parents. The family lived in a lovely Victorian house on Vancouver Island and had a conservative upbringing in a classic colonial situation. After her parents died young, Carr began to forge her artistic career by spending three years training in San Francisco. Just before the turn of the 20th-century, she arrived in Europe, a rubric for excellence at that time. Although the artist disliked the city environment of London, she travelled to St Ives, Cornwall, and acquired a solid training in traditional English watercolour.

By 1904, Carr was back in Canada. After teaching for while, in 1907 she decided to take a trip to Alaska. On the journey with her sister, she encountered Northwest Coast Aboriginal monumental carving. This trip marked a turning point in her oeuvre: Carr made up her mind to record the relics of the First Nations people, which at that time were believed to be a dying culture, after epidemics had swept across their villages during the 1860s. On an iPad in the gallery, you can leaf through vignettes from her trip in the recently rediscovered journal Sister and I in Alaska.

Yet the itinerant artist sought a modern language of painting, so spent a final era of training in Paris, the avant-garde of the art world at the time. There she mastered a bright and bold technique, while studying under the influence of post-impressionism, which enabled her to bring to life the spirituality of the indigenous canoe people. The advances of her technique are illustrated in a pair of paintings of war canoes. A 1908 watercolour is pale and delicate, whereas a 1912 oil painting is illuminated with layers of brilliant Fauvist colour: it is called Indian War Canoe (Alert Bay).

Shortly afterwards, she painted her early masterpiece, Tanoo, Queen Charlotte Island, BC, 1913, in which the totem pole stands tall in the deserted village of Tanoo, where much of the population was wiped out by epidemics. Although Carr was one of the most advanced artists in Canada in 1913, she could not sell a single work. So her paintings languished for more than a decade in the lodging house that she opened to provide a new stream of revenue in 1913. Unfortunately, the enterprise faltered as the first world war broke out and rents plummeted.

That could have been the end of her story. But instead it was just the beginning. In 1927, the director of the National Gallery of Canada in Ottawa learned of Carr’s existence and selected her to be the principal exhibitor of a major show about the art of British Columbia. In Ottawa, she encountered the Group of Seven, whose member Lawren Harris, said: “You are one of us.” Their collaboration opened a new chapter for Carr: she began to paint dramatic landscapes such as Indian Church (1929), with trees towering like totem poles at Friendly Cove, where Captain Cook landed in 1778.

This friendship encouraged Carr to discover her own spirituality in the forest and the sea, reflecting the belief system of “theosophy” – the idea of searching for the divine in the everyday. Happiness (1939) conveys a sense of joy in the anthropomorphic tree, as it reaches towards a heavenly sky. This luminous painting of the wonder of nature is one of the highlights of this show. Yet also worthy of attention are the sophisticated ritual objects and vibrant portrayals of the culture of the First Nations people, which Carr would record in her acclaimed book Klee Wyck (Laughing One) in 1941.

The exhibition not only shows that Carr was a great artist, but reveals her progressive approach to studying the indigenous people, which provides a vividly illustrated history lesson. Milroy hopes that visitors will understand that when the Europeans arrived in the late 1700s in British Columbia, they were arriving not on a wilderness, but in a place where culture had been practised with great success for millennia. She says: “I think one of the things about Canadian history is that there is a period of collaboration where indigenous people all across the country assisted the Europeans in finding their way in these new territories where they had no comprehension of how to survive or where the rivers flowed, or how to capture these different kinds of animals. They traded together, so there was a way in which the aboriginal people of Canada extended hospitality to the Europeans when they first arrived. What I see here is a British institution offering hospitality in return for the dignity of their culture.” 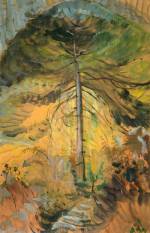 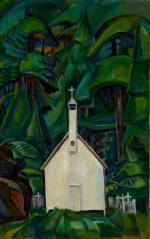