Artist Richard Learoyd recently described contemporary photography as a “regressive medium” whose technological innovation, ironically, has led it “back to a sort of Kodak infancy”.1

This is evident not only in fine art photography, but also in the everyday use of the medium: Facebook’s Instagram software, for instance, mimics the aesthetics – the shape, colour and the vignetting effects – of prints from early Polaroid and Kodak Instamatic cameras. But the regression to which Learoyd refers is not only the intervention of the past into the current development of photography; it is a simultaneous psychological regression, as far-reaching as the popular appetite for taking and sharing photos, in which we yearn for the ‘Kodak moment’ – for a vision of the past with which to frame our present. Two photographic exhibitions currently on show in London deal with the relationship between this psychological or sentimental and this aesthetic, medium-specific regression in distinct and insightful ways.

The National Gallery’s Seduced by Art: Photography Past and Present is a sprawling, ambitious attempt to explore the long-standing and complex interplay between the history of art (though mainly old master painting), the development of the medium of photography and the influence of both of these on contemporary photographic practice. By contrast, Shoot! Existential Photography at The Photographers’ Gallery focuses on a specific phenomenon in the history of the medium: the photographic shooting gallery, common at fairgrounds since the 1920s, in which the player fires a pellet at a target, an act which, if successful, triggers a camera shutter capturing him or her in the moment of victory.

By virtue of its huge scope, Seduced struggles throughout to appear more than simply a haphazard array of comparisons between works from the Gallery’s own collection and photographs with which it deems them to have a formal relationship. This haphazardness is partly due to a lack of clarity as to how many of these connections are “real” and how many are the result of curatorial interpretation. When this is declared, the exhibition excels: the first room, showing a version of Eugene Delacroix’s The Death of Sardanapalus (1827) alongside Jeff Wall’s The Destroyed Room (1978/1987) and Tom Hunter’s Death of Coltelli (2009), both of which explicitly reference the original painting, is an auspicious start, in which deliberate engagement on the part of Wall and Hunter is evident. Furthermore, these two photographs mark a powerful beginning to the show, with their strong colours, stunning monumentality and their stylised stillness that uses the tropes of painting to subvert photography’s claim for ultimate truth.

Similarly, in the space devoted to portraiture, the co-presentation of Martin Parr’s double portrait Signs of the Times, England (1991) and Thomas Gainsborough’s Mr and Mrs Andrews (c. 1750), is framed by the curatorial narrative not as an attempt to draw a clear line of influence between the two, but to examine how early painterly and photographic conventions are mirrored in present-day portrait photography. The Andrews look relatively at ease when compared to Parr’s sitters who, expecting the instantaneity of the shutter, have been held posing for longer than they ought, resulting in a jarring awkwardness that is difficult to bear for both viewer and viewed. By drawing out the moment of “capture” in this way, Parr references not only the lengthy periods of time for which sitters would pose for paintings prior to photography’s invention, but also the more briefly held yet certainly more revealing postures and expressions that were the result of the long exposures required by early cameras.

Yet in the space exploring photography’s engagement with the neo-classical nude, confusion lies in the pairing of Richard Learoyd’s Man with Octopus Tattoo II (2011) and James Andersons’s photograph of the classical Greek sculpture The Laocoön Group, prints of which went on sale to museum visitors shortly after it was first taken in 1855-56. Though this pairing makes an intelligent if well-trodden point about the ongoing use of photography as a tool for the mass dissemination of great works of art, the comparison of these two photographs appears to be based on little more than formal similarity. Learoyd’s photograph is described in the catalogue as unusually “volumetric”2 and therefore sculptural, and the marble of the Laocoön is supposedly mimicked in the “cold paleness of the evenly lit skin” of Learoyd’s sitter.3 As well as failing to distinguish between the artist’s deliberate observation and incorporation of these effects and the interpretive bias imposed on his work in service of a broader curatorial thesis, this comparison fails truly to engage with the exact nature of influence. If the intention is to compare Learoyd’s octopus-bound form with the mythical sea snake’s imprisonment of the Laocoön figures from a symbolic or psychological point of view, then this has barely been touched upon. Yet nor has the alternative, namely the conceptual and aesthetic implications of re-photographing a sculptural object, whether marble or flesh: Learoyd’s photograph, with figure faceless and with crossed arms, inevitably adds a level of stylisation to his subject that Anderson’s deadpan presentation of the Laocoön does not exhibit.

In systematically tackling each of the major genres of the history of art, one per gallery space, Seduced frequently struggles to maintain its focus, the one exception being the still life section. Rather than simply pairing one work with another as in previous rooms, here we see the development of an internal sub-thesis which draws together all of the works in the space through a convincing assessment of the theme of the vanitas in Dutch painting in relation to its contemporary counterpart in photography and video. Jan van Huysum’s Hollyhocks and Other Flowers in a Vase (1702-20) speaks both to Sarah Jones’s large-scale, excessively detailed series of still lives of flowers entitled The Rose Garden (2007) and to Ori Gersht’s Blow Up: Untitled 5 (2007), which freeze-frames a bunch of roses mid-explosion with astonishing delicacy. Sam Taylor-Wood’s film Still Life (2001) meanwhile addresses our altered notion of what now constitutes beauty and taste in relation to the passage of time. The fruit which gently moulds on the platter in this film denies the implied longevity of that in the neighbouring Dutch paintings, and the Biro pen in the foreground suggests a new form of vanity, or at least self-delusion: that of a world reliant on plastics and their enormous capacity to endure, the perfect analogy for our perception of a never-arriving future.

Whereas Seduced necessarily jumps from theme to medium to line of influence with an impressive agility laced with unsettling rapidity, Shoot! Existential Photography is, by virtue of its concise approach and its smaller size, a significantly more astute delivery of a specific strand of the history of photography. It plays upon the fundamentally morbid nature of the photographic incident: the awareness of our eventual demise and the need to preserve ourselves prior to that eventuality. Yet where all photographs therefore bear the mark of death, the shooting gallery image - a photograph of yourself shooting yourself - forces a much closer aesthetic coupling of the moment of recording with the moment of execution.

This dual narcissistic-annihilistic compulsion is most powerfully conveyed in Erik Kessels’ In Almost Every Picture #7 (2008), an extensive series of self-portraits made annually since 1936 at a fairground shooting gallery by one Ria van Dijk. With the exception of wartime, each year of Van Dijk’s life is documented in this highly particular way; the lack of change from one image to the next, aside from physical appearance, is testament to photography’s failure to create a viable “document” of the self in any given year. Yet seen as a series, a repetitive, compulsive, pilgrimage-like effort is evoked that indicates the subject’s desire for continuity, her unwillingness to relinquish to the sands of time one of the few characteristics that link her to her 16-year-old self.4

Still more fascinating is the neighbouring “Celebrity Cabinet”, a slideshow of photographs featuring well-known 20th-century artists, writers, thinkers and even photographers attempting to hit the target. Jean-Paul Sartre appears pensive and protective as he watches Simone de Beauvoir, her eyes firmly shut, fire the gun. Brassai’s arch-browed amusement contrasts with Fellini’s equally arch-browed inquisitiveness as he presides over Rinaldo Geleng’s attempt to shoot and win. Most telling is certainly Henri Cartier-Bresson’s portrait: unsquinting, apparently clear-minded, his expression of deep concentration mimics that of the photographer as he or she times the pressing of the shutter. Cartier-Bresson’s own advocacy of the “decisive moment” – the perception of the photographic act as “the simultaneous recognition, in a fraction of a second, of the significance of an event as well as of a precise organization of forms which give that event its proper expression” – is perfectly mirrored here, and is further symbolised in the pairing of trigger-pull and shutter-release.5

Though shooting galleries are now largely a thing of the past, the ongoing contemporary fascination with this phenomenon is explored in the show, the most striking example being Christian Marclay’s film installation Crossfire (2007). As in other videos made by Marclay, this work consists of multiple excerpts from feature films spliced and stitched together to form one long sequence, in this case of gunfire. Hundreds of decisive moments are drawn out to alarming effect as the viewer, surrounded on four sides by movie screens, is literally caught in the crossfire, with the rhythm of the shots forming a deafening roar that borders on musical. Where the shooting gallery photograph spoke of our obsession with the glamour of the gun, and with ability to prove photographically our success at wielding it, Marclay finds an analogy in the Hollywood movie and its increasingly powerful special effects that allow the audience to feel emotionally and physically implicated in the action on-screen.

While Seduced offers a well-considered but relatively conventional interpretation of the history of photography, one that my own photographic education touched upon as early as A-level, Shoot! benefits from the natural allure of its subject without suffering in terms of quality. Marclay’s film offers the perfect analogy for their contrasting methods: like Marclay’s gun-bearers, Shoot!sends forth an historiographic bullet that cuts across time, space and even medium to question the underlying purpose of the photographic act through just one of its many manifestations in an evocative if sensationalised way. Meanwhile, the National Gallery’s insistence on building Seduced around the conceptually rickety armature of its own collection, thus missing out potentially highly relevant examples such as Hiroshi Sugimoto’s series of photographic “portraits” of Henry VIII and his six wives, leaves the viewer turning on the spot, assaulted from all sides, in an attempt to locate the source and significance of all of that racket.

4. The beautifully designed catalogue for this exhibition includes a flicker-book style presentation of the full series of Van Dijk’s self-portraits across the corner of each page. Not only is this an enjoyable addition to the catalogue, but it also allows Kessel’s work to be compared visually with other shooting gallery photos as they are discussed throughout the book. See Shoot! Existential Photography, The Photographers’ Gallery, London, 2012, pp. 9-119. 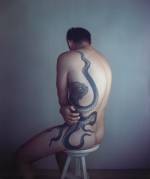 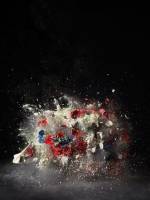 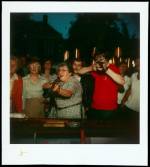