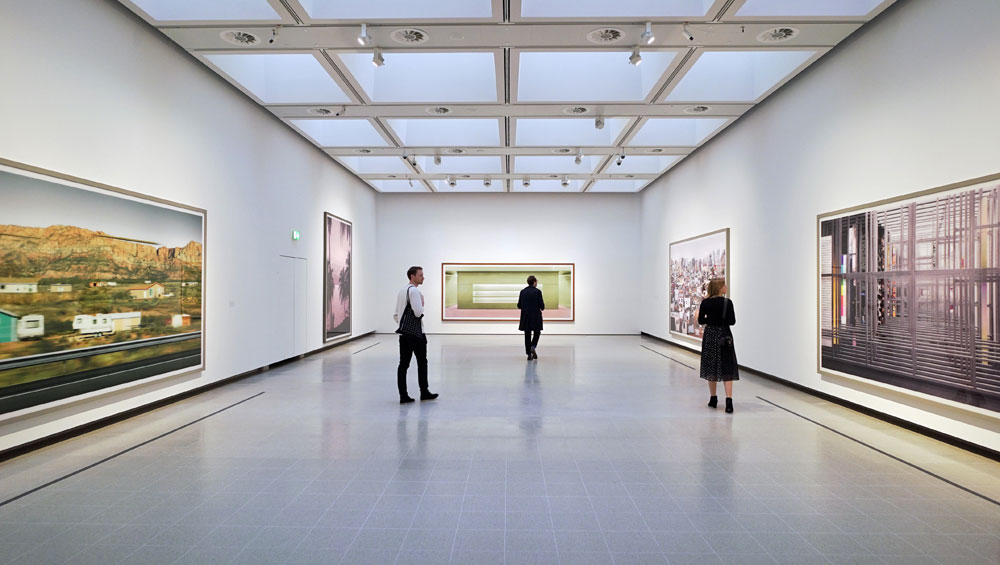 The Hayward Gallery celebrates its return from a two-year renovation with an impressive retrospective of the work of Andreas Gursky (b1955, Leipzig, East Germany), whose stunning large-scale pictures have made him one of the world’s most acclaimed and sought-after contemporary photographers. Gursky’s often vast compositions of factory floors, hotel lobbies and stock exchanges reframe western daily life in anthropological terms, redefining what we understand photography to be, and inviting us to, quite literally, step back and take in the bigger picture. 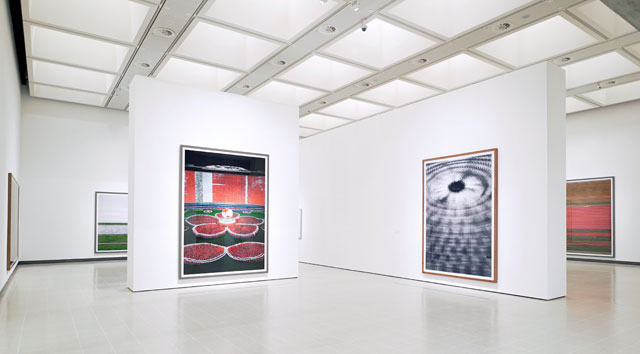 Loosely organised chronologically, we start with Gursky’s artistic beginnings in the 1980s at the renowned Kunstakademie Düsseldorf, where he studied under Bernd and Hilla Becher alongside fellow luminaries Thomas Ruff, Thomas Struth and Candida Höfer. The Bechers’ stark portraits of industrial structures, emphasising heavy geometric lines and arranged in grids, would come to inform Gursky’s later work, yet in these first rooms he turns his lens to the German countryside. 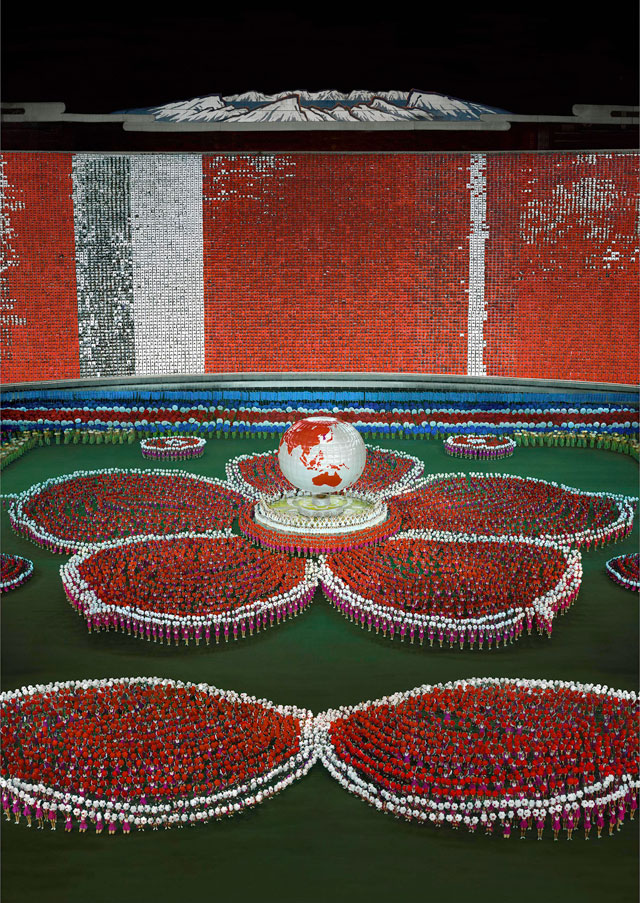 These understated pictures of rocky mountain outcrops, wide, lazy rivers and picnics in pine valleys have distinct pastoral overtones, yet it is only thanks to Gursky’s trademark high-resolution that we are able to discern the tiny, lemming-like figures populating the vistas. The camera is placed at a great distance from the action, inviting us to consider the figures in relation to their environment, rather than as individuals to be identified with. Instead, the drama comes from man-made structures: a motorway overpass punching across the overcast sky, an azure swimming pool bisecting a grassy knoll, a mysterious wire threading off into a thick bush. 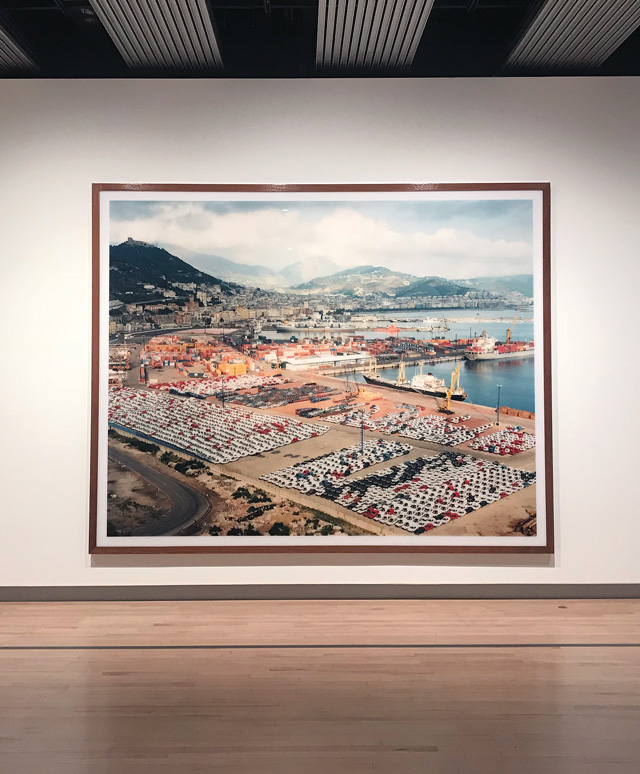 And then, suddenly, it turns: at the close of the decade, Gursky’s pictures started to sell, which afforded the artist the chance to travel beyond the Ruhr valley in search of new subjects. With Salerno I (1990), an image of the Italian city’s busy industrial port – which, Gursky admits to photographer Jeff Wall (in a conversation printed in the exhibition catalogue), was captured in the last few minutes before sunset shadows moved in – the artist first experimented with the “all-over focus” technique that would come to define his practice. We are floating high above the shoreline, the foreground a sea of red and white cars, giving way to towers of shipping containers, and residential high-rises in the distance. Gursky’s telephoto lens flattens foreground and background: details are crisp and colour-saturated, and there is no clear focal point. Gursky would later call this compositional technique “democratic”: no one element is more important than another, and the eye is left to wander over each at leisure. 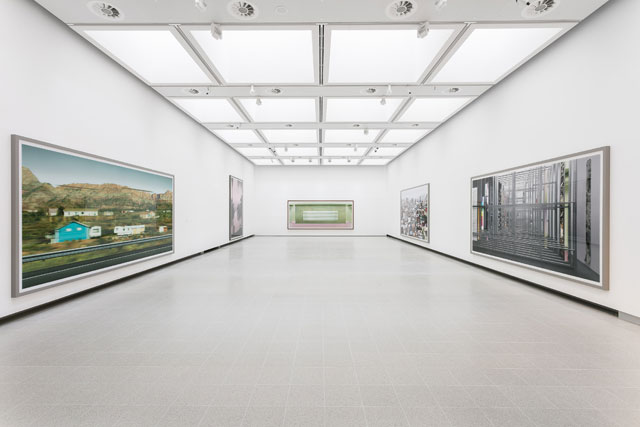 The main galleries – ceilings now skylit – house some of Gursky’s best-known works, where the advent of digital post-production allowed him to push his maximalist visual language to new heights. We are confronted at once with Paris, Montparnasse (1993), a four-metre-wide panorama of one of Paris’s largest apartment blocks. So great is the structure that Gursky was unable to photograph it without introducing perspectival vanishing points, where windows would appear to get smaller the farther away they are from the lens. To compensate, he took two photographs from different vantage points, and stitched them together, resulting in a perfectly flat lattice of 750 windows. 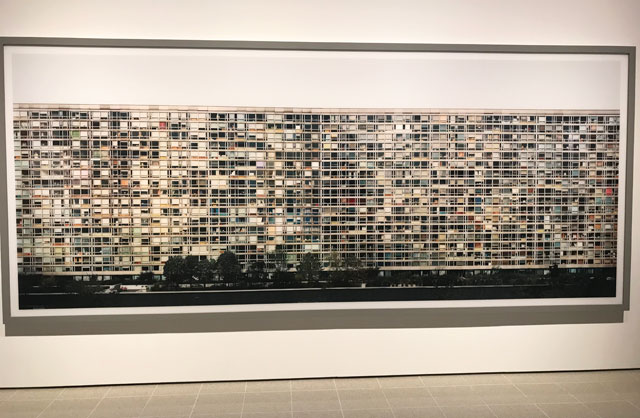 The finished image is uncanny in its lack of optical perspective, and presents a strange contrast of uniformity and individuality: from afar, we admire the perfection of the neat, multicoloured grid, yet, as every point of the frame is in clear focus, we are able to walk up to the image and pick out individual curtain patterns and windowsill ornaments. 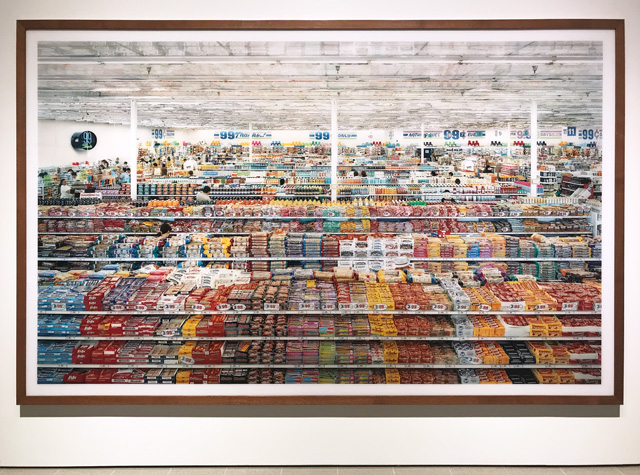 This hypnotic tension between the abstract pattern of the whole and the figurative detail of the constituent parts runs through much of Gursky’s photography. His work 99 Cent (1999, remastered 2009) showcases an enormous bargain store, a blend of several photographs multiplying the rows and rows of lurid candy-coloured wrappers into the distance and reflecting them on to the gleaming ceiling. May Day IV (2000, remastered 2014) is a four-and-a-half-metre-wide photograph of a crowd so vast that it bleeds out into the frame with no end in sight, each individual in perfect focus yet very much an insignificant atom in the great seething mass. It is easy to get lost in the mesmerising detail, or to try to locate the seams in the artifice. With Gursky, we leave behind our familiar conceptions of singular human perspective or temporal specificity, and approach a more transcendent perspective.

It is often remarked that, with their flattened perspectives and bold shapes and colours, Gursky’s photographs can be read as paintings, and it is easy to pick up this thread at the Hayward Gallery. Bahrain I (2005) is a standout, a surreal tangle of black racetrack against beige sand reminiscent of Franz Kline’s action painting. Gursky offers a wry wink at his abstract expressionist forebears in Review (2015), a “fictional photograph” placing Germany’s four most recent chancellors in front of a Barnett Newman zip painting. 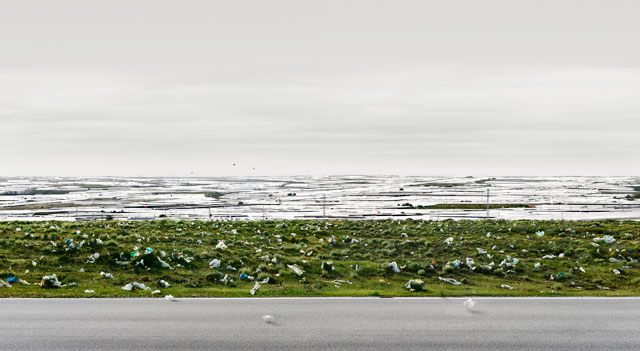 But in more recent works Gursky descends from high abstraction to more quotidian subjects: the famously expensive Rhine II (1999, remastered 2015) – it sold for $4.3m in 2011, breaking the auction record for a photograph – is displayed adjacent to a newer work, El Ejido (2017), in which the edge of a Spanish road echoes Rhine II’s minimalist colour bands, but the landscape has been polluted with rubbish from passing cars. There are also forays into iPhone photography, many of which do not sit well with the exhibition’s overall cosmic dimensions, although Utah (2017) is an exception, a large-scale recreation of a smartphone snap taken from a moving vehicle, prefab houses blurred and telegraph poles smeared into digital glitches across the desert mountains.

Gursky may play with abstract expressionist motifs, but his photography remains firmly rooted in the contemporary issues of global labour and capital. A swarm of Chicago stock traders face off against Vietnamese factory workers making cheap straw chairs for Ikea. Travellers in an airport terminal are dwarfed by the colossal array of data presented on the departure board above their heads; factory-farmed cattle penned in geometric fields stretch off into the horizon. In Amazon (2016), we see a sea of shelves groaning under the weight of assorted books and bric-a-brac, arranged haphazardly according to algorithms – and the stressed-out warehouse workers prowling the aisles are notably absent.

Ultimately, Gursky is unwilling to take sides in the debate: his digital embellishments present us with a hyperreality, simultaneously magnified and telescopic, and we are to approach them as a passive record of the anthropocene. Satellite views of our oceans and ice caps, or the sumptuous colours and symmetrical arrangements of the performers in North Korea’s Arirang Mass Games are presented without comment. This dehumanising lack of narrative is at once Gursky’s greatest strength and also a weakness: the most critical issues of our time are coolly documented, distilled to abstract aesthetics and left open to interpretation. An exhibition crammed with profound metaphors for our problematic age: there is no denying it, this is a must-see visual feast of epic proportions. 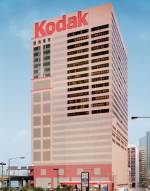 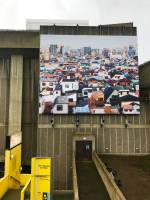