Phillip K Smith III: ‘The earth and the sky are the things that bind us’

Phillip K Smith III: ‘The earth and the sky are the things that bind us’

As he prepares to mount an illusionistic new installation in Milan, the American space and light artist talks time, technology and theatricality 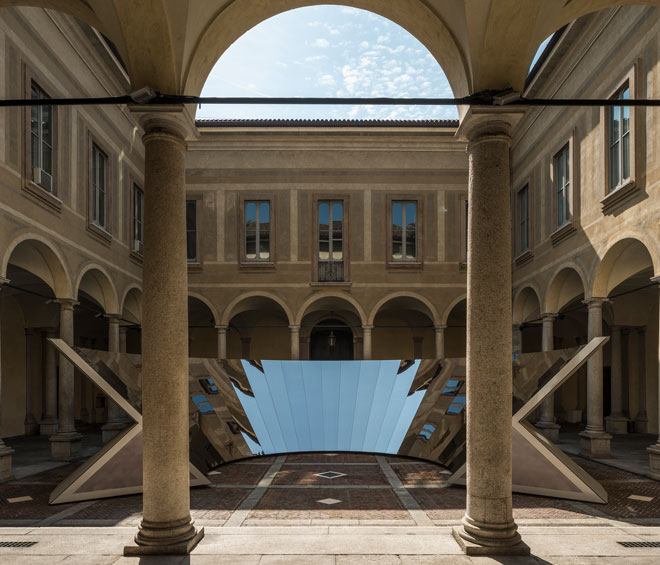 The work of American artist Phillip K Smith III exists at the interchange between chance and precision. His large-scale installations, created through meticulous calculation, are often activated by shifts in light, the sun’s position and the clouds. His Lucid Stead (2013), placed in Joshua Tree, California, in 2013, was a cabin with mirrored bands that seemed to half-vanish into the desert. With more recent works, such as Quarter Mile Arc (2016) on Laguna Beach and Circle of Land and Sky (2017) at the Desert X biennial in the Coachella Valley, Smith has created enormous curves of stainless steel that reflect and refract the landscape around them. They prompt both collective engagement and an individual experience, contingent on the viewer’s position and vision. 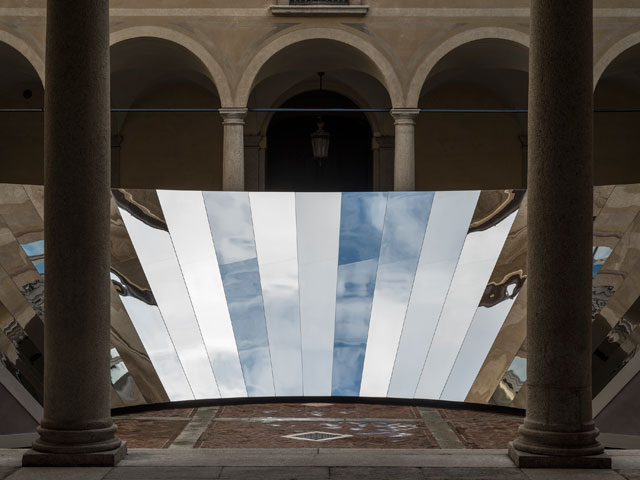 At this year’s Milan Design Week, Smith will premiere the site-specific installation Open Sky, in collaboration with the garment brand Cos. Housed in the courtyard of the 16th-century Palazzo Isimbardi, it comprises a horseshoe-shaped arc of mirrored panels that will reflect the surrounding architecture and – once you walk into the centre – the sky itself, as framed in the courtyard roof. Further works, on similar principles, will be installed in the palace’s verdant garden. It will be Smith’s first showing outside the US, and his first within an architectural setting.

Ahead of the sculpture’s installation, Smith talks on Open Sky, the precepts of his career and his artistic inspirations.

Joe Lloyd: First things first: how did this project come about?

Philip K Smith III: Honestly, I was contacted by Cos, and Karin [Gustafsson, Cos’s creative director] said they had been following my work and were interested in collaborating. I was hesitant at first – I’ve never worked with a brand before – but after looking at the kind of projects Cos has allowed artists to create, I happily said yes. And it’s been a really free and open process, fully supportive; it has been a real joy to work with. 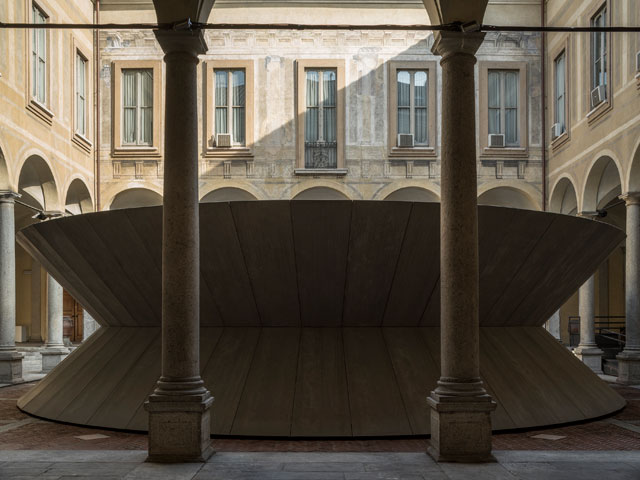 JL: Talk me through Open Sky. How will it work, and how will it relate to your oeuvre to date?

PKSIII: It certainly relates to my prior work, because the thread through all of it is light and change, and quite often the use of the environment. But this is my first large-scale work in an architectural setting. I spent my fourth year of architecture school at Palazzo Cenci in Rome, where our studios were, so I walked through a similar courtyard every day. And those palazzo courtyards are such beautiful spaces, because they perforate the core of a building with light and air. They’re open and yet intimate, and both public and private. And they open to a framed square of sky.

I wanted to create a piece that interacted directly with that sky, almost pulling it down to the ground. So, I’ve designed a reflective, facaded form. It’s horseshoe-shaped and centred within the space. It’s made of 34 polished stainless-steel mirrors that reflect the Renaissance architecture of the palazzo, but also the changing gradient of the sky. The whole colour and atmosphere of the piece is inflected by the movement of the sun and clouds. My hope is that people will come multiple times throughout the day, as it will be very different in the morning, at noon and as the sun sets. 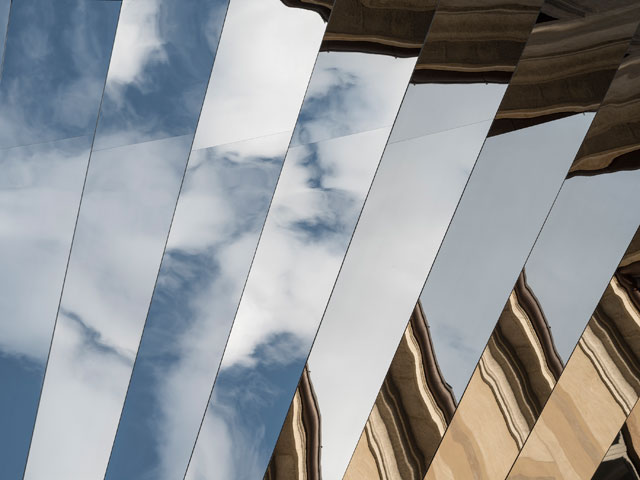 As you walk towards it, the architecture and fragments of the sky are trapped in the mirrors, moving as you move. And then, when you enter the centre, the entire sky is presented as if it’s sitting on the courtyard. You’re the one in control – the position of your eyes determines the nature of the work.

JL: As a trained architect, how do you feel architecture impacts on your sculptural, spatially motivated practice?

PKSIII: I think it taught me to place my ideas in support of a single, pure simple concept. And, from my training, there’s an understanding of detailing, connections, materiality and fabrication. And, also, the sense of scale and context. Most of all, perhaps, it taught me to think about human experience. How do people enter a space, how do they interact with it, how do they interact with other people within it? How do you craft an experience for both individuals and multiple people at once? In pieces such as Open Sky, your experience relates to where your body and eyes are in the space, making every experience unique. You can talk to others about it, but, ultimately, it’s your own experience, rather than a static work.

JL: Sustained interaction seems to stand at the heart of many of your projects. Why so?

PKSIII: I’m interested in celebrating the unity among human beings, whatever their background and beliefs. And I like the idea that people can engage with a piece multiple times – for different durations, at different times of the day as the sun rises and falls, at different times of the year. I think that injects a sense of discovery and allows people to perceive things that maybe they have taken for granted. The earth and the sky are the things that bind us. We all have some relationship with the sky, but when was the last time you just looked up at it? 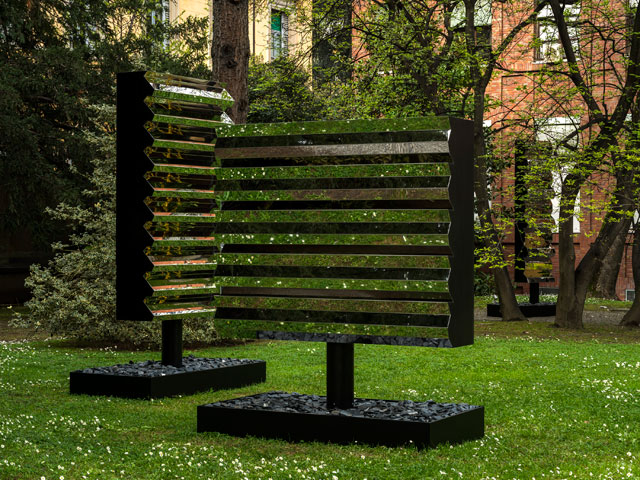 JL: The majority of your larger works are circular, or at least elliptical, in form. What draws you to this shape?

PKSIII: There’s a simple answer: the omission of corners. Corners force your eye to stop, which can be advantageous. So, when I’m working on a project where I want people to be focused in a moment, a circular form, without sharp corners, allows people to focus more. And geometry is a common language among us – we all know what a circle is, what a square is. For Open Sky, there will be a dynamic relationship between the square of the palazzo’s courtyard and the circular form of the piece itself.

Early in my career, when I worked with both circular and square forms, I found that half the people preferred one, and half the other. And those who chose the circle were a little bit more on the creative side, while those who picked the square were a little more calculating. It was very interesting! I’m fascinated by how we, as humans, relate to pure forms.

JL: How do you begin to conceive your projects?

PKSIII: It all depends on where I am: for the outdoor projects, it must begin by coming to the site. That’s the requirement for me. You need to be there to understand the subtleties of the place. I just finished a 550-foot-long [168 metre] arc that was up at Miami Beach during Art Basel Miami [120 Degree Arc East-Southeast] and coming from the west coast to the east coast was interesting. No one in Miami is going to come at sunrise, as everyone goes out at 12am and heads home at four in the morning. And the entire city is oriented to the east, so no one really does sunsets either. So, I realised it was a piece that was going to be seen predominantly from mid-morning to mid-afternoon, and it had to accommodate the bright white light of Miami by day. So that was built into the piece and built into the logic of how the reflections work and how they were orientated.

The other way that it all begins is, I have my sketchbook with me. I use a pen and start free-drawing. And that sense of drawing, and thinking through drawing, is paramount.

JL: After these initial stages, you then use computer programming to precisely calculate your installations. How would you describe your relationship to technology?

PKSIII: The reality is that, as an artist today, the tools that I have are unprecedented. And I feel I’m able to do my work because of these tools, many of them advanced by architects and designers rather than artists: 3D modelling, CNC milling, 3D printing. Even a decade ago, these tools were cost-prohibitive. It’s remarkable that I can, for instance, go to the cabinet guy who lives down the street for milling and laser-cutting acrylic. It’s commonplace now.

But I also see my work as part of a continuum. There are many artists I truly admire. There was a great interest in using space and light in art as early as the 1940s, when Abraham Palatnik and Carlos Cruz-Diez, in South America, built, for the time, highly technological advanced pieces with electronics that would seem very primitive now. And my neck of the woods – Southern California, Los Angeles, Venice Beach, going up to Nevada and the desert – is a real centre for space and light art. James Turrell, Robert Irwin and Dan Flavin are essential to me, because they came forth and said that it was OK to use light as a material. From my perspective, that’s as powerful as saying that it’s OK to use acrylic on canvas. I think these artists are much more influential than people give them credit for.

JL: I feel that, as much as light, time plays a crucial role in your practice.

PKSIII: My work gains its theatricality through the addition of time. In some works, it’s a component I’m in control of; in others, as the case may be for Milan, I’m willingly out of control of it, I’m setting up a surface that is open to changing circumstances. Whereas some of the smaller pieces in my studio, where I’m using LEDs and colours, can be crafted using digital software to control the pace of change as precisely as a painter in mixing paint. In Milan, though, I won’t be entirely in control: I can set up the environment that reacts to change – in itself a sort of theatricality.

• Phillip K Smith III’s Open Sky installation is at the Palazzo Isimbardi, Milan, from 17 to 22 April 2018.