The Changing Face of Oz

The Changing Face of Oz

For millions of people, The Wizard of Oz brings to mind the 1939 MGM movie musical starring Judy Garland. She is the image of Dorothy in the collective imagination, the one who clicks her red shoes to return home. 'No, this is not a Judy show,' says Michael Patrick Hearn, curator of 'The Wonderful Art of Oz', an exhibition of original art work at The Eric Carle Museum of Picture Book Art in Amherst, Massachusetts.1 'This show is not about the movie. There is not a single pair of ruby slippers in the artwork! Dorothy's shoes were silver!' declares Hearn. Author of The Annotated Wizard of Oz and long-time member of the International Oz Club, he has curated an exhibition that focuses on images inspired by the books by L Frank Baum (1856-1919), not the movie. 'This is the first museum overview of the art inspired by the Oz books,' Hearn says, 'and it shows the potency and longevity of Baum's original story'.

After the initial success of the first title, a new Oz book was published each year for the holiday season. Publication sparked the same intensity with which a new Harry Potter adventure is anticipated today. When Baum died in 1919, other authors continued the adventures of the beloved cast of characters. There are more than 40 Oz books. Fourteen were written by Baum, with 19 written by Ruth Plumly Thompson, three by John R Neill, two by Jack Snow and one by Rachel R Cosgrove.2

The first artist to illustrate Oz was WW Denslow (1856-1915), who created 24 black and white drawings for The Wonderful Wizard of Oz, published in 1900. The largest collection of these drawings is at the New York Public Library, and many are on loan to the Carle museum. The printer added the colours as they appear in the printed the book. The second title in the series, The Marvelous Land of Oz (1904), was illustrated by John R Neill (1877-1943), a young Philadelphia newspaper artist who initially followed Denslow's bold, graphic style. As Neill grew in confidence and was commissioned to illustrate additional Oz books, he developed his own more fluid and romantic style. Over time, Neill developed, used and mixed several styles, which looked back to the flowing 19th-century hand of WC Wyeth and as well as forward to the simpler graphic style of 20th-century advertising art.3

In addition to the two giants, Denslow and Neill, the exhibition presents four contemporary artists who have illustrated The Wonderful Wizard of Oz: Barry Moser (1985), Charles Santore (1991), Lisbeth Zwerger (1996) and Robert Sabuda (2001), whose pop-up version is a sumptuous celebration of Baum's fantastic world. Oz, The Hundredth Anniversary Celebration offered an abbreviated encyclopedia of artistic styles; the originals of several of those illustrations are included at the Carle.4 A particular highlight of the exhibition are the wonderful creations that were never meant to illustrate a specific text. With so much material, Hearn was able to organise informative groupings that present lively contrasts based on characters and themes.

As you enter the exhibition, a copy of the green cloth-covered first edition of The Wonderful Wizard of Oz is in a case on the right. No touching. No turning of the pages. It is out of harm's way. But what fun it would be to find in the book the reproductions of the original art exhibited on the walls! The museum staff members have anticipated this reaction and placed copies of the books in the galleries for visitors to read.

One extraordinarily energetic wall display includes three interpretations of the Tin Man: Tony Walton's 1978 costume design for the 'Tin Woodman' in the musical, 'The Wiz';Moser's 1985 wood engraving showing a man assembled from bits and pieces of metal containers and other detritus; and Eric Carle's transformation of his universally adored, paper-collaged Hungry Caterpillar into a jaunty tin man waving his funnel hat. These images testify to the by now universally familiar Oz characters; we know with certainty that each drawing is of the Tin Man, although the conceptions are quite diverse. Similarly, the cyclone that transports Dorothy's home to Oz is represented by a pair of images in a freestanding case. Sabuda's playful pop-up cyclone that actually twists when the page is opened lies next to Moser's dark vision of death and destruction. Other groupings revolve around Glinda, the Good Witch; the Wicked Witch; the exposure of the Wizard behind the curtain; and the entrance of the four friends into The Emerald City.

The largest work in the exhibit is the only nod to the famous movie, a 1981 Andy Warhol print of actress Margaret Hamilton recreated in her role as the Wicked Witch. Hamilton visited Warhol in his studio, where he snapped Polaroids in a non-committal, deadpan attitude, and then dismissed her. The final print is brimming with energy. A pulsating red line follows the contours of the monochromatic portrait and pointed hat, making the image seem to vibrate off the wall.

Two comic strips close the exhibition. They represent the estrangement that developed between Baum and Denslow when these two giant talents - and personalities - argued about the presentation of the lavish 1902 musical version of The Wizard of Oz. Since they retained joint copyright on the material, each was entitled to use it on his own. To promote the Baum books, Walt MacDougall was hired to create a Sunday comic strip. One episode, 'Queer Visitors from the Marvelous Land of Oz', employs the famous characters to tell a tall tale of survival in the ocean. Denslow retaliated with his own comic strip advertising the book he had penned, Denslow's Scarecrow and The Tin-Man. It is a coup for Hearn that he was able to locate and borrow both strips so they could hang side by side.

1. 'The Wonderful Art of Oz' opened on 11 July 2006 at The Eric Carle Museum of Picture Book Art and closes on 22 October. A full-colour, 32-page catalogue is available as a souvenir of this extraordinary show, but don't depend on that. There is no alternative to seeing the originals.
2. Between 1921 and 1939, Thompson wrote one Oz book each year. All were illustrated by Neill.
3. In all, Neill illustrated 35 Oz books, 32 written by Thompson and three as author/illustrator.
4. Glassman P. Oz: The Hundredth Anniversary Celebration. New York: HarperCollins, 2000. 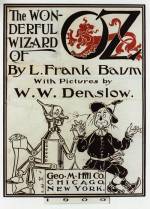