Sensation and Sensuality: Rubens and his Legacy

Sensation and Sensuality: Rubens and his Legacy

This true gem of an exhibition shows not only Rubens’ vast creativeness, but the incredible artistic influence he bestowed on those who sought to follow him

“My passion comes from the heavens, not from earthly musings.” – Peter Paul Rubens

Centre for Fine Arts, Brussels (BOZAR), in collaboration with its northern cousin Antwerp and the Royal Academy in London, presents a divine exhibition inspired by the sensational and the sensual that Peter Paul Rubens (1577-1640), this versatile “prince of painters” has to offer.  One hundred and sixty works, 44 by Rubens, examine both the artist’s own innovative oeuvre and the important and continuing legacy he left, educating generations of others.

A diplomat, a court painter, a role model, Rubens was certainly all of these things. He is firmly rooted in the historical and art-historical literature as an inventive genius and, of course, doesn’t need an introduction. Although not everyone universally admired him – the Protestants naturally loathed his “scandalous” work and, according to the popular Eugène Delacroix, Rubens couldn’t distinguish the main topic from trivial matters, creating chaos in his work – he did succeed in taking centre stage. One of the results of his vast creativeness is the artistic influence he bestowed on others, and that is exactly what is on show here at BOZAR.

The much anticipated exhibition combines the “sensational” – the forceful, loud, sometimes violent and barbaric scenes Rubens often created in the service of Catholic propaganda or absolutist rulers – and the “sensual”, which can be distinguished through more informal work such as family portraits, landscapes and pastoral scenes. Twenty paintings, six oil sketches, eight drawings and 10 prints by Rubens have been selected to form the centrepiece of the show. The curator have purposely limited the oeuvre on display to canvas and paper and thus have excluded, regrettably but rather sensibly, works of sculpture, although we know Rubens also had a profound influence on artists such as Auguste Rodin. BOZAR also decided to select only works bearing Rubens’ autograph. This is a real-world move, as Rubens’ talent has often been overshadowed or even “doubted” by the many inferior studio pieces that roam around and have been attributed to him.

Curator Nico Van Hout emphasises that this exhibition aims to further expand on a number of previous exhibitions, such as Rubens: A Master in the Making at the National Gallery, London, 2005, which aimed to show Rubens as “the heir to antiquity and the Italian Renaissance”.1 The visitor witnesses a play in six acts: violence, power, lust, compassion, elegance and poetry. In each of these sections, work by Rubens is being juxtaposed with that of artists who form next generations’ cohorts. Artists were, among others, captivated by the Old Master’s use of composition, colour and technique. The various themes here identified by BOZAR are well thought-out and emphasise what exactly it was that artists as diverse as Honoré Daumier, Delacroix, Jean-Honoré Fragonard, Gustav Klimt, Oskar Kokoschka, Charles Le Brun, Bartolomé Esteban Murillo, Pierre-Auguste Renoir and others took from their 17th-century teacher.

As Van Hout mentions in the thought-provoking catalogue to the exhibition, Rubens appealed to various nationalities for different reasons; the Spaniards, the Catholic south, admired his religious work, the English felt more drawn to his portraits and landscapes, the French, characteristically, looked for the eroticism and poetry in his oeuvre and the Germans preferred the vigour and vitality of the artist’s palette.2

Some artists envied his talent and failed miserably at “imitation”; Belgian painter Antoine Wiertz, for example, fashioned himself a master at Rubenism, but his creations, although enormous, have rather, been likened to caricature.

The artists on display here, however, prove that they repeatedly understood and related to Rubens. Although plump nudes are plenty, one of the most successful comparisons is the forceful hunting scene Tiger, Lion and Leopard Hunt, which Rubens painted in 1616. It is on display in the violence section next to The Hunting of Chevy Chase, painted by Edwin Landseer in 1825-26, in which the depiction of the horsemen and the vibrancy of the colours in particular can be likened to Rubens. An admiration for Rubens’ brushstroke and colours can equally be found in the power chapter where the artist’s Coronation of Maria de’ Medici of c1622-25 is juxtaposed with Delacroix’s Final reconciliation of Marie de’ Medici with her son Louis XIII of 1828. The elegance section appropriately contrasts Rubens’s remarkable Probably Marchesa Maria Grimaldi and her Dwarf from c1607 with Anthony van Dyck’s lavish Genoese Noblewoman with her son of 1626. Both painters were clearly interested in depicting the glamorous Italian elite eager to flaunt their status.

Especially, and this is a true treat, Rubens’ The Garden of Love (c1633-34), one of the jewels of the Prado collection in Madrid, travelled to Brussels. This grand canvas displays the true ability of an all-round artist at the height of his career. Preparatory sketches (from The Amsterdam Museum) and two drawings that laid the foundations for a print (Metropolitan Museum, New York) of The Garden of Love have been brought together here, enabling the viewer to observe both the production and intellectual process the artist went through from the initial concept, to the process of reproduction and sale.

With a plethora of extra events and both the novel and superior quality of the works on display, this exhibition is a true gem. It is a successful international collaboration working around a theme that proves Rubens, as a topic, is far from exhausted. 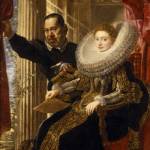 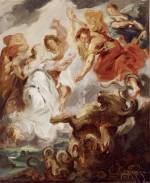 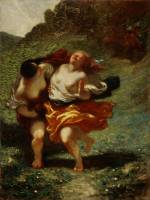