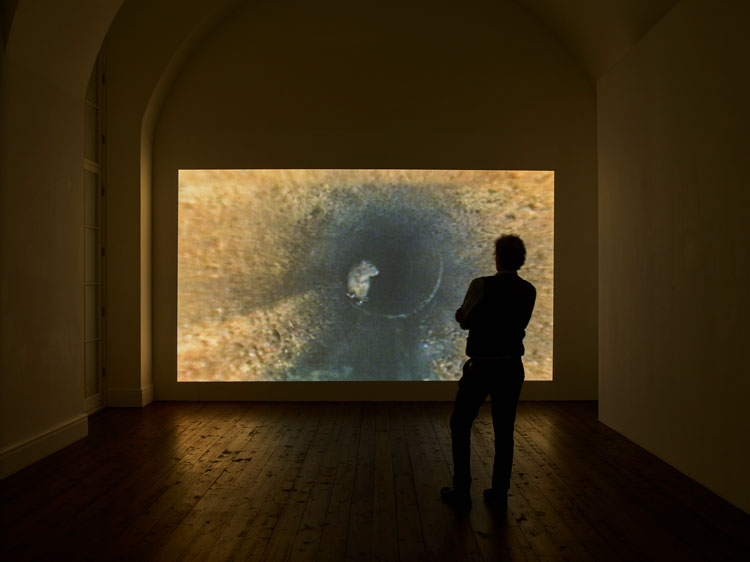 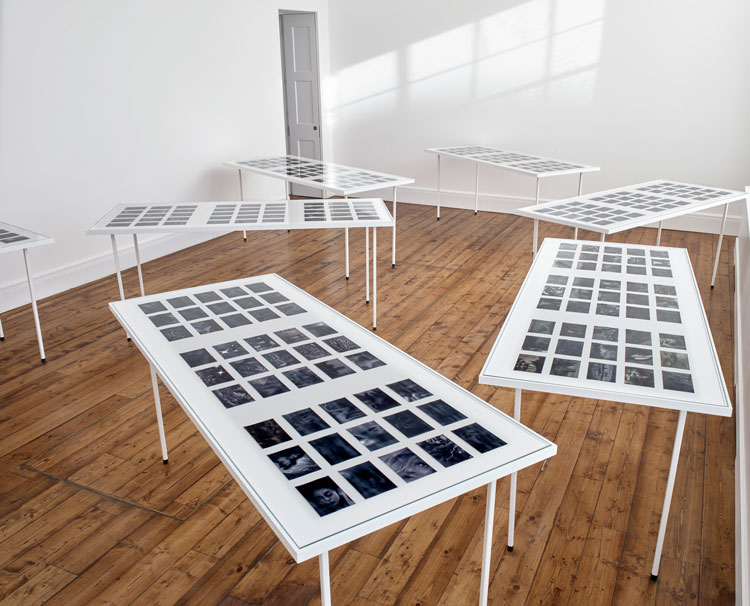 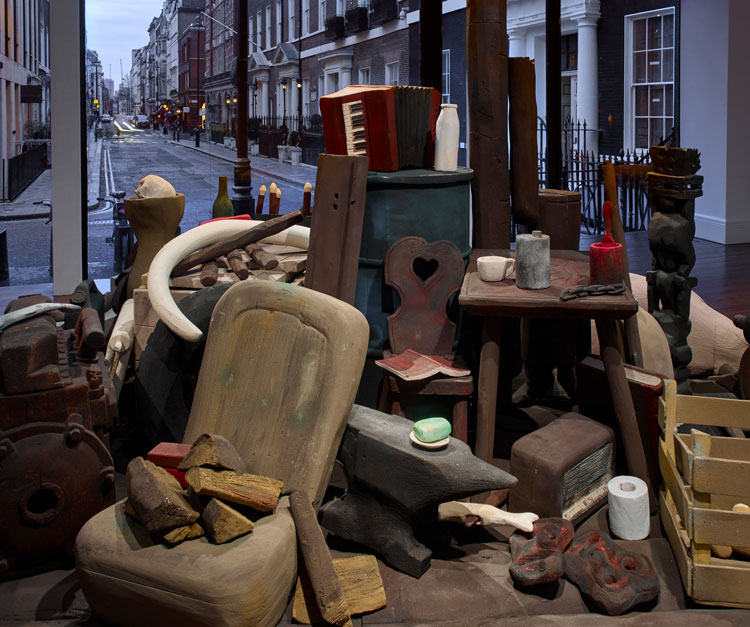 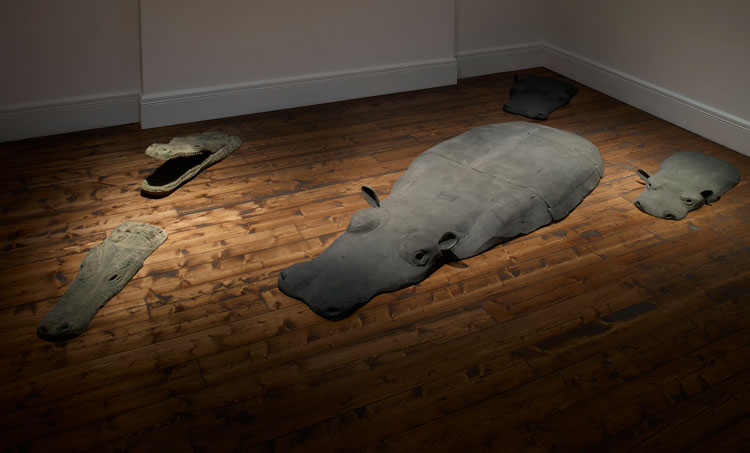 Peter Fischli and David Weiss – Should I Paint a Pirate Ship On My Car With an Armed Figure On It Holding a Decapitated Head By the Hair?

An exhaust pipe. A green bottle. A mammoth tusk. Two blue flippers. In Fischli and Weiss’s The Raft (1982/3), these incongruous objects huddle on a raft with a forlorn, broken mast.  They compete for space with a pig, her piglets, a bird and a dead fish. This curious congeries would float out at sea, even if for now it is only plopped on the gallery floor, because it, like the raft, is made of polyuretherane, a light and cheap synthetic foam, first synthesised in 1937. Odd objects, fake animals, cheap things. Nothing on this raft is older than the material of which it is made. There are cannons and combustion engines, but not computers; totem poles and rucksacks, but no televisions. These objects are illusions, illusions of a special kind: antiquated by the technology that can save them, made common by the material that can make them sculpture. A sad illusion, one whose workings we are meant to see. 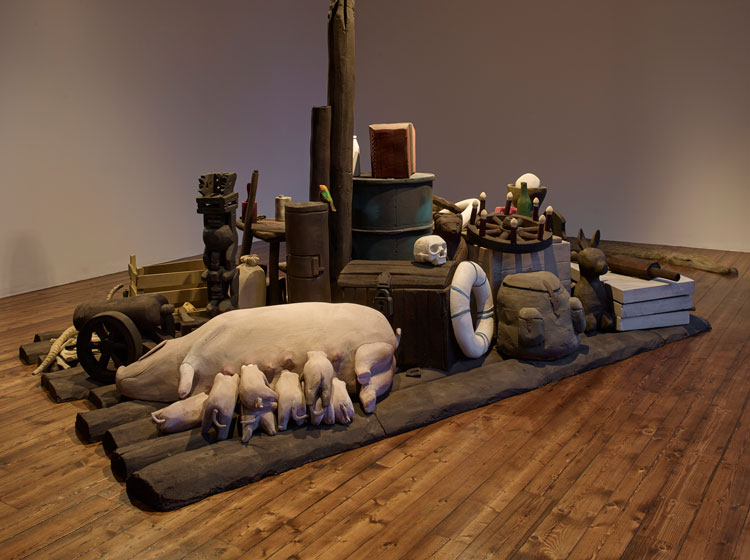 The Raft occupies the first of three galleries in Sprüth Magers, London, which display three different works by Peter Fischli and David Weiss that span the years they have worked together: from 1979, until Weiss’s death in 2012. While small, the exhibition serves as a capsule overview of their career, a condensation of the larger retrospective shown in 2016 at the Guggenheim in New York. A concern with the ordinary things collected on The Raft, and their relationship to art and its institutions, is one common theme in Fischli and Weiss’s work, and sometimes when massed together in a retrospective, it can seem like a dry, conceptual exercise: meditations on the readymade, the everyday, or institutional critique. The smaller selection on display here, appropriate for a practice concerned with minor things, allows the often-melancholy humour of their work a little more space to breathe, and the implications of that humour time to sink in. 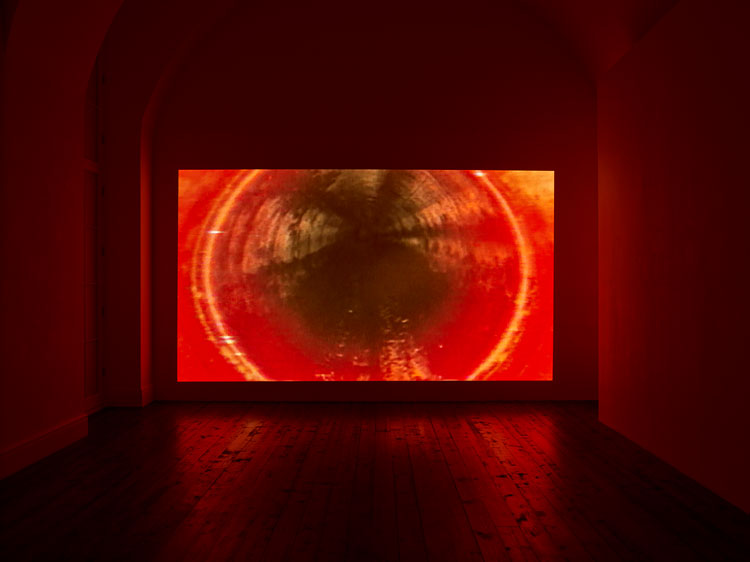 Downstairs, a large white wall shows a projection of Kanalvideo (1992): a 60-minute silent film recorded by a camera moving slowly through a sewer pipe. As the camera moves, you move – or, at least, it feels as if you move – through the tunnel, passing through circular joints, from darkness into light. It is hypnotic, but not so absorbing that it is not also boring, just boring enough to give you time to think about how much labour must have gone into making something so monotonous. To find such a length of pipe, or lay it especially for this video, carefully fixing the camera on to wheels so that it doesn’t fall over and spoil the take or get knocked aside by the rats it encounters. It is an excess of labour that seems absurd, pointing to the absurdity of an excess of labour.

These kinds of extended shots characterise some of the duo’s most well-known works, above all The Way Things Go (1987), a 30-minute film in which elaborate chain reactions, such as a tyre knocking a candle that lights a firework, are constructed to do simple things, such as emptying an ashtray. Immense creativity and labour produce an ultimately simple outcome: in the end, it is the delight of a cheap trick. The aesthetic theorist Sianne Ngai has written that the way in which the chain reaction seems to work too hard and too little – all the effort, for what exactly? – makes it an example of a “gimmick”: a device we laugh at for its ingenuity and disdain for the way it seems too obvious, to be working too hard, drawing attention to its own effort. Kanalvideo does not just film an elaborately constructed gimmick; in its absurd excess of labour, it is the work of art as a gimmick. It is a marvel of ingenuity, but it is also a little silly. But then, what is the right amount of effort that should go into a work of art, exactly? 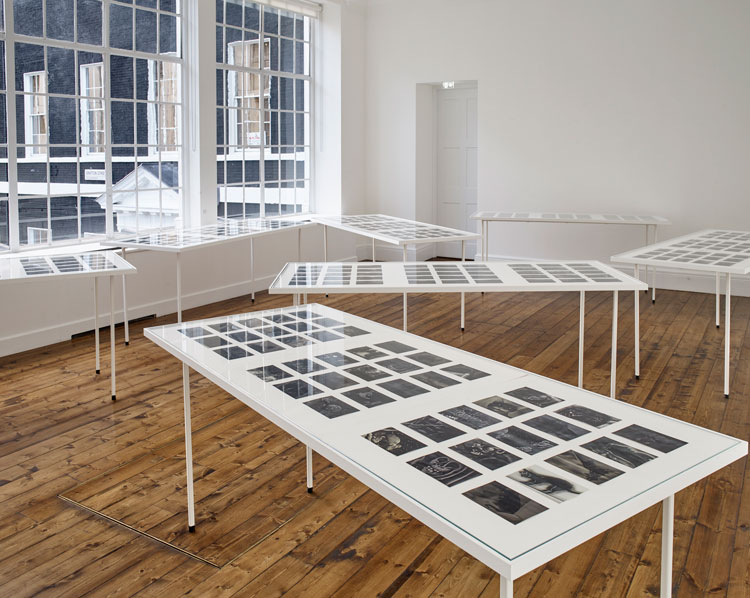 Upstairs, in the third and final room, is the most recent work. Fotografias (2005) consists of eight white vitrines, each displaying a grid of 45 monochrome photographs, each photograph the same size: the 4 x 6 inch prints of disposable analogue cameras. Each photograph shows a closeup of something commonly seen as equally disposable: the painted decorations on fairground rides in the funfairs and Luna Parks that crop up over Europe each summer. Closeup and cropped, the images become the material of surreal fantasy: a smiling spider, a chipmunk playing a guitar, a glistening pair of high-heeled shoes. Displayed in a grid, the installation appears like an archive of vernacular images, organised by categories: scenes of space, animals, racing cars, oceans. Classified according to type, the genealogy of the images that have entered this vernacular become clear. Some are new, such as Disney characters. Some are old, such as a crude devil that could be the descendent of an illustration from a medieval manuscript. 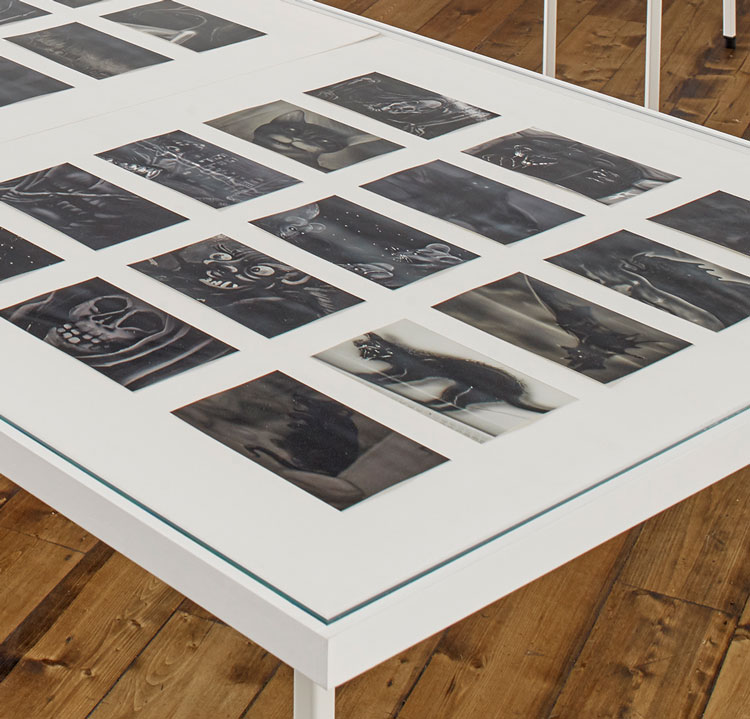 Peter Fischli David Weiss, Should I paint a pirate ship on my car with an armed figure on it holding a decapitated head by the hair? (detail), installation view, Sprüth Magers, London, 2020. Courtesy Sprüth Magers. Photo: Stephen White.

There is love in the collection of these images, but it is a love bound up with an urge for control: the grid, the typology, the classification. This rage for order is not so much left in tension with these images, nor the technique of surveillance simply juxtaposed with the riotous of the carnivalesque. Rather the urge for control and the labour it requires deflates into futility, collapsing and mocking its own urge for total domination. As if this collection could ever be complete; as if its production would ever be as enjoyable as a trip to the fair.

Fischli and Weiss’s art may be a practice that can laugh at itself, but it is a melancholy laughter all the same. It is not just that these photographs, like the objects on the raft, seem like relics of a lost ordinary. As with all their photographic projects, in which they redisplay vernacular images to show “the visible world”, Fotografias presents us with a world made visible to analogue film. The infinite images of digital technology, images which themselves are data for algorithms of surveillance, seem beyond their practice of self-mocking love. It is a self-deprecation in the face of the ordinary that seems all the more charming for being less and less possible.