Rego’s artworks are defiant and consuming. They depict suffering, oppression and cruelty, yet her figures consistently embrace it 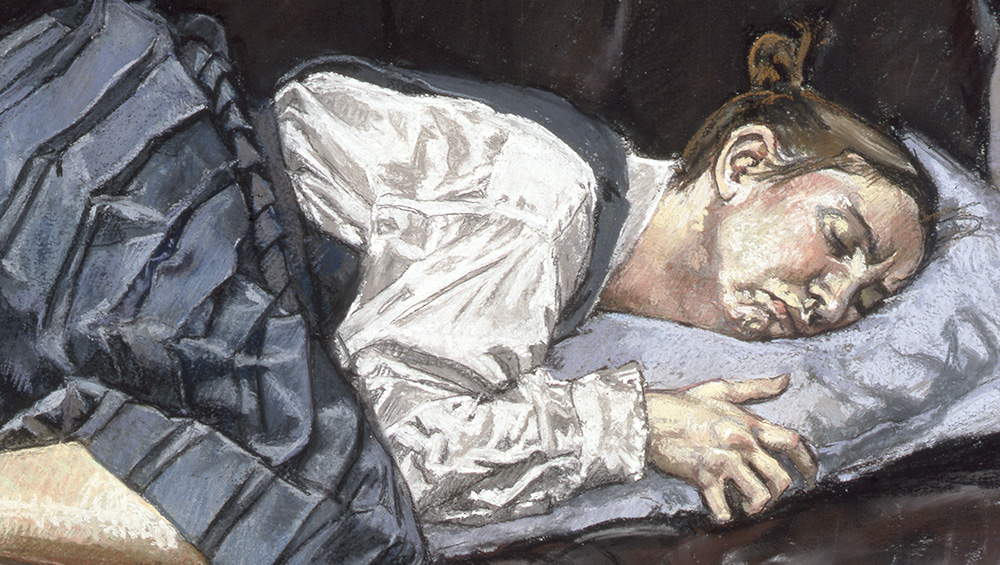 I have been standing in the first room of the Paula Rego show for about three minutes, having met two friends there, when an irate man comes up to us, eyes bulging. “Excuse me!” he bellows, a few inches from my face. “Will you please stop talking! I am TRYING to HEAR the PAINTINGS!” My friend Sam bursts out laughing, and then quickly corrects himself. “Oh,” he says. “You’re not joking.” No, he is not; his aggression is entirely, unreasonably, intentional. And so this is how we begin the provocative Rego retrospective, Obedience and Defiance – with a middle-aged man loudly trying to silence us. Rego’s work, it seems from the offset, is still very relevant.

We go upstairs to find Rego’s Dog Woman series, aptly – works produced over the course of Rego’s career, from the drawing Dog Woman (1952), made the year Rego entered the Slade School of Art, and met her husband, the painter Vic Willing, to Sleeper (1994), one of her first pastel works, in which a woman lies on her master’s jacket like a sleeping dog. Throughout these works, which mark not only different stages in her career, but also in her life and, particularly, her turbulent, complex relationship with Willing, the central themes of obedience and defiance are most marked and intriguing.

Rego grew up under the oppressive fascist regime of the Portuguese dictator António de Oliveira Salazar, in which the state and the Catholic church worked complicitly to control their subjects (especially women), and Rego’s work consistently and defiantly addresses complex power dynamics in various intersecting areas, whether through the prism of personal, romantic relationships or through overtly political issues such as war and political exile. In her Dog Woman series, she uses the image and mannerisms of dogs to explore the nuances and complexities of these power dynamics.

Sometimes a master, sometimes the obedient dog-like creature, Rego’s characters equate female and male sexualities and other behaviours to the characteristics of dogs, and, in their associations with one another, and other overt motifs from political discourse and Portuguese folklore, she connects these seemingly distinct issues. Is the master her husband or the church? The king or her mother? Her own sexuality? Rego’s painting and drawing is confrontational and yet so nuanced and ambiguous as to feel at times threatening simply in allowing that sense of potential, all-consuming chaos. Her characters, regardless of their role, seem to dominate their viewers with the same compelling combination of defiance and submission to their roles, their physical (often constrained) form, their closed and confusing environments.

The sense of submission, teasing and suffering is palpable in works such as Snare (1987), in which a girl in a voluminous mauve dress looms over a dog, mocking its powerlessness and impotence. In Untitled (1986), another young girl, wearing a hairband, puts a chain around the dog’s neck. Later on, women themselves resemble dogs: in Sleeper (1994), an adult woman lies in a doglike pose; it is not clear whether she has been punished or whether she takes comfort in nuzzling her master’s jacket – or, indeed, both. In Lush (1994), another woman sits openly like a dog, moody and yet unapologetic. These works reveal a deeply felt sense of emotional attachment borne out of obedience, whether cruel or kind, and, in so doing, illuminate the complexity of living in a way that is in some sense oppressed, even if that oppression is a willing and desired one.

In the context of the other works on show here – Triptych (1998), in which women stoically endure illegal abortions out of social and financial necessity, or The Crime of Father Amaro series, in which a young girl is caught up in an illegal affair with a priest – these images become all the more powerful and compelling. Although the Dog Woman series is often interpreted as articulating the complex desire and love that Rego felt for her husband, who died in 1988, the implication is that their relationship evolved as it did in this social and political context.

Meeting Willing at the Slade when she was 19, and he was already married, Rego went on to terminate several pregnancies as a student before going back to Portugal to have their daughter. They married in 1959, after he had left his wife and they reunited, and had two more children. He developed multiple sclerosis and Rego became his carer in the later years of his life. Their roles, therefore, evolved in complex, difficult ways: Rego was a young lover, a “fallen woman”, a mother, a wife, a carer. Life necessitated stark changes in role, far more complex than notions of “master” and “dog” would at first glance explain. But Rego’s works reveal precisely this: how binaries of power dynamics are simply markers that signal vast depths of human emotion, as we struggle to love and endure one another in wider systems of oppression and social hierarchy.

Though she sought to be a painter, “like a man” – an “art monster”, as some would put it – Rego could never escape being a woman, just as her subjects cannot (and perhaps would not) escape being dogs. Their passion is wrought from sacrifice. In Sit (1994), a pregnant woman crosses her feet, and in so doing mimics, subtly, the Crucifixion. In the series of etchings exposing the horror of female genital mutilation, Rego’s victims recall tortured saints, despite the brevity and minimalism of their production. Using these familiar motifs from religious paintings, she elevates the everyday suffering of women, recognising it and confronting it head on, never losing the nuance, ambiguity and darkness implicit in these scenes and situations.

Rego has pointed out the similarities between art practice and romantic relationships, adding a further, fascinating dynamic to this lifelong preoccupation with the power of desire and sexuality in a society that forbids it or, at best, complicates it. “Painting is erotic,” she says. “You do it with your hand. It’s the same feeling of being possessed by desire.” This point seems key: in painting, as in eroticism, Rego is defiant, even as she is consumed. All her characters are defiant and consumed in their situation. All her artworks are defiant and consuming. They depict suffering, oppression and cruelty and yet her figures quite consistently embrace it. In the film that is shown downstairs in the gallery, directed by the artist’s son, her daughter points out that, for Rego, endurance of pain becomes a sort of proof of love. “Look how much I will bear for you,” her paintings seem to say – and not simply to her late husband – but to life itself, and to God, despite the church. “Look how much I must love you, to endure all this.”

Rego has said before that she has suffered from periods of depression, and in those times she “draws herself out of it”. She “gives fear a face”, and in so doing she masters it. There is a sense here that in these images of suffering, confused desire, love and pain, Rego masters these forces (and people) in the act of painting or drawing itself. She endures and expresses aggression; she is the Master and the dog – to painting, to desire, to the political environments she finds herself in, often viscerally. 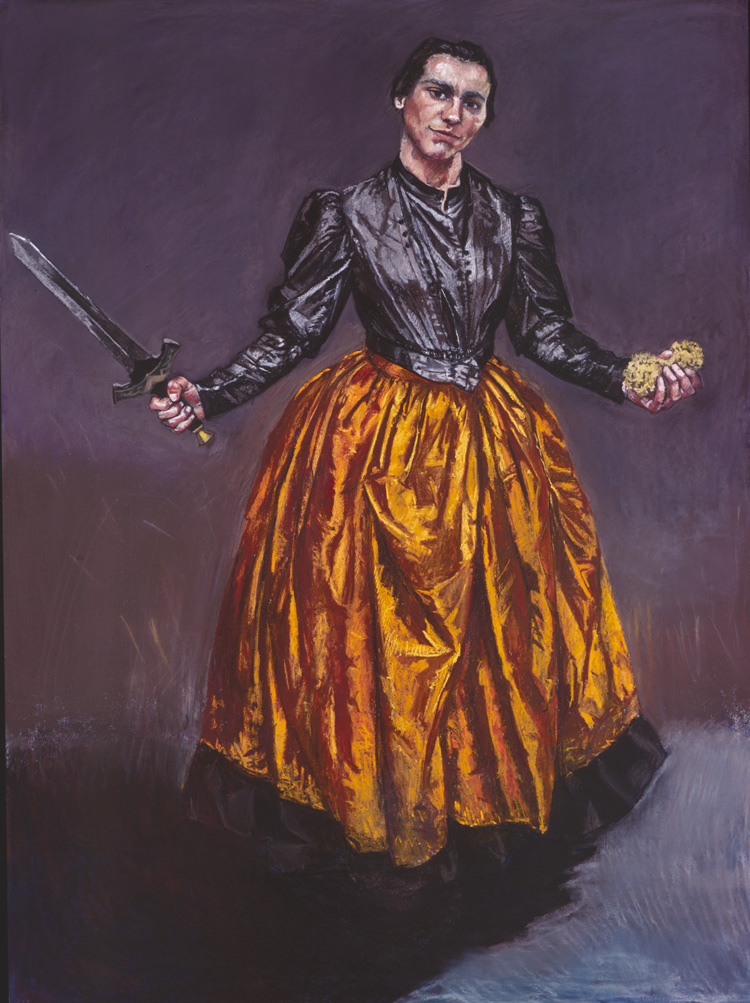 For me, the most memorable work in the exhibition is Angel (1998) – part of The Crime of Father Amaro Series – in which Rego depicts a woman in a silk dress, in gold and silver, holding the Christian symbols of a sword and a sponge, her hair pulled back in a dark bun. She is entirely defiant, her expression serious and yet somehow teasing, baiting. Is she asking for confrontation? Is she asking to sacrifice herself? Is she asking, after all this, for more?

The man downstairs is not the last to take issue with me and my friends. Another man paces around, then tells off my friend for taking a photo of an etching. More huff and storm out. The men are triggered it would seem; there is a funny feeling in the air. We smile at one another, roll our eyes, look the men in the eye when they complain to us, do not move. Surely Rego would enjoy this: how quickly her audience mimic her own work, how we all submit to her art, one way or another. How we become disciples of Rego.

Outside, later on, when the playfulness has died down, and the wider issues of obedience and defiance come back into focus, I go back to Rego’s work, flicking through the exhibition catalogue. Over and over again, these strong, stubborn faces, and the unconditional loyalty and love that they express. In these times of rising fascism, antisemitism and casual misogyny, Rego is quite simply a beacon of strength and endurance, a truly modern master. The purest, most visceral religion, she offers here. I can only bow to that.