A tender testament to the relationship of two artists, whose lives and work are inextricably linked, bringing to life the moor landscapes of northern Germany 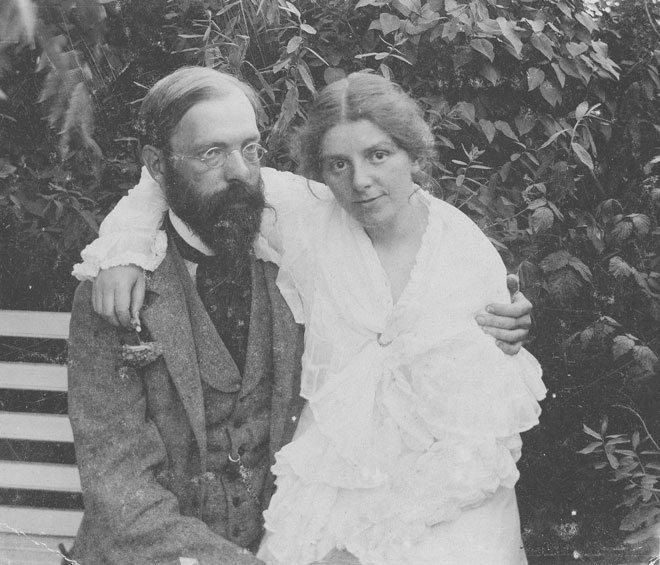 Otto and Paula Modersohn sitting in the garden on the bench, c1904. Photo: © Paula-Modersohn-Becker-Stiftung.

As I fall asleep in my narrow, creaking bed, with my close friend and travelling companion in the one beside me, I imagine the myriad conversations that took place in this room more than a century ago – between the artist Paula Modersohn-Becker (1876-1907), whose atelier this was, and her close girlfriend, the sculptor Clara Rilke-Westhoff (1878-1954), as well as with her husband and fellow painter, Otto Modersohn (1865-1943), and Clara’s husband, the poet Rainer Maria Rilke (1875-1926). What art critical and philosophical discourses might I have been party to, had I been a fly on the wall all those years previously? Outside the atelier (now a holiday apartment), the village of Worpswede retains the charm that attracted a colony of artists, spearheaded by Fritz Mackensen (1866-1953), to assemble here from 1884, and their varying houses can now be visited as museums and galleries, filled with paintings of the typical cottages with their roofs sloping down to the ground (exemplified by the atelier building itself, although the roof of the studio room was lifted, by Modersohn, to create a well-lit working space for his wife), the surrounding moor, the canal that was built to transport peat excavated from the moor to Bremen (30km to the southwest) on small boats with tar-brown sails, silvery birch trees and endless open skies. 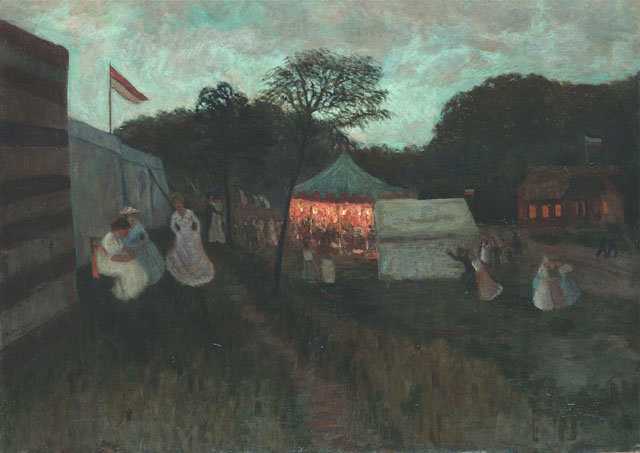 When the young Paula Becker first visited the village of Worpswede in autumn 1897, she saw the work of a number of the older male artists, but one of them in particular had already attracted her attention in the Bremer Kunsthalle earlier that year: Otto Modersohn. A diary entry from 24 July states concisely: “I want to get to know him, this Modersohn.” At the time, he was married to Helene, but he and Becker became firm friends, enjoying an intense theoretical and painterly dialogue, with her learning much from him, developing a style at once very much her own, but beating the same heartbeat and breathing the same air as Modersohn’s. 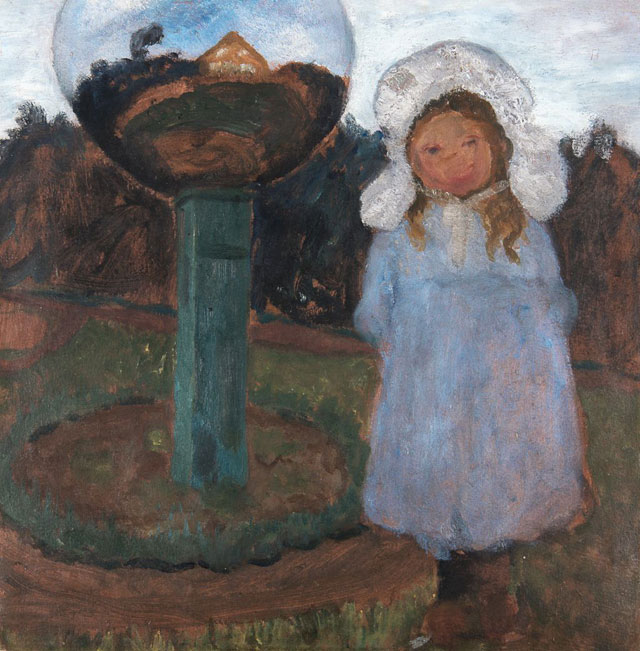 In 1901, following Helene’s death from tuberculosis, Becker and Modersohn married. Some versions of their tale today, including the 2016 film Paula (directed by Christian Schwochow), tell that the marriage remained long unconsummated, causing Becker to feel frustrated and unfulfilled in her role as wife, and seeking solace elsewhere, beyond the parochial confines of the small village. Whereas Modersohn stayed largely in Worpswede, caring for his young daughter Elsbeth, Becker spent months at a time in Paris, writing in her diary and letters of how she felt equally torn between the rural idyll that had become her home, with the women and children of the almshouse she so loved to paint there, and the culture, busyness and excitement of the French capital. 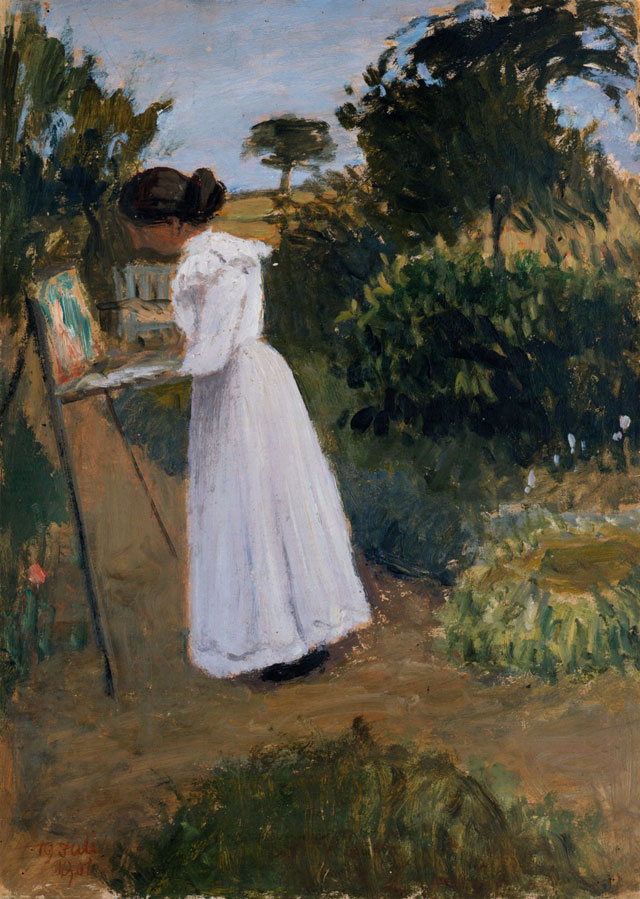 Her letters to Modersohn, however, also bear testament to the depth of her love for her “red-beard”, as she affectionately termed him, and their relationship as artistic contemporaries, best friends, mutual critics and influences in terms of artistic development and style only deepened with time. This thorough and long-overdue exhibition, in the Bremen museum named in Becker’s honour, examines that symbiotic relationship, showing side-by-side, in themed rooms, the paintings of husband and wife that so vividly bring to life the landscapes and people of the small northern village on the moor. 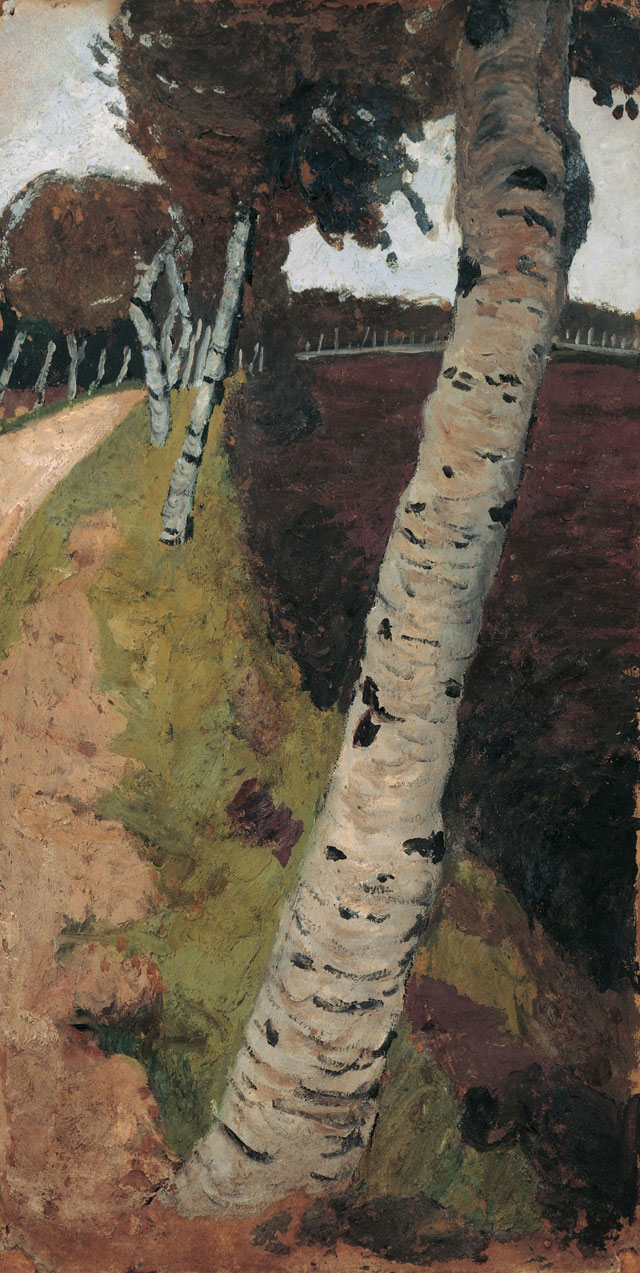 Becker, on the whole, was more interested in people than landscapes, and her paintings of the moor seems almost to personify the canals and birch trees. Where human figures are present, they are integrated into the landscape. It is interesting where we can compare Becker’s and Modersohn’s versions of the same scene: his are always more detailed and “accurate”; hers are simplified, evocative, asking both more and less of the viewer – more in the sense of needing to add details and fill in the gaps; less in the sense that you can just look, recognise and relate, without needing to “read” the work and decode it. 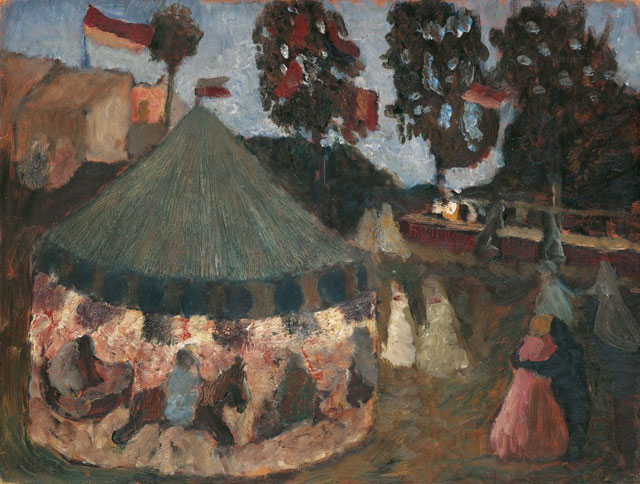 Parisian influences are apparent in Becker’s work, from the Egyptian mummies in the Louvre to contemporary artists such as Paul Gauguin and Vincent van Gogh. Her style, with its endearing almond-shaped eyes and sculptural, simplified shapes, might appear naive, but, in his diary entry of 27 July 1900, Modersohn unequivocally declared: “She has no trace of the naïve.” Frequently criticised for her “paw-like” hands, Becker was more interested in suggesting a sense of presence and physicality – or the assumption of space in the world. One might imagine she was also seeking to express feelings – but whose? The sitters’, or her own? Her preferred models were simple country folk: old ladies and children, who doubtless couldn’t read and would have known nothing of the art and philosophy that Becker and the artists in the Worpswede colony discussed among themselves. They came from two different worlds, yet Becker was present in both.

One almshouse sitter painted often by both Becker and Modersohn was Anna Schröder, known as “Dreebeen”. In Becker’s Studie zur sitzenden Dreebeen im Garten (Study of Dreebeen Sitting in the Garden) (c1904), she zooms in close, allowing the figure to dominate the composition, whereas Modersohn’s Anna ,,Dreebeen” Schröder im Garten des Worpsweder Armenhauses (Anna “Dreebeen” Schröder in the Garden of the Worpswede Almshouse) (c1902) incorporates a wider landscape, in which the figure is just another feature, alongside pecking hens, falling shadows and scudding clouds. Similarly, in their paintings of the annual Schützenfest (a traditional fair featuring shooting matches), Becker’s lantern-carrying children are faceless shapes in the crowd, of which she is very much a part, whereas Modersohn’s compositions are much more traditional, detailed and descriptive, painted from a further distance, relaying a narrative. 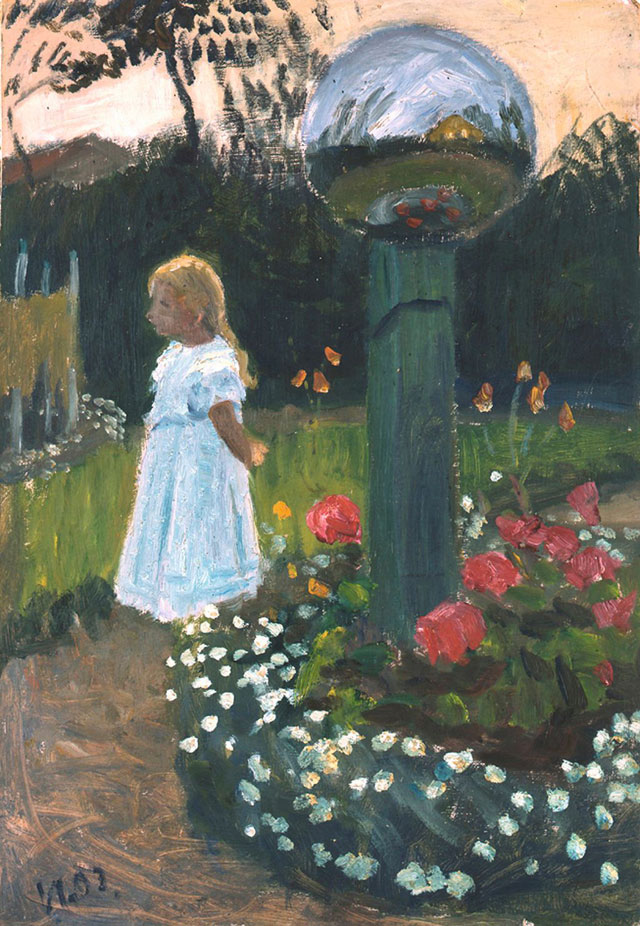 There are many paintings of one another and Elsbeth in their garden, with the typical Worpswede garden ornament, a glass ball planted on a pole, and a painting by Modersohn of his daughter’s dolls, laid out exactly as they are now in the Modersohn Haus, which can be visited in Worpswede, and which permanently contains works by the couple, as well as an extended exhibition space, with a changing programme. Becker’s paintings of Elsbeth from 1901-02 render her almost more doll-like than Modersohn’s depictions of the dolls themselves.

The exhibition obviously includes Becker’s most-famed Selbstbildnis am 6. Hochzeitstag (Self-Portrait on her Sixth Wedding Anniversary) (1906) (part of the Bremen collection), said to be the first female nude self-portrait, and full of riddles. Despite appearing pregnant in the image, she wasn’t. This was to become reality a year later, and, 19 days after giving birth, in November 1907, Becker would tragically die of an embolism, aged just 31, gasping the final utterance: “What a pity!” There is an overwhelming sense of intimacy in this self-portrait – something with which Becker sought to imbue her work – here, perhaps, of a lonely young woman in a foreign city dreaming of the most intimate relationship ever possible: that between mother and child. Equally intimate, but in a lighter and quite humorous way, is the final room, filled with drawings, photos and letters of and by the couple. A highlight is Modersohn’s series of pictures from 1905 of Becker doing her daily exercises – naked! – annotated with hand-written rhymes. Again, this offers insight into the loving and companionable nature of their togetherness. 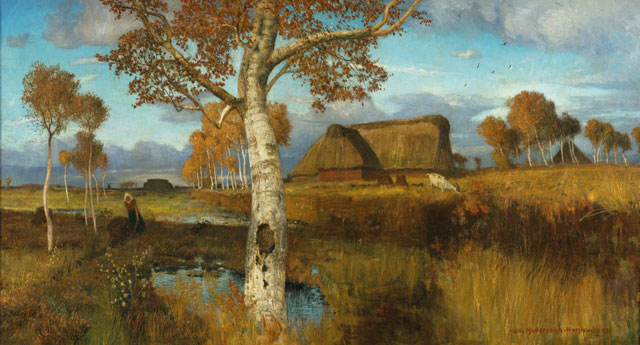 A large room is dedicated to Worpswede landscapes and, in it, you can almost breathe in the fresh, peaty air. Modersohn was primarily a landscape painter, who captured different atmospheres with exceptional nuance, including the varying moons, fogs and floods. The movement of water, reeds and grasses is suggested by his scratching into the surface of the wet paint to create radiating ripples. In contrast, Becker doesn’t scratch the surface of her works, but uses dry brush strokes, with their fractured lines creating that same sense of motion.

Both artists’ landscapes are necessarily composed of a palette of browns and greens, with the moor bearing the name “Teufelsmoor”, deriving from Plattdeutsch (a Low German dialect), meaning “barren”, but Modersohn also captures the delicate colours of the clouds: their whites, pinks, peaches, lilacs and greys. And then there are the silver birches, so prevalent in both their works, with their leaning trunks appearing to dance and sway, telling stories of survival against the harsh winds on the wide-open moor, their mottled bark brazen like battle scars. A row of three paintings of these trees – by Modersohn, Becker and Modersohn respectively – works wonderfully as a triptych, as complex and characterful as any portrait. Both artists also painted numerous pictures of a young girl – often Elsbeth – leaning against a birch tree. Another room is dedicated to these, showing their joint vision of a union between nature and humanity.

Being there in that open landscape, with the immense skies and ever-changing clouds, it is easy to let go of city cares and concerns and experience that sense of unity, or oneness, with nature. The tall trunks of the silver birches become your peers. The baby oaks seem as vulnerable and in need of protection as any human child. The clouds become the television screen, telling stories as they mutate, skip, merge, kiss one another and scuttle away. And the smells overwhelm: wet peat, cut grass, wild flowers, different seeds and leaves. There is an absolute sensory overload, but in a happy and freeing way, quite unlike the digital bombardment of today’s world, or the fumes and noise of the city. All of these feelings live on in the brush marks of Becker and Modersohn – timeless documents of an unchanged yet ever-changing place. And this exhibition is both a tender testament to their relationship and a significant showing of two artists, whose work is inextricably linked. 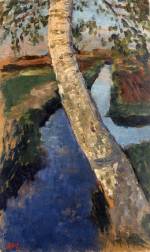 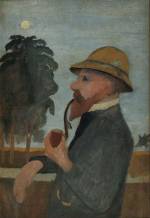