Paul Coldwell’s exhibition at the Freud Museum, London explores our relationship to objects and the manner in which meaning is projected on to them; scale is amplified for the charm bracelets made to heighten the associative meaning and connotations of objects that are both quotidian and highly symbolic.

Research at the Bethlem Royal Hospital Archives and Museum provided a starting point for his new work, part of the Anxiety Arts Festival in London, which runs throughout June 2014. The Bethlem Hospital Museum records the lives and experiences of people with severe mental health conditions, using the hospital’s long history as a means of establishing a context for an exploration of mental illness.

Historically, mental health has been associated with stigma and shame; patients were often restrained and effectively held against their will; treatments that, with hindsight, aggravated rather than healed patients with conditions that were for years largely misunderstood. The detrimental impact on a patient’s self-esteem, their condition and treatment was significant, and self-worth was undermined; the establishment of an acceptance of self was a key to recovery.

Coldwell has focused on the relationship between the patient’s treatment and identity, using simple objects for grooming to refer for the need to assuage the loss of dignity in patients suffering from mental health disorders. He has used archive research at the Freud Museum in London (1996) and most recently his project Re-Imaging Scott: Objects and Journeys was the consequence of research at the Scott Polar Research Institute in Cambridge (2013).

JMcK: You have an association with the Freud Museum going back to 1996 when you created works around the notion of journey, with the transformation of familiar everyday objects with their transportation through emigration. Can you tell us about the works: Freud’s Coat and The Arrival?

PC: In 1996, I was given a very open invitation to respond to the Freud Museum and present the results in the upstairs gallery. I was initially very intimidated by the presence of Freud and began to think that I would need to become a Freud scholar before I could create anything. However, one chance conversation with the then director led me to the coat that Freud had purchased for his immigration to London from Vienna. This was a turning point; the coat was surprisingly small, a thin woollen grey overcoat and, suddenly, instead of seeing one of the towering figures of the 20th century, I saw an old man forced into exile. I made an artist’s book, my first, taking details of the coat collaged into photographs of artefacts in the museum. Interspersed were quotations from his diaries such as “How impossible to flee ones fate”, in fact a reference to his birthday celebrations, but poignant in its implication for a Jew fleeing the Nazis.

I also made The Arrival, a set of sculptures in the form of cases, suggesting the exile and setting up of a new home. Each case took the form of an object, a house, ironing board, suitcase, and each opened as if it had contained the object itself.

JMcK: How has your new work evolved from the 90s?

PC: I was relatively secretive about my sculptural works, instead pushing the prints, but throughout the 90s I grew more confident in the objects and they, in turn, impacted on the prints. This new work for the Freud Museum is still connected to objects and our attachments, but I would hope it’s clearer now.

JMcK: In the 18th and 19th centuries, the Bethlem Hospital was referred to as the Bedlam, making reference to it being a chaotic and unpleasant place. Mental hospitals have historically conjured images of prison, as fearful places where patients often remained for interminable periods. What first drew you to carry out research there?

PC: The anxiety project immediately grabbed my attention when I heard about it and I wanted to be involved. The idea of me looking at the Bethlem archives was suggested at one of our project meetings and I followed it up really out of curiosity. My interest in the archive was not macabre but looking for the ordinary, the little things that enabled me to picture circumstances where I might become the patient rather than the researcher. What drew me to the overall project was that I consider myself constantly in an anxious state: it something that gets me out of bed and motivated. I suppose I would see it as essential to my existence. But I can really understand how further along the spectrum, anxiety can be disabling.

JMcK: You have chosen apparently inconsequential objects to explore dignity and self-worth.

PC: Yes, I’ve been drawn to the very simple objects with which we share our lives, the intimate objects, comb, keys, toothbrush etc – in themselves valueless, but to the individual priceless. They also are how we prepare ourselves to meet the world: we comb our hair, brush our teeth – on one level very basic, but without these props one quickly becomes outside of society.

JMcK: Photographs form an important part of the archive at the Bethlem Museum and Archive. What did the images impress on you?

PC: Well, photographs always carry that sense of mortality; the attempt to capture a moment is in itself a reminder of time passing. But there were two sets of photographs that struck a chord: one a set of before and after treatment, the patients reordered and looking presentable; the second, a set of photographs of the staff in fancy-dress costume and, within the context of the hospital, how strange these images appeared. They blurred that distinction between patient and doctor, between, prisoner and jailer.

JMcK: Can you describe your work Ghosts and Empties?

PC:Ghosts and Empties takes its title from a line in the Paul Simon song Graceland and consists of everyday objects – toothbrush, soap, shaving mirror – each cast in white resin. I wanted to suggest a life through these objects, now devoid of colour, detail and anything bar its shape that might distinguish one from the other. They are the remains of a life, ghosts, emptied of their former selves.

JMcK: Can you describe the connection you sought to make between charm bracelets and patient restraints? Between lucky charms and anxiety?

PC: In the archive I found images of restraints used on the patients and I made the connection between the physical restraints and those mental or psychological restraints that we all carry with us: the mortgage, marriage, responsibilities all by degrees can become burdens. I simply wanted to make a poetic association between the innocent charm bracelet and something more oppressive. Furthermore, in our culture, which we assume to be based on rational thought and logic, the transference of power on to inanimate objects is manifold. The middle-aged man wearing the football shirt bearing the name of his hero, the woman clutching a designer bag bearing a cherished logo all seem to connect to a wish or need to believe in something.

JMcK: Materials and scale are both central to your sculptures in the Freud Museum exhibition. Please explain how these works were conceived and made.

PC:Charms I & II were made in wax and then cast directly in aluminium. They are intentionally crude, imaging how the little charms on a real charm bracelet would seem when greatly enlarged. Each of the motifs was selected to reflect the kind of objects on charm bracelets and is intended to represent desires. The chain was a steel security chain purchased from a DIY store. I also made a version, which I had made in glass, bringing with them those qualities of transparency and fragility.

JMcK: The history of mental illness, anxiety and popular music seems an unlikely connection. Please explain how your series of postcards: A Soundtrack to an Anxious Life came about?

PC: While I was working on the sculptures, I had the radio on and became aware of how many songs suggest yearnings and desires. I began to put together a list of songs that I really liked and those that, in their titles, expressed anxieties – titles such as Will You Still Love Me Tomorrow? or What Becomes of the Broken Hearted? Together they seemed to reveal a hidden level of anxiety, those common fears of being alone, unloved and lost. We all develop special affections for songs and how, through these, we are able to convey our deepest fears, as if by proxy. Each title was put with an appropriate image of one of the charms to add a further resonance.

JMcK: What do postcards signify in your work practice in this context?

PC: I used postcards as one of the pieces I made for the Scott project. I like the idea that postcards combine an image with the space to write. The size of the postcard, like a tweet, imposes brevity, but essentially when you send a postcard it is a coded thought from the sender to the recipient that also has to go through a physical journey (the postal system) where it bears a record of that journey, it’s franked, dated and open to anyone en route to read. I also like the fact that we pin up postcards or attach them to the fridge, making our own private gallery of images we love. 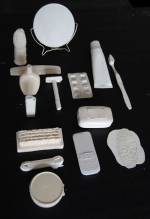