At an exhibition of Oswaldo Vigas’s work in Bogotá, his son Lorenzo talked about his father’s love of people, how mythology and witchcraft shaped his output, and his friendship with Picasso

The Venezuelan artist Oswaldo Vigas was born in Valencia, Venezuela in 1923 and died in Caracas in 2014 at the age of 90. While he achieved a degree as a physician and was always profoundly interested in science, he never became a practising doctor, preferring art instead. A child prodigy of sorts, he was considered to be in the vanguard of Latin American art, celebrated in his native country and exhibiting internationally from an early age. Venezuelan art historian and art critic Bélgica Rodríguez called him an “isolated figure” in Venezuelan art, underscoring his uniqueness, a standing similar to Wifredo Lam’s in Cuban art.

One of his innovations was to presciently, precociously mingle Venezuelan indigenous traditions with European and American modernism, the prehistoric, mythological and anti-rationalist sharing space with the formal, the geometric and the ordered. His curiosity was boundless, deeply influenced by pre-Columbian fertility figurines, African sculptures, 17th-century Spanish masters, the School of Paris, CoBrA, abstract expressionism, neo-expressionism and more, with no self-imposed off-limits sign to restrict his inspired, idiosyncratic jumbling of cultures and chronologies.

By the early 50s, Vigas had created his signature figure, the bruja (witch), which earned him much praise, marking him as a young artist of great promise. Winning a coveted prize that enabled him to go to Paris (he was the recipient of many such prizes from the beginning), he remained there until the late 50s, befriended by artists of renown, including Picasso, Lam and Rufino Tamayo. He returned home, but Paris soon drew him back, and he stayed this time until 1964, when he returned to Venezuela permanently.

It was in Paris that he began to paint abstractions, his artistic lexicon expanding to include constructivism and cubism. In his second extended sojourn in Paris, his brushwork became increasingly expressive, even lyrical, in a reaction to geometric modernism. He espoused the informal, l’art brut as well as process, and his work became increasingly visceral and tactile, the surfaces built up with layers of paint. Figuration soon dominated his production, but he nonetheless retained geometric forms in his work, inventing a parallel vocabulary of signs and symbols to accompany his figuration, referring to the political and economic turmoil of Latin America at the time.

In the next decades, his scope broadened even more, as he delved into sculpture, textiles, printmaking and ceramics. By the 90s, he had evolved a very personal iconography of symbolic creatures that included mythological beasts and demons, fantastical birds and equally fantastical women and witches. As he neared the end of his life, Vigas began to draw incessantly, and also to write poetry, an early love. He began a series of paintings called Crucifixion and continued to work with unabated vigour until a few days before his death. A monograph on Vigas is scheduled for publication in 2016.

The following is an edited version of a Q&A session that took place with the artist’s son, Lorenzo Vigas, a Caracas and Mexico City-based film-maker, at the Museo de Arte Moderno de Bogotá, where Antológica 1943-2013, a seven-decade survey of Vigas’s work was on show.

Q: You are a director and writer of screenplays. How did your father influence your life?

A: I followed the same pattern as my father, from science to art. I studied molecular biology but then decided to make films.

Q: Was your father interested in science and art all his life?

A: He was very interested. He had an analytical side and an irrational, impulsive side. In the moment of creation, the emotional side took possession of his soul and that’s when he became the artist.

Q: Did his interest in the figure come from his study of anatomy?

Q: Was that cultural?

A: It might be cultural, but it was also personal; he couldn’t stand to be alone. He was 100 per cent social.

Q: What was his first exposure to pre-Columbian figures, since they were so important to his work?

A: His first works were mainly surrealist, not influenced by pre-Columbian culture at all. But when he was living in Tinaquillo and Guacara – he was in his mid-teens – he had a friend whose father was a very prominent archaeologist. Seeing his collection was an important moment for my father. After that, he became obsessed with petroglyphs, familiar to him from childhood. He went to see all the petroglyphs in Venezuela, which took him to Guajira, on the border between Venezuela and Colombia. There, he found an ancient culture, Indians who lived as they had lived 1,000 years ago, who painted their faces and made beautiful pottery with a particular kind of drawing. He said he found the root of his work there.

A: He was around 20. A year after this, the Witches series appeared. He was in Caracas by then, because he was anti-dictatorship and active politically and had had to flee [the city of] Mérida. The authorities were after him.

Q: Would you discuss the Witches series?

A: The first series was from 1951-52 and consisted of just 15 works. After that, he found the archetype. My father’s work is grounded in the feminine, in fertility figures. He had painted a series based on women from the Andes in which he began to deform their hands. His witches were a synthesis of these with pre-Columbian figures.

Q:  Who first called them witches?

A: A celebrated Venezuelan poet came to my father’s studio and said, looking at the paintings, those are witches – and my father liked the term.

Q: What role do witches play in Venezuelan culture?

A: I think it’s a universal archetype, not specifically Venezuelan.

Q: When did he begin to make sculptures?

A: In the 80s and he continued to make them until his death. Some are very large, nearly four to five metres – he left one called The Amazon, now cast in bronze, a late sculpture, which will be installed in a hotel in Miami soon.

Q: Do you think his work is gaining renewed momentum?

A: Yes, it was inevitable. He was an important figure in Latin American art, an innovator. It is an important body of work and now that museums are interested, there is a lot of interest.

Q: Would you discuss his time in Paris?

A: The Paris years were from 1952-64 While there, he became very close to artists such as Tamayo and Lam, and also with Max Ernst and Fernand Léger.

Q: Did he tell you stories about his friendship with Picasso?

A: A friend, a Venezuelan musician, introduced him to Picasso. They were greatly attracted to each other and Picasso invited him to La Californie, his studio in Cannes. Picasso was very curious about the work my father was making and wanted him to show everything he was working on, but my father didn’t want to show him everything since he knew Picasso would absorb it all.

Q: Was your father affiliated with the CoBrA artists?

A: He was close to Corneille and he met Karel Appel, but he was never part of the CoBrA group. Similar things happen at the same time in different places. What they have in common is the innocence, perhaps, painting like a child. You can see that in the Witches.

Q: He made quite a few stylistic transitions. Would you discuss those?

A: The early period was surreal, in 1943-44 and it’s a mystery how he came up with these works since he was living in Tinaquillo then, which was very isolated. But styles came back and forth, more informal, less pre-Columbian, then a geometric period, but then the figure came back. This was what he did, go back and forth.

Q: And that striking orange diptych, Genesis, with the combined male and female figure, what period is it from? You said it was a pivotal painting?

A: It’s from 1980 and we call it the New Figuration phase. After his constructivist and l’informel period, he returned to figuration from a different point of view.

Q: And when did the Witches return?

A: Those were made when he returned to Venezuela. He was very much into mythology and witchcraft and you can see him coming back to the fertility goddesses, including the figure of María Lionza, an important religious figure in Venezuela, her cult a combination of Catholicism, the African and the indigenous.

Q: And are these late figures of women also witches? There are so many series of women.

A: This series are the Curanderas, the women who heal. My father had a severe skin infection and he drew 13 of these figures just after he was released from the hospital. He was 85 and they were very big pieces, but he had assistants turning the canvases.

Q: Were there transitional stages?

A: The shifts were very drastic. As soon as he mastered something, he moved on. If he was feeling comfortable, he moved on. He always wanted to be challenged. It was part of his character.

A: He was really influenced by Picasso as a monster of creation.

• Antológica 1943-2013, a seven-decade survey of Oswaldo Vigas’s work, is a three-year travelling exhibition curated by Bélgica Rodríguez and organised by the Oswaldo Vigas Foundation. It debuted in Peru at the Museo de Arte Contemporáneo de Lima, then went to the Museo Nacional de Bellas Artes de Chile in Santiago, and was at the Museo de Arte Moderno de Bogotá (MAMBO) in Colombia from 16 July – 23 August, 2015. It will be at the Museu de Arte Contemporânea in São Paulo next spring, before going on to Mexico City. 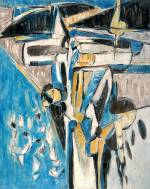 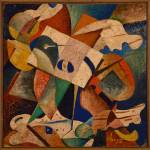 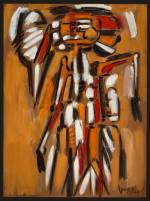 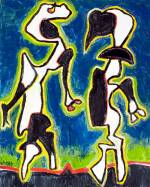 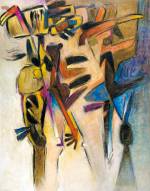 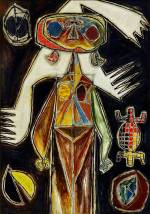