With two new luxury blocks of flats, OMA and Bjarke Ingels Group have added their architectural signatures to the Stockholm skyline. But are these apartments for the affluent really what Stockholm needs? 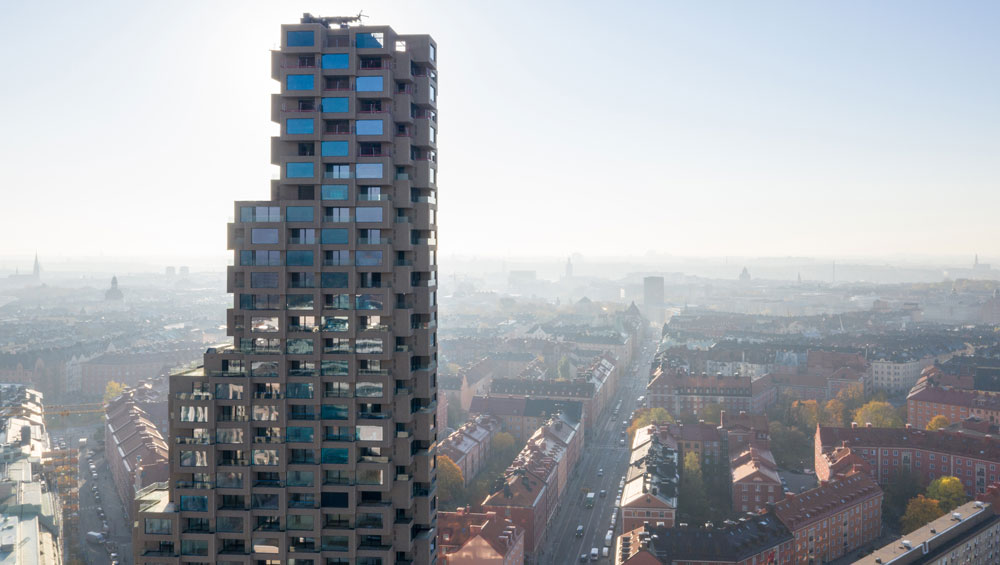 Stockholm has waited decades for a new contemporary building of note to interrupt its historic skyline – now, thanks to OMA and Bjarke Ingels, it has two, with another by Herzog & de Meuron on the way. And it is all thanks to one developer: Oscar Engelbert, CEO of Oscar Properties, who seems to be singlehandedly trying to raise the bar for the quality of accommodation in Scandinavia’s most populous (and arguably most popular) city. 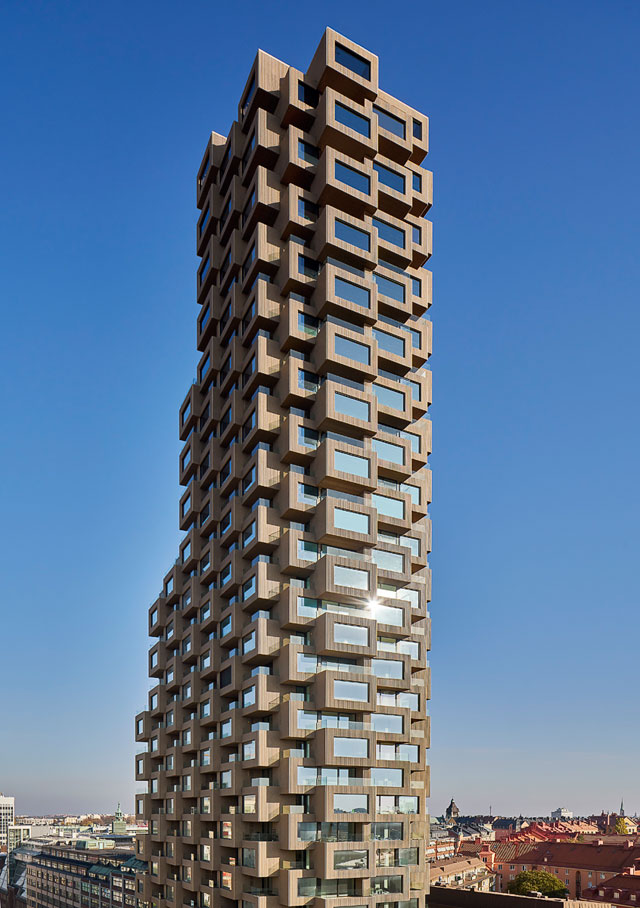 With its current population of 1.6m predicted to triple by 2045, apartment blocks - and probably tall-ish ones - are one answer to a severe housing shortage, given the city’s unique layout over a series of small and leafy islands (although it is certainly not luxury apartments such as these that are most needed). OMA’s Innovationen Tower is Stockholm’s tallest residential building yet, at 125 metres. The tallest of what will be two towers (construction on the other one, Helix, has only just started), the top floors of this first are only partially completed, but the full occupancy of its first 16 floors was celebrated this month with a major international media launch. 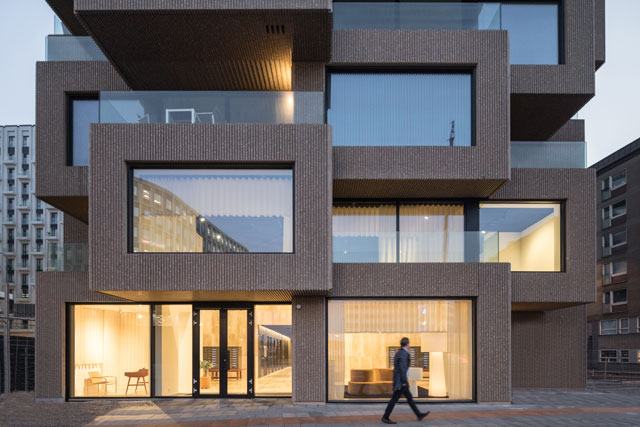 “Welcome to the best residential tower of the 21st century,” was the (only slightly tongue-in-cheek) opening line of OMA partner Reinier de Graaf, as he unveiled his project. This rugged stack of zigzagging concrete blocks is, like so many of the buildings from Rotterdam’s most starry of starchitects, an unfeasible looking thing – its glazed surfaces so sleek, its contours so chunky, that it looks like a Minecraft creation come to life. “It’s implausibly abstract,” de Graaf agrees, privately. “In terms of detailing, it looks like it’s impossible.” 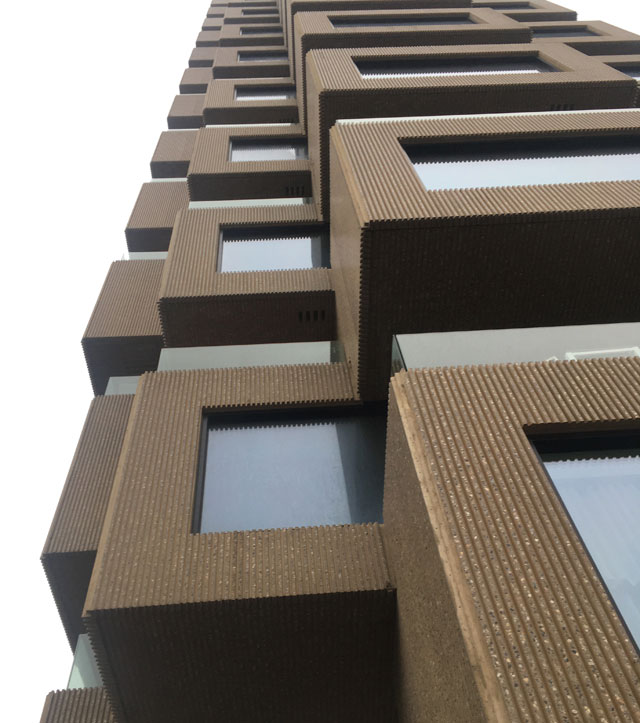 With a tight plot of just 660 sq metres and 575 sq metres, a rapid build schedule, and the need to convert what had been a planning scheme for two office towers into residential accommodation, prefabrication was the obvious solution; by slotting these concrete units tightly together, the space that would normally be taken up with the structural framework can be given over to the apartments, allowing more units to be packed in to that footprint, as well as taller ceiling heights, for example. After the first six floors of poured, in-situ concrete, the remaining 30 floors are made up of prefabricated concrete units; most of the bathrooms are also modular, slotted into place with all fixtures, fittings and surface decoration intact. The cost efficiencies and build speed of this kind of construction – with a floor added every six days - meant that OMA could be more generous with the facade. 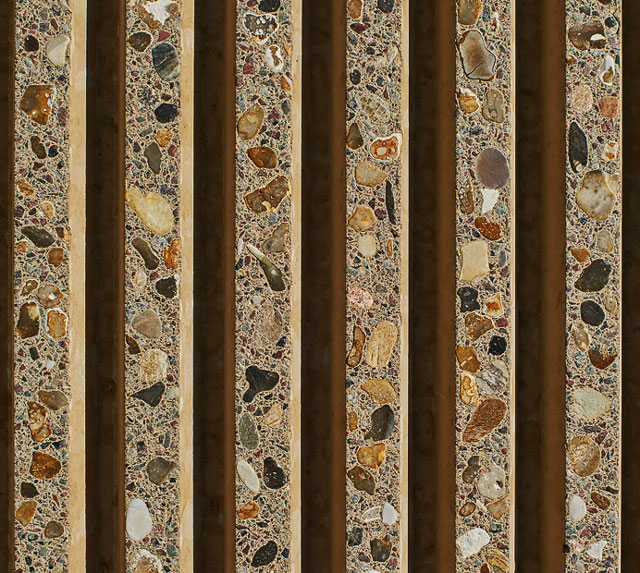 This is also made of precast concrete blocks, which have been pigmented a sandy, pale brown and filled with assorted pebbles that tone with the surrounding city’s distinctive mixture of brick and painted buildings, with their palette of ochre, pink and red. The panels have been bush-hammered to highlight the elegant aggregate and give it a more hand-finished, organic appearance. 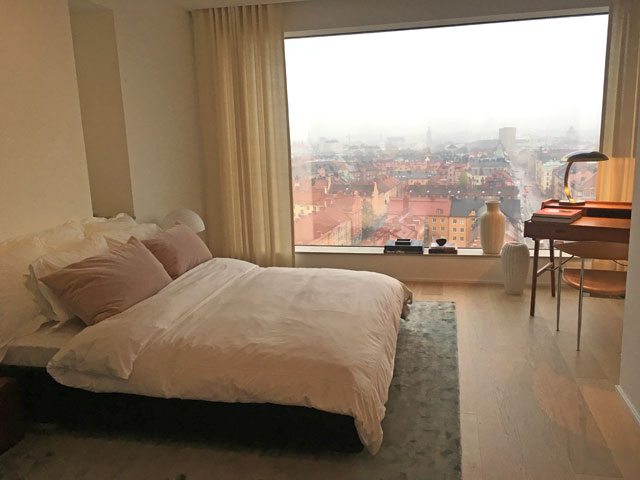 What gives the building its peculiar pixelated look is the binary pattern of in and out that characterises each layer: the sleek, full-glazing of the protruding block’s “bay window” element contrasting with the deep, glass-barriered, inset balconies. In this way, nothing interrupts the fractal simplicity of the facade’s patterning. 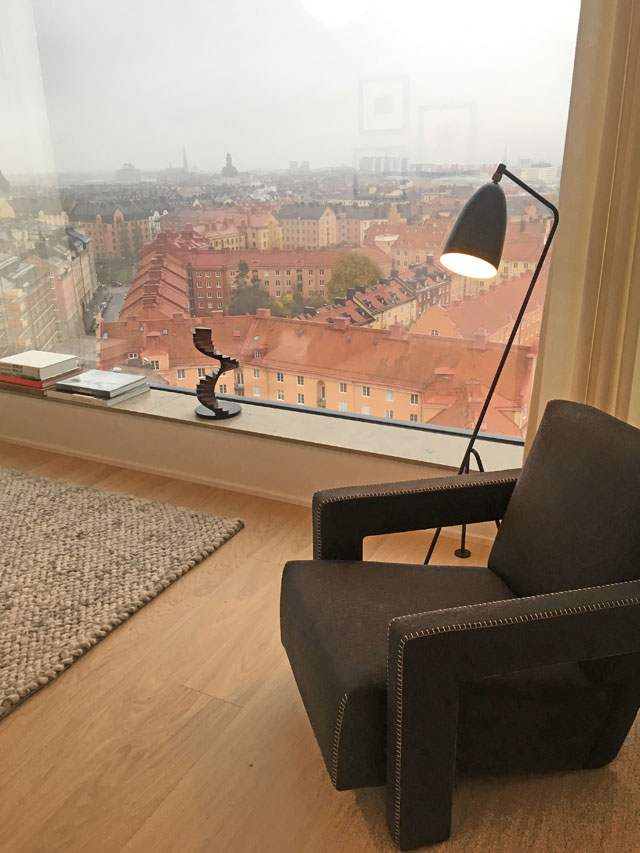 Of course, the rigour of the technical and creative processes required to deliver a scheme like this to such a high standard is far from simple, even if De Graaf describes it as “an exercise to achieve the largest amount of visual variation from a very small amount of elements”. 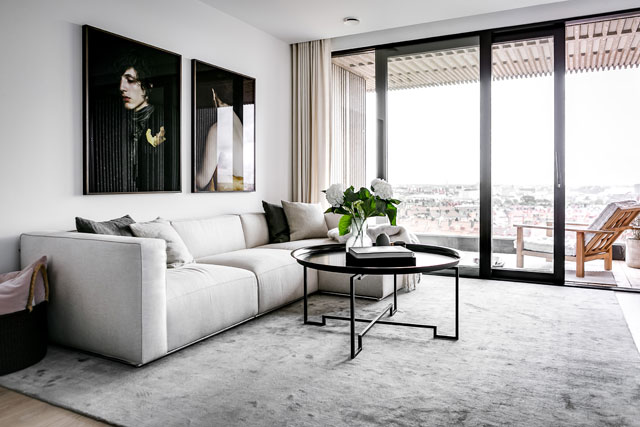 The interiors, created by Oscar Properties’ own design team, are all Scandi-luxe, with pale stone counters and natural wood floors; blankets and bedding heaped high and stunning views from every bedroom and living room. The dimensions are not exactly regal (the flats range from 44 sq metres for a one-bed flat to 271 sq metres for a two-storey penthouse), but perhaps this adds to a decidedly cosy and cave-like quality; a feeling of being hugged into the buildings - even on the balconies, where you are protected from icy winds and Nordic temperatures by their recessed position. 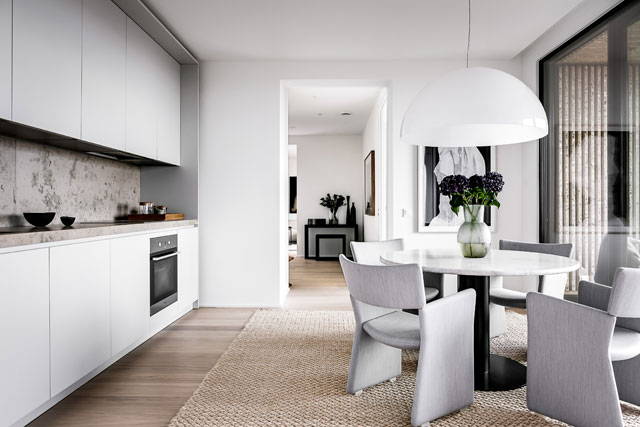 It is a really ingenious scheme, elegantly resolved; a handsome addition to the OMA global portfolio. And when the second tower, The Helix, which is slightly smaller, at 110 metres with 138 apartments (compared with the Innovationen’s 182), is finished late in 2019, these two will form a distinctive gateway between this evolving new neighbourhood, Hagastaden, and the city. 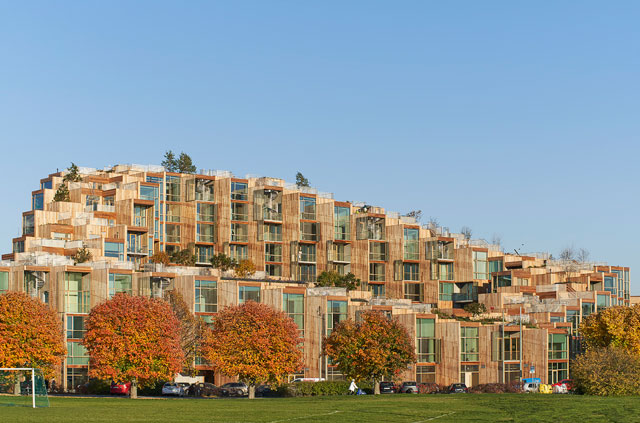 A totally different atmosphere is conjured in Bjarke Ingels Group (BIG)’s new scheme for Oscar Properties. Situated to the west of the city, right next to the extensive greenery of Gärdet park, 79&Park does its best to emulate the undulating contours and leafy aspect of the forested rocky outcrop immediately beside it. This project has been longer in gestation – Engelbert invited BIG to inject its customary quirky, nature-loving signature into this 25,000 sq metre block in 2011 (where OMA’s was a competition-winning scheme from 2013). 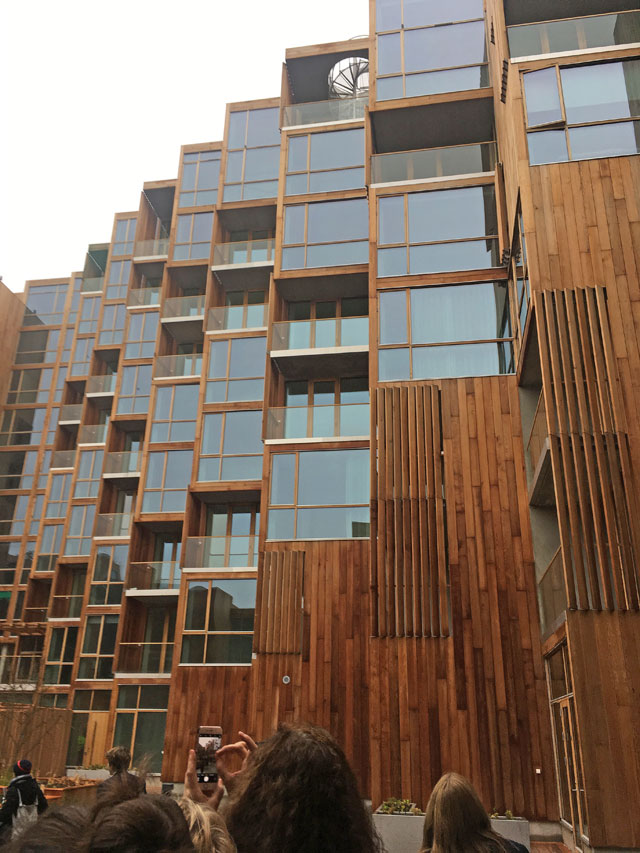 With the site’s south-west exposure to the park in mind, BIG’s team decided to follow the traditions of the Scandinavian courtyard house and keep to the square grid of the site, but allow the contours to dip low down at the park end, so that sunshine and daylight can pour into the central shared courtyard. With a multistorey office block to the north, it was logical to stack the units highest at this end, up to 35 metres, and orientate all the apartments to these park and forest views. The southern elevation is, consequently, almost entirely glazed, opening up the flats to sunlight and vistas on to the greenery around them – which includes the profusion of ready-planted roof terraces; each flat has either a balcony or roof terrace, and access to a shared roof terrace. 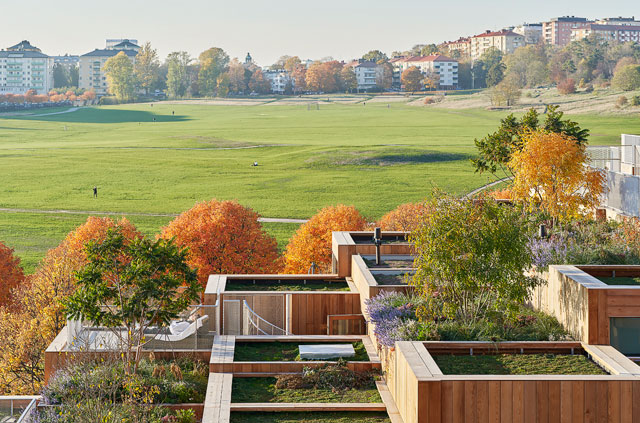 Although the 3.6 x 3.6 metre units were, like those for Norra Tornen, prefabricated, and stacked to create a similarly pixelated, albeit softer, profile, they are rotated 45 degrees in order to frame the park views while providing privacy from neighbours. Due to this kinked orientation and the stepped levels the BIG team wanted to achieve – the better to mimic the contours of the nearby rocky forest - almost every apartment has a unique interior. Ceiling levels dip and rise, with generous minimum heights of 2.7 metres, while steel structural elements are left exposed (albeit painted white) to reinforce that sense of character. Full height, timber-framed windows look on to Gärdet park, the roof terraces, or into the wood and glass facades around the courtyard. 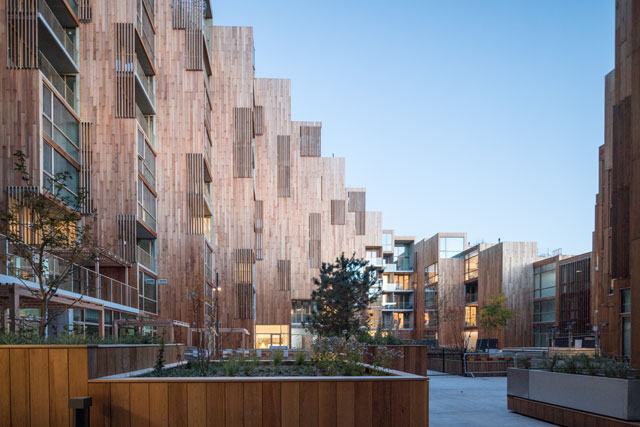 This sense of an inhabited forest is sealed with a finishing flourish of cedar cladding for the entire building envelope. Currently a warm, reddish tone, it will fade to grey – complementing the cement Filmhuset by Sweden’s leading brutalist architect of the mid-20th century, Peter Celsing, which is clearly visible across the adjacent parkland. As an admirer of his, Bjarke Ingels was thrilled to have his building “bookending” the park with Celsing’s.

However, there is a slightly messy, unresolved quality to this structure – certainly compared with the leafy ebullience yet precision of BIG’s 8 House or The Mountain. One local insider quipped: “It looks like they ran out of money.” And Ingels himself admits to the project’s having flaws: “One of the challenges of a multifamily (block), where everyone has a balcony (means) there’s a rhythm of openings, and it’s hard to make a sculptural statement.” 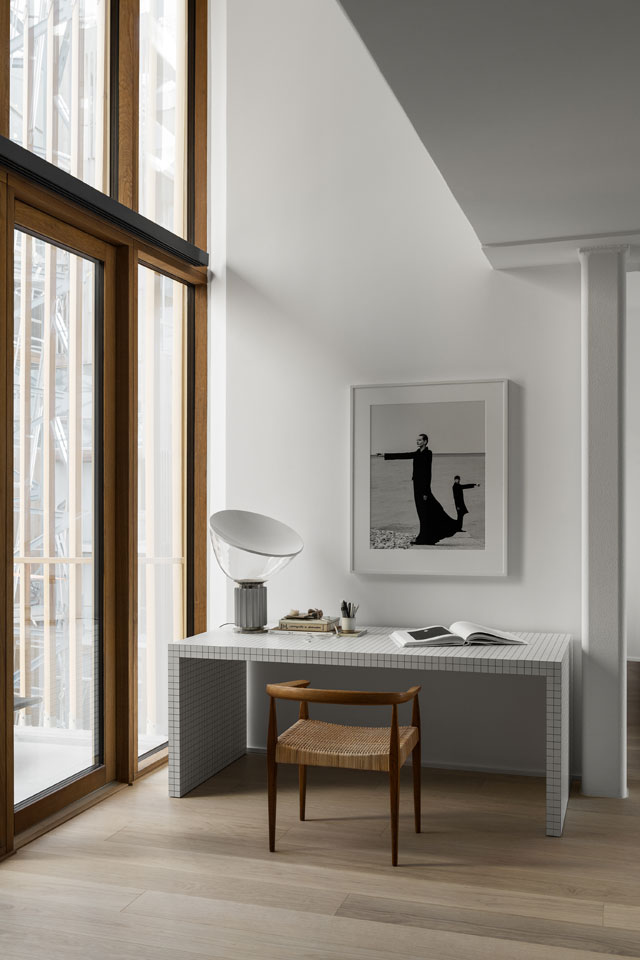 Any Swede lucky enough to be able to afford an apartment in either of these buildings would be pleased; prices range from €400,000 [£354,000] for the smallest one-bed flat in the OMA tower (with 79&Park only slightly cheaper) to more than €6m for an OMA penthouse. With tensions in the city running high at the lack of affordable housing, and the Swedish government edging deeper into political crisis after an inconclusive election in September, celebrations will probably be kept low-key at the completion of these new arrivals. The Herzog & de Meuron scheme – a 90 metre tower called the Gaslockan, built in the footprint of a 1930s gas tower – is scheduled for 2022 occupancy, and will be even more luxurious, with prices starting at nearer €500,000 for the smallest unit. 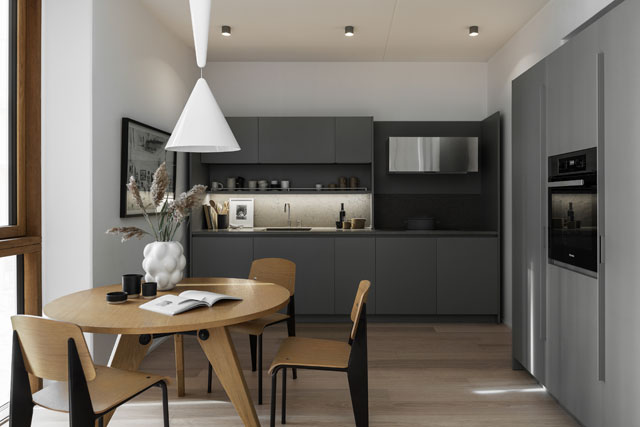 However, local publisher and architecture critic Mark Isitt felt that these two towers set a useful precedent. Although Spanish starchitect Rafael Moneo built a new gallery and HQ for Stockholm’s modern art museum (Moderna Museet) in 2001, the original proposal for a grey exterior and protruding chimney stacks was apparently completely revised thanks to the prevailing mood of architectural conservatism in Stockholm; it is barely visible as a new building, next to the historic structures on Skeppsholmen island (and had to be closed for years, shortly after its opening, when it started sprouting mould). So Isitt is right, perhaps, when he says: “Nothing has been built in Stockholm of any quality (since) 1985 when the Globe Arena was being built. There is a whole generation of architects that are not visible on the skyline at all.” The new buildings in Stockholm by OMA and BIG, he said, are “two buildings going up of quality. From an architectural point of view, I’m very enthusiastic.” 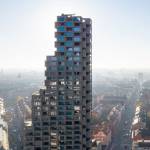 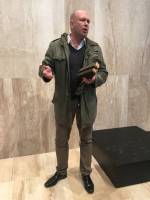 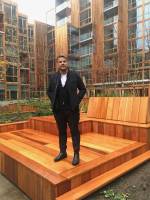