The sculptor Raymond Mason has died, aged 87, on 13 February in Paris, where he had worked for 64 years although his first London exhibition took place at Helen Lessore’s Beaux Arts Gallery in 1954.

He had early been a friend, and something of a protégé, of Henry Moore, who tried to persuade him to return to England, saying that “we have here a fine little team of up-and-coming sculptors”, by whom he meant Butler, Chadwick, Armitage, Paolozzi and Turnbull. But Mason’s mind was already made up; indeed as a sculptor he felt a greater affinity to Giacometti. Mason had early in his career followed an honoured course, with scholarships initially to his local Birmingham College of Arts, and then to the Royal College of Art, and later to the Slade, followed by a further scholarship to the École des Beaux Arts in Paris (after war service in the Royal Navy, from which he was invalided out in 1942). Mason’s father had been a Scottish motor mechanic and a taxi driver in Birmingham, his mother English. When she died in 1958 he returned briefly to Birmingham and painted the celebrated Birmingham in Memoriam.

Returning to Paris, his sculpture took an original direction, whereby he framed reliefs like pictures. These were set around the Rue Monsieur Le Prince, where he lived and worked, and other locations nearby such as the Boulevard Saint Germain, these sculptures proliferated in Parisian places. His work related usually to particular community events, such as the removal of the Fruit and Vegetable Market at Les Halles away from the centre (The Departure of Fruit and Vegetables from the Heart of Paris, 28 February 1969, (1969–1972)). His sculptures, he said, “were vehicles for human thought”. An earlier installation had been Forward (1991), in Centenary Square Birmingham, his home city, an essentially people’s celebration. He spent much time also in Provence, where he was inspired to create The Grape Pickers (1982). There were also more sombre scenes such as The Aggression in Rue Monsieur le Prince (1975), which depicted a murder scene opposite to his studio. North: Winter, Rain, Tears (1975–77) showed the aftermath of a mining tragedy in the town of Lievin. He was more recently deeply upset by the 9/11 catastrophe of the World Trade Centre in New York and the massive loss of life which occurred: this led to one of his most celebrated works. There were crowded days at his major retrospective both for the Serpentine Gallery, London, and the Centre Georges Pompidou, Paris. Since 1983 he has been represented by the Marlborough Gallery, London and New York.

It can be said that France’s gain of Raymond Mason was Britain’s loss. Nor was much done, apart from Moore’s initial urging, to get him to return. He was obviously seen by the British Council to be beyond their remit, and his network was almost exclusively both French and cosmopolitan. He had a rare intellectual enquiry, and was essentially a man of the people. In addition he came to seem more French than English. But one of his last visits to Britain was to Eduardo Paolozzi’s opening at the National Gallery of Modern Art’s Dean Gallery in Edinburgh, to see again his old friend, then failing. He was taken with Scotland and Edinburgh too, and as he himself says in his book At Work in Paris (Thames and Hudson 2003) he never had any problem with whisky, matching Francis Bacon in capacity on occasion. Raymond Mason had a particularly engaging and convivial sensibility. He will be sadly missed by his friends, of a distinguished fraternity, as well as simply his wide circle of copains. A major Retrospective of Raymond Mason’s work will be held at the Musée d’Art Moderne in the autumn. Raymond Greig Mason (born 2 March 1922) is survived by his second wife, Janine Hao and three stepdaughters.

He was awarded an OBE in 2002 and Chevalier, later Officier de l'Ordre des Arts et Lettres in l978. 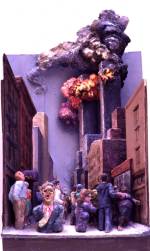