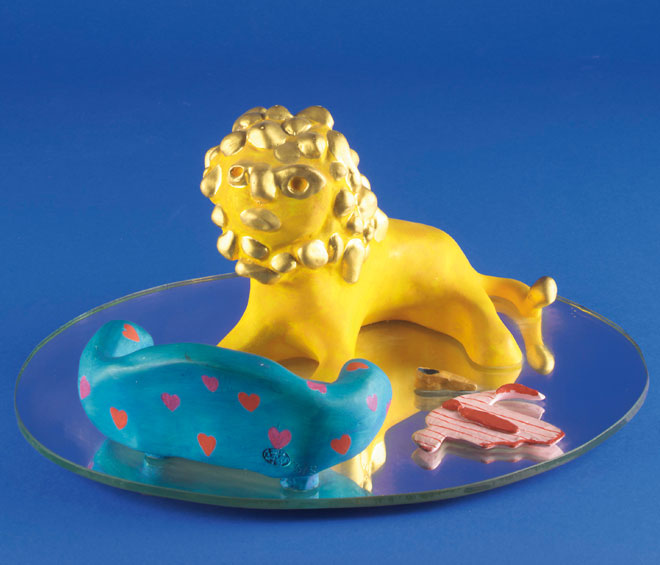 At first sight, Omer Tiroche Contemporary Art is filled with a menagerie of joyful, celebratory and colourful works: gouache paintings and crayon drawings; sculptures and reliefs studded with coloured glass mosaic; ornate mirrors and intricate yet simple jewellery – all infused with a sense of playfulness and naivety, like that of a child. But look more closely and there is more to the works on display than meets the eye: a gorilla with a gaping hole where his internal organs – including his heart – should be; serpents; skulls; and a satisfied lion, recently having feasted on a man, whose shirt and shoes lay abandoned by the miniature settee. Catherine Marie-Agnès Fal de Saint Phalle, or Niki de Saint Phalle (1930-2002) as she became known, had a traumatic early life, which later unavoidably fed into her artwork, making it more worldy-wise and complex than it might at first seem.

Born in France to a wealthy banker, Count André-Marie Fal de Saint Phalle, and an American mother, Saint Phalle initially lived with her grandparents and spent summers in the family’s castle. Soon, however, the family moved to the US, where Saint Phalle was enrolled at the prestigious Brearley School in New York City. Her time there was short, as she was dismissed for painting red fig leaves on the school’s statuary – a sign of the burgeoning artist’s mischievous charisma. At the age of 11, however, Saint Phalle was raped by her father, and this abuse, followed by an elopement and unsatisfactory, bourgeois marriage, forcing her into the role of young wife and mother, while barely an adult herself, led to her suffering a breakdown at the age of 23. She was treated with electroshock therapy and insulin and diagnosed with schizophrenia. During her therapy, however, Saint Phalle was encouraged to paint – and thus the artist was fully born.

Saint Phalle is best known for her Tirs (or Shooting Paintings) series, which gained her international recognition in the early 60s and were created by firing a gun at complex assemblages of white primed canvas and bags of paint, which would burst and spill and splatter on impact. In 1964, she turned her attention to traditional depictions of women in society and began creating her so-called “Nanas” (which roughly translates as “broad”): life-size models of female archetypes – including women giving birth or in wedding dresses – from plaster, wire and plastic toys. This exhibition, however, which, by dint of being held in a commercial gallery in Mayfair, necessarily can only showcase smaller scale works, looks away from these better-known series and focuses instead on some of Saint Phalle’s repeated themes and motifs: serpents, obelisks, hearts, animals, skulls and flowers. Curated by Helen Pheby of Yorkshire Sculpture Park, it brings together many works that have not previously been seen in public.

Unsurprisingly, Pheby was keen to include a reference to the monumental, three-metre-tall sculpture, Buddha (2000), which sits in the northern sculpture park. It is represented by a photograph on the gallery wall, itself as large as wall height will permit, but, nevertheless, an unnecessary and failed idea, since nothing of the scale and grandeur of this piece is carried over, and the detail and intense colours of the “M&Ms” (Saint Phalle’s term for the embedded pieces of glass, mirror, ceramic tile and polished stones) are also lost. Luckily, however, there is enough other wonderful work on display to make up for this error of judgment.

The exhibition opens with a far less easily recognisable Saint Phalle piece, All Over (1959-60), one of the first works she made as an artist after her breakdown. A wooden panel, covered in plaster and embedded with collaged fragments and broken, everyday found objects – pegs, wooden spoons, lids, shattered crockery – the work is like a burial ground for all that went before, a river bed once the tide has gone out, inviting viewers to scan, collate and reassemble the shards. The work, however, looks forwards not backwards, and Saint Phalle once said: “My early paintings contain many of the ideas I have spent the rest of my life working on.” As with many of her works from this period, there is an overriding optimism – a suggestion that creativity can emerge from destruction.

The various sketches and maquettes of animals – simple shapes, filled with patterns and colours of an almost oriental flavour – are studies for Noah’s Ark, a collaborative sculpture park with Swiss architect Mario Botta at the Jerusalem Biblical Zoo. Similarly, Mask (undated), a drawing of what might appear to be a Chinese dragon, is actually a sketch for a slide (also in Jerusalem). Saint Phalle loved to see children enjoy themselves and interact with her works. Their energy and enthusiasm matches the hopeful vibe with which she seeks to infuse her art, the innocence of which she herself was robbed.

Yet there is, as already noted, an unsettling undertone of revenge: the lion who has devoured the man sits on a mirror, so that when we look down at the crime scene, we see ourselves reflected and become implicit in the deed. The serpents suggest sin and their interchanging and interweaving with phallic obelisks positions this evil, contrary to the story of Adam and Eve, ambiguously with both the male and female. In Vase au Serpent (1973), two heads come together in what could be either a kiss or a bite. They share one body and together form a chalice – is there some potential for redemption after all? Whatever, across all of Saint Phalle’s works, there is a tension between the playful and the serious; eternal youth and memento mori; the childlike and the wise.

Another common motif for Saint Phalle was that of the bird, and the words used in a delicately beautiful brooch and necklace set, You Are My Bird (1973-2014), are taken from a love letter she wrote to her second husband, the Swiss metal sculptor, Jean Tinguely, whom she met in 1955 and described as “the person I was destined to meet”. She also wrote many imaginary letters to her friends, never intended to be posted, in which she relates her feelings, dreams and stories from her life. Many of these letters were illustrated. Happy Easter (1979) – addressed to “Gerhard” – is one such enchanting example. A further work on paper is the collage Le Sida ça s’évite (undated), part of a series of works dedicated to the Aids awareness cause, in which Saint Phalle believed and was fully active. In 1986, for example, she published Aids, You Can't Catch it Holding Hands, an amalgamation of written word and illustration.

And that just about sums up Saint Phalle. Although – or perhaps because – she came from a dark place herself, she decisively used her art to create positivity, exuberance and joy: be it for a cause she believed in, children in a park, or lovers and friends. Scratch the surface and the warnings and reminders are there, but always with a positive future outlook. 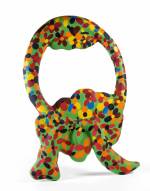 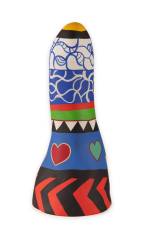