Nick Relph: Tomorrow There Is No Recording

Nick Relph: Tomorrow There Is No Recording

This solo exhibition marks a departure from Nick Relph’s 10-year collaboration with Oliver Payne. Relph is already known for his interest in the material and social effects of textiles: his film Thre Stryppis Quhite Upon ane Blak Field (2010), for example – presented at the Venice Biennial 2011 and recently on display at Tate St Ives – connected the meandering history of tartan with the Japanese fashion label Comme des Garçons and the artist Ellsworth Kelly.

Stepping into this installation of new work at the Chisenhale Gallery, we see the fabric of this idea extended and reimagined. Using a four-harness floor loom, Relph has fabricated a series of weaves using polyester, rayon, silk, monofilament, latex and paper. Here, surface and its woven construction manifest themselves through laborious handmade craft rather than the digital assistance and precision of film. The intentionality of Ralph’s investigations into surface are similarly seen with Kelly, challenging us to consider the voluminous sculptural qualities of canvas and its surface.

In the entrance lobby for Tomorrow There Is No Recording, large framed photographs are hung so that they overlay the wall text with bullish confidence, suggesting a playful disregard for convention, prankish rebellion. Depicting cracked windows and close-up abstractions of domestic objects, these works originated as slide and 35mm film taken by Relph 10 years ago. Resurrected as reworked digital reincarnations, the strangely beautiful degraded quality exposes the same exploration of analogue processes seen in the weaving. He uses traditional methods with hi-tech fabrics, although it is not the status or value of the materials that he is interested in, but rather he wants us to examine the surface created.

Relph confidently moves from the certainty of film to the uncertainty of the floor loom, which took over his studio for the summer. He began not knowing what he was going to create, and this led him to experiment with different materials such as wig hair and coated cottons, high-fashion fabrics up against traditional organic ones.  There is no history to the material used in these works, they are not anthropological or veils of beauty referencing a time gone past. Instead, we encounter neat rectangular shapes stretched and flattened out on frames that conceal the frayed edges of the fabric. Every moment of the process is starkly visible, nothing on the surface can be concealed from scrutiny.

Densely intricate weavings are each given generous breathing space in the large industrial space of the Chisenhale Gallery. The installation of woven works and photographs are modest in scale but intense with detail, refusing reflection with a stubborn confidence, like a buttoned-up suit and tails flaunting stature, no creases or fraying or protruding loose ends. We can’t see past the textured flatness of surface, void of representation, rather like experiencing one of Gerhard Richter’s Grey Paintings.

Relph is concerned with how we look at image and projection: he can’t think about projection without thinking about the material it is projected on to, the two intimately connected. The photographs are rather like paintings, a composition of abstracted digital prints, sourced using Google archives, of flattened 19th-century weave books, scanned swatches of textile. The action of clipping, scanning, downloading and printing are for Relph the same as the forward and backward movement, the push and pull, of weaving. Collating and dismantling archive content is reminiscent of Elizabeth Price’s 2012 Turner-prize winning THE WOOLWORTHS CHOIR OF 1979, composed to question the format, function and amalgamation of film and sound.

These weaves are defiantly images rather than woven objects, as if they are freshly pressed and dressed up, ready to go out for a party with the top button done up. The heavily laboured content of this show offers a delicate aesthetic and rather majestic quality to be encountered by all who visit. 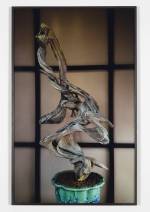 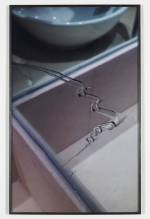 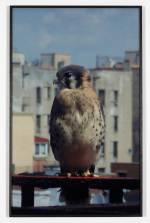 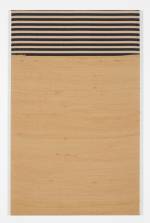 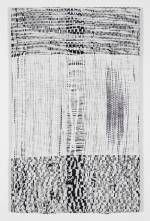 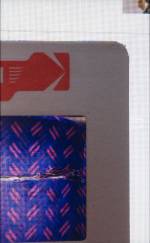