Mikhailov’s Russia: From Eden to Hell

Mikhailov’s Russia: From Eden to Hell

Boris Mikhailov is perhaps the most prominent photographer to emerge from the former Soviet Union in the past 20 years. Engineer by training, artist by profession; Russian by name, Ukrainian by birth, Jewish by nationality; splitting his time between a new home in Berlin and an apartment in his native Kharkov – in his uncertain existence, Mikhailov exemplifies in many ways the plight of an itinerant intellectual from the former USSR.

While his identity and locality are in constant flux, his photographs, on the contrary, are irreproachably lucid and precise. Dominique Lévy Gallery on the Upper East Side of Manhattan is showing four of his signature photographic series. Covering the years from 1968 until 1993, these pictorial cycles – Yesterday’s Sandwich, Crimean Snobbism, At Dusk and The Green Series – trace the states of private and public life in the Soviet Union during its stable period and after its disintegration. With the exception of the famous Case History, in which Mikhailov took shocking images of the homeless population of Kharkov in the wake of the collapse of the Soviet Union, the exhibition contains major projects that in many ways define the artist’s career.

Mikhailov began taking photographs in the 60s, and Yesterday’s Sandwich, which he often calls “The Red Series”, was his first experimental undertaking. The exhibition features one image from this group – a large print of a naked boy in profile, forlornly casting his eyes downwards, toward his penis. The composition is open and uncluttered; there are only a few items placed next to the boy – a chair, two inflated balloons and a red patch of uncertain provenance in the centre of the composition. On a closer look at the patch and the balloons attached to it, we notice that it may be part of another image superimposed on the first one. Unlike the boy and the chair – the rather typical and mundane sights – the patch and the balloons are unusual. The red smear is an abstraction and the two phallic protrusions are in the process of becoming abstract – each is split into two, resulting in doubles resembling transparent halos hovering above the vertically extended shapes. This playful interjection offers only vague shapes and patches of colour and suggests uncertain allusions, but in combination with the representational nature of the basic image, it changes the meaning of the work. Instead of a rather ordinary, perhaps even slightly vulgar figure and objects, the added elements make the photograph into a lyrical reflection on life, sexuality and approaching adolescence. For Mikhailov, this series was precisely about the creation of beauty, because, he said: “Beauty was the essential element in our [Soviet] society.”1 Only instead of the typical Socialist realist “model for beauty” as “the fusion of a positive image with formal harmony”, Mikhailov proposed an alternate model of a sexually ambiguous image of anxious adolescence combined with an abstracted symbol for beauty in Russia, the colour red. As he recently explained, his turn to montage and an alternate, “unreal” aesthetics was influenced by advanced Soviet cinematography, particularly the work of Andrei Tarkovsky and Sergei Parajanov.2

The cinematic inspiration of Mikhailov’s work is particularly evident in his practice of making photographic “series”. Applied successfully in Yesterday’s Sandwich, this serial mode of production continues to this day, changing its emphasis according to a particular project. While in Yesterday’s Sandwich, Mikhailov was interested in formal devices and juxtapositions, in Crimean Snobbism, another series from his Soviet period on view at Dominique Lévy, he borrows theatricality and narrative function from cinema. The pictures of this cycle, represented in the gallery by a complete set of 55 images, tell a happy tale of an Eden-like existence of a group of frolicking intelligentsia in Crimea, a Soviet holiday destination. We see the artist himself and his friends relaxing on the beach, playing games and otherwise amusing themselves in various states of dress and undress while away from the grind of workaday existence. Prominent here are the images of Vita, Mikhailov’s wife, ravishing and drop-dead gorgeous in her floating white dress and wide-brimmed hat. In this series, for the first time in his career, Mikhailov turned the camera’s lens towards himself. Happy, married and in love, the artist was generous with creating and sharing the scenes of his bliss amid the magnificent scenery of the Crimean peninsula. According to him, playfulness and exuberance of Crimean Snobbism “dissolved a certain tension”: not only was it a record of a turning point in his personal life, but it was also a mindful game intended to display the unevenness and contradictory nature of Soviet reality. These images proved that in a supposedly classless society that lived according to the doctrine privileging a hegemonic working class, there was a distinct and legitimate class of people who could be considered carefree loafers, in their enjoyment of sex, play, beauty and leisure. Mikhailov claims to be the first photographer to have registered this aspect of life and to have made it into “art”.3

While the third floor of the gallery is devoted to depicting a relatively tranquil Soviet period, with a heightened sense of aesthetics and the exploration of beauty in its various guises, the second floor, displaying photographs taken after the dissolution of the Soviet Union, confronts us with scenes of desperation, abandonment and hunger. The four images from The Green Series, taken in 1991-93, and 68 from At Dusk or The Blue Series, from 1993-2000, are about people who are lost, injured and angry. In the hand-coloured triptych from The Green Series, we see abandoned machinery in the countryside. A mighty Russian woman, wearing only a bra, attempts to move this mound of useless steel covered with rust, but fails. A lonely man’s figure, partially cut by the picture frame, stands on the overgrown country road leading to nowhere. The slightly skewed perspective contributes to the sense of imbalance and disequilibrium. Mikhailov describes the atmosphere in which he created these works as follows: “Suddenly, the 1990s had begun … Things were beginning to fall apart. The country was breaking up. Everything became disorganised. And life began to collapse. On the visual level, it meant that the streets were swamped with poverty.”4 While The Green Series focused on the disintegration of the countryside, The Blue Series documented a similar entropic process in the city. For Mikhailov, the colour blue is symbolic of war. The images, accordingly, convey a war-like atmosphere of scarcity, destruction and imminent death.

Although he has lived in Berlin for more than a decade, Mikhailov remains faithful to his troubled homeland as a kind of an anthropological wonder. He and his wife still have an apartment in Kharkov and go back on a regular basis to stay in touch with his countrymen. As an ex-Soviet citizen born shortly before the second world war, he made peace with the former “enemy”, because he realised that it had won the war of civilized existence. The melancholy tone of a man who lost his homeland haunts his work (the series If I Were a German, for example) and his statements, which offer an apologia of sorts for his retreat: “There was Rodchenko at the start of the Soviet system, and then I came along at the end. The end of the Soviet system was linked to a feeling of decomposition, of collapse. Which goes along with my mental attitude, an increasingly unhealthy way of looking at life … The country has not changed just because of me. It took a lot of different decisions to change things.”5 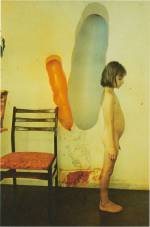 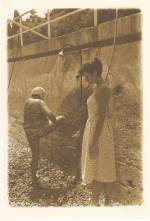 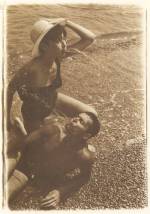 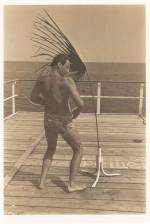 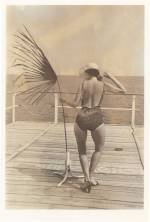