From austere family portraits of the 1860s to Rodchenko’s Stalinist propaganda posters and the subversive underground images of the 1960s and 70s, this elegant Photographers’ Gallery exhibition takes us through a century of Russia’s history

Primrose: Early Colour Photography in Russia tells the story not only of colour photography, but also of Russia and its people in a time of unprecedented change. It is a tale of compliance and subversion, of revolution and rebellion spanning more than 100 years from the 1860s to 1980s.

Primroses are symbolic in Russia, bringing the first colour of spring. “It’s like the sun arriving from the Earth,” says curator Olga Sviblova. The arrival of colour in a monochrome landscape is a suitably poetic sentiment for an elegant exhibition such as this. The earliest colour photographs on display are tinted, some delicately so. Others more closely resemble paintings, the photograph beneath masked by a thick layer of paint. The initial focus was the family portrait, a formal and austere affair, where all concerned donned their Sunday best and sat stiffly while the photographer set about the complicated task of capturing the image. Soon the focus turned to the environment and more relaxed images of people in fancy dress or on country walks. Some of the early landscapes on display, timidly and sympathetically coloured, are bound to stir up nostalgia in this digital age where the human touch is largely absent from the finished product. These early images are full of charm, bridging the gap between painting and photography, their genteel observances in sharp contrast to the striking but unyielding constructivist montages of post-revolution Russia.

After the 1917 revolution, the varied tones favoured by the early photographers were replaced with the uncompromising blood red of communism. Under the new regime, art was expected to serve society and reinforce the Marxist ideology by actively improving the lives of the revolutionary proletariat through its utilitarian applications. In short, art that served no purpose was viewed unfavourably and artists were expected to turn their attention to architecture, the design of household objects and print media. The revolution had been largely supported by Russia’s avant garde, and a prominent group of artists embraced the iconoclastic tendencies of constructivism with zeal.

Aleksandr Rodchenko (1891-1956) was one of the movement’s most vehement proponents. His dynamic black-and-red photomontages, celebrating the defining tenets of communism, are a dominant presence in the second room of this exhibition, signifying the dawn of a brave new world. Rodchenko’s bold propaganda posters helped to spread the Bolshevik message throughout a largely illiterate nation; however, he eventually became disillusioned with the idea of a Soviet utopia. In 1937, in an act of artistic rebellion against Stalin’s now suffocating grip on the arts, he turned his attention to the heavily suppressed art of pictorialism. He photographed ballets, operas and sports, although elements of the constructivist aesthetic lingered in his soft-focus portraits, displayed in this exhibition alongside his early work.

Stalin’s crackdown on artistic movements meant that only one form of art was tolerated under his regime. Socialist realism became the only acceptable mode of expression. Seen as a more accessible visual language than modernism, and less of a threat to the communist philosophy than the romantic nostalgia of pictorialism, it was considered better suited to perpetuate the myth of a happy people living as part of a flourishing nation. It wasn’t until his death in 1953 that artistic repression was relaxed in Russia.

Most numerous in this exhibition are the photographs of Dmitri Baltermants (1912-90), a Polish-born photographer best known for his haunting black-and-white photographs of the second world war. A different side of his work is on display here, however, which celebrates the newfound freedoms of a post-Stalinist Russia. These are joyous, sunny images with a holiday feel to them. However, accents of red still punctuate these faded photographs – a red flag curling in the breeze, red hats in a shop window, the red handbag of a smiling woman under a blue sky. It wasn’t until cheap photographic equipment became readily available in the 1960s and 70s that photographers, amateur and professional, could represent the reality of their daily lives, albeit in secret.

Ukrainian-born Boris Mikhailov (b1938) set out to do just that. His series of slides, entitled Suzi Et Cetera (1960s-1970s), are digitally reproduced in this exhibition, but efforts have been made to recreate the original experience of viewing them as they would have been seen in the underground clubs of the artist’s friends. Such radical images of everyday life were, after all, banned from public display. Here, they are housed in a small, dark room, accompanied by the clicking sound of a slide machine. These photographs provide a complete departure from what had gone before. Personalities shine through and the individual is placed centre stage. Unapologetically naked bodies reveal themselves in the bleak, beige environments of Soviet Russia. Playful, surreal and sometimes shocking, these images are strangely captivating. This is subversive art on an intimate, human scale.

Sadly, there is no catalogue to accompany this exhibition; it would have made a beautiful and elucidating book. Throughout, though, there is plenty of information to satisfy those who hunger after the technological jargon of photographic processes, not to mention those with a keen interest in Russian history. But on a purely artistic level, these photographs, in all their polychrome splendour, are infinitely pleasing. Even the early portraits of proud young soldiers, which have been crudely coloured in, are touching for the story they tell. This exhibition also serves as a reminder of the power and influence exerted by images. Why else would art be so heavily censored in the USSR – and indeed throughout history – if not for its ability to influence the masses? This exhibition stops short of drawing direct comparisons to modern Russia, but there is certainly a huge, multicoloured elephant in the room. 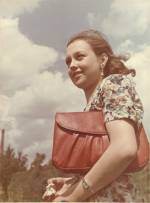 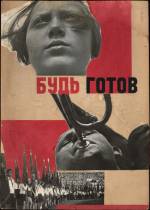 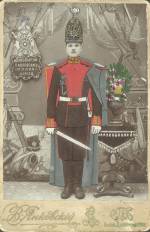 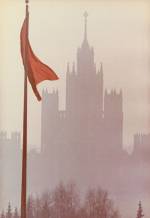 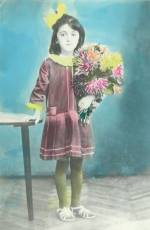 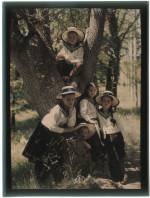