The Eli and Edythe Broad Art Museum at Michigan State University, designed by the innovative and often controversial architect Zaha Hadid, opened in November 2012. The soaring glass, steel and concrete building hovers like a luminous spaceship in the heart of East Lansing, impossible to overlook.

Michael Rush arrived at MSU in late 2010 and, as the museum’s founding director, oversaw the completion of the project. An esteemed curator, as well as a widely published author and critic, his area of specialisation is new media although he is an expert in a wide range of subjects and disciplines. His latest book, David Hockney, will be published by Phaidon Press. Co-founder of the Contemporary Art Museum Directors Association, Rush previously served as founding director of the Palm Beach Institute of Contemporary Art from 2000-04, and as director of the Rose Art Museum at Brandeis University from 2005-09. He was widely praised for his leadership following Brandeis’s highly publicised and much criticised attempt to sell the Rose’s collection and close the museum. He hosts an internet radio programme, Rush Interactive, on Art International Radio, and since the early 90s has contributed regularly to numerous publications, including Art in America, Art on Paper, the New York Times, artextandBookforum. Before working in the museum world, Rush was an experimental theatre artist. He has a doctorate from Harvard University.

Lilly Wei talked to Rush in New York about his goals for the Eli and Edythe Broad Art Museum, and what he believes the role of a contemporary art museum should be. The following is an edited excerpt from that conversation.

Lilly Wei: What prompted the decision to build the Broad Art Museum?

Michael Rush: The Kresge Art Museum needed to be expanded since it was very small and the collection had grown to more than 7,500 objects, mostly paintings and drawings. Long story short, Eli Broad [financier, art collector, philanthropist and Michigan State University alumnus] was brought in, but he was not interested in adding an extension to the Kresge. However, he said he would help to finance a new museum. I think of the new museum as the convergence of two very strong visions. Both the president of MSU, Lou Anna K Simon, and Eli Broad have very ambitious, very global views, and the museum was the result of their synergy.

MR: Yes and, to be honest, I didn’t know that much about the university, but I was impressed with the plans for the museum and the people involved in it. I attended construction meetings every day and Zaha Hadid sent two representatives to be on site one week per month at least, to go over budgets that had gone from $28m (£16.7m) to $45m (£28.5m). All the components were made specifically for the museum, the glass imported from Germany, the concrete from New York. I recall a line of 76 trucks coming down the highway bringing materials to the site. I had to postpone the opening once it was obvious it wasn’t going to be finished in time, but a delay is normal.

LW: And how much of the structure is allocated to exhibitions?

MR: The Broads wanted the museum to have around 70% dedicated to exhibition space, so we don’t have a restaurant, an auditorium and other amenities like that. Despite appearances to the contrary, we do have plenty of 90-degree walls to hang on, but convex surfaces are interesting to curators and artists. When you have a building like this, you can’t fight it. You have to work with it. It may look extraterrestrial on the outside but, inside, it reflects Futurist and other early-20th-century architectural ideas. It has a great sense of dynamism. You aren’t walking into a quiet shrine to the history of art – which is a wonderful thing, but not what this museum is about. Hopefully, the art – video, film, photography, installation, interactive digital works, performance, painting, sculpture, and on and on – reflects what this museum is, a dynamic community centre focused on the global art of our time.

LW: It has been remarked that the choice of a Baghdad-born, London-based architect to build a museum located in the American heartland seemed curious, especially since her work is considered so radical. And, also curiously, the only other major structure she has built in this country so far is Cincinnati’s Contemporary Arts Centre, in 2003. It seems the Midwest is less conservative than New York, at least in terms of Hadid’s architecture.

MR: I’ve learned how global and forward-thinking MSU is, with a presence in almost every country. We want to be the cultural arm of that global mission. The museum’s first exhibition had artists from 30 countries, with five sites on screens from around the world interacting with each other during the opening, and it’s been like that ever since. We certainly show American and regional artists, but our mission is to present cultural production from a global perspective. We have a globally minded philanthropist and a university with a global mission, so an architect with an international profile is consistent with that. It’s clear the museum needs to be similarly directed, navigating the same waters.

LW: How is that international engagement reflected?

MR: One of the first things I did as director was to hire Wang Chunchen, from the CAFA Art Museum (Central Academy of Fine Arts) in Beijing, as an adjunct curator. He is organising a major exhibition of contemporary Chinese artists for the autumn. In a student body of about 50,000, the Chinese make up the largest foreign population, while the Koreans are second, so Asian culture is obviously something we want to address. We are also inviting guest curators from all parts of the world to work with us.

LW: And how has the building worked out so far? I was struck by how well the exhibition spaces served the artists when I visited recently – Jessica Jackson Hutchins, Lebbeus Woods, Margaret Evangeline, Michelle Handelman, Shinique Smith, Sharon Hayes. Each gallery was distinct, discrete, the dimensions larger and more open where Hutchins and Woods are installed, boutique-like in other instances.

MR: Yes, all the artists really rallied to the space. Handelman adapted her multi-channel video installation, Irma Vep, the last breath (2013), part of a loose trilogy, to the walls of the gallery she was in. She started with the contours of the room in a very site-specific way, maximising the walls.

LW: It was tremendously effective. As were all the installations, including Evangeline’s new work, Sabacthani – very intimate, very touching, with the octagonal plan of the room crucial to the presentation.

MR: There is the sense that when you walk in to the building, it will be an adventure. Since at least the 1960s, artists have wanted to alter our perceptions, and contemporary architecture has picked up on that. Since it’s not a cookie-cutter space, it’s disorienting. You need to consciously orient yourself so you direct yourself to the objects rather than the space. It heightens your awareness of the art that’s around you, perhaps more than in a museum with a conventional floor plan. And we always use the spaces differently, for the same reason.

MR: Yes, which is the same as the rotunda of the Guggenheim. It’s not large, but it’s also not outside the league of major museums. It’s contained, on three floors, and the staircase, a Hadid signature, doesn’t interfere with the galleries. The building moves from east to west and tilts upwards sharply on the west side, as if blown by a gust of wind – very dramatic.

LW: What do you think museums should be doing now that’s different from before?

MR: We need to bring museums beyond their walls. We are going into the city to create art works for iPads, cell phones, all kinds of digital devices, at bus stops. The world is rapidly changing, but the museum world has been slow to adapt. We need to think like Google and Amazon – not to become like them, but to think adaptively about the future of museums. They are not just places of preservation. Most museums are centred around their collections. We, too, are very proud of our collection and we have an acquisitions fund, but we also need to move beyond that. As a contemporary university museum, we need to keep pushing the envelope. It’s time to think beyond conventional exhibitions.

LW: And your role as the director?

MR: A museum director is largely responsible for the vision of the museum and working to secure funding to see that vision fulfilled. Given my experience at the Rose Museum and others, I’ve learned a lot about what leadership is and is not. The director is a decision-maker about the present and future of the institution and must define what it will be. For me, we are a globally oriented museum of the 21st century: I always come back to that. Our audiences come from every state and 78 countries. We’ve had 130,000 visitors over a year and a half, which is remarkable for a small college town. Our goal is to bring art to the area, although a large percentage of our audience is not local. The drawback for the staff and me is that the excellent work we do is not as accessible to our colleagues in the larger art world, but that’s what we have to deal with in the provinces – even if the provinces are sometimes only 12 miles away, as was the case with the Rose Museum and Boston.

LW: And your role as a curator?

MR: Curating is close to my heart. It was a great privilege for me to curate the opening exhibitions and I seized the opportunity to do Handelman and Evangeline, two contained shows. As a director and curator, I have a broader handle on what the full functioning of the museum is, although, as a director, curating is not my primary job. I plan to do shows occasionally on subjects that are of keen interest to me, like the 50th anniversary show for video art with key works from five decades of video, but it would be rare. I hope I don’t interfere with my curators. We have a terrific curator, Alison Gass, and a terrific assistant curator, Yesomi Umolu, and there’s Chunchen, also terrific. We tend to have congruent views so it’s been smooth sailing, although there are those who think disparate views are also good.

LW: What are some of your plans for the immediate future?

MR: We’ve just been opened for a little over a year so my plan is to stabilise the museum for now. But the future is endless in terms of possibilities. I’m very excited about our brilliant physical building. I think it’s a very welcoming space for artists and visitors; it should be experienced. But I’m also interested in our digital presence, in more future-oriented methods and technologies. All museums are built around artists and the energies dictated by artists, but the art world still lives in a 19th-century model. Art fairs are like the arcades of 19th-century Paris; in museums, we still go from room to room with paintings on the wall. Yet YouTube posts 48,000 videos a day, probably more, it’s just an everyday reality. We have so far to go to catch up even with the present. That’s a big interest of mine. Where it will lead I don’t know, but I’d hate to see art become the caboose when it should be at the cultural forefront. 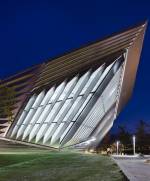 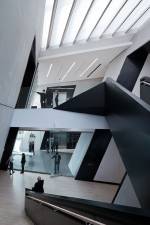