Despite the urban construction materials, the steel bars and concrete slabs, there is a strong sense that the viewer must ‘read’ Michael Dean’s sculptures in order to make sense of them

“How do you get in?” Thanks to Michael Dean’s intriguing new exhibition, attendants at the South London Gallery have found themselves answering this question more often than usual. As one approaches the entrance to the ground-floor main gallery, it becomes clear that something is afoot: the open arch has been closed, sealed by a sculpted barricade of metal, white concrete and plywood.

Visitors enterprising enough to persist will find themselves walking through the gallery’s gardens to a freshly painted back room, windows covered, floor dusty. Within this unfinished space stands a black tubular sculpture, an amalgam of urban construction materials: rubber-like ribbed exterior and concrete interior, punctuated with white plastic bristles and one cent coins, and a looping steel reinforcing bar resembling a partially exposed spine. Curled into an awkward shape, the object evokes handwriting, while refusing explicit signification.

Writing is at the heart of Dean’s practice, the inspiration from which his work in sculpture, photography, drawing and performance art is derived. The primary medium of Sic Glyphs is sculpture, with which he has worked for 10 years. For Dean, 38, sculpture is a personal affair: he began after the birth of his first child, he told the Evening Standard, and the exhibition’s title is a nod to his children’s overuse of the word “sick”. However, the artist emphasises that sculpture itself remains a conduit for something else: according to Dean, who also explored the three-dimensional possibilities of language in his 2011 exhibition Cope (Working Title), this exhibition is to be read as a “typographical texty field or a fXXXing forest of physically abstracted versions of my writing”.

And indeed these sculptures do resemble a forest, rising vertically and irregularly from the gallery floor. Most of the pieces here are variations on a similar structure – either rectangular blocks of metal or concrete pressed into corrugated profile, or cylindrical structures twisted into looping cursive forms – and each is warped and embellished with enough detail to suggest readable meanings. Stray concrete slabs are attached to their host with spaghetti-like reinforcing bars; belts and straps wrap around disjointed triangular forms; self-made magazines are scattered throughout, bearing images of cannabis leaves and Playboy bunnies copied and pasted into swirling patterns.

Some of these magazines sit in a neat pile weighed down by a pseudo-volcanic paperweight. Others are strewn, open and partially shredded, speared with reinforcing bars as if in arrested animation. Many concrete sculptures, including the entrance barricade, sit on crumpled beds of paper printed with the same drug-inspired iconography. Elsewhere a naked reinforcing bar is bent into parallel lines with hairpin turns, joined by small branches, stickers and other artefacts. In one sculpture, this orderly structure is joined by a more chaotic double, looping around as freely as a pen on paper, with a collection of moulded fists threaded on to it, gestures perhaps of the human intervention that shaped it.

Dean’s overarching subject may be glyphs, but he is employing these glyphs to explore a defined theme, “shores”. Stickers adorn the gallery’s walls and doorframes, stickers of the same variety one sees peeling and fading in cities around the world advertising plumbers or handymen. Dean has lifted the visual design of these stickers faithfully and to amusing effect, given they all repeat variations on the phrase: “Shore shores shored shoring 4 shore.” They reveal Dean’s abiding preoccupation with liminal space. Shores mark a separation between different realms, a transitional zone where things may be left behind and found again: threading a path through Dean’s sculptures, with their focus on walls, urban detritus and littoral plant life, allows the viewer to mimic the act of walking along an urban street or a dirty shoreline.

On a sunny day, the contrast between Dean’s work and the glowing white gallery space is arresting. Most sculptures are wrought in natural colours – browns, blacks, greens and blues – with surfaces that evoke bark, sponge and mud. An obelisk of jet-black concrete stands, porous yet firm, encased in mesh fencing with dead foliage hanging drably from the vertical face. Throughout, Dean is playing with the boundaries between the natural and the artificial, using common construction materials to create simulacra of natural matter, which are then pressed back into urban patterns.

The exhibition’s largest sculpture resembles a barricade made of driftwood. One hollow rectangle rests on the floor, another stands vertically, with struts supporting them in this perpendicular arrangement. A patch of grass sits limply in one corner. However, on further inspection, it is clear that this driftwood is, in fact, concrete carefully treated to look natural. Elsewhere, two pairs of reinforcing bars stand, tied into X shapes, with dead reeds tangled up around the legs. One pair is full height while another is bent perpendicular just above the central joint, making it strangely expressive and anthropomorphic, like a child with arms outstretched near its parent.

Dean has previously created sculpture by pressing parts of his body into the materials, and he has continued this practice in Sic Glyphs: scattered across the gallery are casts of fists, his own and his young sons’. These are both macabre in their disembodiment and comic in their impotence (visitors will find themselves taking care to not step on them), an expression of violence, celebration or secret-keeping. The hand, the conventional tool of writing, remains defiantly closed. Yet there remain hints at creative possibilities: a lonely group of reeds stands growing out of a clenched fist.

Lumps of clay or concrete, tongue-like in shape and texture, lie in a sad pile encircled by blue construction stickers forbidding “shoring”. One such tongue is tattooed with a bootprint, while bootprints are also to be found marking the nearby entrance blockade. From the inside, this wall looks desperate, flimsy, propped up by sagging struts and reinforced with chains, organic matter from the outside nevertheless peeking through the cracks. The thematic preoccupation with shores, borders and the materials that enforce them invites political interpretations in the light of Europe’s ongoing refugee crisis. Such impressions may seem like futile grasping for tangible meanings, but that is precisely what is being asked of us. Dean maintains the suggestion of legibility – and only that – in order to spur visitors to think for themselves. It certainly makes for interesting reading. 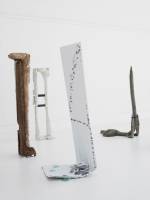 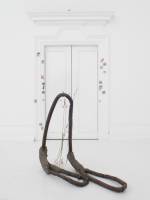