London is a place continually remade by writers and artists, layering their own versions and theories into the web of thousands of years of civic rumour and counter-claim.1 You might think that the last thing the city needs is more invented folklore, but this is what Daniel Roth has given it in 'The Well' - an installation that draws on a mixture of fact and legend to create a spring that supposedly bubbles up right in the middle of the gallery. The focal point is a bunker, constructed, with geological accuracy, from slabs of peat, a rough cube from which black water spurts via two steel pipes into Perspex cups before disappearing down more pipes into the floor.

The black water indicates that this is something very different from the healing waters of Aquae Sulis or other holy wells - and any doubt is removed by a prominent vitrine holding the flayed skin of a human torso (or at least its mock-up). This appears to have pipes feeding the well water into it, causing a mysterious rash to appear on the skin. Between the glass case and the bunker is a small square pond, filled with the same unmoving, Stygian liquid. Copper pipes run around the walls, plugging into the ceiling at one end and into the peat bunker at the other. Completing the scene is a collection of maps and photographs, and line drawings on two opposite walls, invisible until you move up close.

The light-filled exhibition space prevents the whole affair from descending into the truly Gothic - even the black pool reflects the building's skylights - but there is an undeniable sense of mystery and menace. However, with the help of the gallery newspaper and Christopher Jones' Subterranean Southwark, we can discover a few of the sources, in all senses of the word, that the artist is drawing on.

The gallery is located between Camberwell and Peckham, almost on the watershed of two now-buried rivers, the Peck and Earl's Sluice. As the name suggests, Camberwell was once full of natural springs, as well as artesian wells bored to serve local industry. The map on the gallery wall, taken from Nicholas Barton's The Lost Rivers of London, shows the courses of these and other erstwhile streams: the Effra, the Ravensbourne and the Neckinger. And as Jones' book tells us, these were far from pastoral brooks. Accounts differ as to whether it was the Neckinger or Earl's Sluice, but in the 16th century, the river that crossed the Old Kent Road at a place known as St Thomas a Watering was the site 'for executions for the County of Surrey with saxifrage, burr-reedes and water gladioli all recorded as growing in the ditch right against the place of execution'.2 The connection between water and death, fostered by the Romano-British practice of (possibly) throwing slaughtered dogs down wells, is strengthened by stories like these. A more direct and verifiable link to Roth's black well comes from 1927, again in Jones' book:

Roth's installation takes these elements and builds on them, weaving further strands into a net of fantasy. Two of the photographs on the wall are stills from Ingmar Bergman's film, 'The Virgin Spring' - a dark parable of death and retribution with pagan undertones. The red spots on the torso (with their echoes of pox and the plague, crypts flooded and coffins floating downriver) trace the outline of the 13th-century underground Ethiopian church pictured in the gallery newspaper. I immediately connected these disparate pieces of data with the torso of a boy found in the Thames in 2001, apparently the victim of a ritual killing.

This illustrates the trouble with folk theories: they distort facts to fit the ideas. A few minutes' research revealed that there was no discernable connection whatsoever between the Lalibela churches of Ethiopia and the 2001 killing, other than that the newspapers had linked the latter to abuse in African churches. Even then, these were west African, not Ethiopian. It's possible that Roth simply meant the underground monolithic church to continue his theme of hidden structures, but when you 'construct complex narratives ... which suggest conspiracy theories and secret histories', as the text on the gallery wall puts it, you have to expect the symbols to escape from your control.

Stepping away from the macabre, the installation could, instead, evoke biological circulation, with the rushing water at its heart. 'The Well' then becomes a re-discovery of our own fleshly nature, the dark truth of mortality that society would sanitise or bury. However you read it, this psychologically potent installation provides a disturbing addition to the fictional city. 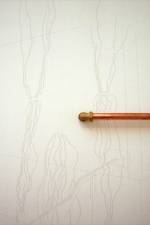 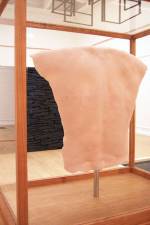