Opening to coincide with the first Russian Art Week during the UK-Russia Year of Culture, Russian Cosmism, presented by Moscow-based curator and gallery owner Maxim Boxer, is an exhibition and auction in one, bringing together 50 works – all for sale – by modern and contemporary Russian artists, exploring the philosophical and aesthetic movement that was born in Russia in the early-20th century.

The first in a projected series of exhibitions and auctions, the aim is to attract European and Russian collectors and galleries. With lots priced between £500- £10,000, affordability is key to the concept. 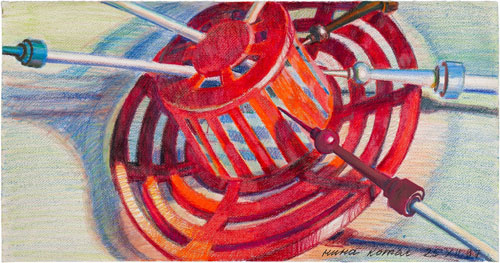 Nina Kotel. Spaceship, 1997. From the series From the sketches of the first Russian colonists on the Moon. Courtesy of Maxim Boxer, Russian Cosmism: Modern & Contemporary Art, 29 May-3 June 2014.

Studio International spoke to Maxim Boxer in the run up to the event.

Anna McNay: First, can you tell me a little about the UK-Russia Year of Culture and what it hopes to achieve?

Maxim Boxer: Actually, I don’t know much about the Year of Culture because we are not in the official programme. When we started our project, the list of the participants was already closed.

AMc: So how long have you been working on your exhibition and auction?

MB: We started in December [2013], but I’d had the idea several months earlier. In December, we started to think about the collection and we began negotiations with the artists.

AMc: Are there going to be any reciprocal events in Moscow?

MB: Yes, there will be a presentation of the project, showing some of the lots from the auction, and a small press conference. We also want to invite our friends, the artists and some collectors. This will take place in the Central House of Artists on 21 May.

AMc: So, just before the events in London, then?

MB: Yes, because the beginning of May is full of holidays in Russia, so we couldn’t hold it any earlier.

AMc: But it is also well timed, because your event in London falls during Russian Art Week.

MB: Yes, that was the point. We wanted the event to be during the Year of Culture and during Russian Art Week.

AMc: Has the current political situation had any effect on what you wanted to organise?

MB: No. Obviously the mood of the people has been affected by it, and art is very sensitive to how people feel. Probably, as a commercial enterprise, it will be affected, but I don’t think it will be affected as an exhibition. We are happy to show what we have prepared, because it is very Russian, very typical. It should be interesting for specialists as well as for the public. We are very excited.

AMc: Where do you hope to attract collectors from?

MB: We are expecting a lot of European and Russian collectors to be in London for the major Russian Art Week auctions, and we hope that they might be interested in our small project as well. Hopefully, we will generate some interest during our Moscow exhibition, and we are already distributing our catalogues in Moscow too.

AMc: Can you tell me a little about the catalogue? It is quite unusual.

MB: We decided to make it all very professional, so the design of our catalogue and our website was done by a very good graphic designer in Moscow. It is different from the catalogues of other auctions. The texts have been written by the artists themselves and by the curator, Vitaly Patsyukov, and sometimes they are very strange. I think it will be interesting for English art critics to read the texts of Russian art critics because they are artefacts in themselves.

AMc: You have your own gallery in Moscow, as well, don’t you?

MB: Yes, but it is for modern art. Works on paper by Russian and French artists from the first half of the 20th century. I used to have a contemporary gallery for five years, but unfortunately this closed down in 2009.

AMc: So this exhibition and auction are entirely separate from your gallery?

AMc: Did you already have links with Erarta Galleries in London, which is hosting the exhibition and auction?

MB: Yes, of course. And it is also excited and expects a lot of interest from its people as well. It liked the project. Erarta has been very helpful.

AMc: Whose idea was it to organise the exhibition and auction? Did you work alone?

MB: I have a partner, Konstantin Semkin, a young collector of modern art. I had an idea – but it was only very vague – about a niche in the auction market, because people involved in the larger auctions can only pay attention to well-known artists and not to young artists. He said that if I would like to think about this some more, he would be pleased to help me develop it. I don’t really know anything about business in the UK and all those official things associated with companies and payments, and he was kind enough to promise to cover this field, so that I could focus more on the idea. The second step was that we decided it would be much better to host an exhibition and an auction together, as a larger project. Not because we were afraid that we wouldn’t sell: the main idea was to make it different and somehow educational, revealing the trends of Russian art. The third step was to include some lots from the beginning of the century that would emphasise the links between contemporary and modern.

AMc: Where did the theme of Cosmism come from?

MB: I was talking with my friend Alexander Ponomarev, who is a well-known artist and has done a lot of projects across Europe and participated in numerous biennials. He is one of the key figures in Russian contemporary art. We were discussing the idea of an auction, and other unrelated things, when we came to the ideas of Nikolai Fyodorov, who was the father of this philosophy. During our discussion, we realised that a lot of Russian artists are still influenced by this. Suddenly, we had the idea of making it the first theme. Soon afterwards, we heard that London’s Science Museum was also holding an exhibition on a space-related theme, with the Large Hadron Collider, and then we kept coming across other projects that related somehow to ours. We thought it must be in the noosphere.

AMc: Can you explain a little bit about Cosmism and what it is?

MB: It’s a very strange philosophy because Fyodorov was working in the library, thinking about religious theories, and mixing them with his fantasies and dreams. He had the idea that when, in the future, all the souls are resurrected, there will not be enough space on Earth for us all. So he started thinking of sending people into space, to different worlds and different planets. He was a close friend of Konstantin Tsiolkovsky, who was the inventor of rockets, and the first man who seriously thought about space travel. For the first half of his life, Tsiolkovsky was very influenced by Fyodorov’s ideas. All his theoretical knowledge was also a fantasy, and poets and artists were very influenced by his ideas and started to make a lot of artefacts and paintings in response. The government was very interested in Tsiolkovsky between the wars, and it is thanks to this that his ideas weren’t simply buried along with him when he died. He was granted a laboratory, and people helped him, and all of this led to a great movement: Cosmism. Cosmism had a second heyday after the first flight into space. In the 1960s, artists and science fiction writers alike were obsessed with the idea of space travel. The third key moment is now. This is a time of great nostalgia.

AMc: Is Cosmism something really intrinsically Russian, or is there some international element to it as well?

MB: It is actually very Russian because it is not very technological and not very scientific, but there are also some ideas from Cosmism to be found in the science fiction works of Ray Bradbury and Arthur C Clarke, which are also quite philosophical.

AMc: How did you select the artists involved in the exhibition and auction?

MB: Konstantin and I made a preliminary list and we then went to Patsyukov, a well-known curator of exhibitions of contemporary art, and we discussed it a lot and made a shortlist of artists who should participate. Not all of them are included, however, because we decided to make the auction prices affordable and never to exceed the average price in Moscow galleries. We couldn’t persuade all the artists to agree to these prices. Equally, we didn’t want to have a big auction of more than 50 lots, and that’s why we didn’t take too many young artists.

AMc: Are all the works in the exhibition for sale?

MB: Yes, it is an open auction.

AMc: I know that this is the first exhibition and auction in a series. How long do you envisage the overall project continuing?

MB: Well, we decided that we could afford to do three projects, spread over a year and a half, and then we will see what happens.

AMc: Your next exhibition and auction will be on Metaphysics in Russian Art from the Soviet 1960s to the present, showing how the ideas of Georgio de Chirico and Georgio Morandi allow a sort of “self-immigration” – a resilience of mind – that offers a way for certain artists to survive. This is planned for autumn 2014. Can you tell us any more about what we have to look forward to?

MB: This event will also take place in Russian Art Week (there are two each year). The theme will be much wider than Cosmism and so we hope that we will make it a big auction with at least 100 lots. The theme for the third project is still open, and things are changing all the time, so who knows? 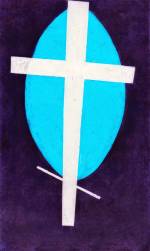 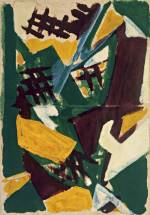 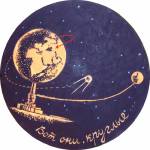 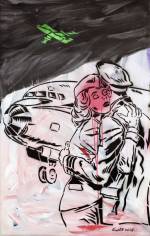 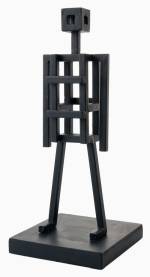 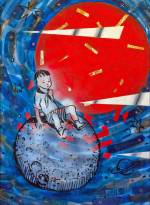 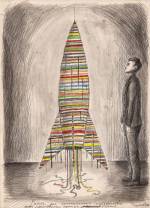