Corin Sworn, the fifth winner of the biannual Max Mara Art Prize for Women, has taken the 16th-century Italian commedia dell’arte as the theme for her exhibition about mistaken identity

A darkened gallery filled with peculiar objects: ladders, signposts, a stuffed rat, cheese, coloured light bulbs, mirrors, a wardrobe on wheels. You could be forgiven for wondering whether you hadn’t perhaps wandered backstage at a theatre, rather than in to an exhibition at the Whitechapel Gallery. But this is precisely the point. Corin Sworn’s exhibition is an installation piece – Silent Sticks (2015) – about mistaken identity, and these objects are all based on stage props used by 16th-century travelling theatre troupes.

Sworn (b1976) is the fifth winner of the biannual Max Mara Art Prize for Women. She was selected by a panel of judges, which was chaired by Whitechapel Gallery director Iwona Blazwick and included gallerist Pilar Corrias, collector Candida Gertler, artist Runa Islam and curator and writer Lisa Le Feuvre. Based on her winning proposal, Sworn was awarded a six-month Italian residency, which she split between Rome, Naples and Venice. She used this time to meticulously research the 16th-century Italian Renaissance art form of the commedia dell’arte, with its exaggerated expressions and gestures and tales of subterfuge and misrecognition at a time when rapid social and economic change were bringing about anxieties regarding status.

As a vernacular art form, the commedia leaves behind very few material records and so, to produce her installation, Sworn worked with inspirations and legacies, such as the humour she discovered during her time in Rome, which was “a very mild type of social misbehaviour – people not following rules, or bending them to suit them in rather canny ways”.1 She did, however, find a list by a 16th-century playwright of the props used by his travelling troupe. She also came across a famous story of a peasant and his trial and ultimate sentencing to death for imposture – abandoning his own life to live the life of another. Sworn’s work adapts this tale and presents it with contemporary twists, using acrobats and dancers, whose movements are shown on screens, standing amid the props, accompanied by a narrative soundtrack of actors. Set against black backdrops, the acrobat-actors appear out of space and out of time. “When I was reading about the commedia,” says Sworn, “there were some beautiful descriptions of what was witnessed on stage, in particular the incredible acrobatic feats … People were drawn to this form of theatre by this spectacular use of the body – it was incorporated as an anarchic disruption into the narrative, it did not exist only for itself.”2

The actors’ voices emanate from different directions, sometimes overlapping. “If costume could be put on and off at will, then man could literally make himself,” one says. Mirrors reflect the visitors into the installation, making them part of it, caught up in, and complicit with, the tale of deception.

Sworn was interested in the use of mistaken identity as a literary device in early theatre productions. Characters from the commedia dell’arte have gone on to serve as inspiration for writers such as Shakespeare and Marlowe and artists such as Goya and Picasso. Typically, masters would dress as servants, lords as beggars and women as men. In fact, the commedia was the first time that women were seen on stage, and many of the well-known female actors were respected for their quick wit. Sadly, in the little documentation that does exist of scripts, much of this was lost since they were penned largely by men, who typically simplified the women’s roles. Perhaps this in itself is significant, given that the Max Mara Art Prize was set up in 2005 specifically to promote and support women artists in the UK, in a landscape still dominated by men.

Sworn was also intrigued by the details of the costumes and she collaborated with the seamstresses at the Max Mara fashion house to produce the garments for her work, which comprise period outfits layered with contemporary elements. “Historically, costumes always signify a production of the past in the present,” says Sworn. “I am not interested in trying to recreate the past, but rather playing with the way that I read some aspects of the past.”3

Perhaps these readings themselves are cases of mistaken identities? Misunderstandings at a distance of time and space? Can we ever understand another era without having lived in it? Can we ever understand another culture, another language, another way of life? Pretence is what this show is all about – pretence, misunderstanding and deliberate deception. As Whitechapel Gallery Eisler curator Daniel F Herrmann points out, even the props are imposters, having, in themselves, no real function, but pretending – or acting – as if they do.

The effect of this installation might at first seem underwhelming. A large gallery space sparsely filled with simple objects. There isn’t really much to see and the narrative takes some time and effort to comprehend – if at all, without the supporting materials and texts. There is no great wow factor or impressive aesthetic – artistic? – element to this exhibition, but does that mean it’s without value? It is certainly one that improves the more you know about it. Sworn devoted a great deal of time and research to the project, and as a presentation of her findings – along with her interpretation of these – it succeeds; as a work of art, I’m not so sure it does. That said, I arrived at the press view early and was lucky enough to enjoy a 15-minute private audience with the work. It is under such circumstances – being left alone to become absorbed and to imagine, to take on a role and to questions one’s identity – that this piece needs to be enjoyed. Time your visit accordingly.

1. Corin Sworn in conversation with guest curator Bina von Stauffenberg. Taken from a preview excerpt from the exhibition catalogue, published by the Whitechapel Gallery and Collezione Maramotti. Available from June 2015 from whitechapelgallery.org
2. Ibid.
3. Ibid. 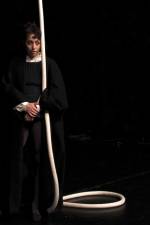 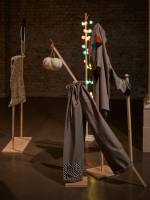