Mark Fairnington: ‘The work I do with scientists echoes their speculation and observation rather than any ensuing claim to truth’

Mark Fairnington: ‘The work I do with scientists echoes their speculation and observation rather than any ensuing claim to truth’

The artist talks about his work researching natural history collections, how he crosses the divide between art and science, and his deadpan English brand of surrealism

Mark Fairnington has been exhibiting a new body of work, A London Assembly, at the Delahunty Gallery in London this summer. During a symposium on portraiture at Corsham Court, near Bath, organised by the University of the Arts London and Bath Spa University, it was possible to talk at length about his work and wider issues pertaining to portraiture and drawing in contemporary art practice.

Janet McKenzie: Your work occupies a position somewhere between the 18th century Enlightenment collectors, who sought to rationalise the unfamiliar objects, birds, animals, flora and phenomena from the New World as they were discovered, and a disconcerting, surrealistic art.

Mark Fairnington: Researching natural history collections has been important for my work, collections started from the thousands of specimens that were brought back from the first voyages of discovery. One focus of my work is the line that can be traced between observation and speculation: the fictions that build up around facts in the natural sciences.

One example of this is the origin of the name “birds of paradise”. It was in 1522 when Europeans saw the first specimens, skins that had been prepared for trade by having their legs removed by the native Papuans, sometimes along with the wings and heads. They wondered how these birds could exist without wings or feet, and believed that they must have lived their entire lives in the air, that they were birds of Paradise.

The imagined life cycle of these birds, although based on the study of specimens, seems to represent a desire on the part of the observers. Stories like these are important representations of our changing relationships with the natural world. While they may be described as footnotes in the history of science, their narrative power persists.

Painting can create spaces in which the meaning of the image is continually renegotiated, and this is the point at which the work may relate to surrealism – a very deadpan, English, surrealism where a sense of the uncanny lies almost dormant.

JMcK: How did your work evolve from your art-school days to the highly recognisable works you now produce?

MF: When I was at college, I drew underground comic books and later worked as a caricaturist at NME [New Musical Express]. I started painting again when I was living on a council estate in south-east London and wanted to tell the stories that people tell each other about living in a place like that: stories that become urban myths. I did a show called Things that fall from tower blocks.

My first work that looked at specimens in an existing collection was with the Mantidae in Oxford University Museum of Natural History. The best known of these is the praying mantis, a creature revered by the surrealists because the female will eat the male during sexual intercourse. The paintings depict the specimens as specimens – not the insect as it might appear in its most perfect state. They describe the complex surface detail of the specimens as they are now, including the damage that has resulted from the collecting process. The specimens are described in more detail than can be seen with the naked eye.

I went on to work with the Natural History Museum in London and became increasingly interested in how collections are stored, displayed and represented

JMcK: In the context of portraiture, do you consider notions of embodiment and absence, invisibility and presence, when you choose subjects and when you are drawing and painting?

MF: The portrait has appeared in my practice at different points and, for most of the time, has been adjacent to the main body of work. In an early series called The Confessions, I made transcriptions of early Renaissance portraits, editing out everything except the headwear.

In the eye paintings, a single eye on a round panel is all that is depicted, echoing Victorian keepsakes. The images have a strange and very powerful presence; recognisable portraits of the individuals – animal and human – disembodied yet full of vitality. The cropping and editing has always been important, the fragment becoming a kind of artefact much as the specimen might represent the species, and the history of its taxonomies.

JMcK: You regularly paint portraits of your twin sons. Can you describe the process of working with your children as opposed to the sculptures and casts in the Wellcome Collection [Fairnington began working last year with the Wellcome Collection in London, which comes from the vast personal archive of the pharmaceutical entrepreneur Sir Henry Wellcome, 1853-1936, and specialises in medical artefacts]?

MF: Sculptures and casts don’t object to being painted and they usually remain still. It’s difficult even to photograph the boys.

JMcK: The still-life genre or “nature morte” occupies a long tradition in painting, which, in your work, assumes a very haunting character. Is this intended?

MF: Yes. Many of my paintings in the past have depicted taxidermy specimens and a stuffed animal is always a strange thing to look at, a representation of a creature that couldn’t be more realistic, apart from the fact that it doesn’t move.

JMcK: Do you make conscious decisions in your choice of objects or subject matter in terms of meaning, metaphor and symbol?

MF: Not really. The choice is intuitive. During my first visit to any collection I will be simply gathering information, taking photographs. From the beginning of my visits to the Natural History Museum storage depot, one image in particular fixed itself in my imagination, a group of giraffe heads on a wooden platform. The idea for the painting came at a single moment, almost two years after first seeing the specimens. It took that amount of time for me to know the image well enough to use it. The symbolic meaning of the work developed with its making, and I used the title, The Raft to allude to this. Théodore Géricault’s Raft of the Medusa was a key reference point, depicting the destructive force of nature, human negligence and cruelty, and survival.

JMcK: Your work ranges from the most delicate botanical illustration to life-size paintings of prize bulls. Is this as incongruous as it first appears?

MF: The scale of the images in each series is vital, and established right at the beginning. I wanted the bull paintings to exude a physical presence, to be as close to being next to the real bulls as possible. The paintings appropriate the scale of the animals. The Mantidae were painted at human scale, cultivating powerful anthropomorphic references.

The current series The Collected Human, from the collection of Henry Wellcome, are all miniatures, like relics or keepsakes, things that you might hold in your hand and treasure.

JMcK: The Wellcome Foundation seeks to close the gap between art and science by supporting projects that address the divide. How does your practice occupy the interface between what CP Snow called “The Two Cultures”?

MF: I am not a scientist, not a botanical artist, nor a wildlife artist. I am not bound by the rules of these disciplines, and the images I make, where their meaning is constituted, enters the world as fiction. The intense observation that is required for the painting echoes certain scientific procedures, but it is put to different use. [The moral philosopher] Mary Midgley is fierce in her analysis of the fictional outgrowths of science – its sometime claims to omni-competence. The work that I do with scientists echoes their speculation and observation rather than any ensuing claim to truth.

JMcK: Is it reasonable to suggest that you have removed your objects from either a scientific or art-historical context, and that heightens a sense of enigmatic unease?

MF: Yes. The paintings isolate elements from the collection much as the eye paintings separate the eye from the body. The fragment comes to represent the whole. The paintings generate representations of the objects cast adrift among each other, relating promiscuously like words on a page. The collector’s drive to order, and understand and contain is thwarted posthumously by this miscegenation.

MF: These are paintings of three objects as they are stored in the Wellcome collection. Created in the late 19th and early 20th century, the Henry Wellcome Collection represents a history of how the human body has been perceived, understood and studied in different cultures. It is a place where the histories of art and science criss-cross. Wellcome’s collecting was on an unprecedented scale and, at the time of his death in 1936, the collection was too vast and disorderly to be organised or researched.

What remains of the collection is now housed in a storage facility in West Kensington, London, and is not accessible to the general public. Objects that are housed in closed cabinets shift fluidly between medicine, art and anthropology, creating juxtapositions that are disturbing, unexpected and profoundly moving. There are rooms of prosthetic limbs, and shelves with plaster death masks of executed criminals. The figure is present here as specimen and image and in the form of objects made to fit the body, operate upon it, injure, disguise, protect, embellish and contain it.

I am making a series of paintings entitled Collected Human that describe and reimagine some of the human images as miniature portraits. These images are poised between appearing alive and dead.

The Forgettory is a painting of the head of an anatomical figure. The bandages that appear to bind it have been put there by conservators to protect the object from accidental damage. My mother is in a fairly advanced state of dementia, and the title for this painting comes from an increasingly rare and touching moment of lucidity, when she told me that, while she has no short-term memory, she has a very good forgettory.

Prophet depicts a wooden sculpture of a head that has ivory teeth, lying on its side as if in a state of religious contemplation. The mouth reminds me of the mouth of the saint in Bernini’s sculpture Ecstasy of Saint Teresa.

Shelf is a painting of a series of death masks, plaster casts of faces and heads made after a person has died. It is believed that most of these are casts of convicted criminals after execution. 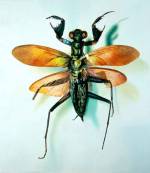 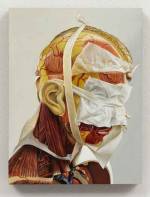