Grace Ndiritu – interview: ‘Museums hold our collective past and they can hold our future’

Grace Ndiritu – interview: ‘Museums hold our collective past and they can hold our future’

Ndiritu talks about her show at the Wellcome Collection, where a Zen Buddhism-inspired temple allows visitors to contemplate her tapestries Repair and Restitution, and explains why reshaping the role of museums is so important to her

Healing forms the bedrock of the British-Kenyan artist Grace Ndiritu’s multidisciplinary artistic and spiritual practice. In 2012, she launched a body of work titled Healing the Museum, feeling that art institutions had lost touch with the public and the sense of “sacredness” that fosters critical thinking and understanding of their collections. Through shamanic rituals, meditation and holistic workshops, Ndiritu has sought to reactivate museums with the aim of making them living spaces of collective learning rather than places in which to passively observe objects. Ndiritu’s show The Healing Pavilion at the Wellcome Collection in London continues this line of action. 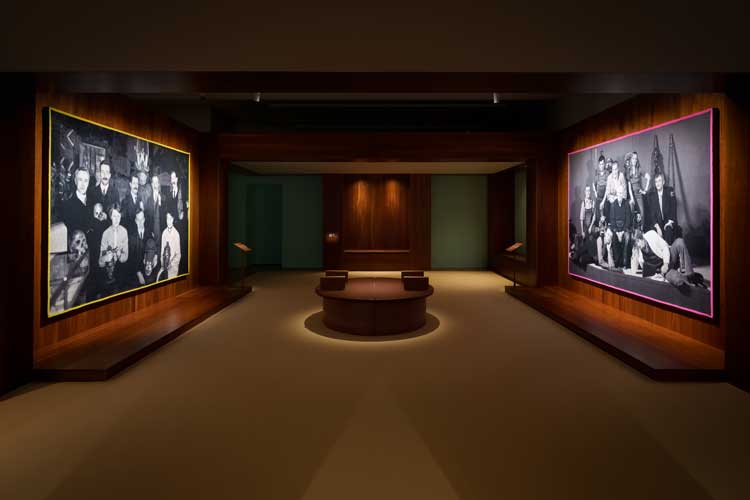 Using walnut panels taken from the Wellcome’s now dismantled Medicine Man gallery, which housed ethnographic objects collected by the 19th century pharmaceutical entrepreneur Sir Henry Wellcome, the artist has constructed a Zen Buddhism-inspired temple for contemplation of her installation The Twin Tapestries. There are cubbyholes for shoes as one finds in some places of worship (although most visitors seem to be keeping them on). Inside are two enlarged photographs woven on tapestries titled Repair and Restitution, which hang on opposite walls. Repair is taken from a 1915 archival photo of staff at the private Wellcome Historical Medical Museum, the forerunner of the Wellcome Collection. Wearing formal attire, the staff pose stiffly as they hold various artefacts, including human skulls and masks. Restitution has an altogether different tone, based on a photo from 1973 showing casually dressed staff at the Ethnologisches Museum in Berlin arranged around an intricately beaded royal throne from the Kingdom of Bamum in Cameroon. Staged like a magazine photoshoot, with some people reclining, others leaning or sitting on the throne, hands jauntily on hips, there is a playful, lighthearted air that is in sharp contrast to the symbolic power originally invested in the throne. 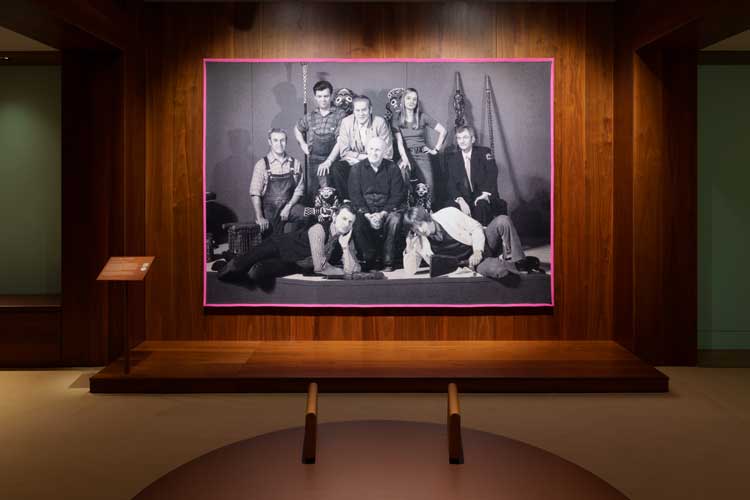 While Restitution is the more shocking of the two images, both underline the sense of entitlement and superiority that long characterised the western museological approach towards African collections. Together, the Twin Tapestries invite us to reflect on the relationship of these objects to their western guardians, how they arrived in these collections and the colonial violence that is bound up in their stories. “Repair and Restitution are two sides of the same coin,” says Ndiritu. “You need both processes to happen.”

The installation includes an audio guide for visitors with breathing exercises and information on the works, which is intended to encourage a meditative mood. “The Pavilion I see as creating a safe space within the museum to talk and discuss difficult issues,” says Ndiritu, whose work spans painting, film, books, textile, installation and social practice. The artist has considerable experience nurturing such conversations around effecting constructive change. Under the aegis of the Goethe Institute, she spent two years from 2019 working with African and European scientists, academics, artists, activists and museums in Belgium, France, Germany and Italy on the topic of restitution of objects.

Although concrete results can be hard to quantify with Ndiritu’s interventions, the impact of her project A Meal for My Ancestors (2018) at Thalielab in Brussels, part of Healing the Museum, surpassed her expectations. Having worked for four months with a group of migrants, refugees and activists and another group of officials from the EU parliament, Nato and the UN, Ndiritu brought them all together for a shamanic performance; afterwards, one of the participants was so inspired that she submitted a briefing paper to the EU parliament on changing the law around climate refugees.

Ndiritu studied textile art at Winchester School of Art and attended De Atelier art school in Amsterdam, where her tutors included Steve McQueen, Tacita Dean and Marlene Dumas. She has been involved in esoteric practices for most of her life, having spent long stints in ashrams, permaculture communities and Buddhist monasteries. In 2012, she decided to go off grid and lived in alternative communities for six years. Throughout, she has continued her work on Healing the Museum, giving shamanic performances at museums around Europe. Last month, she won the 2022 Film London Jarman Award for two films that explore journeys of the mind in different ways. In spring 2023, Ndiritu will curate an exhibition from the collection of the Museum of Photography (Fomu) in Antwerp and will have a major survey show at Ghent’s Municipal Museum of Contemporary Art.