At the home of his iconic equestrian sculpture, The Angel of the City, this retrospective of the Italian sculptor Marino Marini explores the breadth of his practice and range of his influences 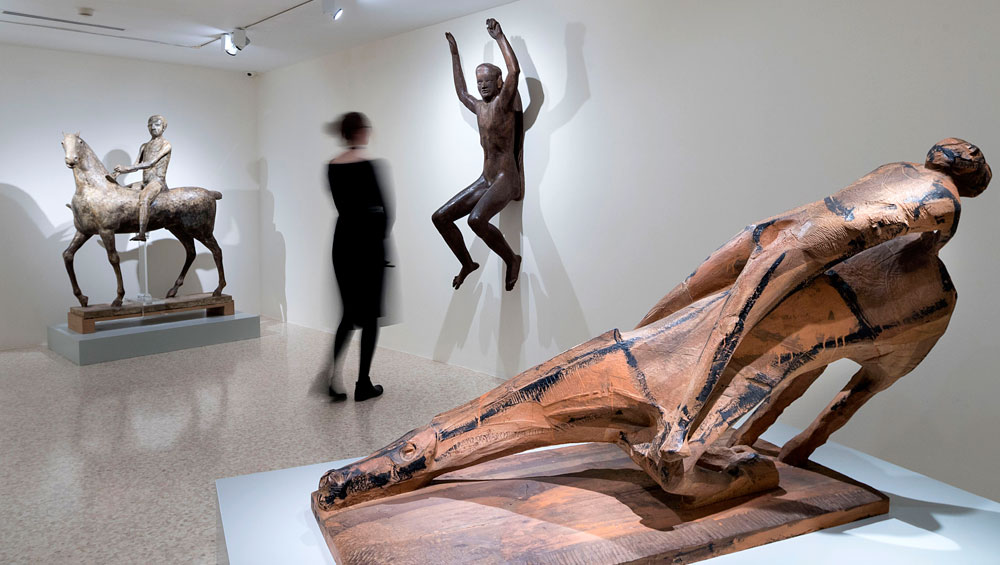 Marino Marini (1901-80) is largely synonymous with equestrian sculpture, his depictions of horse and rider having developed, from their first appearance in 1936, to reflect the artist’s changing sociopolitical and philosophical views, as well as his existential anxieties, and epitomised by The Angel of the City (1948), standing proud, horse’s neck and rider’s limbs (all five of them) erect, outside the Palazzo Venier dei Leoni on Venice’s Grand Canal. 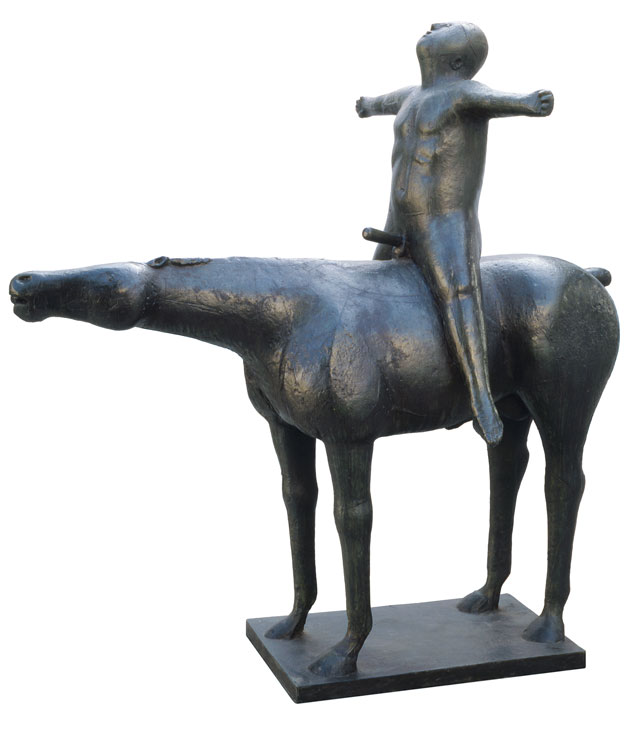 However, as shown by this touring retrospective, which opened last autumn at the Palazzo Fabroni in Pistoia (the Tuscan city where Marini was born) before moving, appropriately to the Peggy Guggenheim Collection (housed in the Palazzo Venier dei Leoni), his legacy is far greater than just this. With more than 50 of his works on display, the exhibition has been cleverly and informatively curated so as to place Marini’s work within the wider art-historical context, ranging from early Etruscan sculpture, through 15th-century Florentine works, to Auguste Rodin and even Henry Moore. Each room juxtaposes works by Marini with works by his contemporaries, or those who influenced him, highlighting the development of his thought and practice. 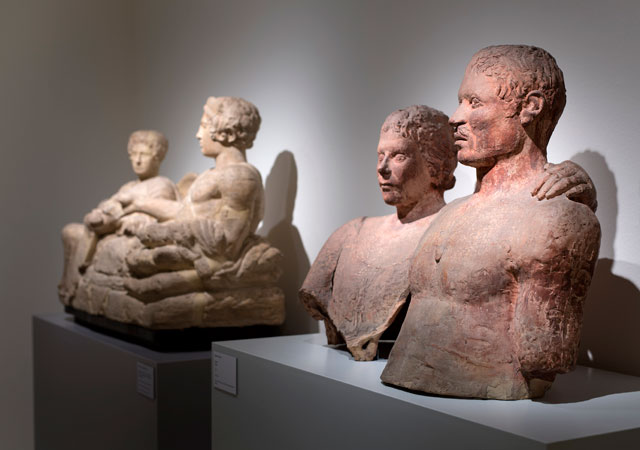 The exhibition opens with two of Marini’s early terracotta heads, shown alongside an Etruscan one from the votive deposit of a temple from the early first century BC. The similarities are striking, but what makes Marini’s pieces stand apart are the agitated chisel marks on their surfaces. In a film on show in the entrance hall, the sculptor talks of how he “revives” his forms as he chisels away, giving them life, but equally of how this broken and damaged surface mirrors the wear and tear and destruction each perfectly formed child is subjected to as he lives his life exposed to constant threat. As his career progresses, and as Marini himself absorbs more and more of this perceived threat, so his once serene subjects are seen to move further into a state of anxiety and agitation. 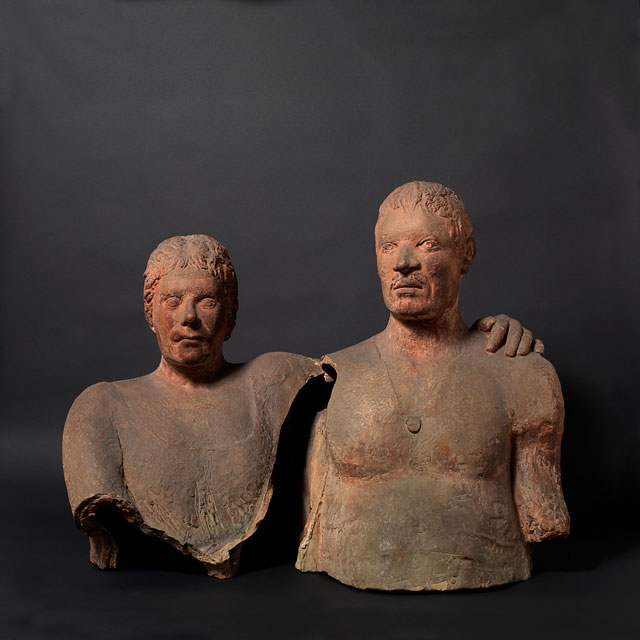 In the 1920s and 30s, when Marini began exhibiting nationally, his work was noticed for breaking away from the over-decorative and classical style that was fashionable in Italy at the time. His Swimmer (1932) and Boxer (1935) exude the exhaustion of physical effort. Shown alongside bronzes by his “ideal master”, Arturo Martini, and his contemporary Giacomo Manzù, whose David (1938) draws out the childlike subject’s psychological properties, Marini’s woodcarvings focus simply on volume and presence. 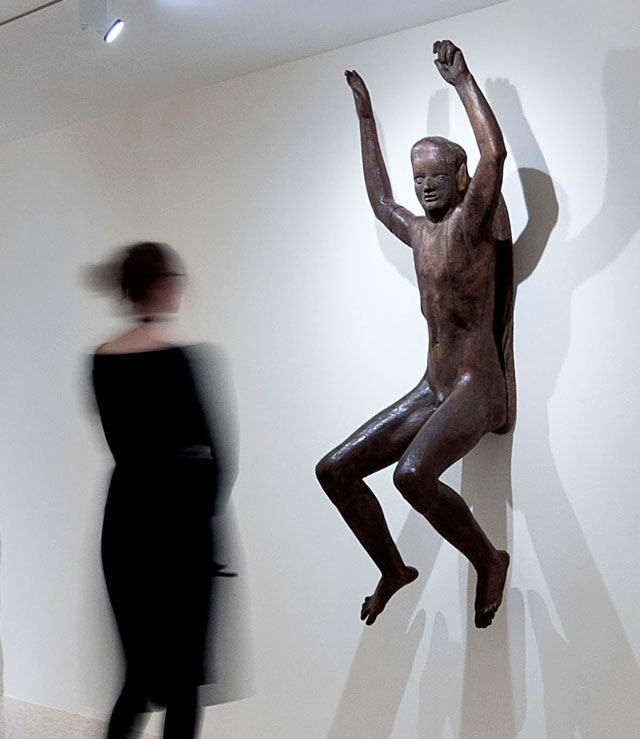 His Icarus (1933), fixed to the wall, limbs akimbo, dramatically emphasises the diagonals, and, in so doing, echoes the form of a Gothic crucifix. This ability to simplify and almost abstract the human body into geometric angles carries through his practice and is what makes his later Jugglers and equestrian sculptures so striking and enduring. There is a clear influence of cubism, in particular Picasso’s Guernica (1937), as a metaphor for violence and tragedy. In the later Miracle (1955), for example, the horse has stumbled and the rider’s back is arched in an effort to halt his fall – a simple, yet effective, reflection on the state of humanity, which speaks as clearly spatially as it does figuratively. 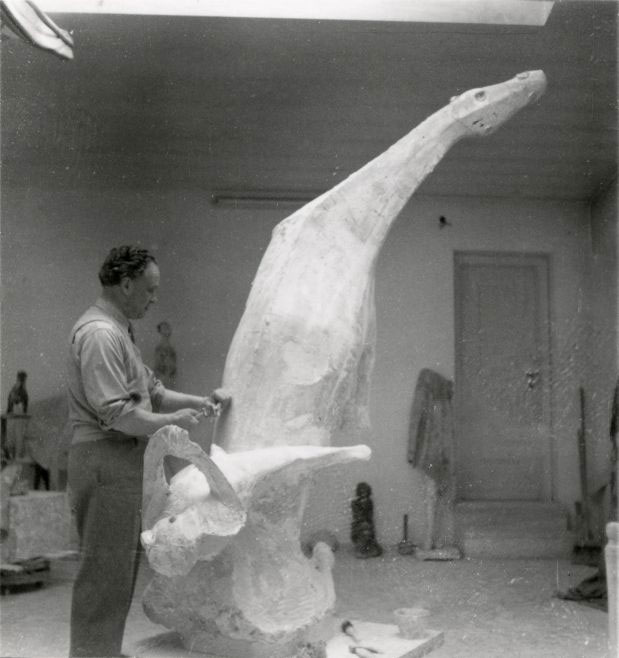 The central section of the exhibition focuses on Marini’s female nudes. Interestingly, while the sometimes limbless torsos might not exactly be idealised, they are still far more classical than his males, who seem more contemporary and alive. In his Pomona series of Juno-esque women, Marini sought to create “an absolute and virgin form”. He described these works as “a vast search for forms, lines and masses. My women, whom some find clumsy, are an answer to this concern. In the figure, I commit myself to analyse, within the ever more unified, fixed and yet free and relaxed whole, the natural play of volumes.” 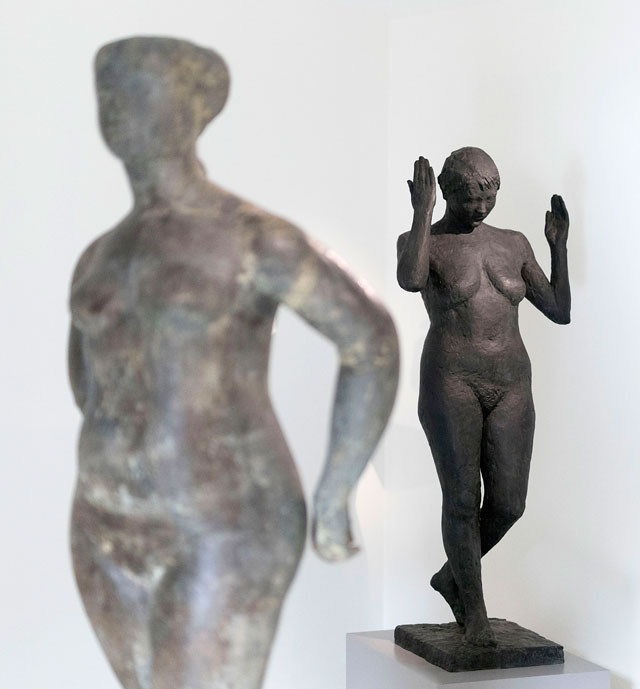 While Marini was a sculptor through and through, he learned much about relations between light and shade on the surfaces of bodies from the Phaidon monograph reassessing Rodin, published in 1939, and some of his experiments can also be seen in a number of drawings on display alongside the 3D works. A vitrine further pairs three smaller works by Marini with three by his French forefather, including their bronze jugglers of 1940 and 1892-95 respectively. Marini’s Juggler would, however, better be compared to Rodin’s provocative Iris (c1895), in which the truncation of the female torso and opening of her legs focuses the viewer’s attention on her genitals. Marini’s work might almost be seen as a direct male counterpart, curiously amputated at the shoulders, when depicting an artiste whose very talent depends on his arms. 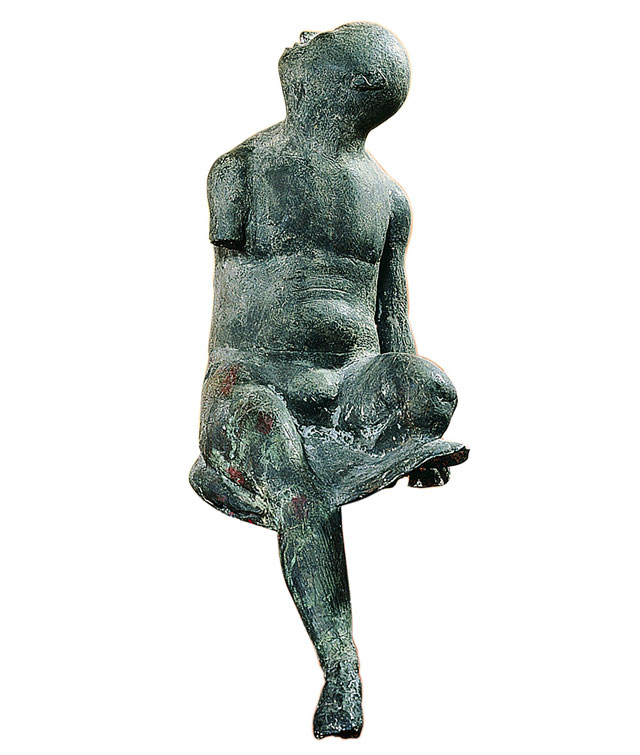 During the war years, Marini had to work on a smaller scale and he began to model terracotta and ceramic horses and riders, which he painted in bright colours or stained. Their broken surfaces conjure the idea of archaeological finds, once more looking back to pre-classical sources. Marini drew inspiration from publications on Greek terracotta and Etruscan sculpture (found in his library), as well as from memories of his visits to the Museo Archeologico Nazionale in Florence.

After a section considering Marini’s sculptural portraits – again evidencing the influences of cubist decomposition and expressionist deformation – the exhibition concludes with an energetic room full of Marini’s emblematic Jugglers and Riders, contrasted with Etruscan warrior sculptures, Three Standing Figures (1953) by Henry Moore, and the painting Woman and Dog Playing, Blue Ground (1953) by Picasso, which, with its tussling confusion of arms and legs, flying loose in all directions, comprises an interesting counterpart to Marini’s studies for Miracle (1953-54). A curious omission, however, is any work by Alberto Giacometti, whose whittled-away-at figures express a comparable state of 20th-century angst to Marini’s heavily chiselled forms. 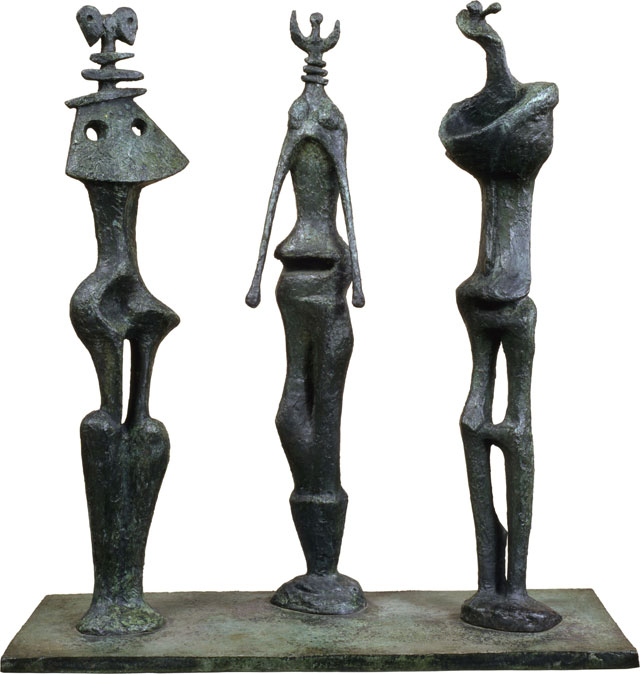 The final work on show is Miracle-Composition (1957-58), which neatly brings together a number of Marini’s key reference points in one united dialogue: reflecting back on Etruscan imagery, while simultaneously moving beyond the figurative tradition; deconstructing his subjects in a post-cubist, planar manner, while honouring the geometry of Gothic style. Overall, this is an insightful and enjoyable exhibition honouring the vast output of an artist who all too often gets pigeon-holed for just one strand of his work. 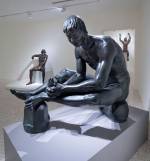