Magnus Plessen: ‘I try to undo or confuse any preconceived ideas while working on a painting’

Magnus Plessen: ‘I try to undo or confuse any preconceived ideas while working on a painting’

The German artist talks about his latest show at White Cube in London, which includes paintings done in the past two years as part of his continuing project, 1914, looking at the horrors inflicted on first world war soldiers 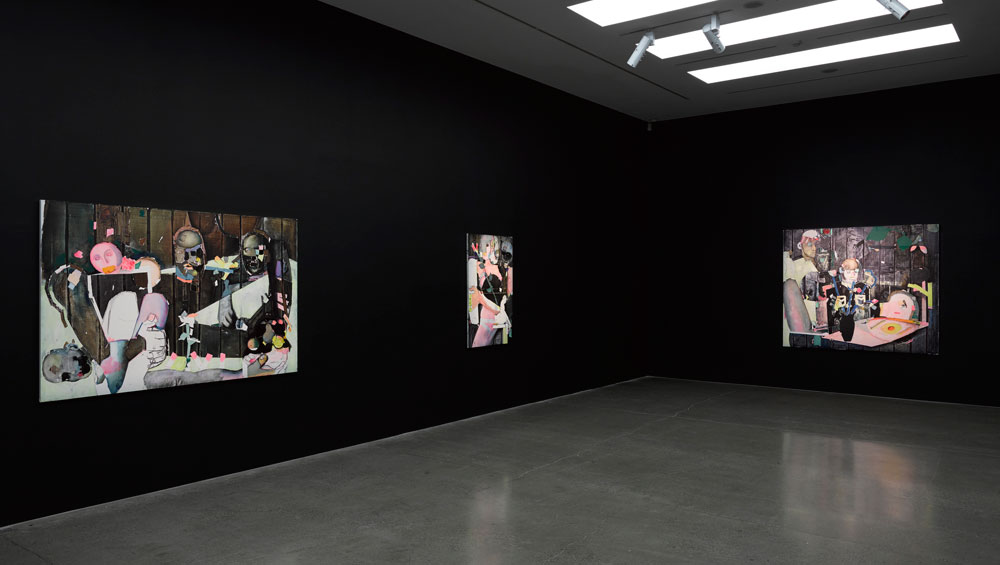 The German artist Magnus Plessen was born in 1967 in Hamburg and now lives and works in Berlin. His work deals with the fluidity between abstraction and figuration, and he creates lively surfaces with a plethora of materials, including tape, paint and collage. As well as participating in a number of group shows, he has held solo exhibitions at the Rose Art Museum, Brandeis University (2014), the White Cube, London (2012), the Art Institute of Chicago (2005) and the Pompidou Centre in Paris (2004). His latest show, The Skin of Volume, which explores the trauma of war and disfiguration, opened this month at White Cube Mason’s Yard, London.

The Skin of Volume is part of an ongoing project entitled 1914. Plessen was motivated to start it after seeing German pacifist Ernst Friedrich’s book War Against War!, which showed graphic photographs of the devastating injuries inflicted on first world war soldiers by automatic weapons. Much like the photographs, Plessen’s work is both haunting and compelling.

Jessica Draper: The Skin of Volume runs until January 2017. Could you tell me a little about the show and your relationship with the White Cube?

Magnus Plessen: The Skin of Volume is the fifth exhibition in my ongoing 1914 project. I intend to continue to work on this project until 2018. Jay [Jopling, White Cube’s founder] and Susan [May, the gallery’s artistic director] were very supportive of the project right from the start. All I had at the beginning was the desire to open up a black hole in my paintings that would suck in representation and remove it from sight – creating a kind of blind representation. The gallery's support mattered a lot to me, especially since, at the beginning, I had no painting to prove my ambition.

JD: The work for this latest exhibition, which has been made over the past two years, is a continuation of your series 1914, which explores the devastating injuries suffered by soldiers during the first world war. What brought you to this subject matter? It makes me think about the futurists, and in particular Umberto Boccioni, who looked at themes of mutilation and the machine against man. Which artistic movements do you most identify with?

MP: I think my initial motivation to start on this project was shock and disbelief. When I first saw the photos of common soldiers with facial injuries in Ernst Friedrich’s book War Against War!, I found it almost impossible to look at them. I couldn't believe that someone could be alive after being wounded this badly. There is nothing anatomical about the faces in the book. They are a complete mess – no mouths, no chins, no noses and, still, I found eyes that looked at me. I had to close the book, but I could never forget the eyes of those soldiers that looked at me with pain and resilience.

JD: What prompted you to continue with this series. What themes have you continued to explore, and why?

MP: I had Friedrich's book in my studio for more than 15 years and never thought I could add anything to the photos by painting the soldiers with facial injuries. When I finally started to work on my series, I realised that, especially by using lively colours, I could create images that, unlike the photos, are not dominated by physical pain. My paintings make it possible to find out slowly about the devastating effect war has on the human condition.

JD: Your use of colour is an interesting immediate difference in these latest works. There is an element of human fragility in your work, and I am interested by your use of colour, which, especially in the earlier 1914 series, was perhaps more muted. Now, we are seeing a bolder use of colour.

JD: Images such as Untitled 23 (2016), which shows a nude pregnant woman with a string of plaited DNA emerging from her stomach, remind me of Hans Bellmer’s anti-Nazi images. Do your works have a political impetus, and is there anything political in showing them now in London?

MP: I always liked Bellmer's photographs. I believe that I was aware of them more in an aesthetic way. In fact, that is true for many things that I felt drawn to in the past. I felt moved by them, but never understood their historical background. Researching my 1914 project – especially reading many field reports written by ordinary soldiers – helped me to understand the political, social and personal motivation of the so-called expressionist generation better.

Dadaism in Berlin was – apart from its artistic output – a political movement that was influential for a lot of people who never thought of themselves as artists. One of them was Fritz Perls, a German Jew who fought in the first world war, lived through the November revolution in Munich and Berlin, and much later became the co-founder of Gestalt therapy. He was involved in dadaism in Berlin and was close to the German philosopher Salomo Friedlaender (known as Mynona). At the heart of Gestalt therapy stands the figure/ground principle. Once a Gestalt (this can be anything from thirst to fear) steps to the foreground, it needs our organism's full attention to be completed and closed. This is necessary to make space for the next Gestalt that comes up. If this doesn't happen, the unclosed Gestalt will bind energy that the organism is in need of to efficiently solve other emergencies, which continuously pop up.

At the time of the first world war, soldiers were given no psychological help. Those traumatised and unable to function were forcefully sent back to the trenches, sometimes a particularly bad part of the front. The concept of trauma didn’t exist when this most violent and destructive catastrophe took hold of the world. I believe that, in many cases, the Gestalt of the first world war was never closed and got passed on from generation to generation until today.

JD: Do you have any rituals that you follow while you work? What is your working pattern like? How and where do you find inspiration?

MP: I am in the studio at 8am and work every day.

JD: Your works are like collages. How do you conceive of each work? Do you have a composition in mind?

MP: I try to undo or confuse any preconceived ideas while working on a painting. Every day, figurative elements – such as a vase, for instance – are cut out of cardboard and taped directly to the canvas. Once I have an object that I like, it may appear in several paintings. I choose objects that are ease to identify, to give my images a minimum of likelihood (by this, I mean that the onlooker can relate the image in front of him to something he or she has seen or experienced). Once I begin to make out an image from what I have gathered on the canvas, I will confuse it by rotating the canvas to find out what other image might be in this constellation of objects by looking at the canvas from another orientation. As this can go back and forth several times, it can become very confusing. This process comes to an end when I push the painting through the eye of the needle and an unknown image appears from what I have laid out on the canvas. An example of this process is Untitled (24) (2016), which started as a landscape, then turned into a portrait with the male figure standing so that the belly of the female figure becomes the man’s belly and chest, attached to him in a strange way. In the end, I decided on a third orientation, with the woman’s head up because it reminded me of Narcissus.

In Untitled (30) (2016), two orientations were kept open right until the end, and it was difficult for us during installation to cut out one orientation. We decided on the landscape one, but I am sure the painting will be exhibited in the portrait orientation in another context.

JD: Tell me about the materials you use in your work and how you choose them?

MP: Some of the materials I use have a functional identity. Tape, for instance, is ideal to hold something temporarily in place. Knowing that the vase is held in place by tape gives its appearance credibility and saves me from having to paint a table for the vase to sit on. Even if the original pieces of tape are painted in the final work, the functional identity has been transferred to the image in the process.

JD: You have talked about “a layer beyond that of coherent figuration or narration without having to cut out representations altogether”. Have you always thought like this? Where does this conceptual thinking come from?

MP: When I saw the images of soldiers with facial injuries, I had the feeling that the lost body parts continued to exist: one could call this phantom pain, but this is not how I feel about it. It's more like matter in outer space can disappear into a black hole. It becomes invisible for us, but still exists.

The disrespect and indifference that those who started and conducted the war showed to the physical and psychological integrity of the fighting soldiers and civilians made me question further our belief that subject and object are to be regarded as divided. Many soldiers talk about losing the ability to distinguish between living and dead comrades. When I started to read about quantum mechanics, this helped me to understand my assumption better. What if time and space, and all the objects that appear in this constellation, are a construction of our mind, rising from another dimension when we interact with the world and falling back into it when we interrupt this interaction?

If it were true that the world, as we have mapped it out in territories held in place by a time and space continuum, is an abstraction from another dimension, problem-solving in exclusive categories becomes pointless. Just to name a pair that has been dominant in the context of painting: abstraction versus figuration.

JD: You have explored the theme of the pregnant nude in this exhibition, which I believe has also inspired the title of the show The Skin of Volume. Can you talk about how you have engaged with this archetypal theme? And why it has become the title?

MP: My wife and I are expecting our fourth child very soon. Raising four kids in this totally confused and violent world is challenging, yet incredibly rewarding. The Skin of Volume refers to the fragility of growth and hope. Think of a balloon or a soap bubble. The skin so thin and fragile, yet the feeling on the other hand when we see them moving in space is so uplifting and full of hope.

JD: Are you working on any new projects at the moment?

• Magnus Plessen: The Skin of Volume is at White Cube Mason’s Yard, London, until 14 January 2017. 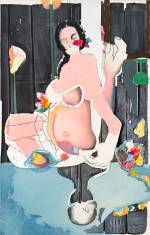