Italy’s first all-digital history museum, M9, has opened across from Venice. With its sleek, ceramic-tiled buildings and inspired public spaces, its architect, Sauerbruch Hutton, has made quite a statement 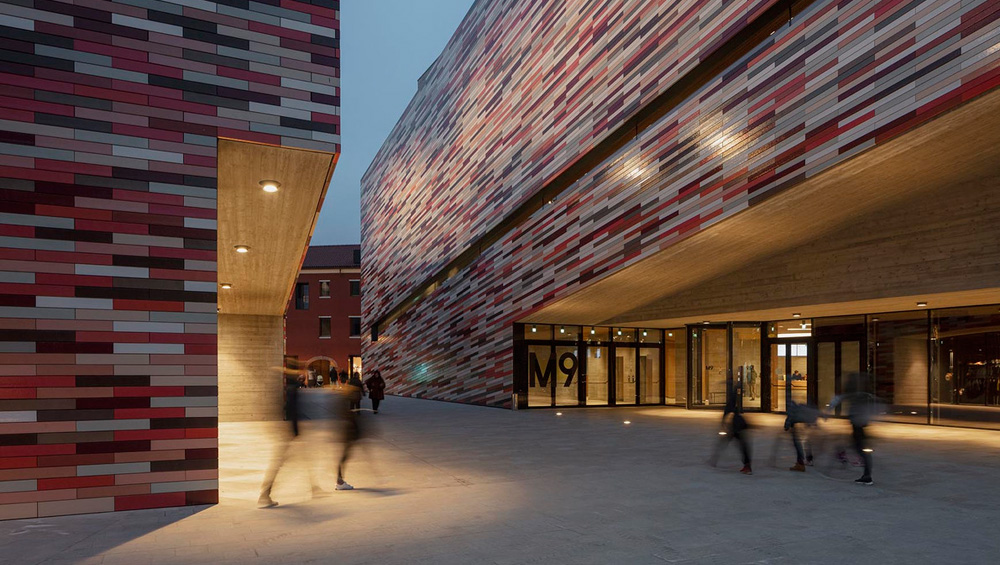 The M9 Museum has landed in Mestre: an alien concept from the outset. For starters, there is the €110m investment for a cultural destination in an area that, apart from its low prices, has little appeal for tourists compared with its infinitely more glamorous neighbour, Venice. Yet more unusual, it is one of Europe’s first artefact-free, entirely digital museums (M9 is dedicated to Italian 20th-century history). Furthermore, it looks unlike any other museum: a thing of sharp planes, unusual protrusions and angles, featuring few windows above ground-floor level; the walls clad in capes of colourful ceramic tiles, instead. 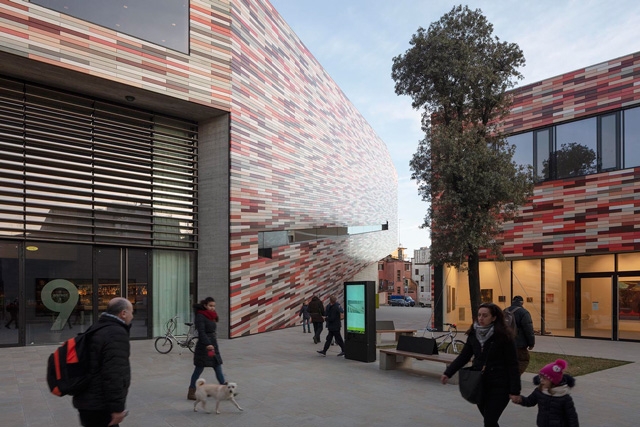 But, like all invading species wishing to make friends with the indigenous hosts, through mimicry of aspects of its surroundings the museum signals its benign intentions: the ceramic tiles echo the terracotta, pinks, silvers and ochres of the surrounding townscape; and it is split in two parts so it can offer all the facilities required of a 21st-century, state-of-the-art, digital museum, without dwarfing or dominating its neighbours. Inserted into the odd selection of buildings in this central spot - the 16th-century convent, Santa Maria delle Grazie, 18th- and 19th-century stabling, 20th-century shops and office blocks - it somehow looks equal parts extraordinary and complementary.

When Berlin-based architectural firm Sauerbruch Hutton won the competition in 2010 to design not just the museum but a new cultural quarter, its scheme was chosen because of the thoughtful ways in which it opened up a previously deadlocked site. The convent was almost derelict: appropriated 100 years ago by the Italian military, it had been turned into barracks and sealed off from the public. Now, Sauerbruch Hutton has created a pedestrian link from Mestre’s central piazza (Piazza Erminia Ferretto) to the town’s main thoroughfare Via Cappuccina. Although Mestre may be generally regarded as unlovely, it is home to the vast majority of those who work in Venice’s tourist industry and the surrounding docklands. Strategically, it is extremely important; with an estimated 90,000 people living in the Mestre area, and 250,000 people said to live within it and its immediate neighbouring municipalities, it is Italy’s densest conurbation. Sauerbruch Hutton’s proposal to bring this bit of town back to life includes providing not just new thoroughfares but new shops and cafes at ground level throughout the site’s various new and refurbished structures. 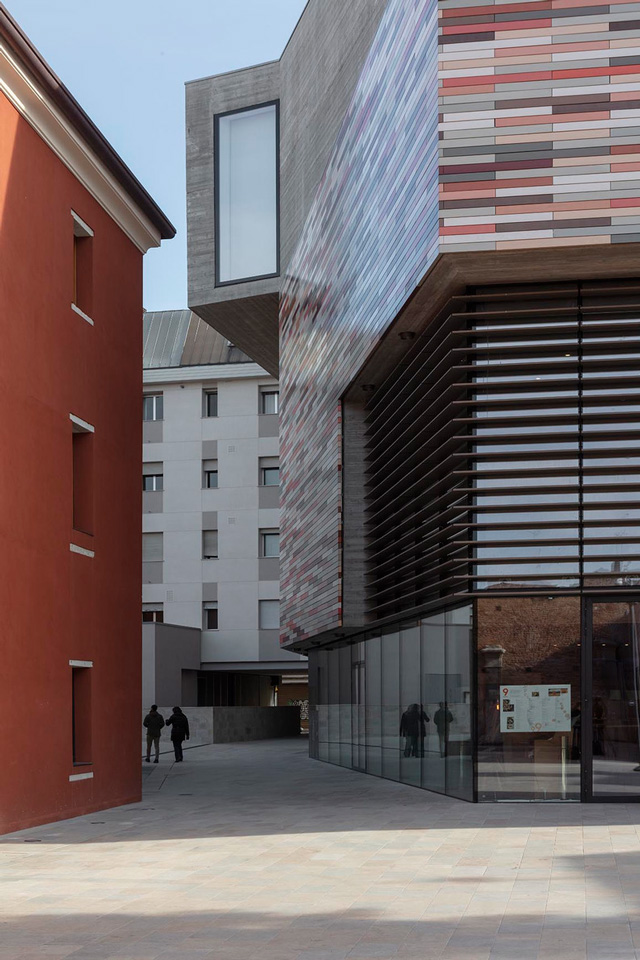 The main thoroughfare across the site is a north-south diagonal pathway that revives an ancient route through the convent’s courtyard, and extends it between the M9 Museum and its smaller companion building, which Louisa Hutton refers to as the “Administrativo”. By splitting the museum into two segments, back of house and front of house, Sauerbruch Hutton was able to clearly demarcate this new street, while reducing the bulk of the museum building into more manageable chunks. The Administrativo building has offices on the first floor and the main delivery bay on the ground floor. All equipment and supplies are transferred to the main museum building via a basement route under the new pedestrian street. 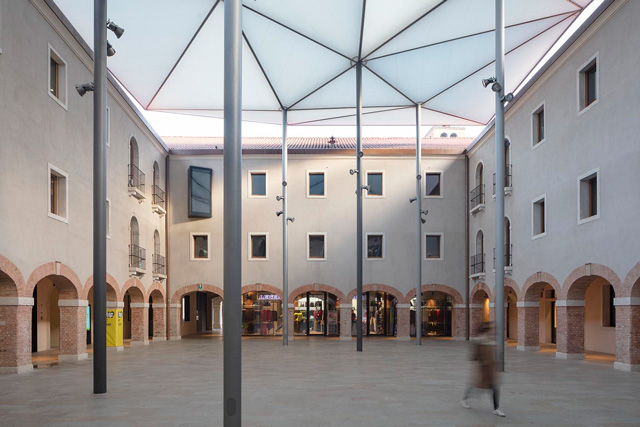 In addition to these two structures – effectively, one conjoined building – Sauerbruch Hutton has refurbished and repurposed the convent, restoring as much of the material as possible and retaining the quality of the original. Its courtyard – newly weatherproofed with Sauerbruch Hutton’s light-touch polymer parasol – becomes a new public piazza, ringed with small shops and cafes, while the first and second floor are now attractive co-working spaces. The aim is to bring creative and digital businesses to the quarter.

Two further buildings have been constructed, from concrete, on the same footprint, and echoing the form of two previous stable buildings. One contains all the mechanical and electrical plant that powers the convent, so as to keep that ancient roofline intact. The other is given over to a cafe and retail spaces.

In this arrangement of buildings and pathways, gateways and entrances, Sauerbruch Hutton has tried to replicate the patterns and forms of older parts of Mestre. Louisa Hutton says: “The main thing was the urban scheme, to fit the whole mass of the buildings into the urban tissue, and parallel with that comes the uses, the cultural uses, the informal spaces.” 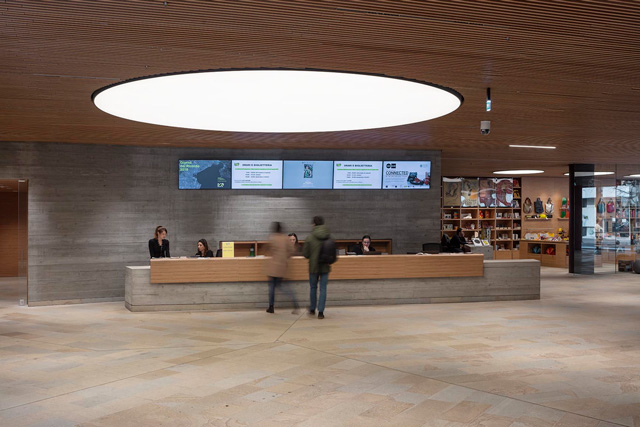 The life of the museum is displayed, as much as possible, in such a way as to invite public engagement. All along the ground floor there are windows – the entrance, the spacious lobby/media lounge, the shop and, more unusually, on either side of the auditorium’s triangular exterior. Now, those using the busy shopping streets, who previously had only a brick wall to gaze at, can see into this handsome space, its seats stepping down to the basement in generous diminishing curves. 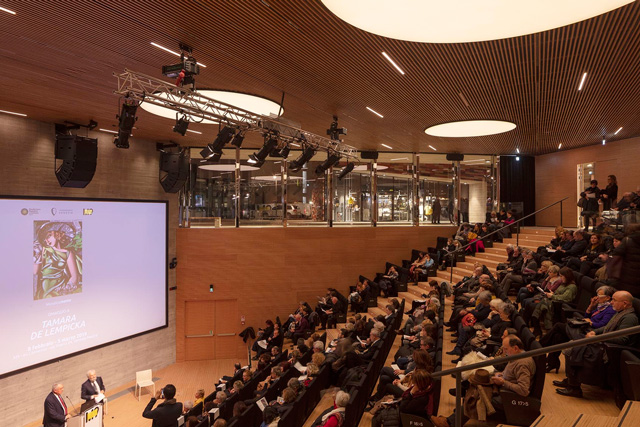 The auditorium is geared up for all manner of the latest digital screening technology (including Oculus Rift), in the hope that it will attract some screening, or conference business from Venice’s various biennales. The sprawling media lounge next to it, which extends from the reception, and the generous lobby at the auditorium’s base, with cloakroom and WC facilities, are as handsome, inviting and spacious as any glamorous Venice Film Festival gathering could desire.

So much for the base of the building. At its top, there is a spectacular gallery space, liberally washed in daylight from vast linear rooflights that alternate with impressive 40-metre beams that keep this 1,200-sq-metre space column free. Given its quality of light, its capacity and its state-of-the-art environmental standards, it is undoubtedly, as Matthias Sauerbruch claims, “probably the best exhibition space in Venice”. 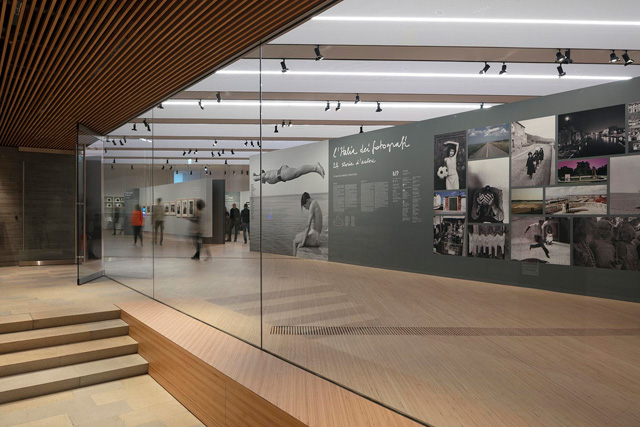 Sandwiched between the ground and top levels are two floors of “black box” exhibition space, also 1,200 sq metres apiece. Here, in a surprisingly effective and enticing layout choreographed not by Sauerbruch Hutton, but Padua-based architects GrisDainese, are all the themed areas of the museum that narrate Italy’s journey from a largely agricultural, highly traditional and church-bound country to one of the most vibrant contributors to 20th-century arts, from design, architecture, fashion and films to cultural bonanzas for film, architecture and art. There is a careful choreography of technology as well as subject matter, via an absorbing array of screens, VR headsets, interactive consoles, projections, holograms and monitors.

But what the building does so well is counterbalance the ephemeral nature of its content with a delicious solidity. A palette of wood, stone, ceramics and concrete reinforces the building’s tactile, haptic qualities: raw, shuttered concrete, trachyte-stone floors, the exterior’s ceramic tiles and the warm wood used in the ceiling and handrails, add a touch of humanity as well as permanence. Thanks to these materials, and the gracious scale of stairways and halls, the building feels like a thing excavated from rock, rather than conjured from thin air. Emerging from these darkened exhibition spaces into thoroughfares drenched in natural light would seem to be the perfect antidote to screen-dazed eyes. 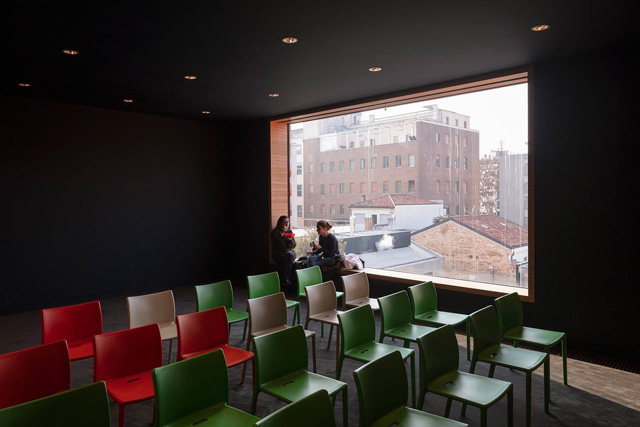 There is also a poetic sequence of vistas arranged into and beyond the museum. Vistas are almost all focused on the surrounding streetscape. This is true of the spectacular sculptural slanting window that draws the eye up the lower staircase levels, offering first the richly coloured ceramic tiles of the museum’s smaller companion opposite, and then the rooflines of Mestre. But my favourite view has to be the generous picture window that sits within the second-floor teaching space (the Aula Didactica). Set deep into the exterior wall, it reveals the rich terracotta and ochre townscape, whose tones sing all the more vibrantly against the room’s deep, inky-blue paintwork.

There are also structural gymnastics worth celebrating – the uninterrupted plane of glass that sits within that first, slanting stair window, and the unbroken roofline of the 200-capacity auditorium: Sauerbruch points to where a structural pillar stands above this ceiling, supporting the three exhibition floors. Thanks to the skills of the Milan office of global engineering firm SCE Project, it was possible to direct the weight from that pillar along steel beams that cross the ceiling and come down to frame each ground-floor window. 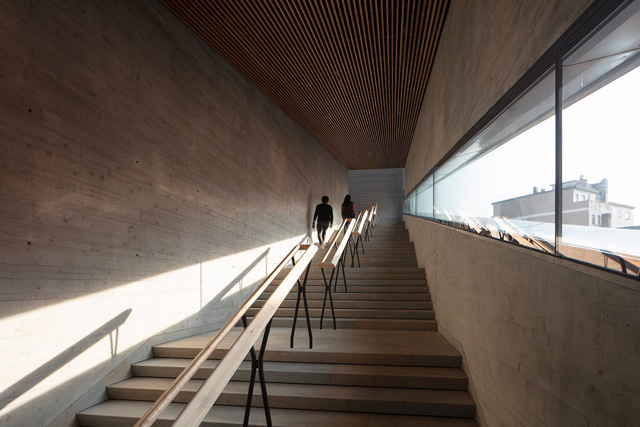 Given the quality of these buildings, their materials and finishes, it is supremely impressive that all this was achieved for a budget of €110m (across the whole 25,600-sq-metre scheme, including the convent). Actually, it is impressive that the project got finished at all. There have been many grand civic projects commissioned in Italy over the past decade that have never seen the light of day. Funding might materialise and then vanish, vaporised by spurious consultancies, feasibility studies and suchlike. The atmosphere of distrust this has generated made for a rocky ride from press and public alike during the project’s eight-year gestation, says Sauerbruch. “Mestre has always been treated quite badly and its reputation is terrible. For something like this to happen here, it’s a big thing.”

It is with palpable delight that Hutton and Sauerbruch walk around these increasingly animated new streets and structures they have conceived and delivered for their client, Fondazione di Venezia. And it soon becomes clear that others share that delight, with warm congratulations extended from all those we meet, from stonemasons to restaurateurs. Hutton is clearly moved as she recalls a woman who came up to her at the opening and said: “Hai fatto una cosa bellisima – you have made a beautiful thing.” Indeed they have. Let us hope that the people of Mestre – and the wider Venetian region – recognise its value and, above all, use it. 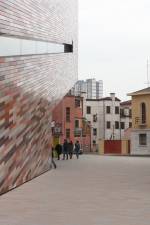 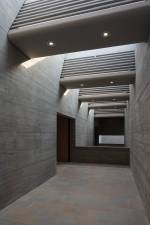