Louise Cattrell: ‘I think you can use your memory to create that 360-degree panorama’

Louise Cattrell: ‘I think you can use your memory to create that 360-degree panorama’

Originally from Glasgow, Louise Cattrell likes to travel. She has had artist residencies all over the world, in places as diverse as Switzerland, Bulgaria, America, Sri Lanka and the Australian desert. The landscapes that she paints – in oil, but weakened with turpentine to the point of looking almost like watercolour – are from memory and often end up as an amalgamation of different places. Some of her canvases are large, but she also challenges herself to work on a smaller scale, capturing and containing the vast expanses of the sea, the sky and the mountains within the frame.

Cattrell spoke to Studio International just before the opening of her exhibition, Another Place. 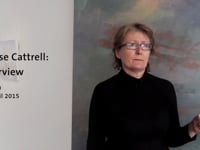