The Dutch sculptor Lily Lanfermeijer discusses tableware, colonial histories and the passing of patterns between continents 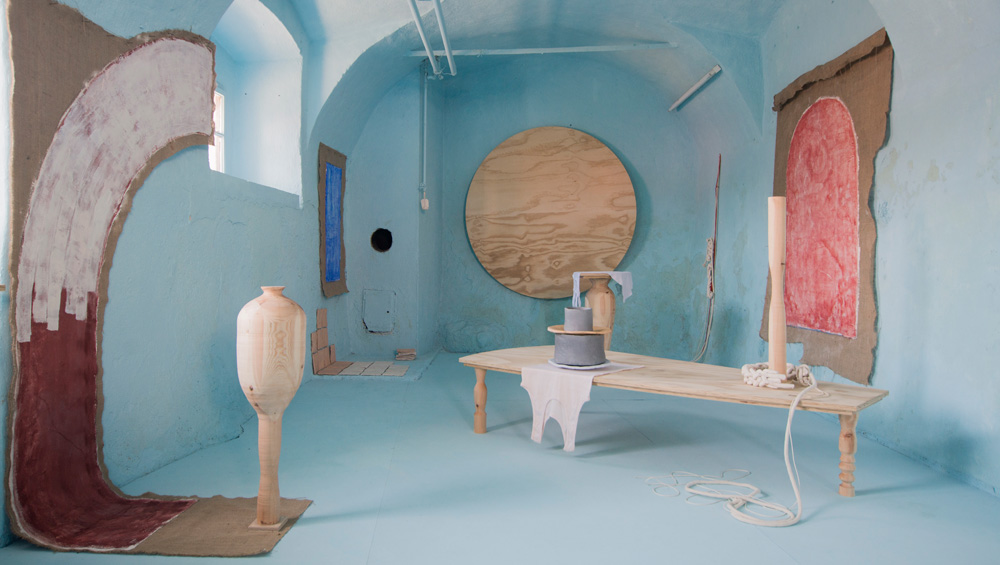 I meet the Dutch sculptor Lily Lanfermeijer (b1990, Amsterdam) in the small medieval town of Novo Mesto in Slovenia. The artist, who is known for distorting the functionality of household objects, is there for the opening of Fotopub Festival 2018, a Slovenia’s oldest art festival, an international festival of contemporary photography that began in 2000, and which took place this year from 30 July to 4 August. Lanfermeijer  created an installation as part of a group show, Lost in Depiction (2018), curated by the Dutch artist Eva Hoonhout. For the exhibition, the basement of an old painting shop was refurbished in a dusty blue, from floor to ceiling. To enter was to drift into what felt like an empty swimming pool, and the colour created an entrancing backdrop for works by three artists: Lanfermeijer, Caz Egelie, who is also from the Netherlands, and Dan Adlešič from Slovenia. Our conversation took place within the confines of the blue basement. 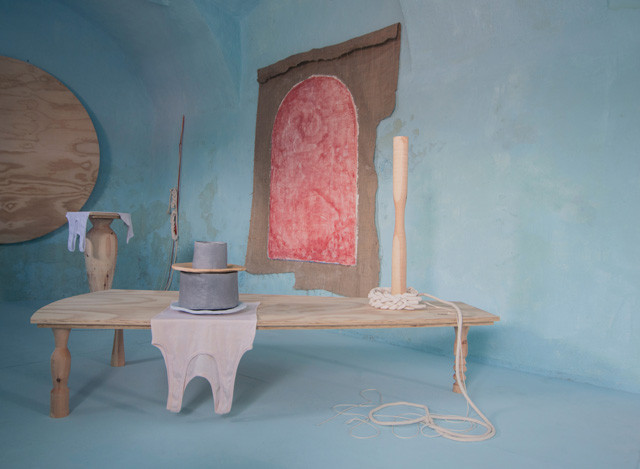 Izabella Scott: Your work often plays with craft and household objects and their functionality. In this exhibition, Lost in Depiction (2018), the most salient works are two table-like objects – one at the centre of the room, another hanging on the wall. There are also various table legs, some of which look like vases, which have been placed around the room. What draws you to the table – to building and deconstructing it?

Lily Lanfermeijer: I like to work with the table as an object and subject. Tables are social objects and they evoke a certain kind of interaction. People sit around tables to eat, talk and relate to each other. In this show, I have made a number of flat table tops and legs, all of which are made from untreated pine. The wood has a certain textuality, like moire, which I neither added to or took away from. Sometimes, I don’t attach the legs, because I want the table tops to be regarded as sculpture. 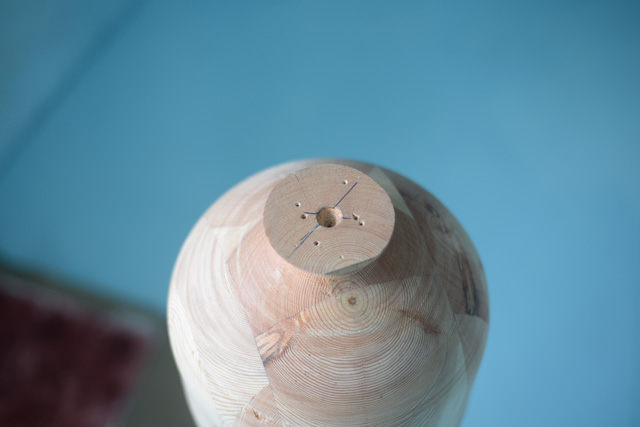 This installation actually came out of a former exhibition, Faux Syrup Angel (2018) at Punt WG Amsterdam, where I created a series of wooden shapes called “Act Tables” that could be connected to each other in different formations. These were sculptures that could easily become table tops. So, for this exhibition, I screwed on the legs to turn them into tables. 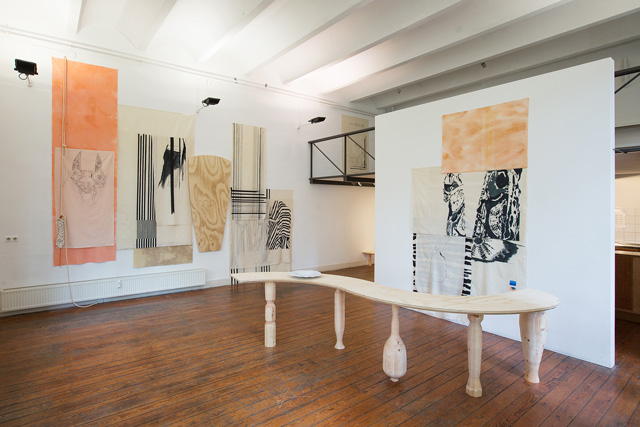 IS: Do you think of these objects as potential tables – or objects that can perform the role of tables –when you require them to?

LL: There are many roles for them to perform. The type of table is important, too. If the legs are short and the table is close to the floor, how does that change its function? A salon table has a very different purpose from a round kitchen table, or a conference shape.

IS: Do you make them all by hand?

LL: I use a chisel on the turning wheel, which is a furniture-making machine: I shave off pieces of wood by pressing the chisel against the pine on the rotating lathe. This is a traditional way of making table legs and wooden articles for the home. For this particular exhibition, I was thinking about European folklore – the transmission of learning, which is passed on through generations. These crafts and their forms are often loaded with meaning, such as that to do with latent histories, empire or religion. I became interested in how shapes evolve – mimicry, the passing of function, and the movement from the useful to the ornamental. 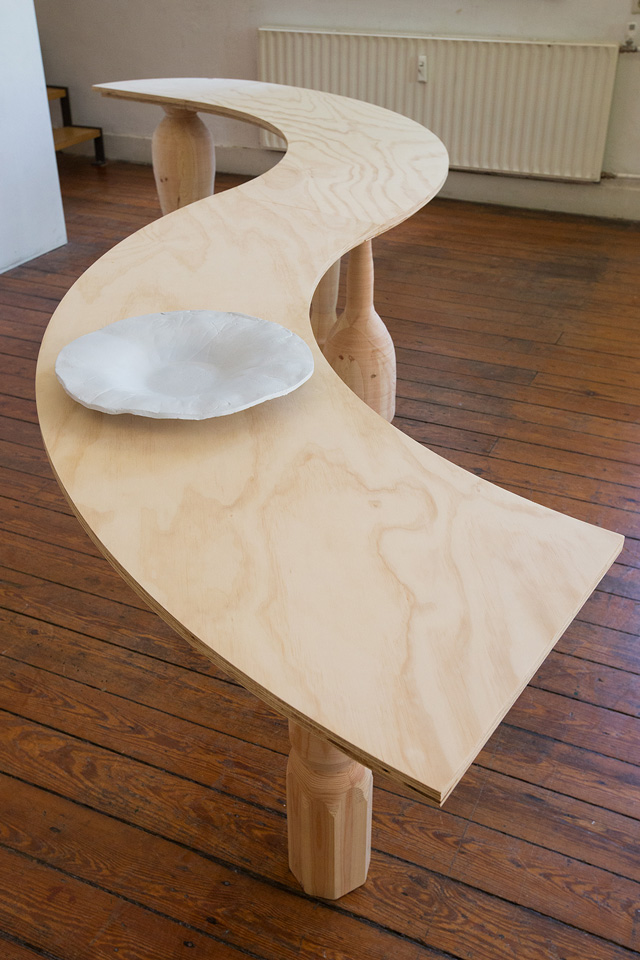 IS: As I look about the exhibition, I can see the repetition of certain shapes. On the wall are four frescoes, which you have painted on to hessian sacks – simple blocks of colour in ochre, Prussian blue and white. The shapes of the frescoes are outlines of the table tops. Is this what you mean by “the passing of function”?

LL: I like to see objects morph between different materials – from clay to wood to fresco – and to challenge their functionality in the process. It was during my education at the Gerrit Rietveld Academie [an international university of applied sciences for fine arts and design] in Amsterdam that I became interested in the fresco. It’s a very old and delicate technique using egg tempera mixed with pigment, which is painted directly on to a layer of plaster. In this case, the sacks take the place of the wall: they have a coat of plaster on their surface, on to which the frescoes are painted. I am trying to use the frescoes as backgrounds for the installation itself. I wanted to create a sense that all the elements in the show are hosting something else. 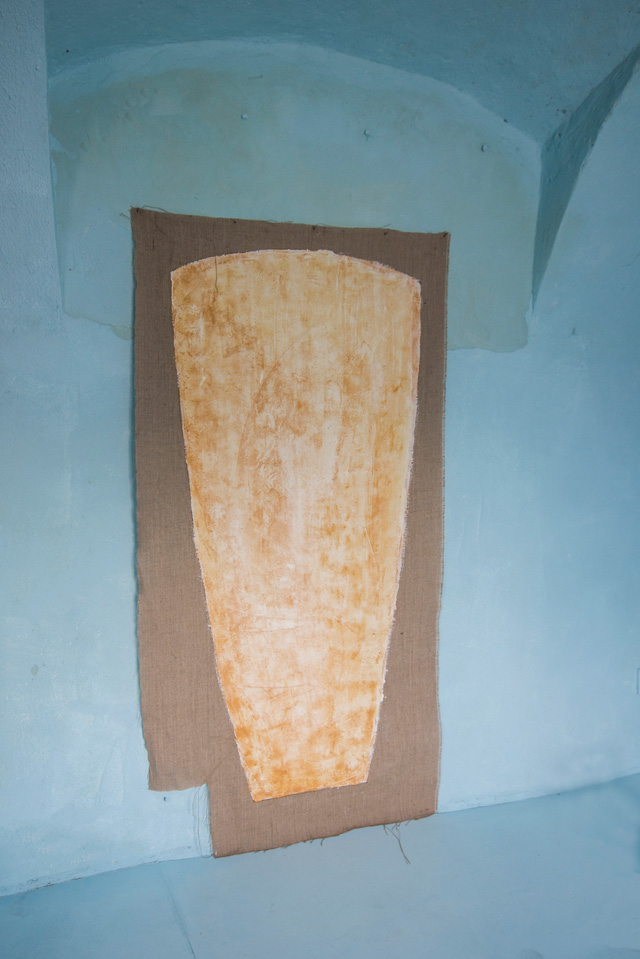 IS: “Host” is a pertinent word to use: tables, of course, are host to dinners and their guests, but there is also a sense that every object in this show – each table leg or plinth – sits somewhere between sculpture and function. Everything makes way for something else.

LL: At one end of the installation, there is a wooden vase-like object with a shirt on top. At the other, a shirt with a clay urn on top. There are hosts and guests, according to the way each object is placed. The room also plays a kind of host. It was made into a temporary gallery for Fotopub, and it has been painted blue for the occasion. It was once a painting shop, and it has unusual proportions: curved walls, a barrelled roof and arched windows. I find the architecture very sculptural and, in my mind, it relates to the fresco, or at least the spaces frescoes tend to occupy, such as in religious caverns or vaults. Frescoes are often made with very delicate brushes, but for my own I used large rollers, so as to blank out the space. As I mentioned, these frescoes are the background for the other works in the installation. I wanted to leave the brush marks and the pencil marks, to give a sense of the act of making – to show that I am telling a story, a fiction. 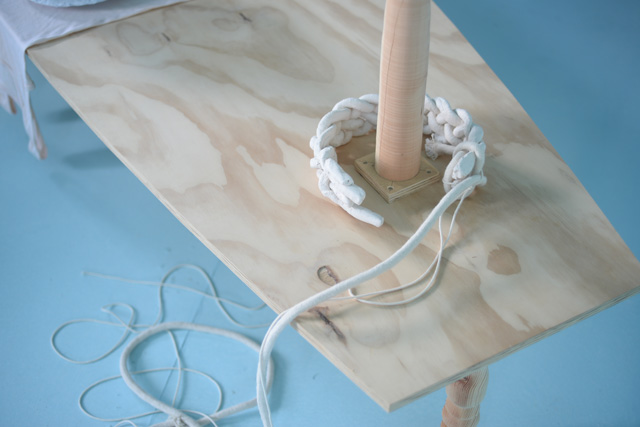 IS: There are several plaited ropes, one on a table top, another hanging from the wall. There is a ritualistic feel to the ropes, as if they have been used in a kind of ceremony or rite.

LL: There are many forms of braiding – the braiding of bread, or the braiding of hair, scouts’ rope-knotting. Just like other kinds of folk crafts, the braiding of bread is encoded, imbued with certain hidden meanings, often spiritual. The braids I made are ornamental, but they play with function in that they are made with ceramic combined with actual rope. 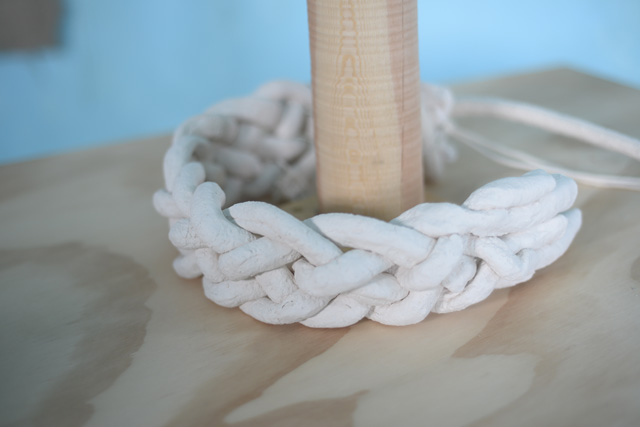 IS: As you connect braiding and folklore, I think of the etymological crossover between weaving and writing. Are you interested in the linguistic roots of braiding, folklore, storytelling and myth?

LL: Folk techniques have so much content stored within them – not just linguistic, but also spatial and aesthetic. In December 2016, I spent a month in India on a residency initiated by the Textile Factory, collaborating with two craftsmen, Niranjan Jonnalagadda and Pitchuka Srinivas, from Andhra Pradesh. I learned the technique of block-printing and kalamkari, which is a hand-printing and hand-painted cotton textile technique. The process of kalamkari and block-printing is extremely slow, in which natural dyes are cooked in different temperatures and washed between the several layers in the building up of the eventual image. 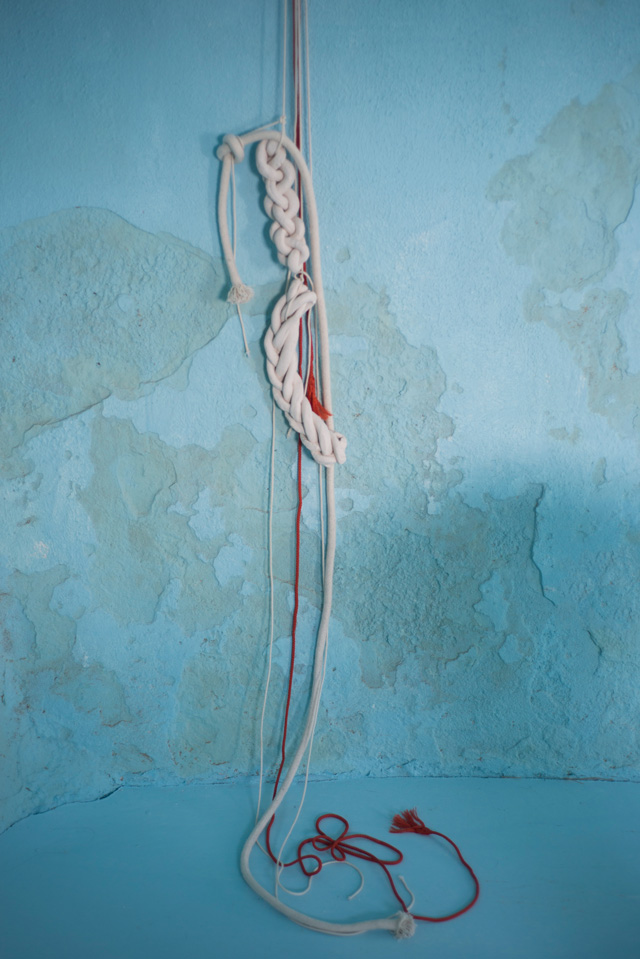 As part of my research, I was looking at the history of the Dutch East India Company and the 17th- century fabric trade between India and the Netherlands. During this period, there was an exchange of patterns, and some of those that came from India were later used in traditional costumes and home furnishings in Friesland, in the north of the Netherlands. In some cases, symmetrical bell and goblet-like shapes from India were combined into geometrical patterns for borstlapjes traditional bib-like undergarments for boys. In other instances, the depiction of a tree of life surrounded by birds, which originated from the south of India, became used in plaids and wall hangings in standard interiors in the Friesland town of Hindeloopen. During the exchange, the flowers in these patterns were altered to the tastes of the European market at that time – for example, roses or wreath-like shapes became very popular. These are still very much part of this national identity in the Netherlands.

IS: There are several shirts about the room – a T-shirt, a vest – which seem to signal the body. The braids could be mistaken for hair. Are you trying to evoke the body?

LL: I am looking for a specific social interaction. In this case, the table that is hung on the wall is “inactive” – a pure sculpture – while the second table in the centre of the room is a pedestal. It exhibits objects – the vest you mention, a braid and a wooden leg. I coloured the fabrics with the same pigment that I used for the frescoes, and so the objects in the room are held together by a certain tone, as well as the act of placement, and the scale of the body. 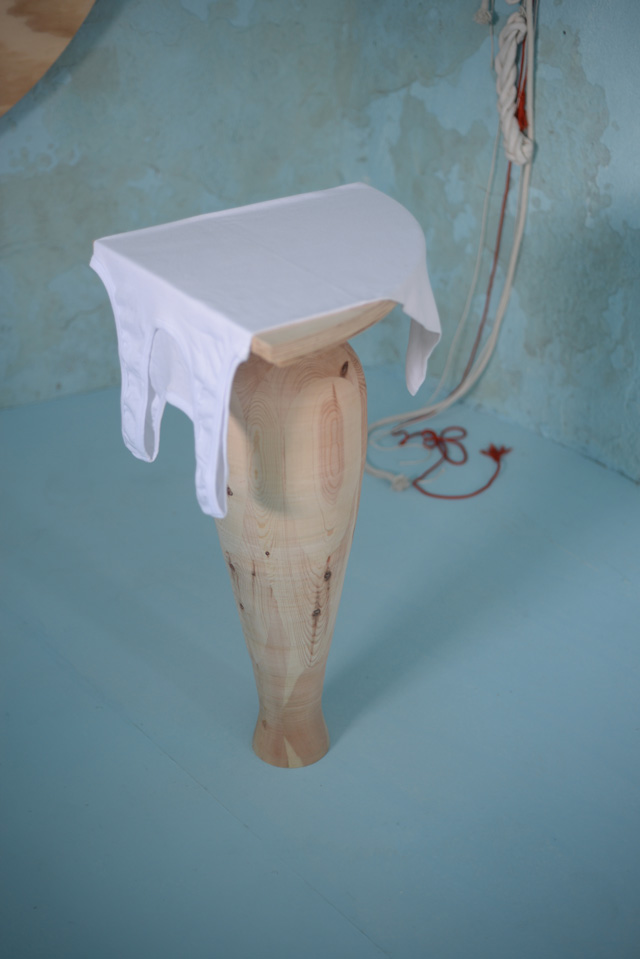 IS: I can’t help but see a parallel between table legs and vases. One object begins as a table leg, but morphs into a vase – so it looks like a vase standing on a thin, pointed leg. Vases or urns have often been compared to the body, particularly the female body – so there is another figurative element here, too. Do these figures, or shapes, have a gender?

LL: For this show, I was looking at the resemblance between making vases on the wheel, and making table legs with a chisel on the lathe. There are table legs that look like vases and vice versa. I studied ceramics for half an exchange programme at Sint-Lucas Academie in Gent, and it was there that I really learned about clay – making pottery vases on the wheel, experimenting and understanding the plasticity of the medium. It was through this experience that ceramic became one of the central elements in my practice. I love how mouldable it is, how I can really play with form. I work intuitively, and I don’t follow particular histories of design, but, rather, I want to find the shapes while making. There is a shape hidden in each bit of wood, something you can draw out and let evolve. 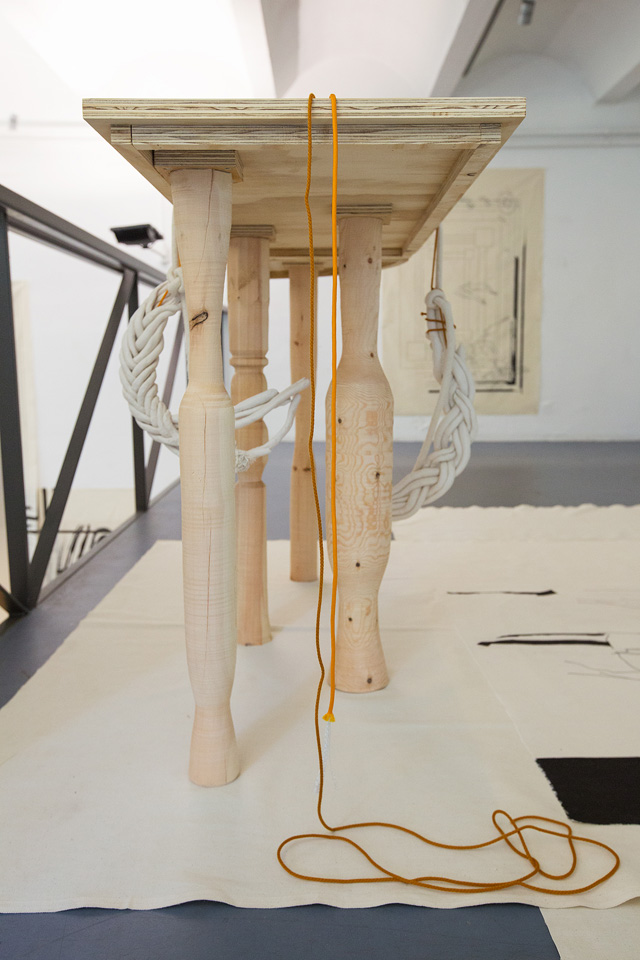 LL: The clay objects were rolled rather than made on the wheel, and, as you point out, they are assembled in stacks. Each of my exhibitions grows out of the last. I use the same elements and translate them into new materials, so that you can see a new story in them. My previous show at Punt WG in Amsterdam was made in collaboration my sister, Mila Lanfermeijer. She makes textile paintings, while I make the sculptural work. For this exhibition, we became interested in the intimate act of exchange that is an inherent part in the use of applied techniques. Different processes of transmission, through material, verbal or customary form, were our point of departure. My sister created a new series of “layered paintings” through the use of kalamkari, while I made a series of table tops and table legs that changed formation across the exhibition, “activating” and “deactivating” them. 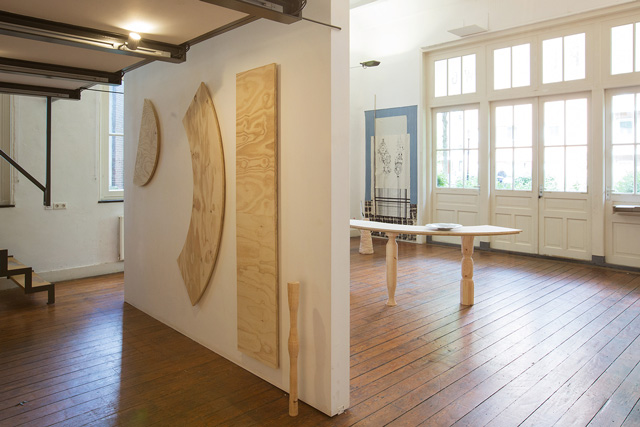 IS: It is interesting that you and your sister became artists. Did you grow up in a creative or craft-oriented environment?

LL: My dad is a painter, so, yes, I grew up with it. I collaborate with my sister often. We put on dinners in Amsterdam, where we both live, collaborating with other artists, for example with a chef named Lia Satzinger, who is also a sculptor. The idea is to use the dinner to show works in progress. Objects for the purpose of the dinner are presented next to works in progress. In the end, it’s about social interaction, storytelling. 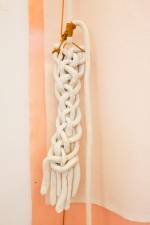 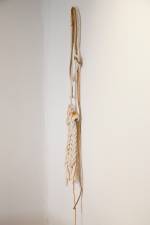 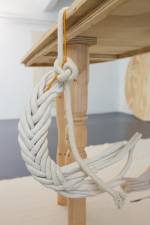