Alongside some of his older works, this exhibition focuses on his new, mostly monochrome paintings, executed in a range of black ink, whose disquieting and confrontational images shift fluidly between the abstract and the figurative 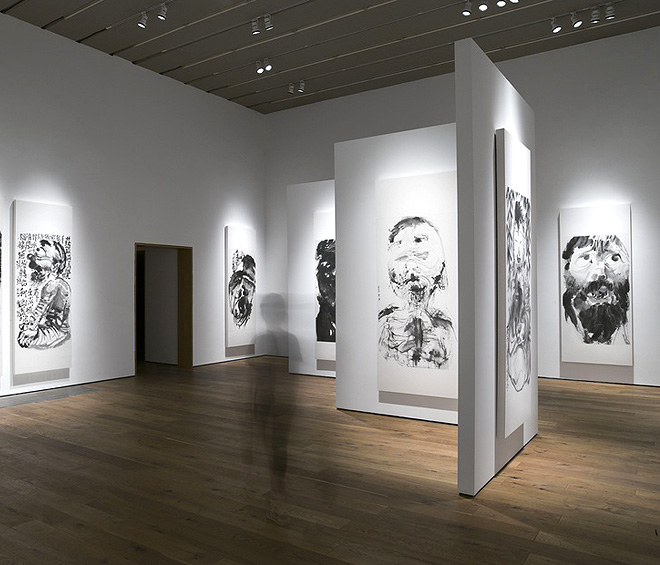 This fine, expansive, well-installed exhibition of Chinese artist Li Jin (b1958, Tianjin) focuses on his recent ink paintings and is accompanied by a video of the artist at work. It is an exhilarating process, documenting the vigor of his attack and the scale of his production, from the huge, bespoke brushes he wields with such assurance to the grand measurements of the paper that is spread out on the floor before him or stretched across a wall. Utterly mesmerising, it is like watching an uncanny dance, the repetitive scratch of the ink’s application acting as an atonal, arrhythmic musical score. It also demonstrates Li Jin’s mastery of his medium and a touch that can be fierce and lyrical, partly controlled and partly alert to the accidental splatters and spread of liquid ink, ready to absorb them. They are reminiscent of Chan Buddhist paintings as well as the paintings of historical artists he reveres such as Liang Kai and Bada Shanren (there is an ironic, eye-catching fish painting, philosophically called Stare of Death (2015), dedicated to the latter), examples of his and other Chinese artists’ ongoing desire to bring ink and paper, the country’s cherished media, into the 21st century. 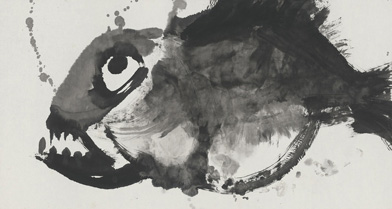 His work has always been an innovative, challenging combination of the traditional and the contemporary, and he is well known for the panache of his colourful, lascivious images from the late 1990s through the earlier years of this century when consumption and a degree of sensuality had been reintroduced into China as acceptable subject matter after a long hiatus, new to a country about to step on to the global stage as a dominant player. Several are shown here and act as a point of departure for his current production. In addition, there are some rarely seen paintings from the 80s and 90s. The opposite of his food and flesh works, they were made when Li Jin roamed Tibet in a kind of pilgrimage, searching for a more intimate, more spiritual bond between nature and the human, between all forms of animate life. Their intensity is a precedent for the work of the past two years. 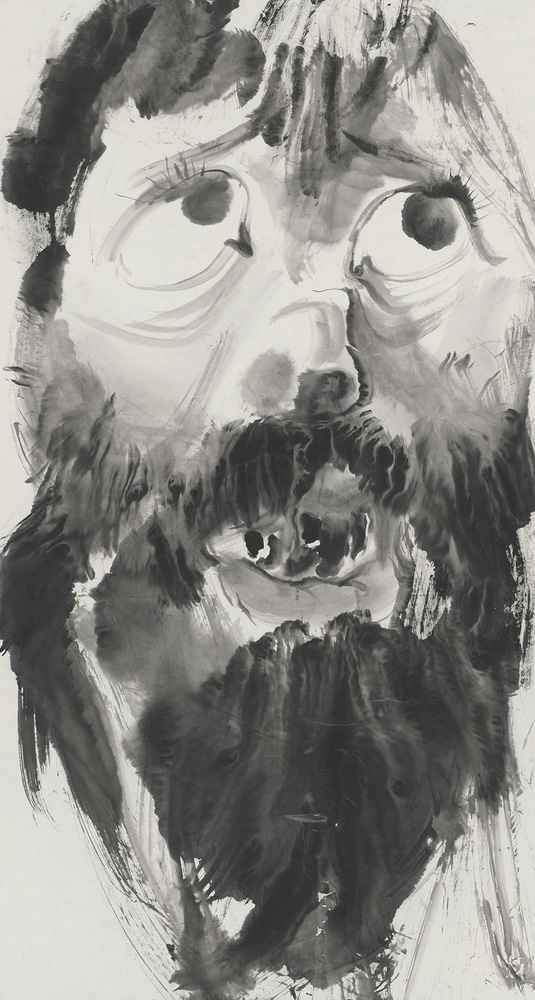 Mostly monochrome, these new works are executed in a range of black ink. While the tonalities are nuanced and beautiful to behold, the images themselves are disquieting and confrontational, similar to the Tibet works. Shifting fluidly between the abstract and the figurative, they are usually portraits or self-portraits with titles such as Unease (2015), Hero (2015), and the monumental Beings in Ink (2016).

Closely framed, they are several times life-sized, often looking directly at the viewer, the faces a vortex of variable strokes that seem on the point of coming into focus or collapsing into a tangle of brushwork. 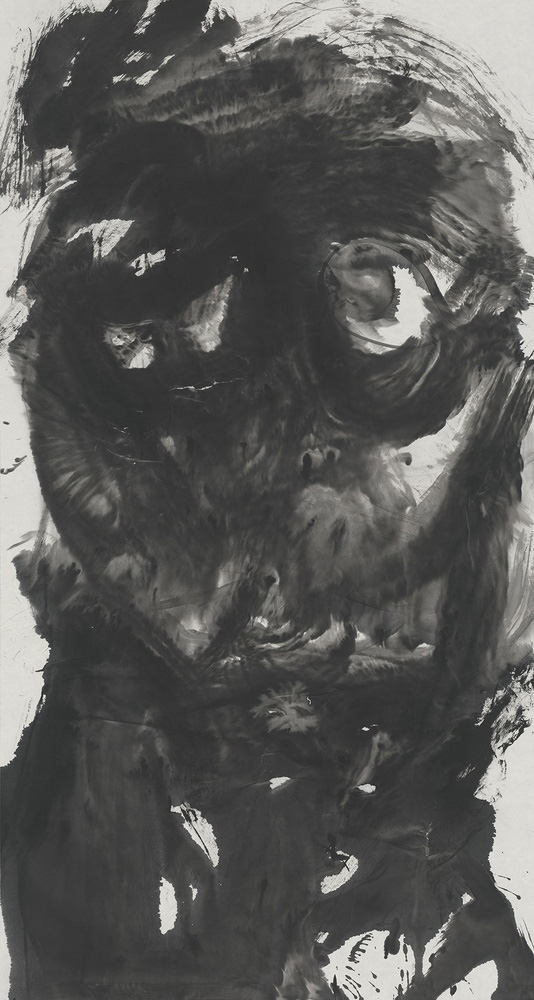 Unsettled Heart (2015) appears at first to be an inchoate whirl of black marks, but then eyes seem to emerge warily from the darkness, conjuring an existential statement about a state of being; or, it might parse as a masked terrorist. Another curious work is a vertical eruption of energised ink, also quite abstract. It divides at the top into three lobes and suggests a human torso with arms raised, a head, perhaps, between them, or a more phallic reading, but then, a look at the mischievous title makes you smile; it’s called Vegetable#2 (2015). 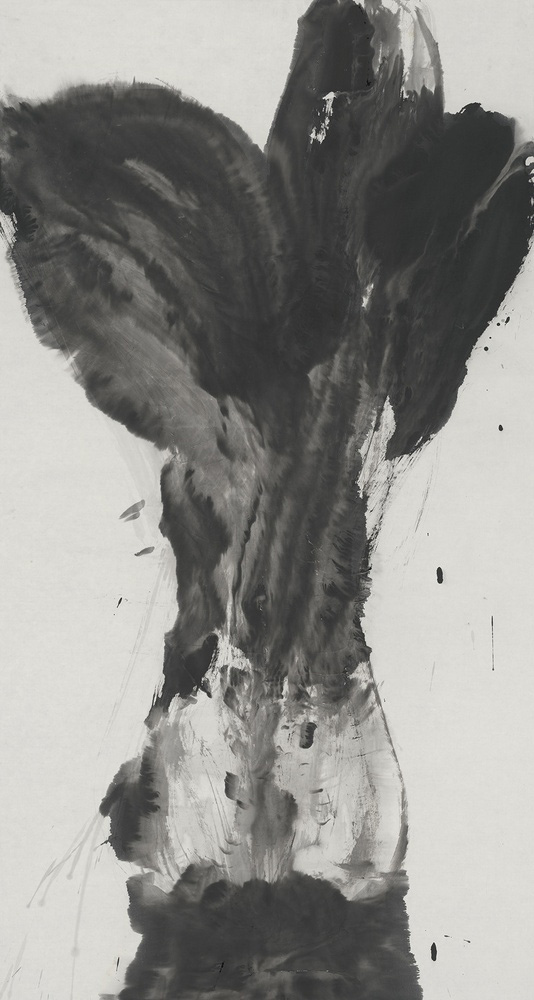 Li Jin’s greatest gift might be his ability to balance the austere and the lush, creating images that are impossible to forget in their hard-charging, whiplashed immediacy. Feeling extraordinarily contemporary despite their sourcing in the past, they possess a reverberant and idiosyncratic potency that will not be lost in translation. 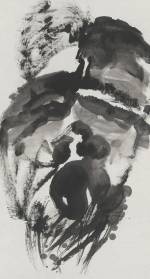 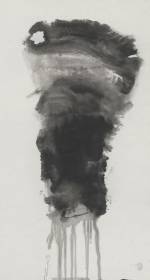